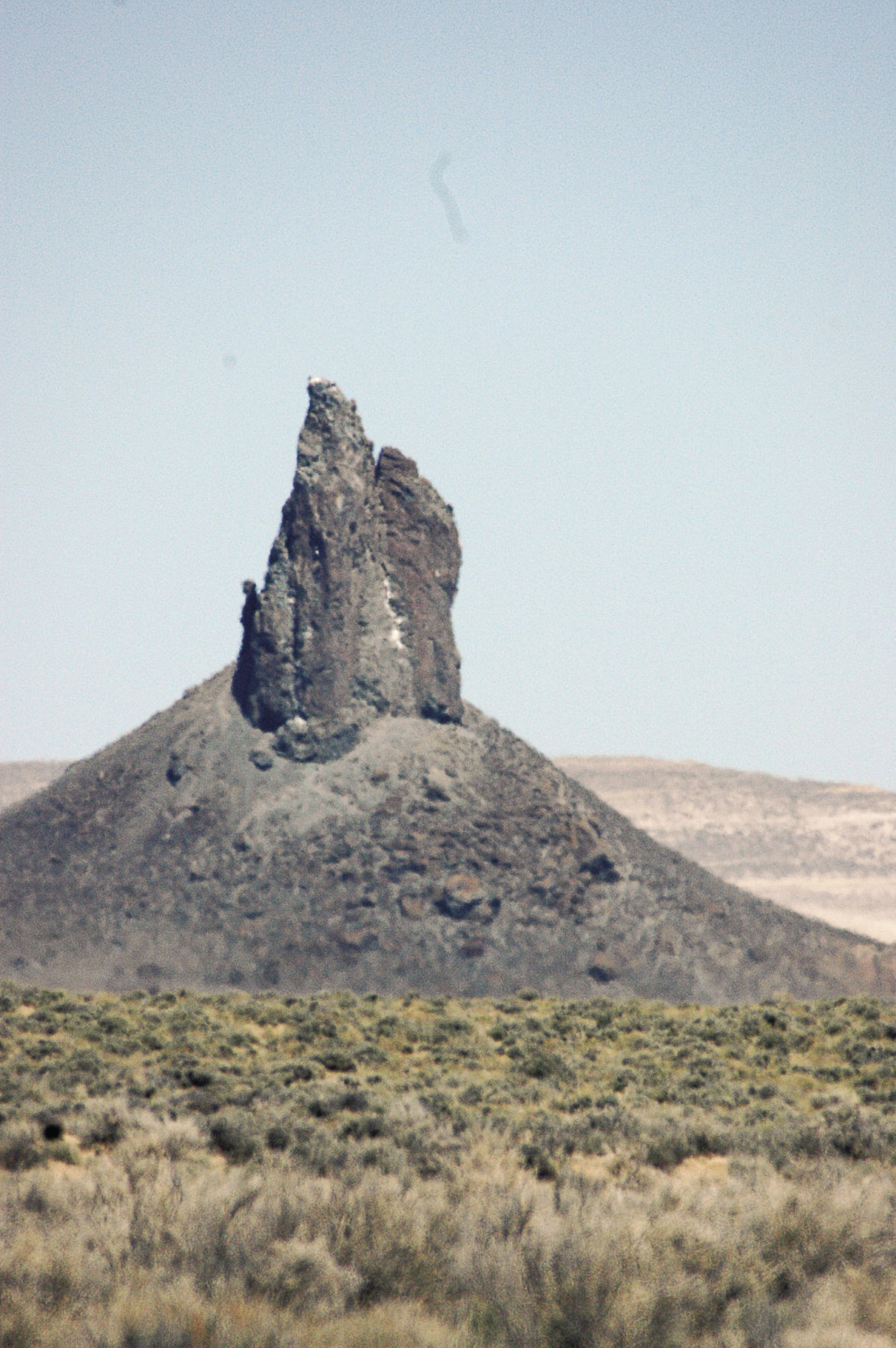 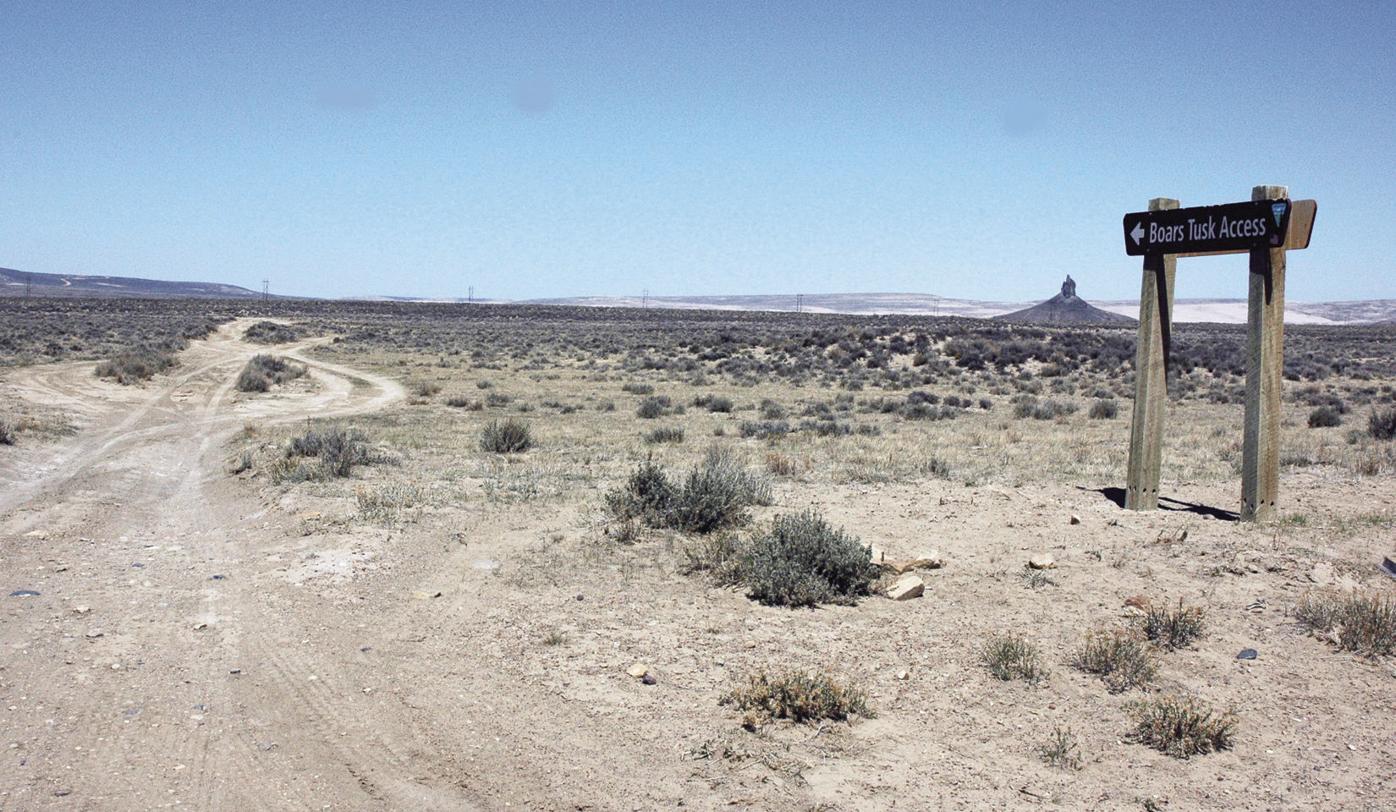 The road access sign points in the direction visitors should take to get to Boar’s Tusk, seen in the distance to the right. The road is a rough two-track.

The road access sign points in the direction visitors should take to get to Boar’s Tusk, seen in the distance to the right. The road is a rough two-track.

It is an enigma.

Boar’s Tusk is an isolated butte within the Rock Springs Uplift in the Green River Basin of southwestern Wyoming. The butte has a peak elevation of 7,101 feet (2,164 meters) and rises some 400 feet (120 meters) above the surrounding Killpecker Creek plain.

Pertermann calls it an enigma because of its composition. The volcanic neck is a type of uncommon volcanic rock-type called lamproite that has its own name – Wyomingite.

“It is green and nobody has yet to discover why that is. It is not something geologists are eager to discover. Why? Because it would be costly to conduct research in such a rugged, out-of-the-way area and scientists are more focused right now on other interests at this time, such as climate,” Pertermann said.

Boar’s Tusk, which is located 26.2 miles north of Rock Springs, is an isolated remnant of a long-extinct volcano associated with the Leucite Hills to the east. Heavily eroded, all that remains of the volcano is part of the erosion-resistant volcanic neck. Rock samples from Boar’s Tusk provided an age of 2.5 million years old.

“Boar’s Tusk has a lot to say about how volcanoes work; the portion that juts out of the desert now was once the magma chamber of a large volcano. Can you imagine how large that volcano would have been? It is mind blowing,” Pertermann said.

People often visit the area in search of precious stones. Pertermann noted that despite the rumours, there are no diamonds here, but several types of semiprecious stones can be found, with some work and a sharp eye.

“What you find here is quartz. Precious stones like amethyst and peridot can also be found,” she said.

According to summitpost.org, Boar’s Tusk also is a great place for rock climbers to test their skills.

“This tower can really be climbed at any time of year, but the roads must be dry to get to it,” the website states. “It’s best to climb in the morning in spring, summer or fall to avoid the heat of the sun and give you the best chance to finish before afternoon storms. Since the climb only takes a few hours an early start isn’t necessary.”

The website classes the difficulty of the climb to not exceed Class 5.4, but due to the nature of the rock, it is advised to bring two 60-meter ropes “as the pitch from the notch to the summit is about 45 meters long.”

From the summit climbers can see excellent views of some sand dunes and the southern Wind River Range to the north, White Mountain to the west and an endless expanse of Wyoming wasteland to the south, according to the website.

Directions: Rock Springs is the closest town to Boar’s Tusk. Exit off Interstate 80 in Rock Springs, drive north on Highway 191 for 9 miles and turn right (east) onto County Road 17/Chilton Road. Follow this great gravel road along the east side of White Mountain for 15 miles to a junction with the Old Highway 191 road heading back to the west. A couple large signs are found here giving various mileages; continue to the east here for an additional mile and then turn left at an unmarked two-track road that heads straight for Boars Tusk. Continue on a slow 3.5 miles towards the base of the tower.