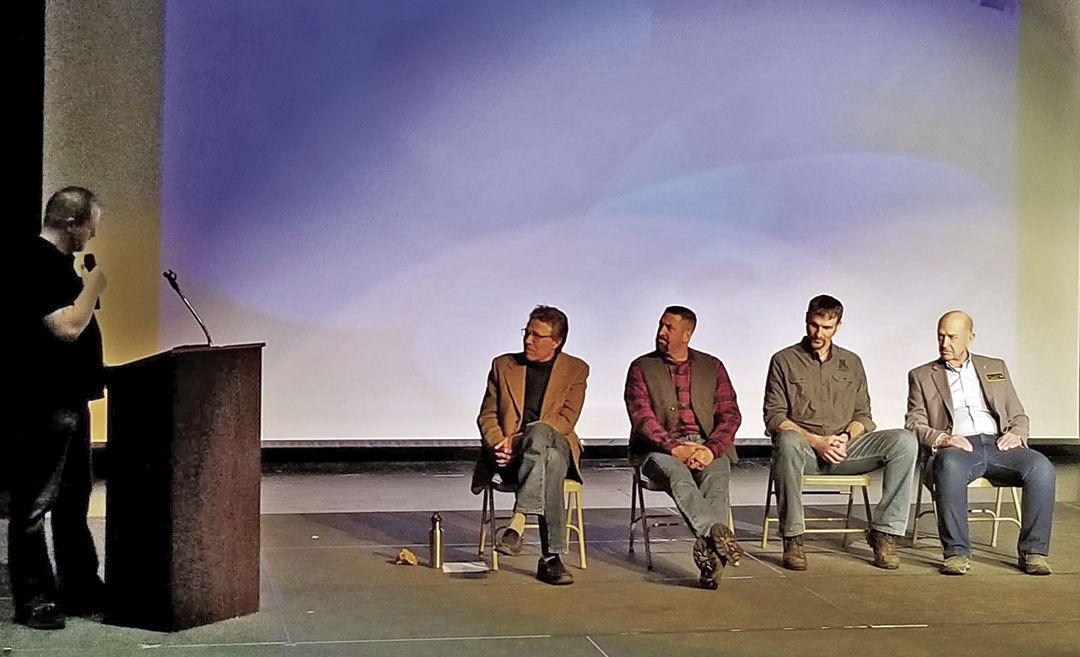 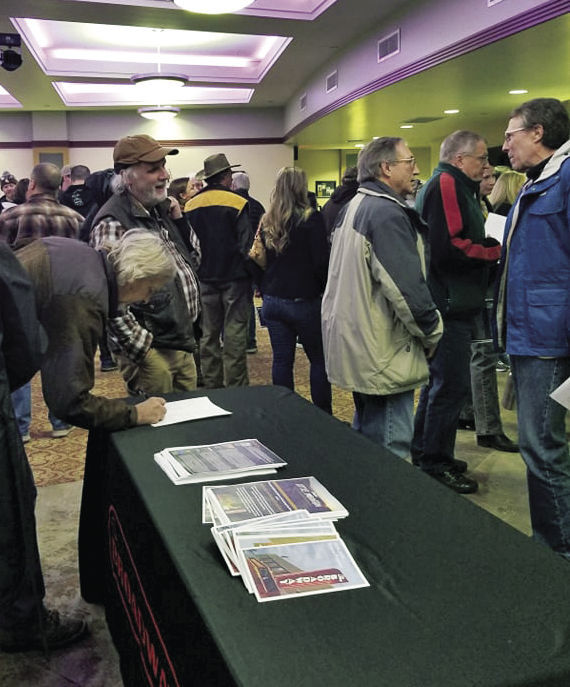 Sweetwater County residents mingled in the lobby prior to the Greater Little Mountain panel, many signing up for GLMC emails and updates.

Sweetwater County residents mingled in the lobby prior to the Greater Little Mountain panel, many signing up for GLMC emails and updates.

ROCK SPRINGS — A crowd of outdoor enthusiasts and concerned residents gathered at the Broadway Theater on Tuesday night to watch a video and hear from an expert panel addressing the ongoing struggle to protect the Greater Little Mountain area (GLMA).

Joey Faigl, co-founder of the Muley Fanatic Foundation and a member of the Greater Little Mountain Coalition (GLMC), introduced the video and moderated the panel discussion. Panel members were Sweetwater County Commissioner Wally Johnson, Muley Fanatic Foundation co-founder Joshua Coursey, University of Wyoming professor and scientist Kevin Monteith and Western Wyoming Community College professor Craig Thompson. Johnson and Coursey have been actively involved with the GLMC and the fight to protect this area, and Monteith and Thompson have both done extensive conservation work and have professional and personal connections to the GLMA.

The video, produced by the GLMC and released last fall, highlights the importance of the Greater Little Mountain area and the desire to preserve it in its current wild state. It features Sweetwater County residents expressing their love for the area and discussing the need for a balance between the development of industries that provide a livelihood for many Wyoming residents and a preservation of the natural wildernesses that residents go to for recreation.

The panel discussion after the video featured a question for each panel member, an opportunity for them to share any additional thoughts, and a question and answer time with the audience.

Panel members explained their main goal is to preserve the GLMA and protect it from being developed by industries such as oil and gas. They discussed the resource management plan (RMP) in development for the GLMA and the importance of community feedback once the RMP is released. The RMP being developed by the Bureau of Land Management will determine how the resources in the GLMA are used and whether they remain protected or are designated for development.

This RMP has been in development for years and has been delayed many times, but it is expected to be released in the spring. Once the draft is released, there will be a 90-day comment period during which the community has the opportunity to comment on whether they agree with the RMP. The BLM’s decisions for the land and the details of the RMP remain confidential until it is released. Due to similar draft plans released in other states and changes happening within the BLM, members of the GLMC are concerned that the plan may not reflect the local voice and include the desired protection for the area. This is part of why they are working so hard not only to talk to influential government officials and agencies but to get community members on board.

Johnson and Coursey both emphasized the importance of community feedback during the 90-day comment period after the RMP is released. This window of time will allow community members to speak out on how they feel about the Greater Little Mountain area and to express their desire to see it preserved. Johnson expressed his wish to see “1,000 comments from Sweetwater County” once the RMP is released to let the BLM know how special this area is.

The panel discussion also addressed the delicate ecosystem in the GLMA and the studies that have been done on wildlife in the region. Monteith is the lead scientist among a team of researchers known as the Monteith Shop that studies large ungulates and the factors that impact their population growth. The Monteith Shop partnered with the Muley Fanatic Foundation, Wyoming Game and Fish Department, and Wyoming Cooperative Fish and Wildlife Research Unit for the Deer Elk Ecology Research (DEER) project. This project studied deer and elk populations in regions including the GLMA.

Coursey explained that part of the GLMA’s importance is how it can benefit studies like the DEER project, since it is a “perfect laboratory” allowing scientists to observe wildlife in areas where industrial development isn’t a factor. Monteith discussed some of the study’s findings on factors that impact deer and elk populations, including the influence of weather on food availability, competition over food, and danger from predators.

During the question-and-answer time, audience members asked how wild horses and other animals impact food availability for deer and elk. Thompson noted that “the land can only support so much.” He explained that “carrying capacity” is the official term for how the land can support all of the various animals that live on it, and consumers have to be managed to keep ecosystems intact.

The problems associated with the wild horse population were a large part of the discussion. Johnson noted he believes wild horse numbers are “out of control” and need to go down. Coursey expressed his agreement, and added that wild horses are “untouchable” because of the Wild and Free-Roaming Horses and Burros Act of 1971, which gives them special protection. Monteith explained that science indicates the growing horse numbers may have a negative effect on the ecosystem. All three panel members expressed their frustration on the government protection of horses and the “public outcry” regarding anything being done to manage the wild horse population — objections that typically come from groups who are not from Wyoming.

In response to audience questions, the panel also touched on issues including Gov. Mark Gordon’s policies on migration corridors and weed and pest control of invasive species in the GLMA.

Thompson also pointed out the importance of preserving the GLMA in order to better study all its features, including its trees and water. He explained that the type of forest growth found there is rare in Rock Springs BLM lands and should be protected. As a water scientist himself, he also noted how little we know about the creeks in the area, since only one study of one creek has been done, which was 50 years ago.

Throughout the evening, each of the panelists came back to their connection to the Greater Little Mountain area and their desire to see it protected in order to make responsible decisions regarding the land.

“It’s our responsibility to be stewards,” Coursey said, explaining the duty of community members to protect special places like Greater Little Mountain that are continually diminishing.

While introducing the GLMC video, Faigl explained that the coalition is not against oil and gas, but members want to find a balance between development and preservation in order to stay responsible.

“There are places we should be drilling,” Johnson noted, “but Little Mountain is not one of them.”

More information, as well as the video shown before the panel discussion, can be found at greaterlittlemountain.org.

ROCK SPRINGS – It is difficult to capture the work that goes into the text and images that appear on the Rocket Miner’s pages.