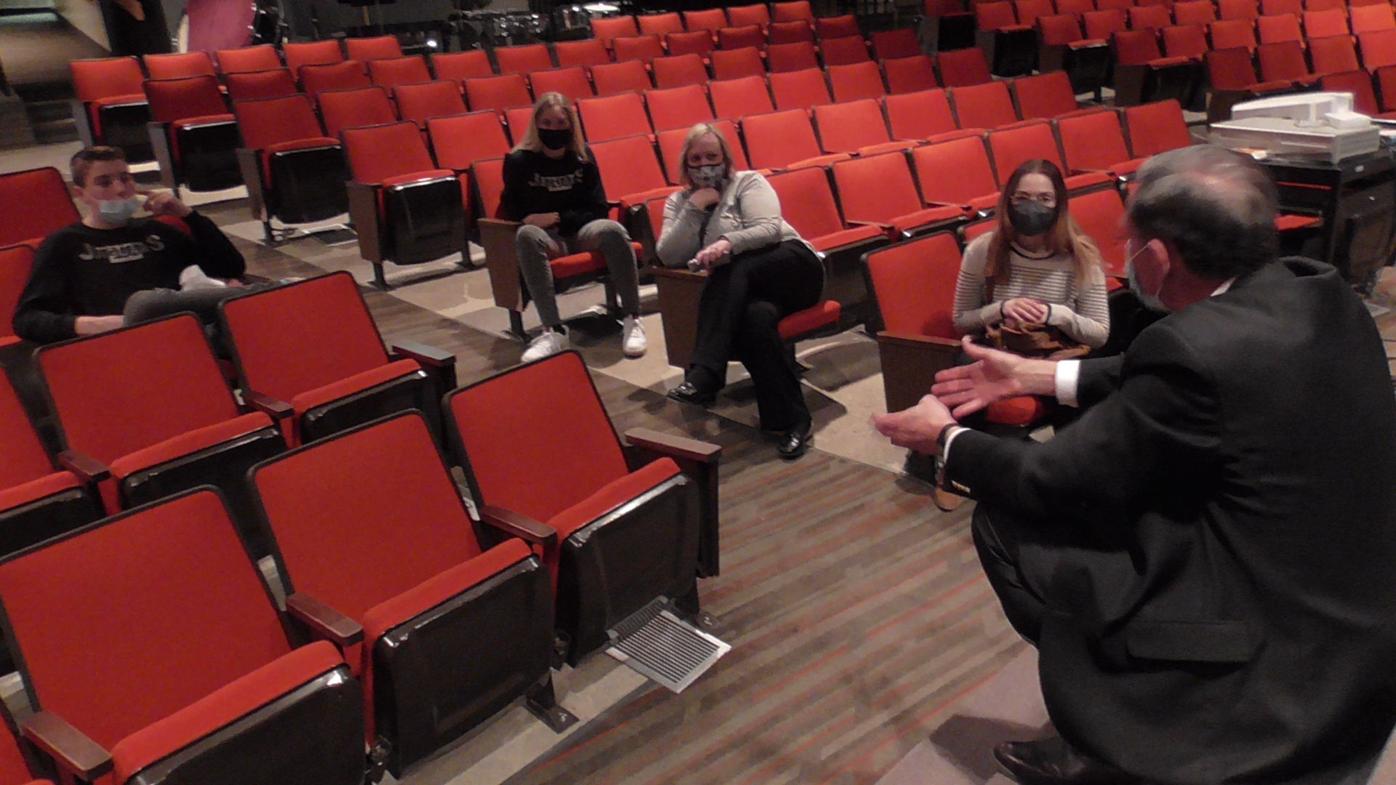 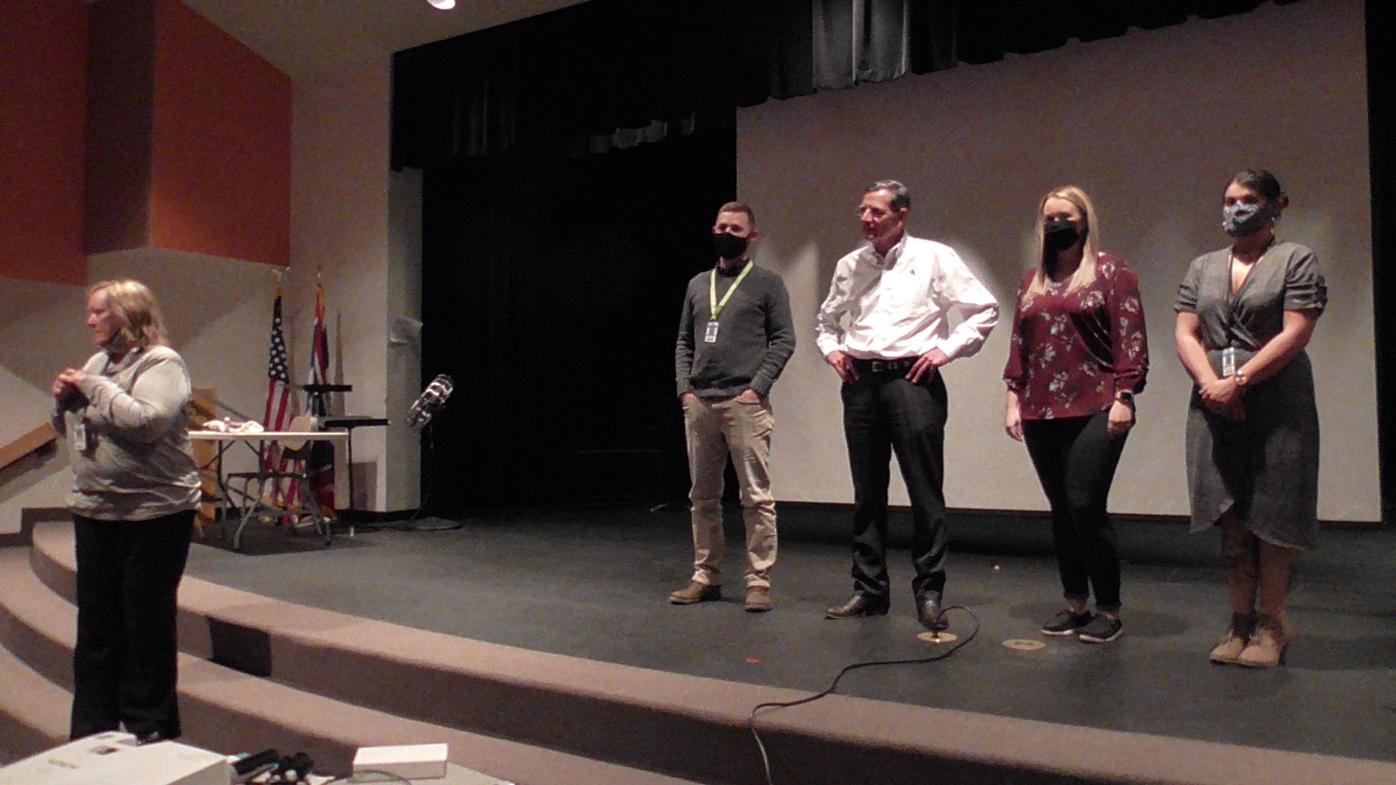 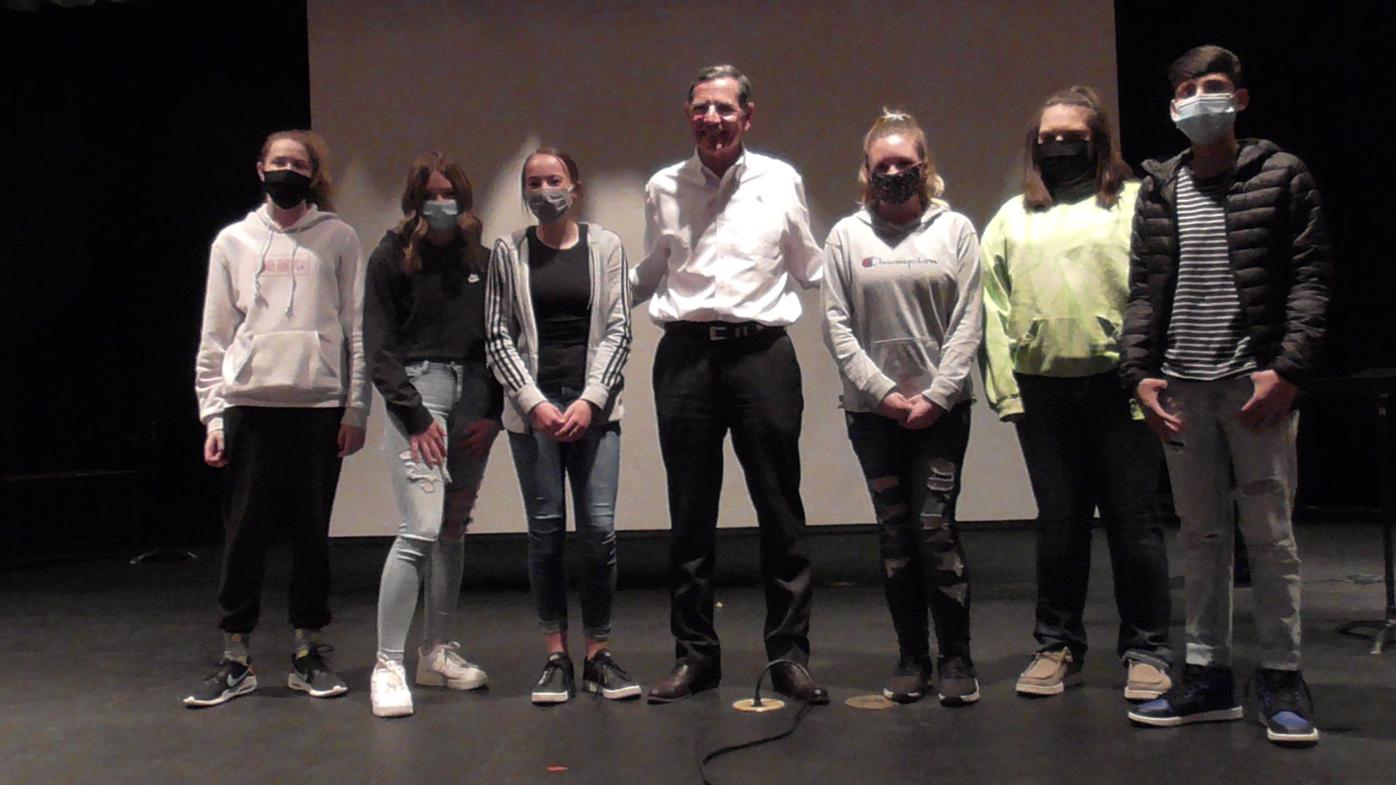 Rock Springs Junior High School students who asked questions of Sen. John Barrasso got to have their picture taken with him at the end of his presentation. Participants included, from left, Bailey Anderson, Teagan Stassinos, Cumorah Shuler, Barrasso, Kaitlyn Wells, Ashlin Majko and Josh Garcia.

Rock Springs Junior High School students who asked questions of Sen. John Barrasso got to have their picture taken with him at the end of his presentation. Participants included, from left, Bailey Anderson, Teagan Stassinos, Cumorah Shuler, Barrasso, Kaitlyn Wells, Ashlin Majko and Josh Garcia.

She said while some of the attendees may have been present with her when Barrasso, R-Wyo., visited Walnut Elementary School a few years ago, she stressed it was a rare opportunity. Jaguar students watching from their seats in the auditorium and at home from their computers took advantage by listening to his presentation and peppering him with questions.

The senator talked about the value of education and educated people. He said when he was a member of the Wyoming Senate, he worked with Tex Boggs, a legislator and former president of Western Wyoming Community College, to create the Hathaway Scholarship designed to help Wyoming students continue their education in state and hopefully remain here after graduation.

When asked how long he had lived in Wyoming, Barrasso said 1983, or longer than most of the people in the room had been alive. After being born in Pennsylvania, he said he “got here as soon as possible.” The senator added his wife had been born in the Equality State.

Another student asked Barrasso what it is like to be in the Senate. He explained there’s a lot going on. He talked about juggling legislative assignments along with constituent needs and all the travel needed to keep up with the two. His trips have included overseas visits to the Persian Gulf to spend Thanksgiving with the Wyoming National Guard.

He said he enjoys the access to information he gets due to his position. “The president wants … ,” are the most powerful words in Washington, D.C., according to Barrasso, but the phrase “the senator wants” can also spur people into action. For example, he said he was recently talking with Bill Gates about nuclear energy.

Barrasso told the junior high school students that presidential transitions are usually followed by changes in policy. He said going from President Barack Obama to President Donald Trump, the country went from outside energy dependence to energy dominance. He said he is concerned the trend will reverse under President Joe Biden, which would hurt a lot of people, including the families of many of his listeners.

He said oil and gas energy should continue to play a part in fulfilling the nation’s energy needs.

When asked what he thought of Biden’s accomplishments so far, Barrasso said it is too early to tell. He told the classes that he thought the Democrats’ coronavirus bills required too much federal spending and that the nation’s border with Mexico deserved more attention. He called the number of immigrants seeking passage into the U.S. a humanitarian and security crisis.

The senator credited the president with doing what he thinks is best for the country, but he said that is not always the best for Wyoming.

The senator said he previously sponsored a bipartisan bill with U.S. Sen. Bernie Sanders, I-Vermont, that provided funding for the roads, bridges, highways, dams and reservoirs that need improvements. However, he said Biden’s package calls for six times the amount of that proposal and includes “lots of liberal social programs.”

Biden has said his bill would be funded by higher corporate taxes, and Barrasso countered that businesses could choose to raise prices and shift the burden to consumers.

While he was on the school grounds, Barrasso was accompanied by student council members Kyndall Turnwall and Sam Eddy who were there to act as guides and answer questions. Upon his arrival, they presented him with a Jaguars mask made by the family consumer science class.

Prior to the assembly, they asked Barrasso if it was hard separating his private life from public life. He responded that it is increasingly hard for everybody. He said cyberbullying is increasing, and that people no longer have the expectation that people won’t see what they post online.

After answering their queries, he got to turn the tables and ask them questions about their classes. Kyndall said her favorite class is welding or physical education, while Sam said his favorite was metals. When they both cited language arts as their least favorite classes, Barrasso said everybody learns differently.

The current 50-50 voting blocks in the U.S. Senate have increased discussions about the use of the filibuster in the chamber. After the assembly, Barrasso was asked to explain the filibuster in terms a junior high student could understand.

A majority vote is usually all that is needed to pass legislation with the vice president able to cast a vote in cases of tie. However, Barrasso said for more than 150 years a standard of 60 votes has been required to pass more substantial bills that would have a “major” impact on the country.

While the 50 Democratic senators can reach a majority with Vice President Kamala Harris casting the tiebreaker, Barrasso said filibusters require the majority party to get at least 10 Republican senators on board. He said those wanting to remove the filibuster that requires more votes are working to “steamroll” the other side and accept laws that no Republican senator will vote for.

He cited former U.S. Sen. Mike Enzi, who said people can agree on most things, and they should leave out the parts that lead to fights.

Barrasso observed that some politicians advocating changing or removing the filibuster previously took the opposite stance. He said Biden voiced his support of continuing the 60-vote filibuster, and Democrat Sens. Harris, Chuck Schumer and Dick Durbin signed a letter calling for its preservation during the term of Trump, a Republican.

Sen. Barrasso said the 50-50 split in the Senate should be taken as a mandate for the country to move to the center.

To see a video of the senator’s talk at Rock Springs Junior High School, see the story at rocketminer.com.