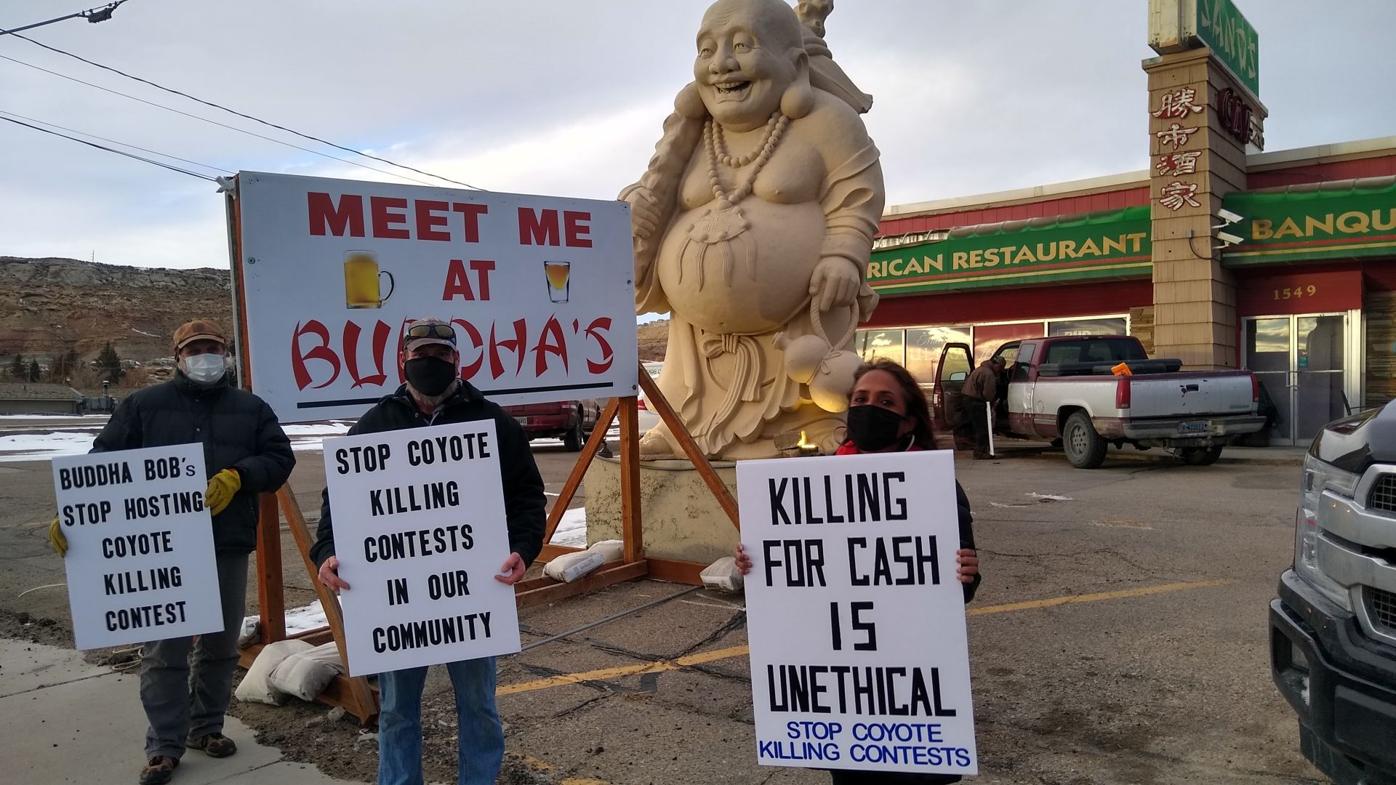 Residents protest outside Buddha Bob’s Bar at the Sands in opposition to a coyote killing contest. 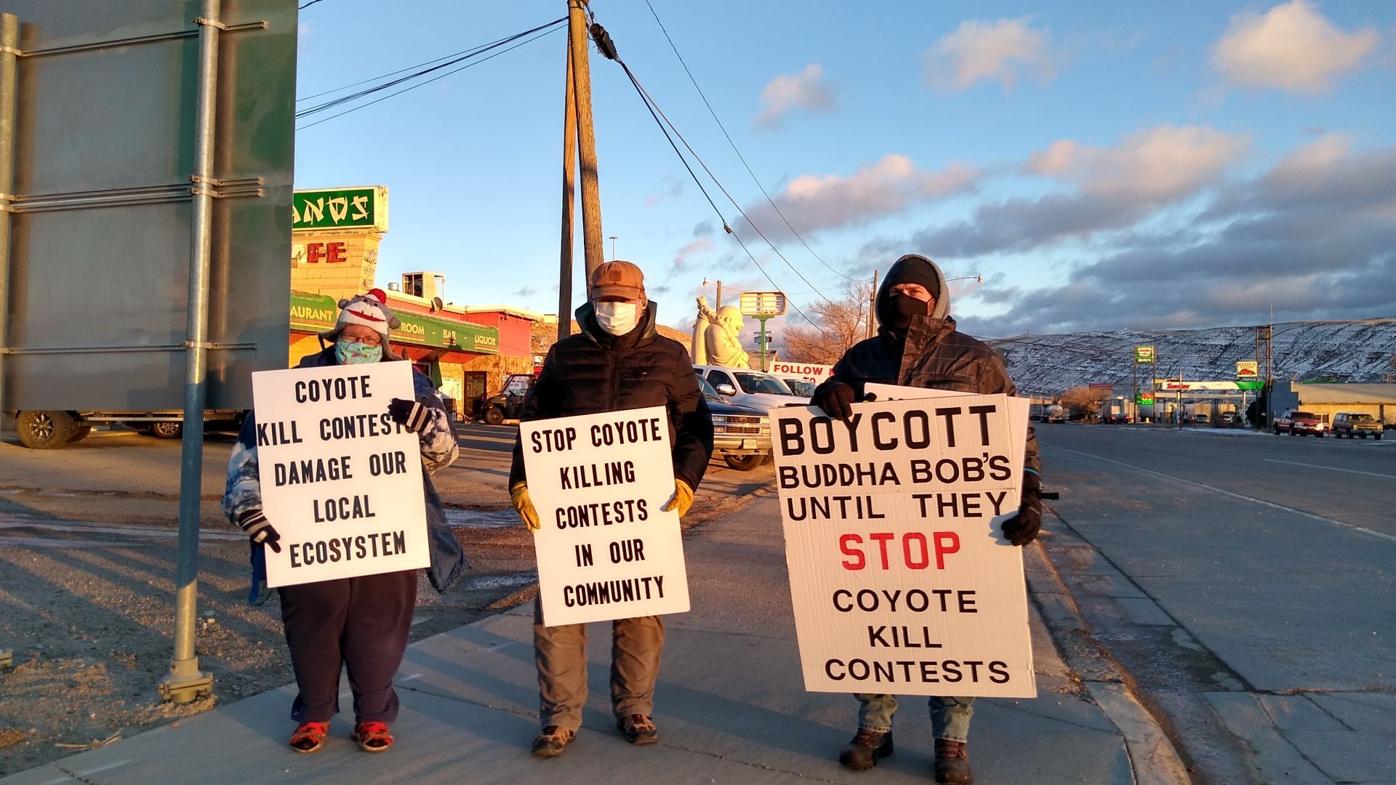 Wyoming Best of the Best organized a coyote hunting contest on Feb. 6, which drew protests. 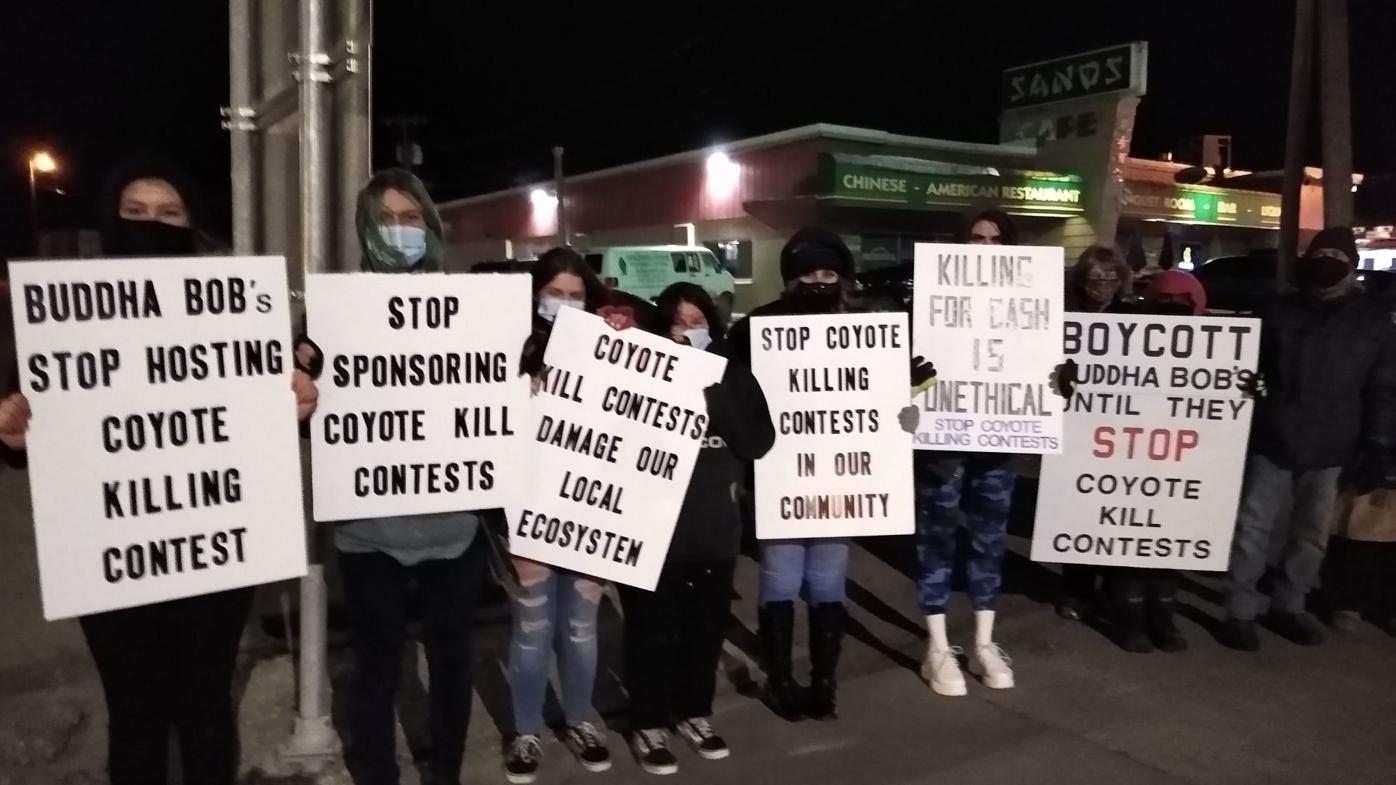 Protesters called for the cessation of a coyote killing contest sponsored by Wyoming Best of the Best.

Residents protest outside Buddha Bob’s Bar at the Sands in opposition to a coyote killing contest.

Wyoming Best of the Best organized a coyote hunting contest on Feb. 6, which drew protests.

Protesters called for the cessation of a coyote killing contest sponsored by Wyoming Best of the Best.

As a longtime resident of Rock Springs, I was disturbed to find out that a coyote killing contest is being organized in my town. So along with a few friends, I decided to protest it. We held signs outside Buddha Bob’s Bar at the Sands on Feb. 3, 4, 5 and 6.

A group called Wyoming Best of the Best has organized this contest and was scheduled for Feb. 6. In this contest participants competed for cash and prizes to see who can kill the most coyotes in one day.

There are two main reasons why we want these events to be banned.

The first one is these contests are cruel and unethical because they glorify violence and send a wrong message to our younger generation that killing is fun. It also gives our hunters and wildlife agencies a bad name. These contests clearly violate the fundamental hunting ethic of fair chase and respect of animals and their habitat. The participants usually use high-tech equipment. One of the devices they use is an electronic calling device that plays sounds of a crying coyote in distress to bring the animal closer to the hunter. Manipulating animal’s natural behavior to lure them into gun range is not hunting and is condemned by most hunters and non-hunters. Another thing is these contests can leave countless young dependents to starve to death or become easy prey to the predators.

The second reason is these coyote killing contests are unsustainable and ineffective because mainly they create instability and disruption in the social family structure of the animals that are killed and often it encourages more breeding and more migration. The organizers of these contests often claim that they are reducing predators that can increase herds like elk and deer or will make livestock safer but we do not have any documented scientific evidence for that. We should consider the perspective of our hunters and other community members who respect the important role the native carnivores like coyotes play in maintaining a healthy ecosystem. Coyotes help us in creating biodiversity, they help us in controlling rodent population and even reduce disease transmissions by cleaning up animal carcasses.

Coyote killing contests are harmful to animals, the environment and the public. They are cruel, dangerous and do not reflect fair sportsmanship and thus are an embarrassment to our community.

I also raised my concerns regarding this issue at County Commission meeting on Feb 2. I also met with Todd Graham, regional wildlife supervisor of Game and Fish Department. I politely urge them to help me cancel the coyote killing contest event and ban such future events in our city.

Killing coyotes and disposing their bodies like garbage is not “tradition.” We have to stop these kinds of contests from being organized in our peaceful community.

If you are looking for recent scientific citations, you could start with the Journal of Mammalogy, Volume 98, Issue 1, Feb. 8, 2017: “There are three reasons that predator removal is likely to have no long-term effect — or even adverse effects — on depredation of livestock: vacant territories are quickly recolonized (Knowlton et al. 1999; Treves and Naughton-Treves 2005); immigration rate of breeding pairs into the area experiencing lethal control can increase (Sacks et al. 1999); and immigrants are more likely to be subadults, which have a greater propensity for livestock depredation than older adults (Peebles et al. 2013).”

This aspect of coyote resilience and survival is also cited by many state wildlife agencies — including our own Wyoming Fish and Game Department, which has said, “When targeted at the coyote, predator control programs have actually been counterproductive because coyotes have the ability to rapidly recolonize an area following elimination of a resident population. Studies have shown that increased control of coyote populations tends to increase average litter size of surviving coyotes resulting in a relatively stable population.” Just a couple other examples from western states include Arizona Game and Fish, “Removing coyotes from one area generally results in other coyotes moving in from surrounding areas and breeding faster,” and Colorado Parks and Wildlife, “Even the best eradication efforts cannot remove all the coyotes and research has proven such eradication will cause the remaining coyotes to increase reproduction, creating larger litters. Thus, removal programs lead to increased reproduction by the remaining coyote populations and populations quickly meet or exceed pre-control numbers.”

Seven states — including California, Vermont, New Mexico, Arizona, Massachusetts, Colorado, and Washington state — have now banned them. And crucially, five of those states (California, Arizona, Massachusetts, Colorado, and Washington state) banned them through the state’s own wildlife commission, citing their potential to inflict grievous damage on the reputation of the state’s hunting community. I hope that Wyoming will soon join that list.