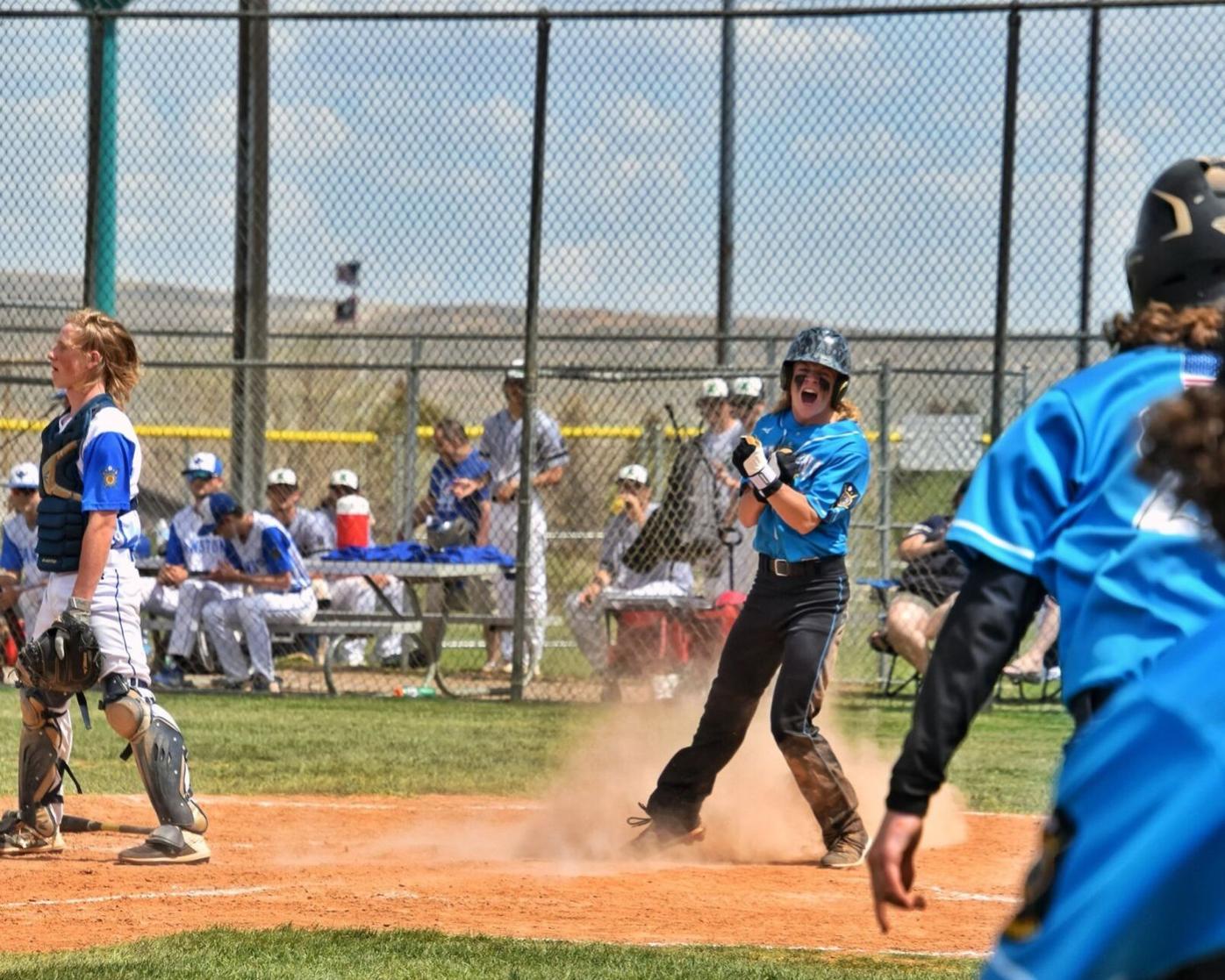 Sam Wheeler of the Post 24 Stallions celebrates as he crosses home plate for what was the game-winning run Sunday morning against Evanston. 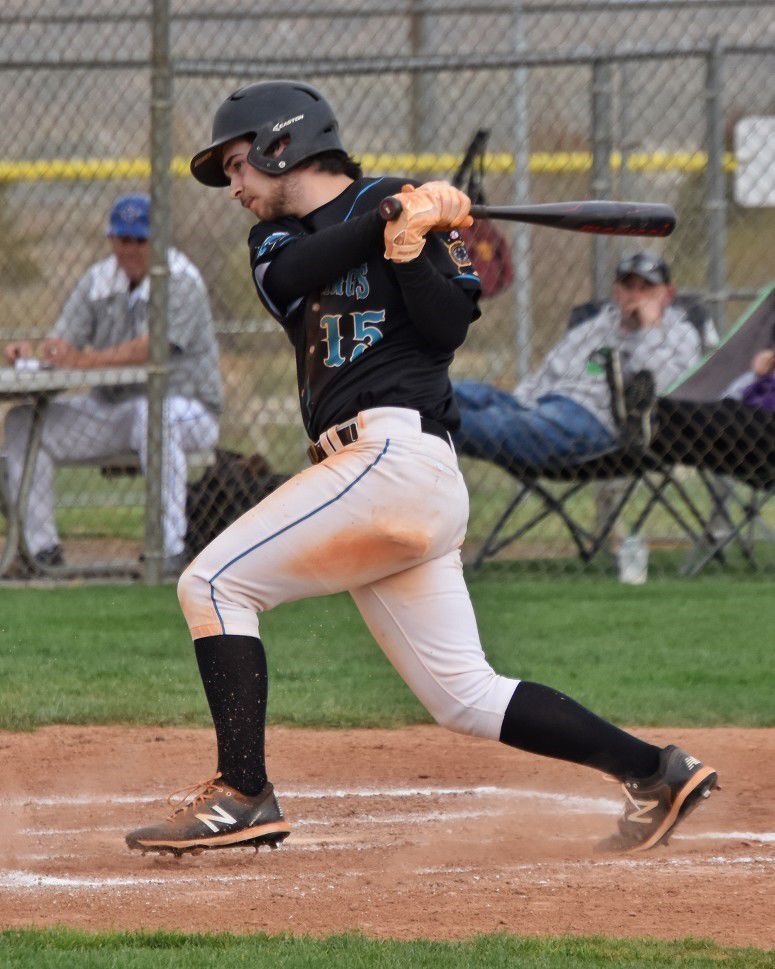 Dominik Gunyan of Rock Springs looks to make a big play at the plate. With a sacrifice fly on Sunday, Gunyan drove in the game-winning run to help lead the Stallions to a 19-18 thriller over the Evanston Outlaws.

Sam Wheeler of the Post 24 Stallions celebrates as he crosses home plate for what was the game-winning run Sunday morning against Evanston.

Dominik Gunyan of Rock Springs looks to make a big play at the plate. With a sacrifice fly on Sunday, Gunyan drove in the game-winning run to help lead the Stallions to a 19-18 thriller over the Evanston Outlaws.

The Rock Springs Stallions got off to a shaky start losing their first two games on Saturday. Despite Mason Taylor hitting his first career home run, Rock Springs fell to Green River by a score of 8-3 and followed that up with a 14-2 loss to Evanston a few hours later.

However, after a quick turnaround, the Stallions came out on Sunday and strung together back-to-back wins, ending the weekend on a high note. Rock Springs defeated Evanston in a 19-18 thriller earlier in the day and then wrapped up the tournament with a 12-7 victory against Green River.

After trailing by one in the bottom of the sixth inning, Dominik Gunyan of Rock Springs stepped to the plate and hit a sacrifice fly deep into the outfield to win the game. Gunyan’s efforts not only brought in the game-winning run, but also put to bed what was a five-game losing streak for the Stallions.

To begin the contest, Rock Springs trailed heavy after giving up eight runs in the top of the first inning. However, over the next three, the Stallions offense caught fire and scored 13 unanswered to take a five-run lead going into the top of the fourth inning. Midway through, Rock Springs regained the lead for the second time after scoring two runs in the bottom of the fourth, but Evanston wasn’t backing down. With five runs in the top of the sixth, the Outlaws led 18-15 with only three outs remaining, but Rock Springs didn’t back down. Instead, the Stallions offense hung on, and with Gunyan’s heroics they strung together four huge runs when it counted most to win the game in dramatic fashion.

Despite being outhit 16-11, Rock Springs did just enough to come out on top. Of those 11 hits, Gunyan led the way for the Stallions. In four plate appearances, had four hits and drove in five of the team’s 13 runs batted in. Hudson Garner, Hudson Pecolar, and Thomas Murphy all finished tied for second with two hits apiece. The final Stallion to record a hit Sunday morning was Sam Wheeler. Batting in the other six runs were Wheeler, Trayton Gunyan, Garner, Pecolar and Murphy.

In a two-third inning pitched, Barrick Hess allowed two runs across on three hits and walked one. Parker Ross pitched the rest of the way. In five and one-third innings, Ross allowed 16 runs on across on 13 hits. During this time, he walked two batters and recorded four strikeouts.

Not long after wrapping up a thrilling win against the Outlaws, Rock Springs carried that momentum into their next game against the Knights. In the first two innings, the Stallions jumped out to a commanding 5-0 lead and never looked back. The Knights answered back with a run in the top of the third, but it wasn’t enough to swing the momentum. Over the final three innings, Rock Springs outscored Green River seven to six before ending the game with a 12-7 victory.

To help seal the win, the Stallions outhit the Knights 10-6, but it was the four RBIs from Dominik Gunyan that stood out. Andrew Rondinelli, Garner, and Ross combined for the final three. On another note, the team’s offensive consistency helped lead the Stallions to their second straight win. Rock Springs had four players finish the contest with two hits. Wheeler, Ross, Rondinelli, and Gunyan all tied for a team-high with two, while Garner and Murphy each came away with one.

To help lead the team to victory, pitcher Dylan Johnson picked up the win for Stallions. Throughout four innings on the mound, Johnson allowed just one run across on two hits. During this time, he walked batters and recorded three strikeouts. Another pitcher to contribute to the win was Jaden Hunt. In just one inning, Hunt allowed six runs across on four hits and walked two.

Following a strong finish to this weekend’s tournament, the Stallions will look to stay hot and ride their momentum into their next set of games. Up next, Rock Springs will host Casper on Sunday, June 13, out at the Paul J. Wataha Field Complex. The first game of the doubleheader will start at 1 p.m. followed by latter game right after at 3:30 p.m.