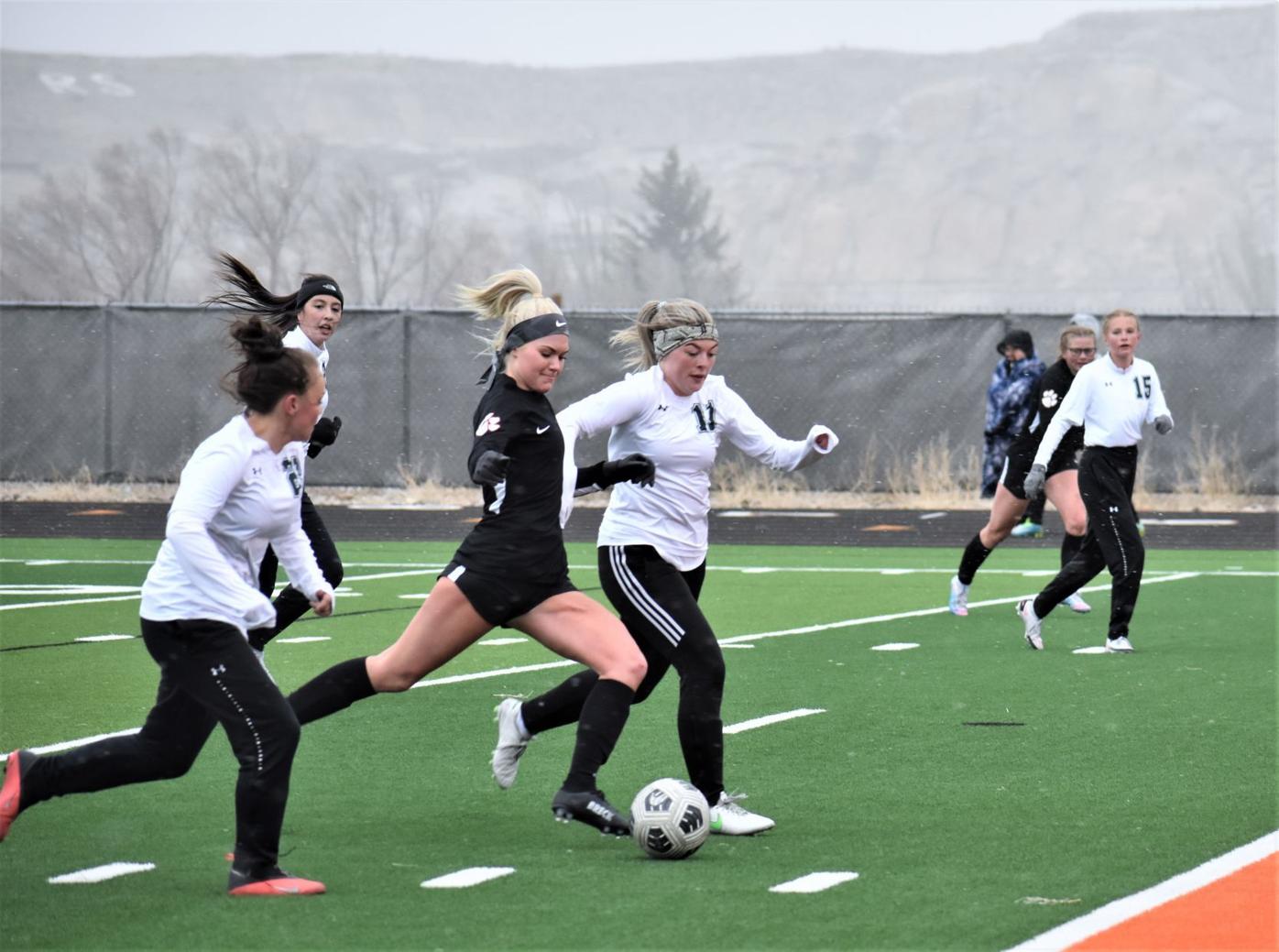 Brecken Hunsaker of Rock Springs sprints through Green River’s defense earlier this season. On Thursday, Hunsaker recorded three goals for the Tigers in 13 minutes to help lead her team to an 11-0 victory and in the process claim the Sweetwater Cup. 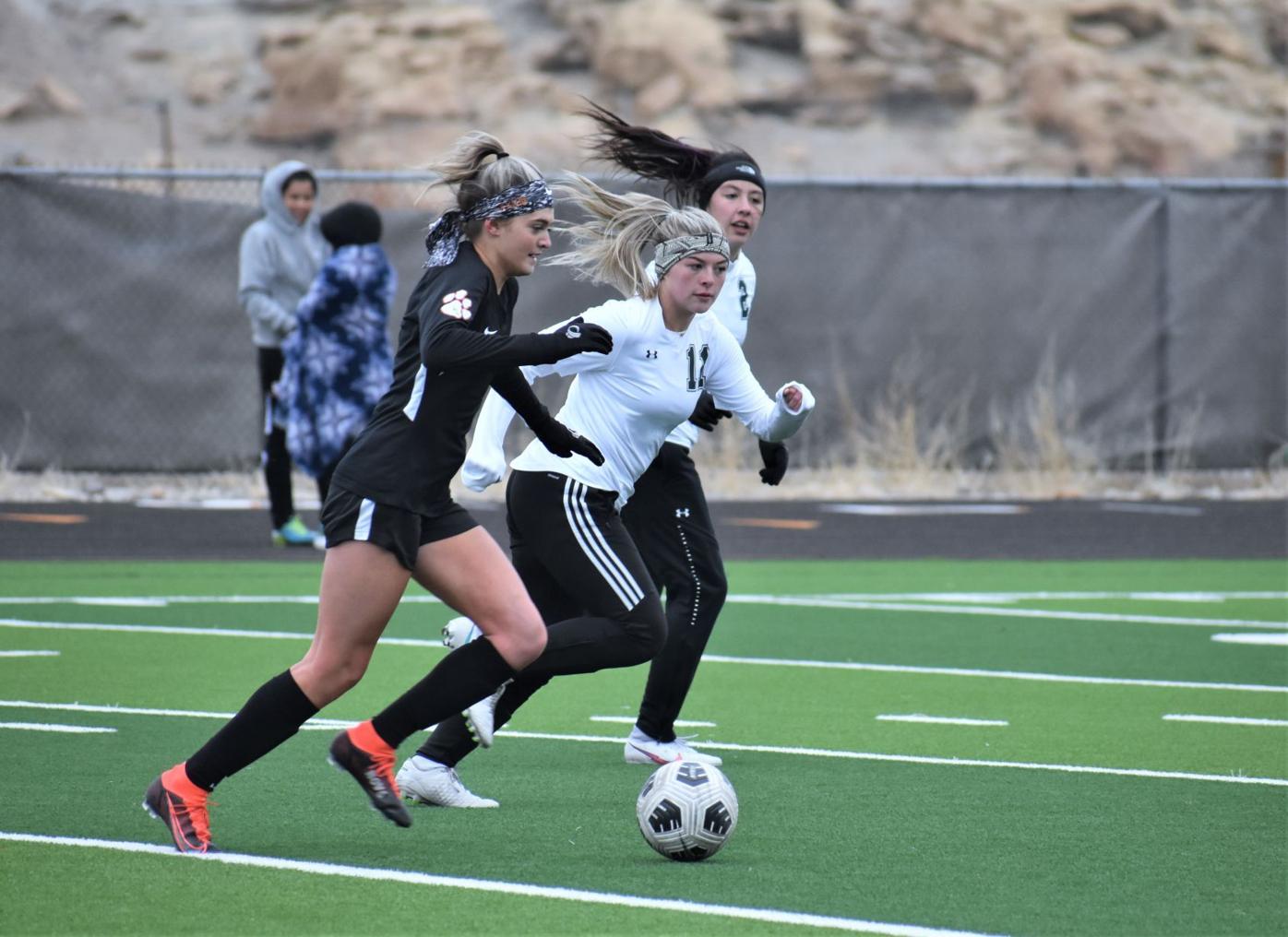 Rock Springs High Shool junior Novaleigh Moses dribbles around a Wolves defender. Moses was one of many players from Rock Springs to put up strong numbers on the stat sheet Thursday afternoon on the road. She recorded one goal and two assists.

Brecken Hunsaker of Rock Springs sprints through Green River’s defense earlier this season. On Thursday, Hunsaker recorded three goals for the Tigers in 13 minutes to help lead her team to an 11-0 victory and in the process claim the Sweetwater Cup.

Rock Springs High Shool junior Novaleigh Moses dribbles around a Wolves defender. Moses was one of many players from Rock Springs to put up strong numbers on the stat sheet Thursday afternoon on the road. She recorded one goal and two assists.

GREEN RIVER – The Rock Springs High School girls soccer team improved to 10-2 on the season on Thursday after going into Green River and defeating the Wolves 11-0. Not only did the Tigers pick up the win against their rivals, but they brought back the Sweetwater Cup.

Earlier in the year, Rock Springs defeated Green River 14-1 at home in the first leg of the event. With Thursday’s victory, the Tigers will keep the trophy in Rock Springs for a fourth consecutive year.

“It was a great team win,” Tigers head coach Stephen Pyer said. “The girls came ready to play after a great week of preparation and it showed.”

It took Rock Springs two minutes before finding their way on to the scoreboard. Karli Nelson picked up the game’s first goal after receiving a great pass from Brecken Hunsaker. Before the play developed, RSHS junior Kylee Knudsen delivered a cross into the middle of the field where Hunsaker used her head to connect with Nelson.

Four minutes later, Hunsaker stretched the Tigers’ lead to two. Senior defender Zoe Silovich was credited with an assist on the play. Starting all the way from the back line, Silovich kicked the ball deep downfield, allowing Hunsaker time to make a strong run. After chasing down the ball and burning past every defender, the junior striker kicked the ball past the Wolf goalkeeper and into the back of the net.

Hunsaker soon found the back of the net again. After receiving a pass over the top from junior Novaleigh Moses in the 10th minute, Hunsaker dribbled past a couple of defenders and kicked the ball across the goal line for her second tally of the contest.

Hunsaker completed her hat trick in the 13th minute. Tiger defender Corallee Weinreich picked up the assist. Following another great pass over the top, Hunsaker tracked down the loose ball and extended Rock Springs’ lead to a commanding 4-0.

Emily Taucher continued to push the pace for the Tigers. In the 19th minute, the junior striker stretched the lead to 5-0 after burying her free kick from 25 yards out.

Before Green River’s defense had a chance to even catch its breath, senior Lauren Profaizer put through her first goal of the year one minute later. Moses earned her second assist of the contest.

“That was a great play,” Pyer said. “Moses dropped the ball back, and after beating a defender, Lauren ripped a strong shot from about 30 yards out that eventually found the far post and went in.”

With Profaizer’s goal, Rock Springs went into halftime not only feeling confident holding onto a 6-0 lead, but with both the offense and defense finding ways to contribute, there wasn’t much Green River could do to stop the Tigers’ momentum.

Eight minutes into the start of the second half, RSHS senior Olivia Politi found Silovich for Rock Springs’ seventh goal. Already inside the box, Politi was starting to get pressured and found Silovich, who then deflected the ball into the netting.

Still in the 48th minute, Rock Springs went right back on the attack and scored again. Moses scored for the first time that afternoon. The junior forward received a great drop back pass from Amrey Willoughby from inside the 18-yard box and blistered the ball past the goalkeeper.

Over the next 32 minutes, Rock Springs went on to score three more goals. Freshman Kassidi Webb scored the team’s ninth goal in the 60th minute. Following a strong run down the left sidelines from Weinreich, the junior defender cut inside and found Webb wide open inside the box for her first and only tally on the day.

In the 67th minute, freshman forward Ella Brewster found the back of the net and extended the lead to 10-0. Weinreich picked up her third assist of the day on the play.

Soon after, RSHS junior Alyx Bolton kicked through the team’s final goal in the 78th minute with an assist from sophomore Shelby Shoenfield.

In its dominating 80-minute performance, Rock Springs outshot Green River 27-1. Senior Alex Moeller played goalkeeper in the first half, and Profaizer and Silovich split time in goal in the second. Profaizer recorded the only save for Rock Springs.

When asked about his team’s overall performance, Pyer said he was pleased with what he saw, especially after having a busy week.

“Coming into Thursday with already having played on Tuesday and a having a scrimmage the day before, I was happy to see that the girls still had their legs,” he said. “It’s always great when you can put a high number of goals on the board and be able to play some of the younger girls as well.”

The Tigers sit at the top of the 4A West Conference and will next travel to Casper to close out the regular season. Rock Springs will play Natrona County at 3 p.m. Friday, May 8 ,followed by Kelly Walsh at 10 a.m. Saturday.

In addition to the girls’ success, the Rock Springs boys team picked up a win Thursday afternoon on the road after coming back to defeat the Wolves 2-1. With the win at home earlier in the year, Rock Springs claimed the Sweetwater Cup.