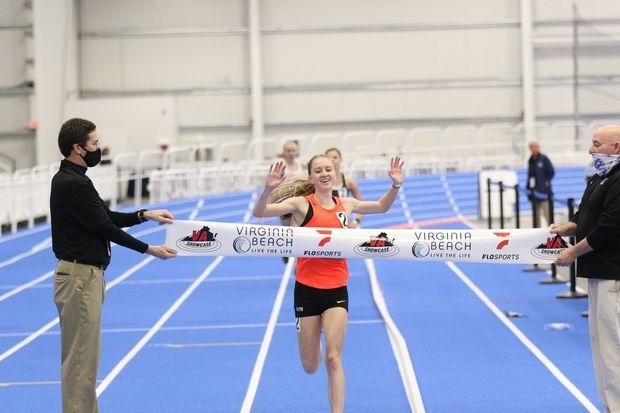 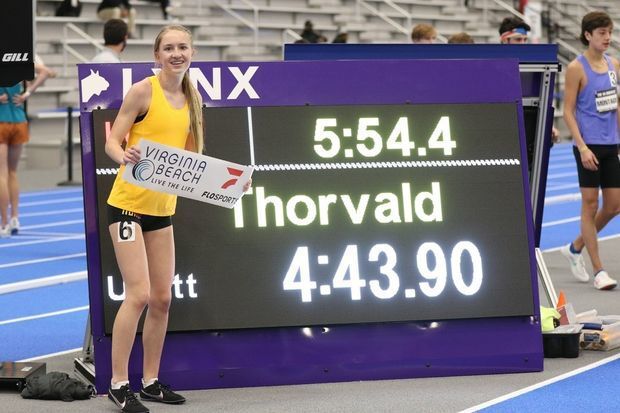 Sydney Thorvaldson poses in front of the scoreboard that marks her new meet record at the prestigious Virginia Showcase Indoor Track Meet. The meet was by invite only in order to stay in line with COVID-19 restrictions and featured a field of the fastest high school runners in the country.

Sydney Thorvaldson poses in front of the scoreboard that marks her new meet record at the prestigious Virginia Showcase Indoor Track Meet. The meet was by invite only in order to stay in line with COVID-19 restrictions and featured a field of the fastest high school runners in the country.

Rawlins High School senior Sydney Thorvaldson started her 2021 indoor track season exactly where she left off with her cross country season: on top.

The Outlaw senior flew to two impressive wins last weekend at the Virginia Showcase in Virginia Beach, VA. Thorvaldson dominated in both the mile and two mile races and set the meet record for both events.

The Virginia Showcase, for the past several years, has been considered the largest and most prestigious indoor track event for high schoolers in the country. Because of the ever-looming COVID-19 pandemic, the event was limited in number this year, but that didn’t make it any less competitive or her wins any less impressive. In fact, only the top athletes in the country were permitted an entry, which was by invite only.

Thorvaldson received her invitation to the event in the fall of 2020, during the cross country season. Undoubtedly, meet officials saw the times she was putting up on the cross country course and knew she’d be a top candidate to fill the limited spots available. Without hesitation, Thorvaldson signed on for the event. She looked at it as an opportunity to compete, which has been relatively hard to come by in the past year, so she didn’t consider saying no.

Where Thorvaldson is usually the hand’s down favorite on the cross country course because of her ability to absolutely dominate in long distance runs, there were a couple runners in both races who were favored ahead of her. True to form, though, she didn’t shy away from the challenge and proved why she earned every bit of her full-ride scholarship to the University of Arkansas.

In the one-mile race, which Thorvaldson ran the day before the two-mile, she notched an impressive time of 4.39.9. Her time was an astounding 5.16 seconds faster than the second place finisher, Brooke Rauber of Syracuse, NY. Thorvaldson had Rauber on her radar, as the NY runner is exceptionally fast at the one-mile. The Outlaw is usually the first to admit that she prefers to run longer distances and feels stronger in those races. However, in Virginia, she was in her groove for the shorter race despite some nerves heading to the starting line.

“I was definitely nervous going in,” she said. “It’s not really my main event that I’m typically most focused on but I don’t typically get the chance to race at sea level so I wanted to do it. I knew the field was stacked so I just wanted to try to get a PR and it ended up just really fast. There was definitely a lot of adrenaline going in. I was excited and I took the lead from the beginning. I felt really good and didn’t see any need to hold back.”

Following her incredible performance during the mile, Thorvaldson set her sights on the two-mile the next day. Again, she was familiar with who would likely be her main competition. In this race, it would be Brynn Brown from Texas. Thorvaldson had actually beaten Brown at her last high school cross country meet of 2020, the High School Cross Country National Invite in Lubbock, TX in Dec. That said, Brown is particularly adept in the two-mile, and Thorvaldson had no intention of underestimating her.

“I was probably a little tired going into the two-mile from the mile the day before,” she said. “I did a shake out the morning of the race. I admit I was a little nervous. I knew Brynn Brown, that was her race. I figured it would be close, or hoped it would be, at least.”

Thorvaldson’s strategy in the two-mile was to stay tucked just behind Brown for the first mile and gauge how the pace was going to be.

“I did a few surges to keep things interesting,” she noted. “But I felt really good after the first mile and felt like I could make my move. You get to the point of lapping people and you just need to make the move.”

It’s impressive that Brown and Thorvaldson eventually started lapping the rest of the field. That’s a testament to just how fast they both moved through the race. Thorvaldson was able to keep the lead, finishing in 9.47.95 to Brown’s 9.51. The first place time was the second fastest indoor two mile time recorded in high school history. The only time to ever be recorded faster than Thorvaldson’s came from professional runner Mary Cain, who has since become an Olympian.

Her two, first place finishes mark the first time she’s raced on a track since the indoor season last year. Thorvaldson’s spring track season was canceled due to COVID-19. Even though she typically prefers racing cross country, she admitted to being happy to finally race on a track again.

“It was a little weird to be back on a track. I really do love cross country, but I do love track as well, especially since we didn’t get to run track in the spring. It’s nice to switch it up and run a different race. It was kind of nice to run shorter distances for a change.”

Following the meet in Virginia Beach, Thorvladson will get back to training and prepare for the handful of Wyoming events she will race in during the WHSAA indoor track season. She’s unsure, at this time, if there will be any more opportunities to compete nationally at indoor meets and noted it’s hard to plan ahead for those without knowing if they will be canceled due to the pandemic.

In the meantime, she’s enjoyed being able to run outside for most of her training this winter as the weather has been more cooperative this season than the previous one. At the level Thorvaldson competes, the high school indoor season will be more about practicing strategy and getting workouts in at competitions. She’s, understandably, just thrilled to be able to compete in what will be her final months as a high school runner before she heads to the University of Arkansas to take on the SEC.