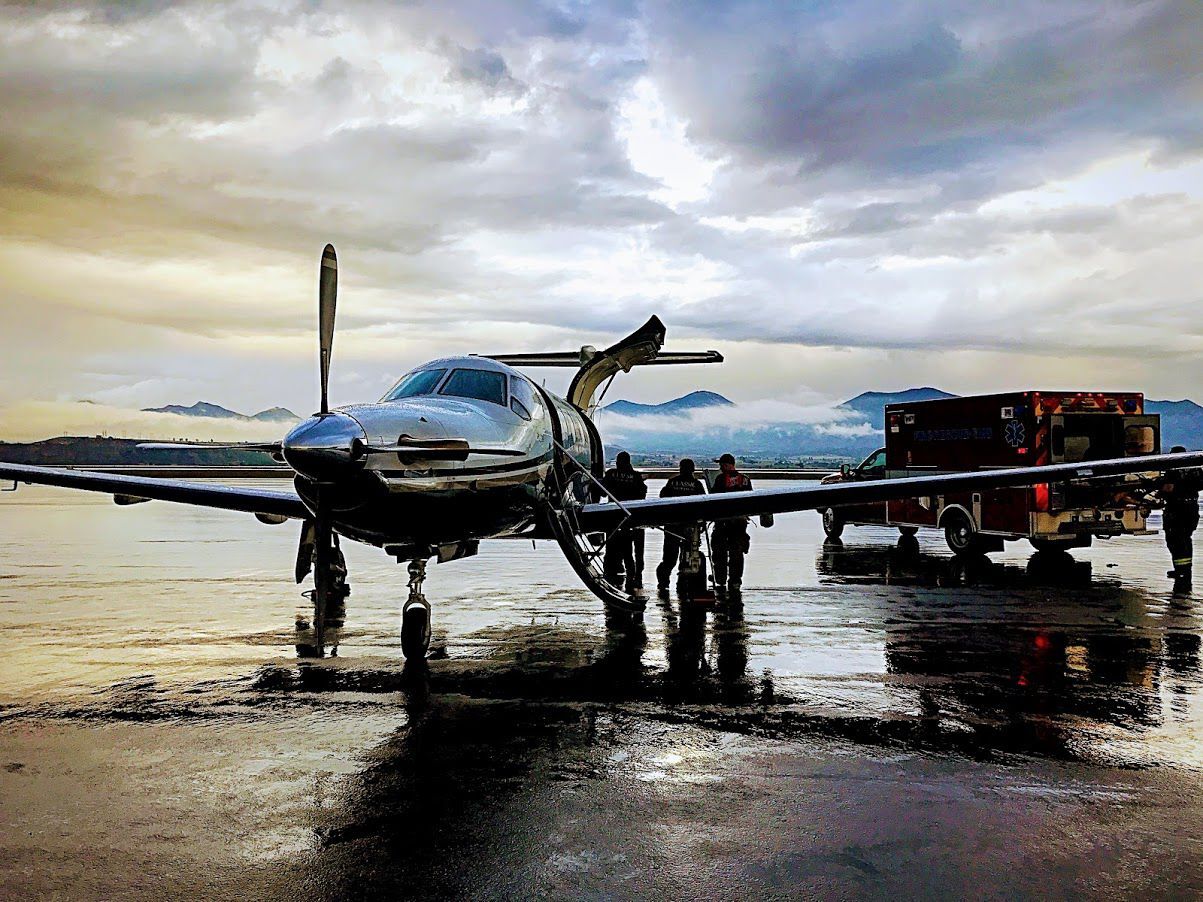 Crews transfer a patient from the ground to a fixed-wing aircraft for a flight to a medical center. Courtesy 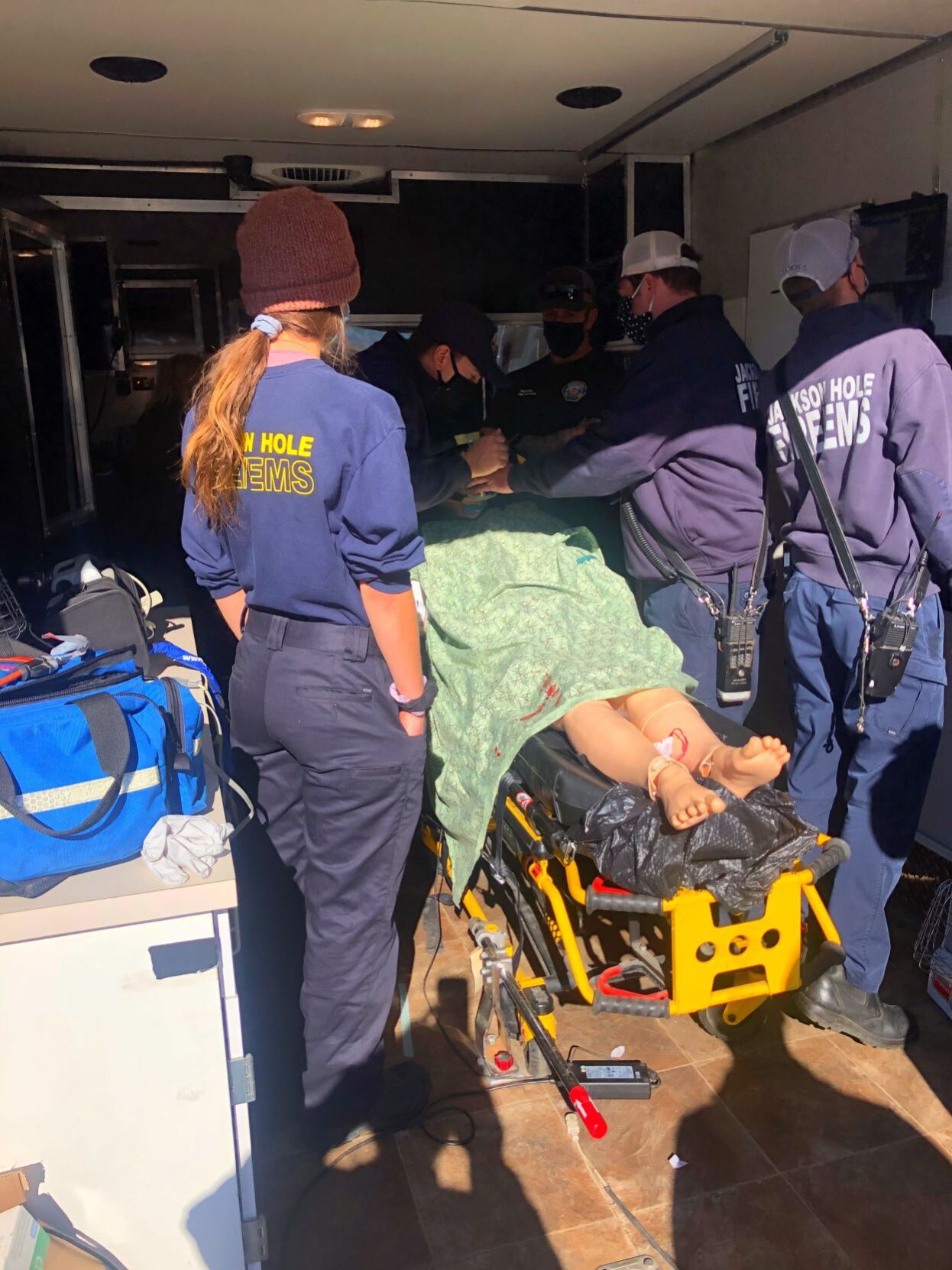 Medical personnel help a patient prior to being transferred from an ambulance to a fixed-wing aircraft to travel to a specialized medical facility. Courtesy 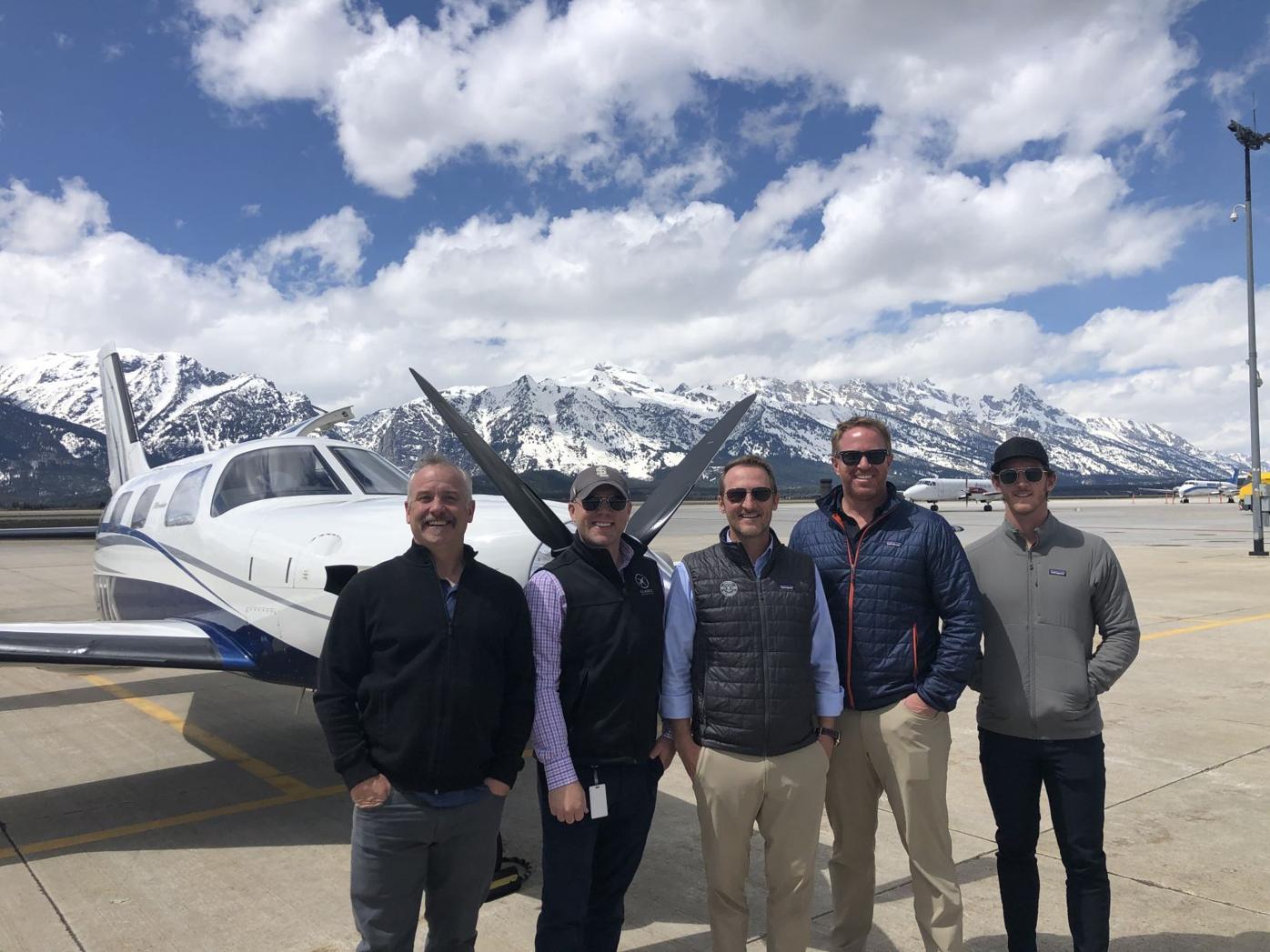 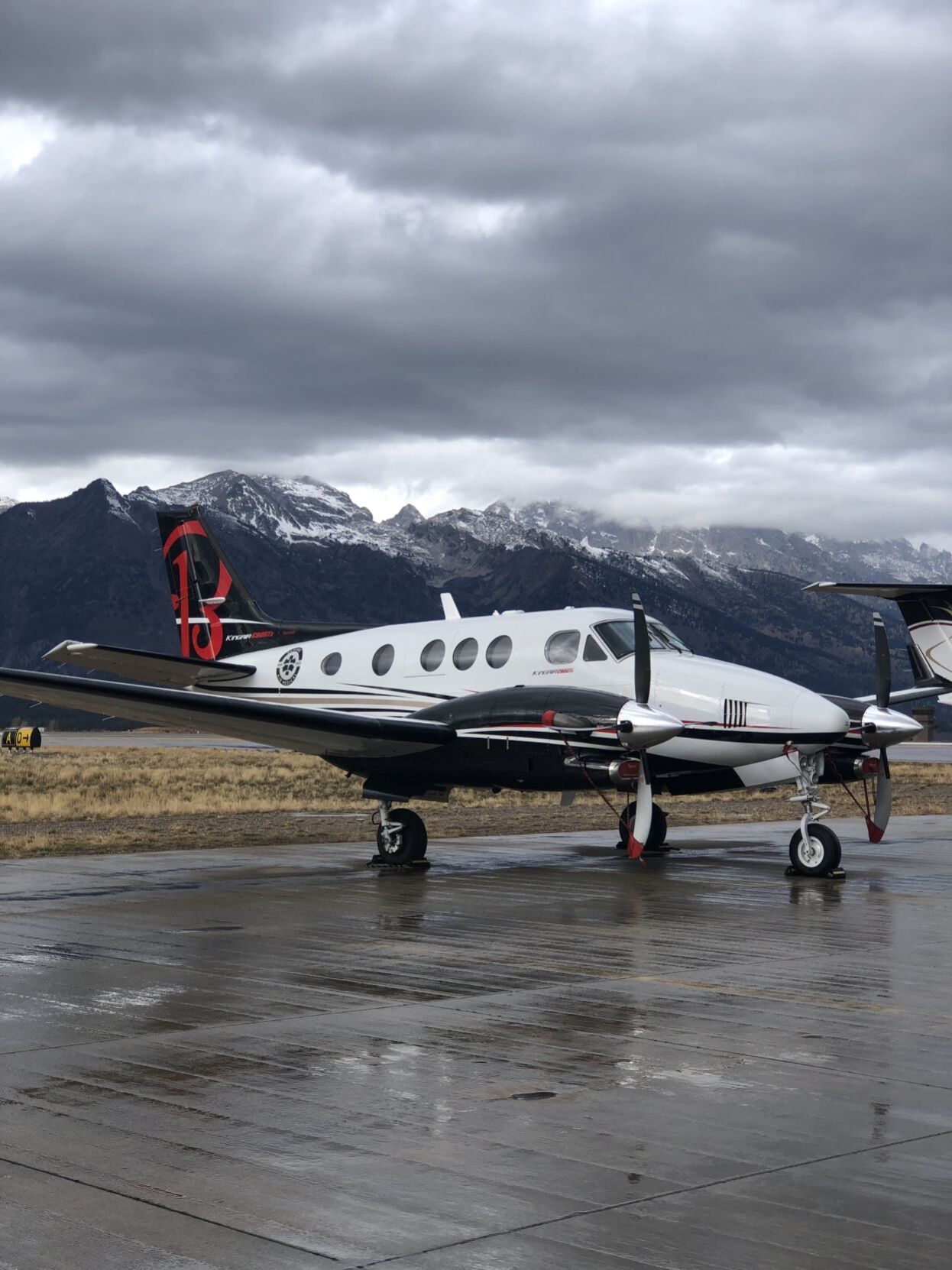 A fixed-wing medical transport plane is seen at the Jackson Hole airport. Courtesy 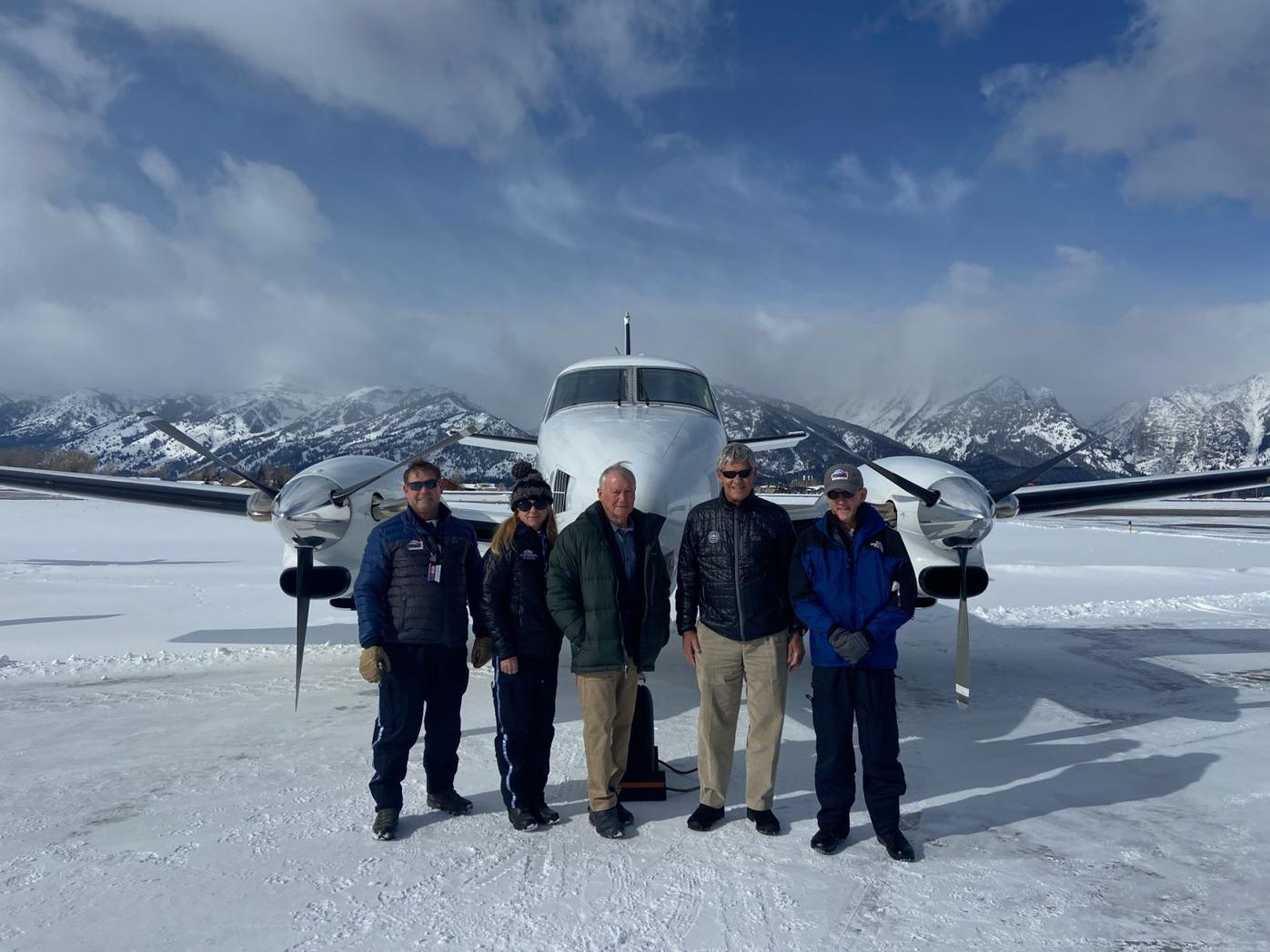 Crews transfer a patient from the ground to a fixed-wing aircraft for a flight to a medical center. Courtesy

Medical personnel help a patient prior to being transferred from an ambulance to a fixed-wing aircraft to travel to a specialized medical facility. Courtesy

A fixed-wing medical transport plane is seen at the Jackson Hole airport. Courtesy

In previously uncontested skies, two fixed-wing medical evacuation operations have opened in Jackson during the past year, where previously the closest option was a helicopter out of nearby Driggs, Idaho.

Both operations say Jackson has had a long-time need for a fixed-wing airplane flight operation. But the high costs of doing business in the richest county by per capita income in America has kept operators working around the fringe communities until recently – including one of the new operators coming into Jackson.

In May 2020, Classic Air Medical opened as the first fixed-wing operation in Jackson in many years. Now, scant months later, Jackson is already acting as home base for a second fixed-wing operator – Mountain Air Medical – battling for the limited medical evacuations the small community can offer.

According to Gary Roubin, a co-founder of Mountain Air Medical, St. John’s Medical Center transfers between 250 and 350 patients per year, a perhaps surprising number for a community hospital in a town with 10,000 residents. In 2018, the number was 261.

Of course, not all of those patients are residents. As any local will attest, millions of tourists flood Jackson during ski season and the prime summer months to access Yellowstone and Grand Teton National Park.

Since opening last May in Jackson, Classic Air Medical has been performing about six evacuations every month, said Chad Bowdre, director of customer relations. He said it probably could be more, but it takes time to build relationships with the doctors, nurses, medics and techs who habitually call on the operations that have served the community from outside of it for years.

“When in the habit for years of calling someone else, and somebody comes in and says, ‘We’re right here,’ they do need to get to know us a little bit,” Bowdre said.

The timing, Bowdre said, is “not ideal,” but added that Classic Air Medical has no ill will toward its fledgling fixed-wing rival.

In fact, it was her own crew at Mountain Air Medicaln that Schmid called on in 2014 when her husband didn’t show up after a horseback ride and she feared the worst. At the time, her team was based in Riverton before Mountain Air Medical opened shop in Jackson.

“We waited 90 minutes for the chopper to come from Riverton,” she said. But it was too late. Her husband, Bob Knori, succumbed to injuries from being thrown from his horse before he could get to lifesaving care. “I didn’t realize I’d have my own tragedy. I never thought I’d sit in those shoes.”

Now, she just wants to keep this from happening to other people with her new venture.

“Whether head injury, heart attack or stroke, we need to get our loved ones and friends to definitive tertiary care as fast and as safely as possible,” Schmid said.

On a blustery winter day, co-founder Gary Roubin of Mountain Air Medical announced his company’s arrival to the local Rotary Club. Roubin is an internationally renowned interventional cardiologist who helped develop the first FDA-approved coronary stent and also pioneered carotid stenting and embolic protection devices, according to the University of Queensland. In December, he also joined the board of St. John’s Health Foundation.

The day he announced his company at Rotary, no helicopter could fly into Jackson because of weather. However, fixed-wing flights were still possible because they can handle the weather better, making airplanes a more reliable choice for emergency flights out of the mountain valley sitting at nearly 7,000 feet ringed with mountains jutting as high as 13,770 feet.

Roubin said his team examined the pros and cons of fixed-wing service versus “rotors,” an industry term for medevac helicopters, and ended up going with fixed-wing in the end, just like Classic Air Medical.

“They’re not challenged by most weather, they’re state of the art, stable, pressurized, there’s more space for the family, they’re long-range and fast,” he said to the Rotary Club, noting that even ground ambulances can sometimes be unable or unwilling to travel when roads are long and icy. Still, both operators harbor long-term plans to add rotors to their Jackson footprint.

And while the chopper out of Driggs can only take patients to Eastern Idaho Regional Medical Center in Idaho Falls, fixed-wing air ambulances can take patients to places with more specialized care.

“I want to go with my heart attack or head injury not to a regional center,” Harrower of Mountain Air Medical said. “I want to go somewhere where they take care of lots of patients with severe symptoms. We can get you to Salt Lake City very quickly and not painfully.”

Both Classic Air Medical and Mountain Air Medical are flying the same type of plane – a Beechcraft King Air – a commonly used model for air ambulances.

Bowdre of Classic Air Medical said cardiac patients and stroke victims tend to top the list of patients who need time-sensitive transport outside of Jackson, along with trauma victims and the occasional pediatric or obstetric transport.

“St. John’s can handle an awful lot, but sometimes you max out a system, and it’s time to get to a more specialized care center,” Bowdre said.

One advantage Classic Air offers over the small, but experienced team at the nascent Mountain Air is a more diverse team that can serve specialized needs regionally. For instance, Classic Air has a team specialized in neonatal care based out of Pocatello, a quick and easy jump into Jackson by air.

“If there’s an itty-bitty baby, that group is coming to Jackson out of the Pocatello base,” Bowdre said.

Some argue that the price for the type of services provided by both new air ambulance providers is too high. A 2019 study published in “Health Affairs Journal” showed that air ambulances services charged 4.1 to 9.5 times more than Medicare paid for the same services in 2016. While many escape paying full price, some uninsured or out-of-network patients end up with bills that may be as lofty as their flight altitude.

“We found that less than one quarter of air ambulance transports of commercially insured patients were in‐network,” wrote the authors of another, similar study from both the Georgia State and Wake Forest law schools, as well as the Brookings Institution and the University of Southern California. “Two in five transports resulted in a potential balance bill, averaging $19,851.”

The authors of such studies often cite the evidence as reason to more strongly regulate the billing practices of air ambulance operators.

“Otherwise, patients, especially those in emergencies who have limited options and little bargaining power, will remain at risk of exposure to excessive charges,” said the author of one such study to Futurity.

Both Classic Air Medical and Mountain Air Medical are quick to denounce such thinking with a figurative, if not literal, eye roll. Bowdre of Classic Air said most patients’ statements for their flights ends up being about $279.

“Patients are paying very little out of pocket because we’re good at maximizing payments from insurance on that,” Bowdre said.

And when it comes to out-of-network or uninsured patients, he said “they’re probably paying $0 anyway.” For example, auto insurance can kick in for car crash victims without health insurance. For others, there’s a simple hardship waiver, Bowdre explained.

“No, we don’t foreclose on people’s homes or take grandma’s farm or anything like that,” Bowdre said. “It’s not OK to save someone’s life to ruin it financially.”

Other times, they’ll negotiate a simple flat fee of, say, $500 and write the rest off after a meeting with senior leadership.

Mountain Air similarly said they bill whatever Medicare, Medicaid or other insurers allow – around $12,000 to $18,000 per flight – not passing along overages to customers.

“We are not answerable to profit-motivated private equity business interests,” Harrower said. “Our business is structured to provide community service without having to make outrageous profits. Leanness allows us to help our community with needs when they need service.”

Harrower acts as CEO and pilot, but also vacuums the floor, he said. Schmid is director of flight operations, but also acts as a flight nurse.

“We can’t hold our positions if not out being operational, as well,” Harrower said. “The barriers of entry are steep and expensive to figure out how to work here. We’ve done that. We can serve our community, family, friends, neighbors and outlying areas.”

Schmid also pointed out that Mountain Air may even be willing to barter for services in a grassroots exchange in certain circumstances.

Whatever the case, after a long lead-in, Mountain Air Medical should be operational starting this month alongside Classic Air Medical, both filling what was once a vacuum of fixed-wing flight service in a community that badly needed it, according to multiple sources.

Disclaimer: Mark Wilcox is part of the digital marketing team for Mountain Air Medical and penned their first press release, but worked hard to ensure impartiality in this article.