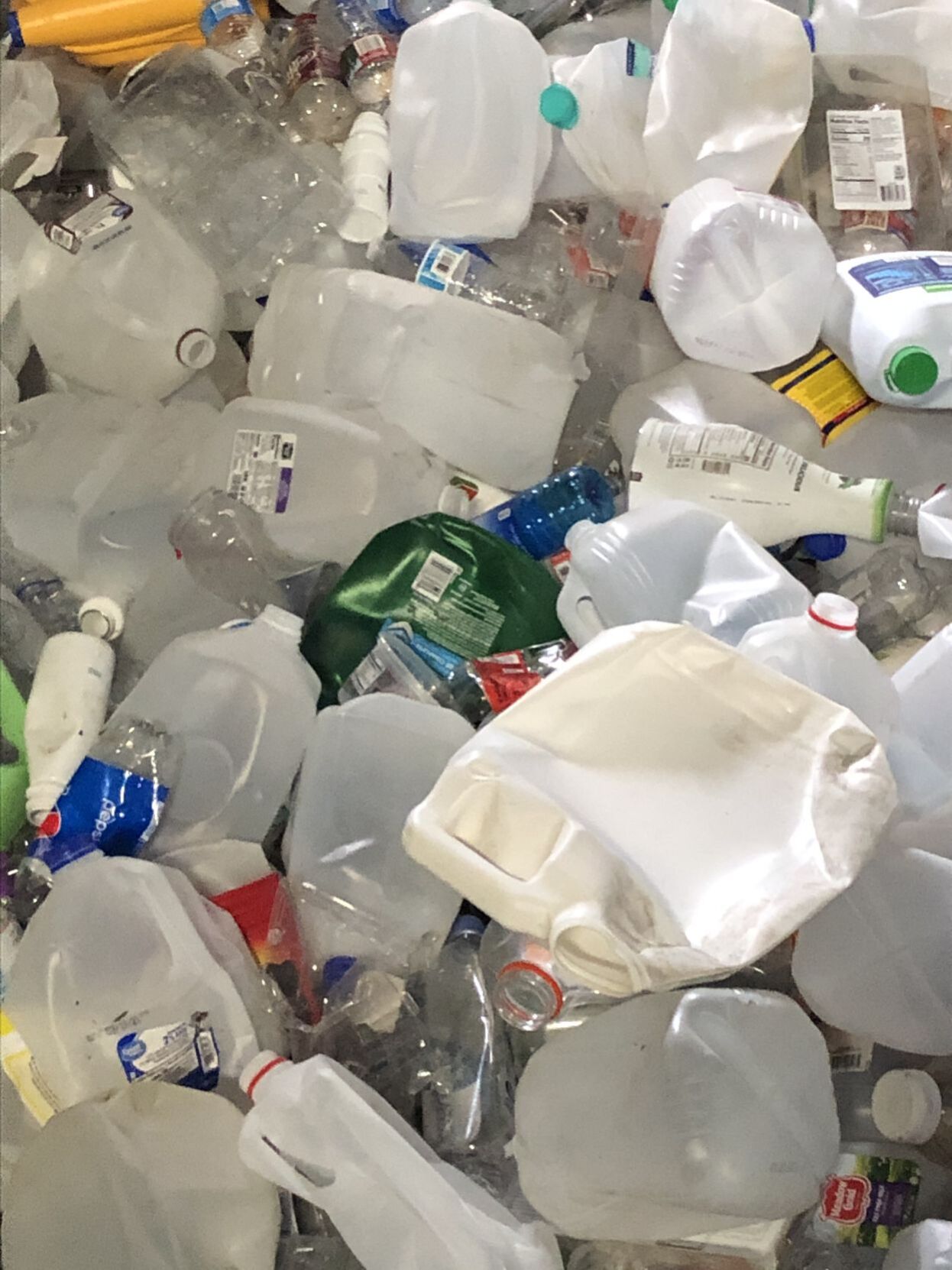 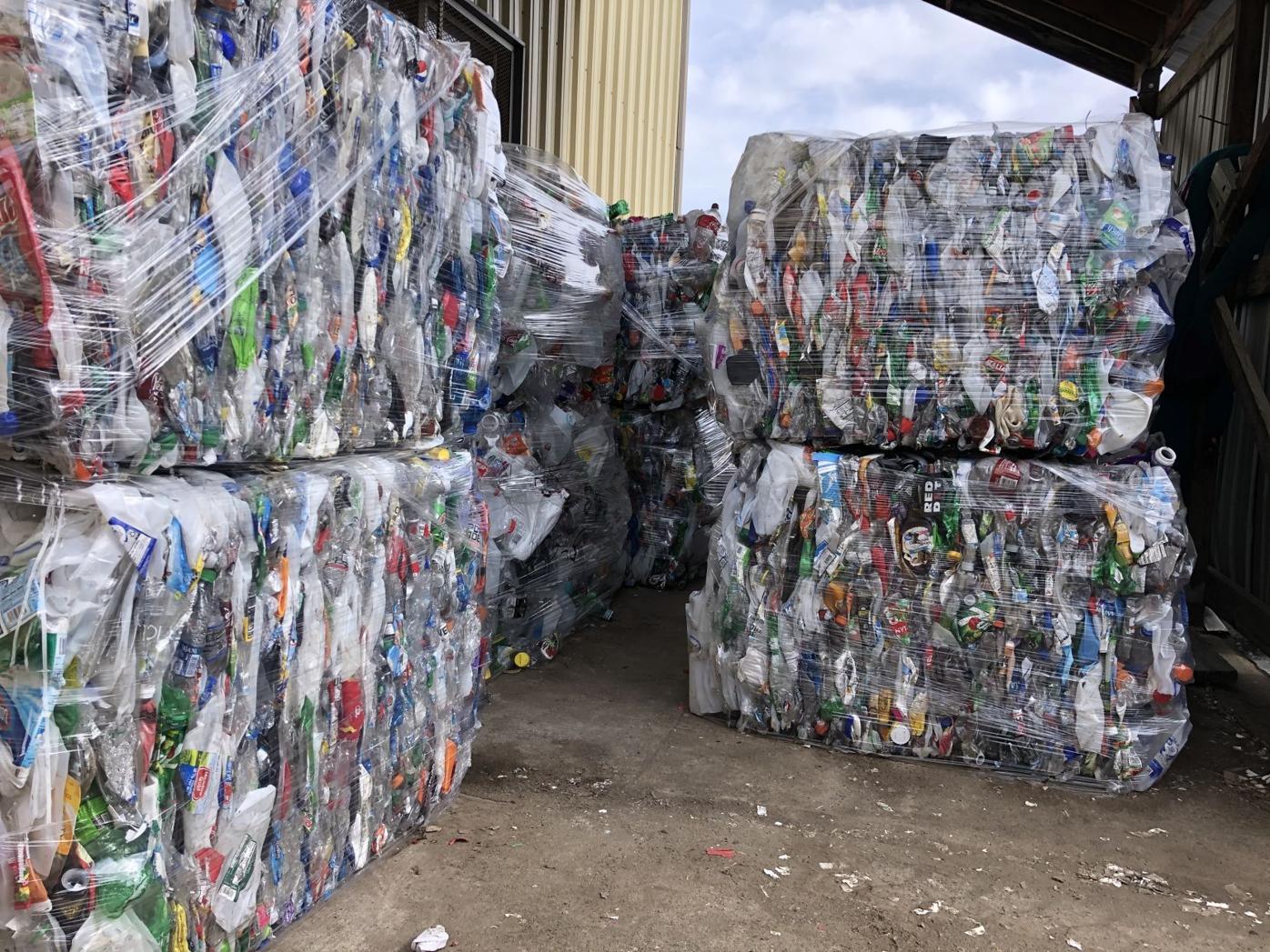 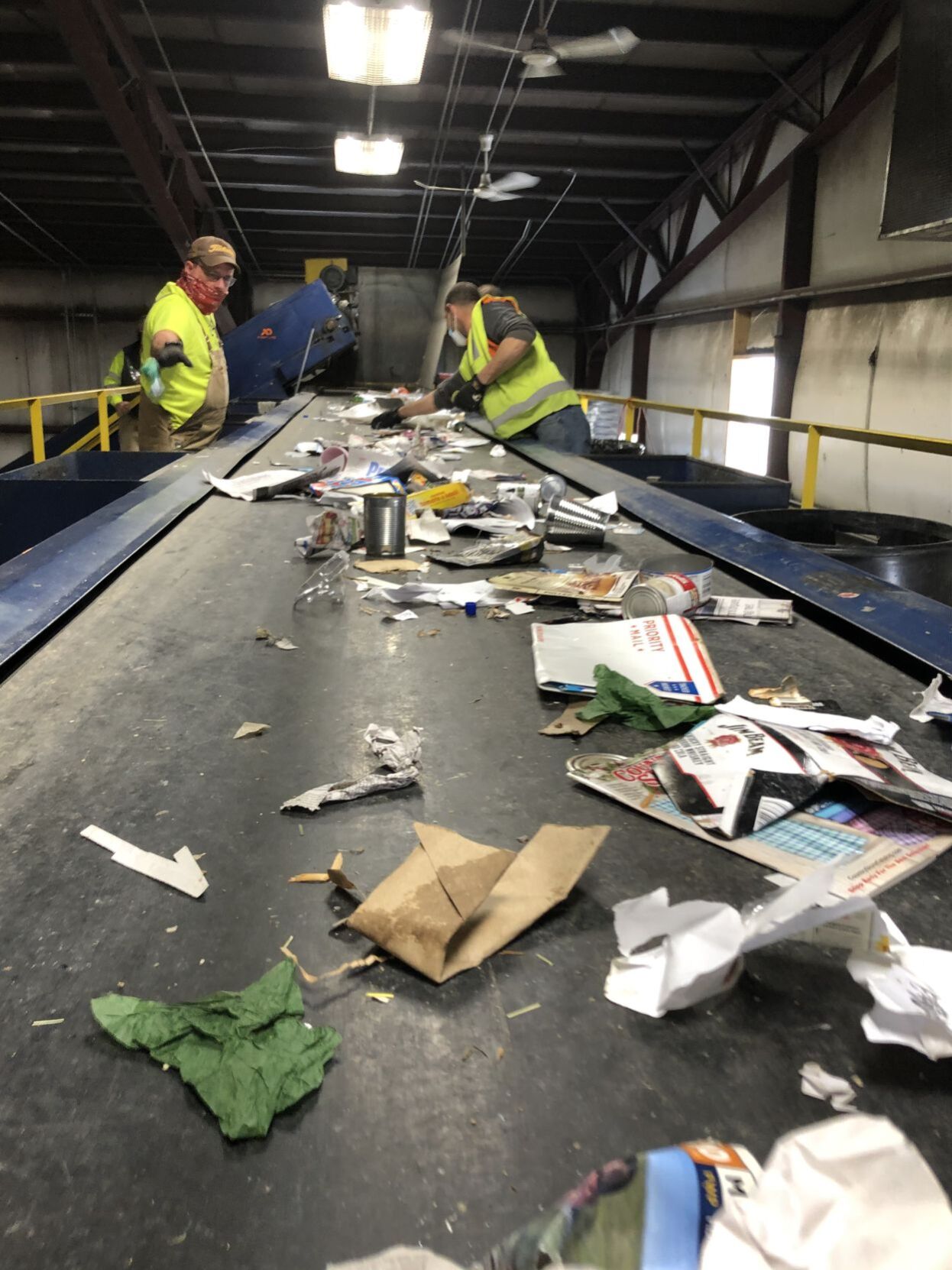 City of Sheridan workers sort recyclable materials as they go by on a conveyer belt Feb. 26, 2021. From this elevated catwalk, items are dropped below into their respective bins for plastics, paper and metals. 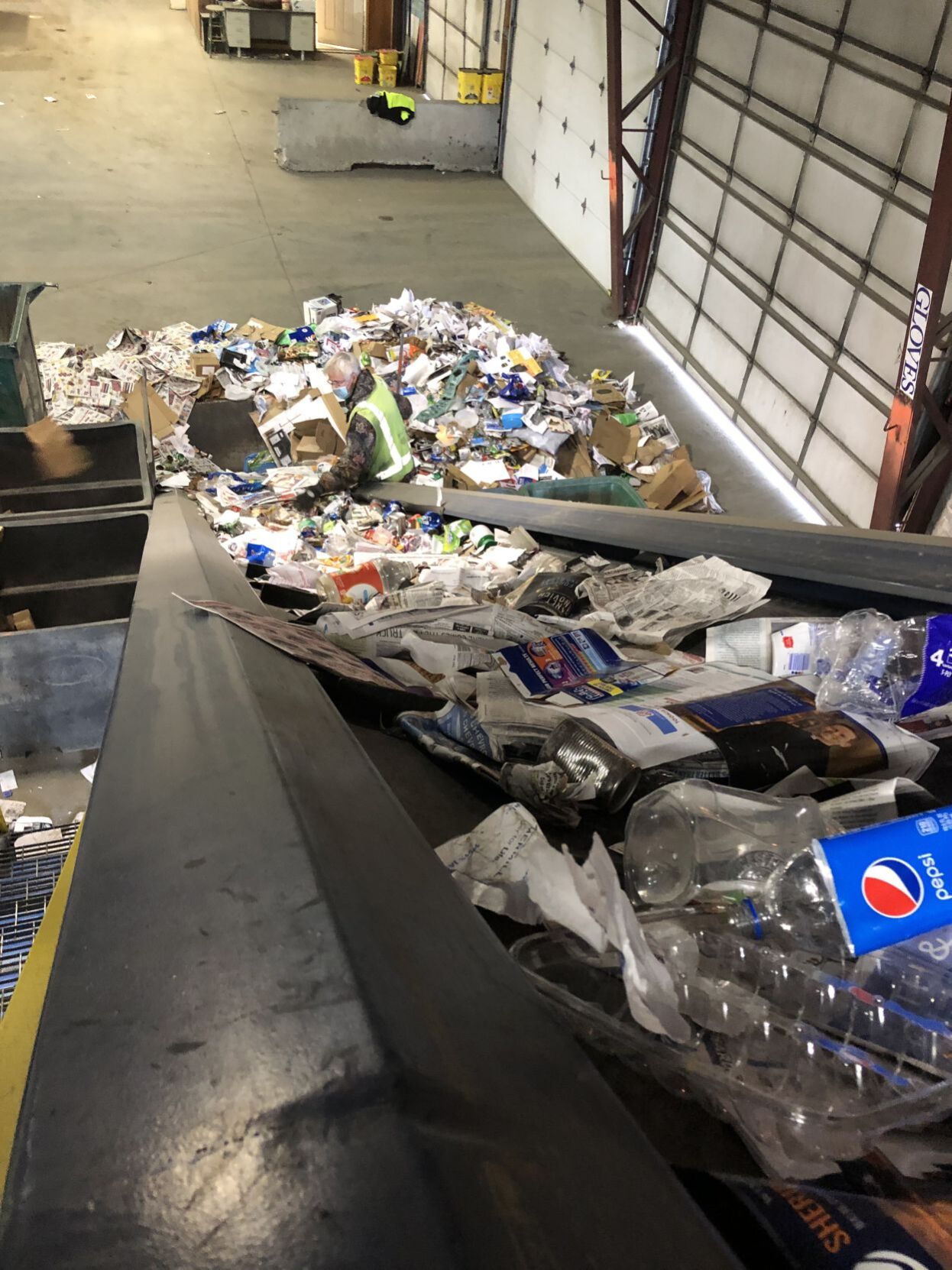 Recyclable materials travel upward to another sorting belt at the City of Sheridan Recycling Center. Of all recyclable materials, post-consumer plastics are the most difficult to recycle, but also take the longest to break down naturally.

City of Sheridan workers sort recyclable materials as they go by on a conveyer belt Feb. 26, 2021. From this elevated catwalk, items are dropped below into their respective bins for plastics, paper and metals.

Recyclable materials travel upward to another sorting belt at the City of Sheridan Recycling Center. Of all recyclable materials, post-consumer plastics are the most difficult to recycle, but also take the longest to break down naturally.

Wyoming is missing out on a big opportunity to diversify its economy and be a part of the solution to a global problem, according to those involved in the post-consumer plastics business.

As confidence in long-term reliance on the fossil fuel industry becomes less promising for the long-term, new tools and market conditions are ripening the feasibility of plastics recycling.

Many municipalities in the state have recycling programs largely touted as money savers that will lengthen the life of the local landfills, which are expensive to maintain, let alone expand. In Sheridan, for example, the existing landfill is roughly 13 acres and is estimated to have less than five years of life left. When constructed, that cell cost $5 million to build, and city officials estimate it will take another $3 million to close and provide the required monitoring for 30 years. Those costs are passed on to county taxpayers.

Sheridan Recycling and Solid Waste Coordinator Seliena Parker said at the start of the city’s recycling program in 2007, it made economic sense. Those efforts, which began with commercial pickup service and drop sites throughout the community, evolved into a full-scale residential pickup program where unsorted recyclables are picked up on a biweekly basis. The city was saving money by reducing the amount of landfill space used and making money selling post-consumer materials.

“At the inception of our residential curbside program, both attributed to its feasibility,” she said. “Less waste means fewer items in the landfill, prolonging its life. We must also consider that recycling helps to offset the price associated with disposing of these items, had they been buried. In other words, it is less expensive to recycle than to bury the materials in the landfill.”

In the beginning, Sheridan’s recyclable plastics were shipped overseas. Parker said the city worked with brokers who sent the materials primarily to China and India.

Then, in 2017, a flush of information came into the national public eye that post-consumer plastics shipped abroad were not being processed and reworked into new products, but rather, were often dumped in nature or burned in conditions detrimental to workers and the environment. It turns out that arrangement was little more than a glorified garbage trade at the national level with global repercussions, given the fact that plastics make ozone-damaging fumes when burned and can take thousands of years to break down in the natural environment. A few years later, many countries stopped buying and importing the world’s trash.

For a while, there were no options for stateside municipalities to recycle their plastics, and some bales initially intended for recycling were interred in the landfill.

Today, there are a few options to responsibly offload some plastic materials, but none of them are in Wyoming.

“With overseas markets no longer accepting plastic, our current market is limited to Nos. 1, 2, some 5 and Styrofoam. This shift has affected our program over the last two years,” Parker said. “Recently, we have learned of new mills domestically that have slowly started to accept plastics Nos. 3-7. This has strengthened the demand, and we are seeing the price rise significantly. Until plastic is able to bounce back, we are disposing of Nos. 3-7 at the landfill and have been looking at alternative avenues to recycle them.”

The city of Sheridan’s website said that while the ultimate goal of the curbside recycling program was to divert 50% of household waste for recycling, that number presently is 9%, with the rest being green waste, scrap metal and concrete. Approximately 30-40% of the landfill’s waste is currently being diverted for recycling.

Parker said Sheridan’s Nos. 1 and 2 plastics are being sent to be processed at three different locations – two in Colorado and one in Utah. Those mills were chosen primarily because they have trucks available to pick up the materials and transport them for processing.

December’s prices for post-consumer plastic bales was 63.75 cents per pound, compared to 62.97 cents in November, according to Plastics Recycling Update. Payment for color various types of high-density polyethylene (HDPE), bottles, jars and Grade A film is also steadily increasing.

Sheridan Recycling Supervisor Paul Larson said these fluctuations represent a shift in market conditions that balance out the costs of manufacturing plastic products versus the cost of refurbishing.

“Today, we employ a predominantly linear economy for many of the materials we use, including plastics,” said Senior Research Fellow at the National Renewable Energy Laboratory Gregg Beckham. “Many people and organizations around the world are looking at ways to make our materials economy circular.”

The potential opportunity for Wyoming businesses is clear: the state is in great need of plastic recycling plants and transportation to and from those sites. Furthermore, much of the necessary infrastructure and professional knowledge exists in the state. What’s missing is an entrepreneur ready to fill the niche.

The National Renewable Energy Laboratory, the U.S. Department of Energy’s primary national laboratory for renewable energy research and development, offers a public resource called the Material Flows through Industry (MFI) tool, which tracks energy requirements and potential greenhouse gas emissions throughout a manufacturing supply chain. Thus, manufacturers and academics alike are able to access a database of proposed supply chains and calculate the feasibility of new operations. The tool was created using a NREL-sponsored study on manufacturing and greenhouse gas emissions.

Scott Nicholson, a co-author of the NREL study, said the tool provides a comparison of the sources and types of impacts to help identify what parts of new processes can be targeted for improvement.

“We’re constantly looking to add new production processes to the database,” he said. “Researchers can request an MFI account and work with NREL to incorporate their own process data into the tool and calculate impacts for a proposed new supply chain.”

In terms of unmined potential, Wyoming has a lot. There are the traditional resources that have carried the state’s financial burden for decades, and there are also the timely niches emerging from our evolving civilization. Bringing diverse economic opportunities into the borders of the state will only strengthen its financial footing, and post-consumer plastic recycling is one of many opportunities waiting to be brought to fruition.