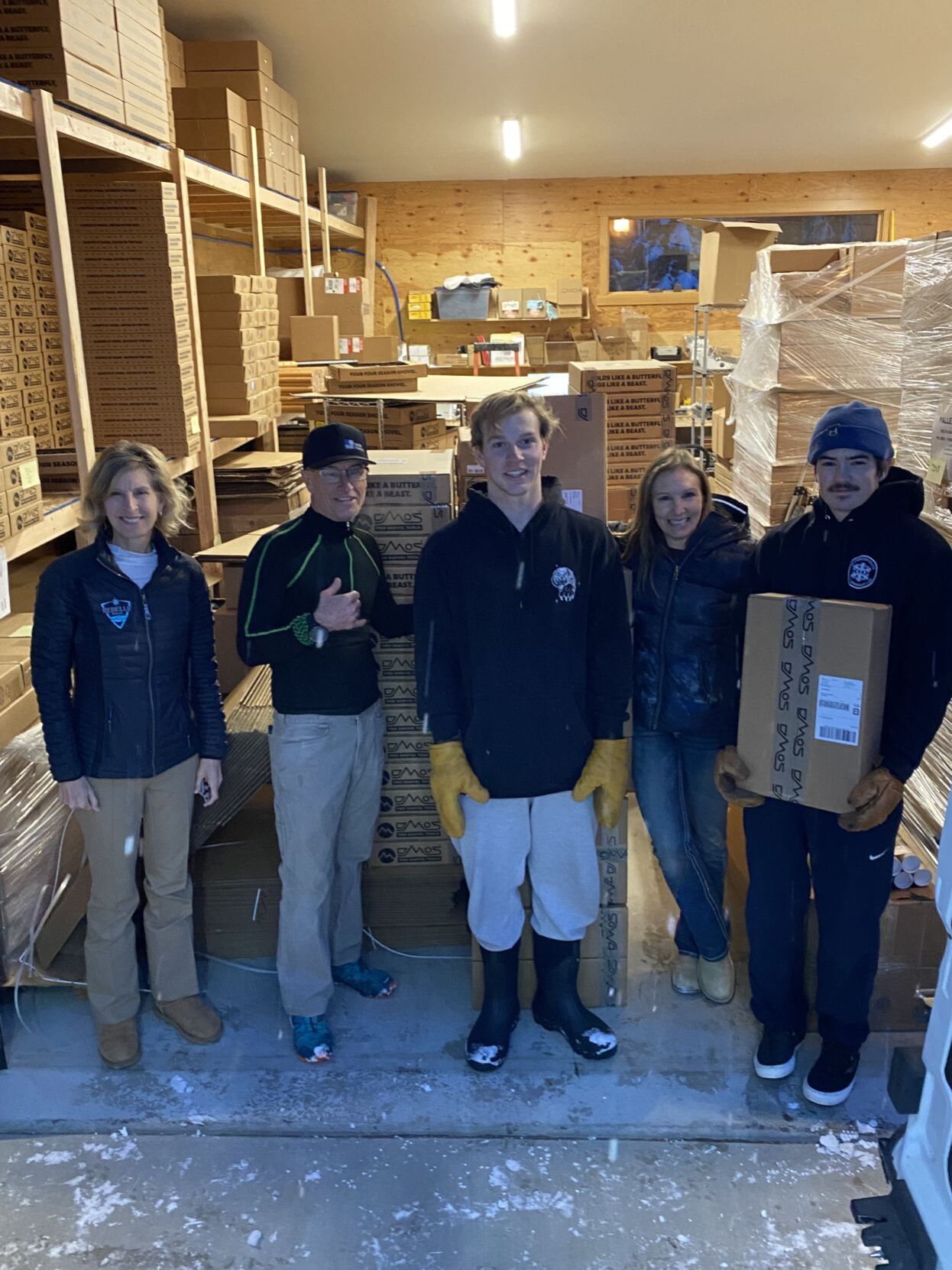 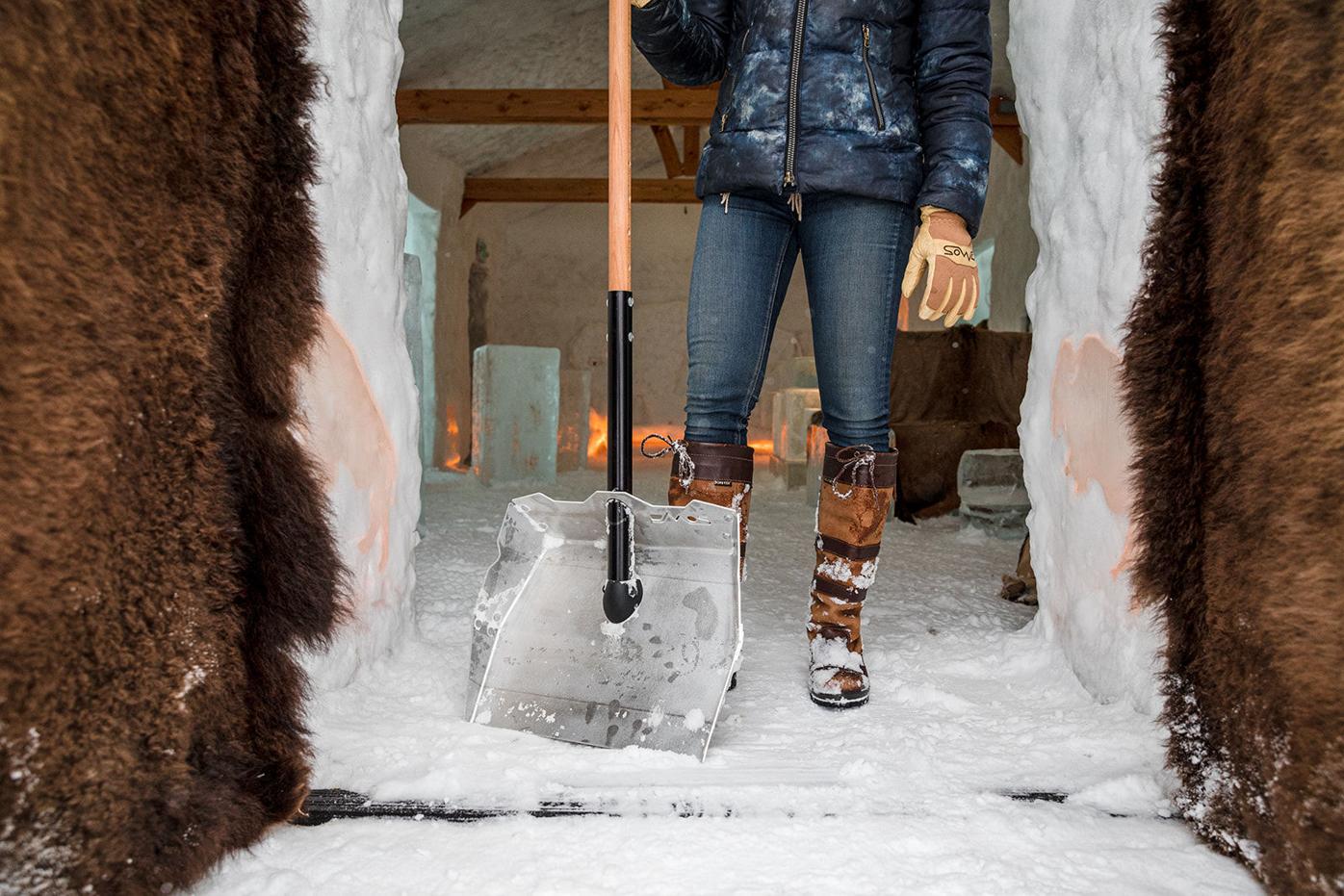 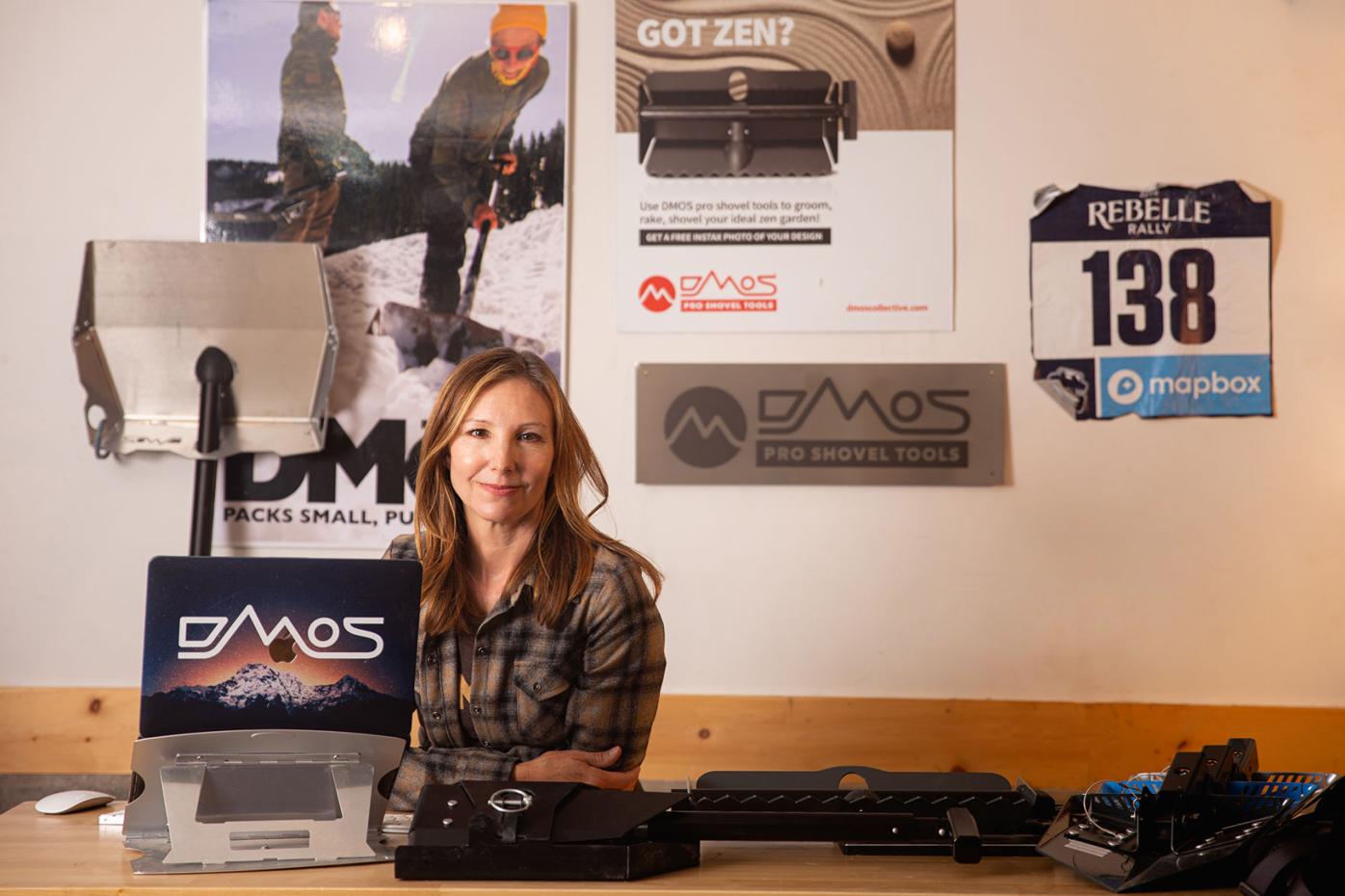 DMOS Collective founder Susan Pieper, recipient of a national Female Entrepreneur of the Year Award in 2016, shows off her new office in Alpine, which she said ended up being the first place she walked into. Mark Wilcox/Wyoming Business Report 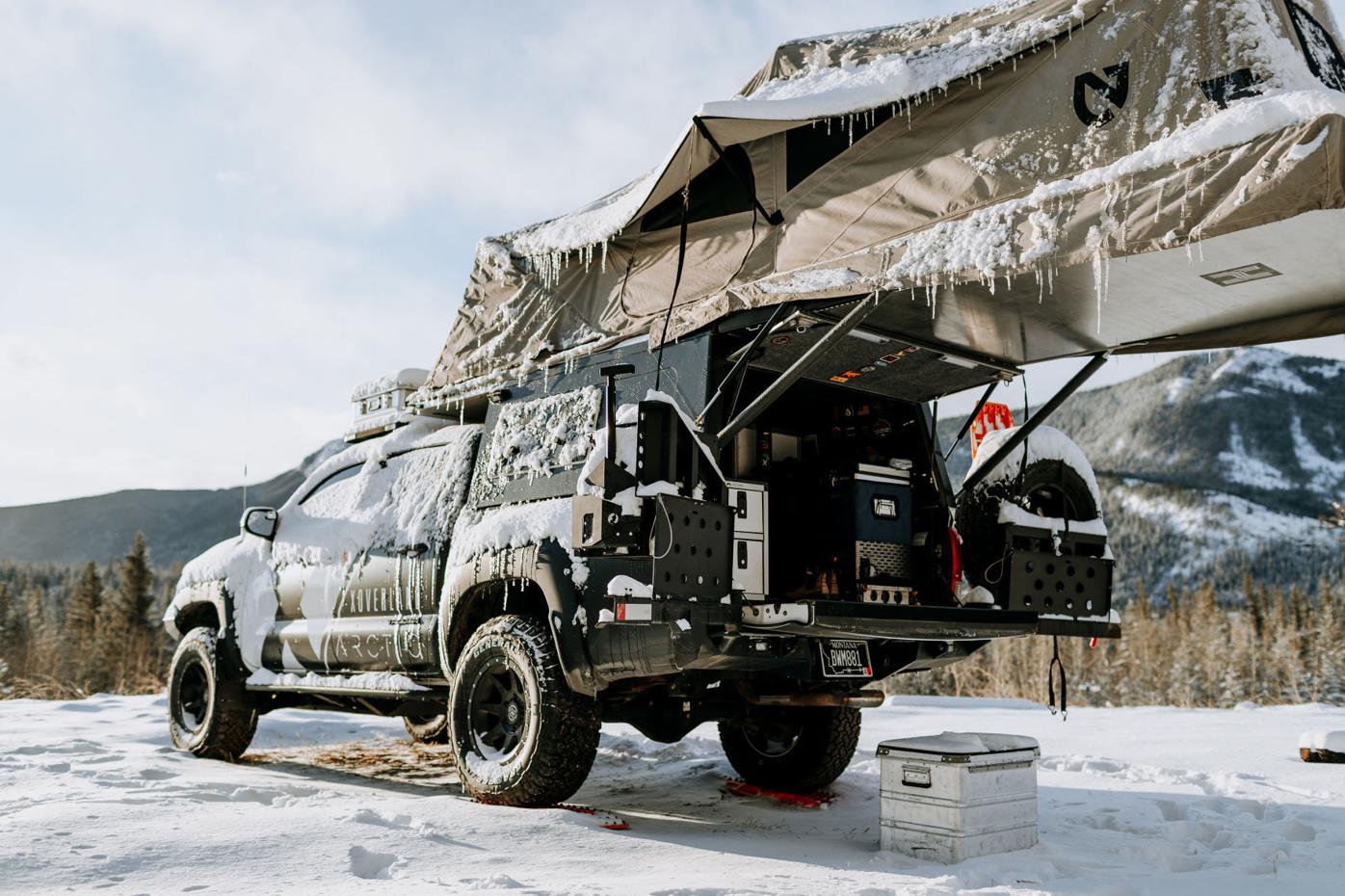 This truck owned by YouTuber's Expedition Overland went to the Arctic on extended camping trips in tough conditions. According to DMOS founder Susan Pieper, they use DMOS shovels on all of their builds, thus validating them to nearly 250,000 subscribers. Courtesy

DMOS Collective founder Susan Pieper, recipient of a national Female Entrepreneur of the Year Award in 2016, shows off her new office in Alpine, which she said ended up being the first place she walked into. Mark Wilcox/Wyoming Business Report

This truck owned by YouTuber's Expedition Overland went to the Arctic on extended camping trips in tough conditions. According to DMOS founder Susan Pieper, they use DMOS shovels on all of their builds, thus validating them to nearly 250,000 subscribers. Courtesy

Spurred by pandemic problems and a desire to grow the company in Wyoming, shovel-maker DMOS Collective dug out its split foundations in Jackson and Portland, Oregon, to settle in Alpine. This during prime buying season while lightweight, portable shovels were flying off the shelves and founder Susan Pieper was simultaneously reorganizing her company.

Pieper, the recipient of a national Female Entrepreneur of the Year Award in 2016, decided on a move to Alpine after a string of hard knocks – both personal and business-related – changed what she wanted from her business.

Soon she was examining other places to set up shop: Boise, Idaho; Denver, Colorado; and Bozeman, Montana, were all on the table. But when she walked into a nearly 2,000-square-foot shop in Alpine, she recognized it as her company’s new home.

“Wyoming is the brand, so I didn’t want to leave,” Pieper said of her recent move. “Wyoming means business.”

Despite the challenges of pandemic-related manufacturing shortages (one popular shovel geared toward off-roaders was sold out for about six months), keeping up with demand, and trimming her staff down to simplify structure and improve processes, Pieper had to jump on the space.

She also found “the only home that would work for her” on the market in Alpine at the same time, pounced on it and quickly sold her Jackson property to make the move, taking advantage of the current seller’s market.

While some worried that the move would bring metal cutting and machine stamping to this remote corner of Wyoming, Pieper said the reality is a little less, uh, industrial. Much of her team, including the marketing team and the part suppliers, remain out of house and often out of state or even out of country. What’s left for the Alpine shop, for now, is some engineering and design, quality control and inspection and order fulfillment.

“This is taping boxes, and a guy in a van picks it up,” she said. And when DMOS reaches the next stage and semis are doing the pickups and drop-offs, it’ll be time to pick up camp – hopefully just to another part of Alpine.

After a number of missteps and personal misfortunes, along with the limits placed on business in Oregon, where Lit Workshop built most of Pieper’s products, DMOS was going through a rough time.

She knew she had to change something. Lots of things, actually.

Besides retooling her team, she also distanced herself from Lit Workshop, seeking out new suppliers regionally and “doubling up,” so that if one bottlenecked production, she can move production to another. Now, most of her suppliers are in northern Utah, a relatively short drive from Alpine.

That keeps her from needing to make the longer trip to Portland, and makes it easier to coordinate, since fabrication can be an involved, personal process.

“I’m thrilled about it,” she said, referring to metal fabricators she’s found closer to home. She said she’d love to work with Wyoming suppliers, too, but her metal fabrication so far has needed to be out of state.

She said she’d love to change that in the future, creating a “concept shop” that could do more than create her own inventory; it could also be a regional metal shop. She envisions it being fairly easy to do finishing, metal cutting and forming in house. At that stage, she imagines building out her own space next to another former Jackson business that recently received a Wyoming Business Council grant to build in Alpine.

If she can create this ecosystem, she’ll be able to customize orders more quickly for “just-in-time manufacturing.” And currently, with what she has in-housed already, she’s more capable of pairing shovel blades with grips and handles to suit customers’ needs.

Pieper chose Alpine for a number of reasons. First, it’s close to the business network she built up in Jackson and across the state.

Second, it tends to attract more tradesmen, the kind of people who do the hard labor, instead of the tourist work or the creative economy in Jackson.

And third, it suits her brand well.

“The Alpine soundtrack is the snowmobile,” she said.

DMOS Collective got its start catering to snowboarders and backcountry skiers. Specifically, she got the idea for her shovel company after hearing her son’s requirements for building backyard jumps. While initially trying to reach the backcountry kicker builder, it soon became apparent that the shovels she made had many uses.

Eventually, DMOS started reaching out to more audiences, including snowmobilers, driveway shovelers, people who wanted a shovel in their car for emergencies, and one that Pieper has a particular affinity toward – off-road racers. Pieper herself has joined – and sponsored – the Rebelle Rally, “the first women’s off-road navigation rally raid in the United States.” The race takes women across 2,000 kilometers of barren Nevada and California desert, navigating through checkpoints along the way.

Shortly after arriving in Wyoming, mechanics encouraged her to buy a truck after ripping the bumper off her Lexus SUV on double-track. And Alpine, she said, is the “Moab of Wyoming.” In other words, it has the kind of off-road trails that should attract people from all over. Chief among them is the Grey’s River Road, a “bad ass pass” that connects Alpine through a mountain corridor to Big Piney, Daniel, Cokeville or La Barge, depending on where drivers want to end up.

She said she’d love to do Jeep rentals that encourage people to take the pass for its “fabulous off-road” and encourage them to hit the trail – of course, with her off-road geared Delta Shovel in the emergency kit onboard.

But these plans and dreams are all future facing.

For now, Pieper is focused on one order at a time. She said DMOS has evolved into a year-round business, instead of a winter-focused one, with the average tickets and amount of orders all trending up.

“We’ve gotten into systems and built them out and cleaned them to really get leverage,” she said.

And leverage, it turns out is just what someone is selling when selling full-length collapsible shovels.

“We got our start in Wyoming with snow shovels, and now we’re really known for off-road and automotive shovels,” Pieper said.