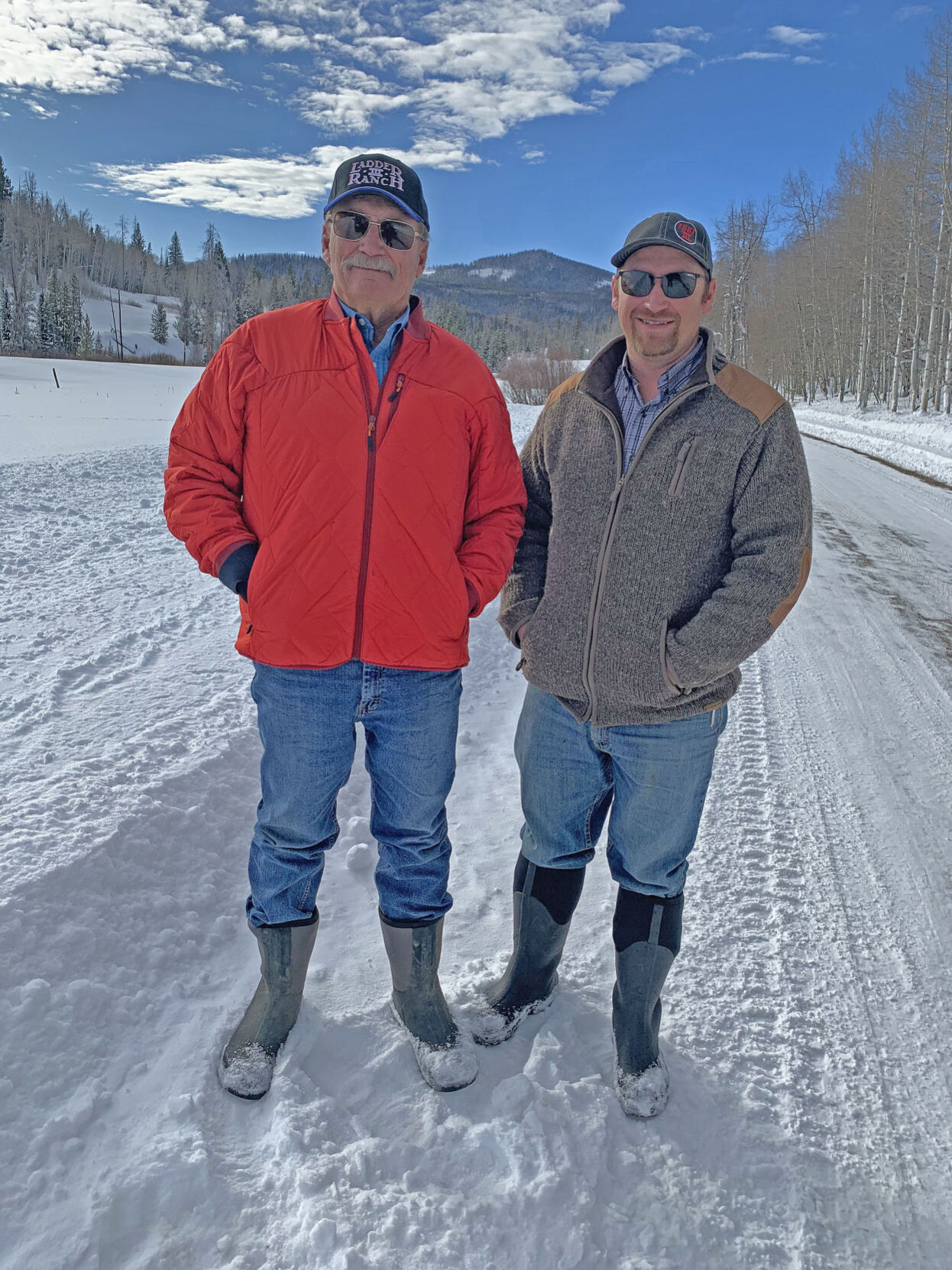 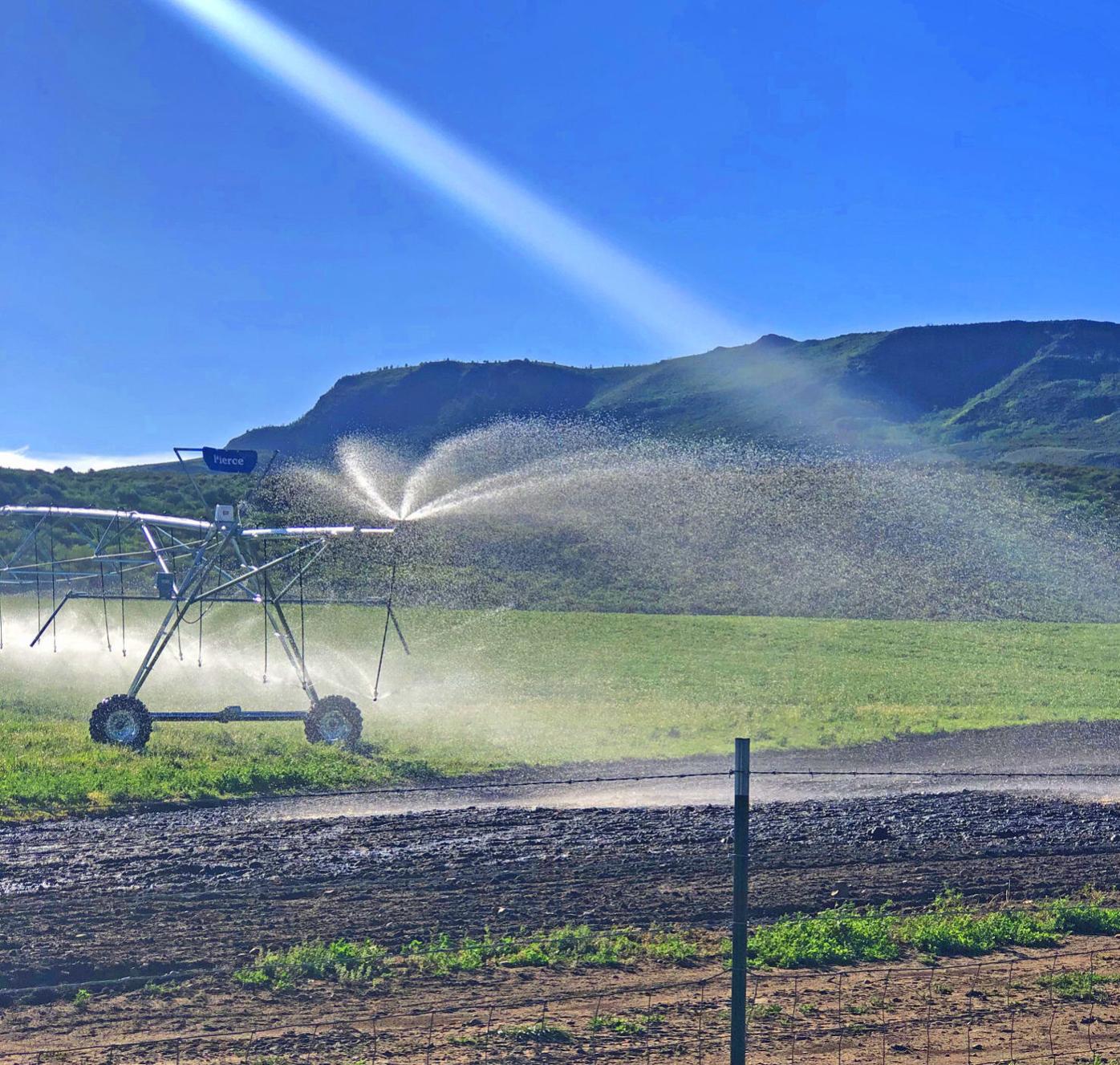 When Monte Lerwick needs information about how his center pivot irrigation systems are functioning, he just checks his smartphone. If there is a problem, a remote-control platform on the pivot sends him a message.

“They'll send you a text or an email to alert you if you lose pressure, lose voltage or pivot shuts down,” said Lerwick, who manages the family owned Homestead Acres, a farm/ranch operation that straddles Wyoming and Nebraska.

With profit margins for farmers and ranchers becoming ever tighter, ways to use technology to cut costs through more efficient operations are more important than ever.

While visual inspections are still part of normal irrigation operations, Lerwick said the need for on-site monitoring has been reduced in overseeing the 1,000 acres of irrigated land managed by Homestead Acres.

Lerwick said he moved from a drip system to the central pivot system a few years ago. Pivot irrigated land is easily discerned as green circles from the air.

“They're a relatively cheap and very effective technology,” he said.

The ability to program the pivot system in the amount of water to be applied, the depth of moisture infiltration and length of application time makes the decision even better, Lerwick added. He uses remote management panels made by AgSense that can be placed on old or new pivots.

A University of Wyoming College of Engineering graduate, Lerwick said he looks for technology that gives him an edge in crop and cattle production. He said it can be overwhelming for producers faced with sifting through the new technology pitched to them by companies.

In addition to the remote control and alert functions, data accessed through an app can instantly be incorporated into reports using spreadsheets or in easy-to-read charts and graphs. Other applications around the farm can be displayed in customizable user interface to give a real-time report of the farm’s operational status.

Lerwick has turned his attention to outer space in an attempt to bring remote monitoring to livestock water tanks, co-founding a technology startup, Meadowlark Solutions LLC, with his father, Ron, and cousin, Damon Printz. While working at Homestead Acres in 2013, Lerwick challenged Printz to come up with a communication device to transmit water levels at the distant tanks. While an A engineering student at Texas A&M, he continued to work on a device through his graduation two years ago. Today, the company is starting to market the device, which includes both satellite and cellular connectivity technologies.

Printz said the system is connected to the Iridium satellite network. Consisting of 66 low Earth orbit satellites, the network boasts of 100% coverage of the planet.

He acknowledged there are many other agricultural product opportunities for developing satellite communication like that offered by the Toad Tank.

“When we get established selling the Toad Tank, then I'll definitely think about branching out,” he said.

Pat O’Toole and his son, Eamon, know the limitations of remote control and monitoring of irrigation systems. The O’Toole family operates the Ladder Ranch near Savery, with about 400 acres of flood and sprinkler irrigated land.

President of the Family Farm Alliance, which represents Western irrigators, Pat O’Toole said some irrigation technologies used in other states, such as California, aren’t practical for Wyoming.

The Ladder Ranch is trying to take advantage of technology as much as everyone else, he said.

“But the flip side really gets down to getting off your horse at times and making sure the water goes the right way,” O’Toole added.

Efficiency is a concern for water users everywhere, he said, but there can also be “too much” efficiency.

“It's important to understand that if you become too efficient, you don't recharge the system, the river and the aquifer,” O’Toole said.

Climate change is pushing back the arrival of moisture on a yearly basis, he said, making it more important that there is adequate storage to provide water for irrigation.

Eamon O’Toole said the ranch’s use of programmable pivot systems is already seeing a return on investment in saving time and manpower needed to monitor irrigation activity.

“If there’s a big rain, we can program the pivots to turn down water an inch,” O’Toole said. “Or if a there’s a heavy rain, we can turn them off for a few days.”

A person doesn’t have to be a computer science major to program the pivot systems, he added.

“They made it so simple, even I can figure it out,” O’Toole said with a laugh.

With using the new technologies, the operators of both Homestead Acres and the Ladder Ranch agree cybersecurity becomes even more important.

Printz is designing his remote satellite and cellular communications system to be encrypted, while Pat O’Toole has a cybersecurity plan in place for all parts of the ranch operations.

The devices increasingly being used in irrigation and other areas of agriculture to monitor all aspects of a farm or ranch operations are part of the Internet of Things (IOT), said Mike Borowczak, University of Wyoming College of Engineering Loy and Edith Harris Assistant Professor of Computer Science. The IOT includes aerial drones, smart watches, refrigerators, washing machines, oil field monitors, wind turbines and thousands more devices used for personal, home and business purposes.

Borowczak, who directs the UW Cybersecurity Education and Research (CEDAR) center, said agriculture is big business and a target for those looking to access networks and devices online.

“It’s not out of the realm of possibility that someone could access an unprotected device or network and ruin this year’s crop or an individual farmer’s crops,” Borowczak said. “A competitor might even try it.”

He said farming and ranching operations are potential targets of cyberattacks that leave ransomware on computers, just as any other businesses.

Being on a ranch in rural Wyoming doesn’t spare an operation from being a target if they have devices connected to the internet. Email, text messages and social media are used by people who access the various IOT devices used on a farm or ranch. Weak or no passwords for accessing systems also invite breaches.

Borowczak advises irrigators and other ag producers to consult closely with their suppliers about what kind of security is built into devices and systems they use. Another important step is to conduct an audit of computers, devices and servers to verify they are protected. That includes a physical audit, as well, to make sure they can’t be accessed with a USB or even stolen.