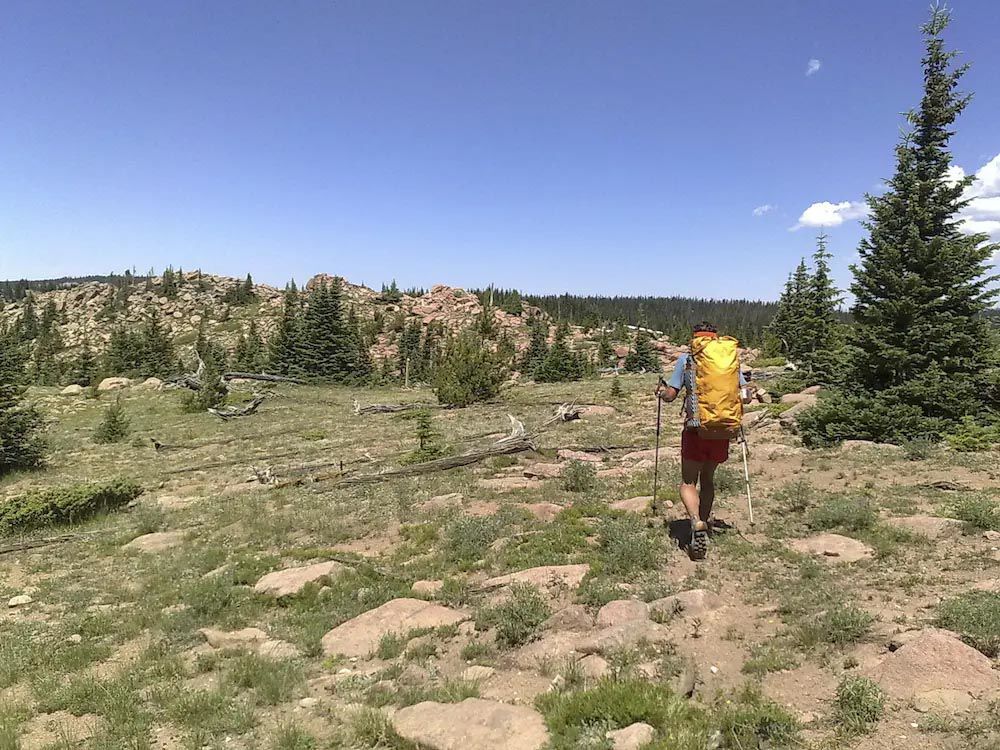 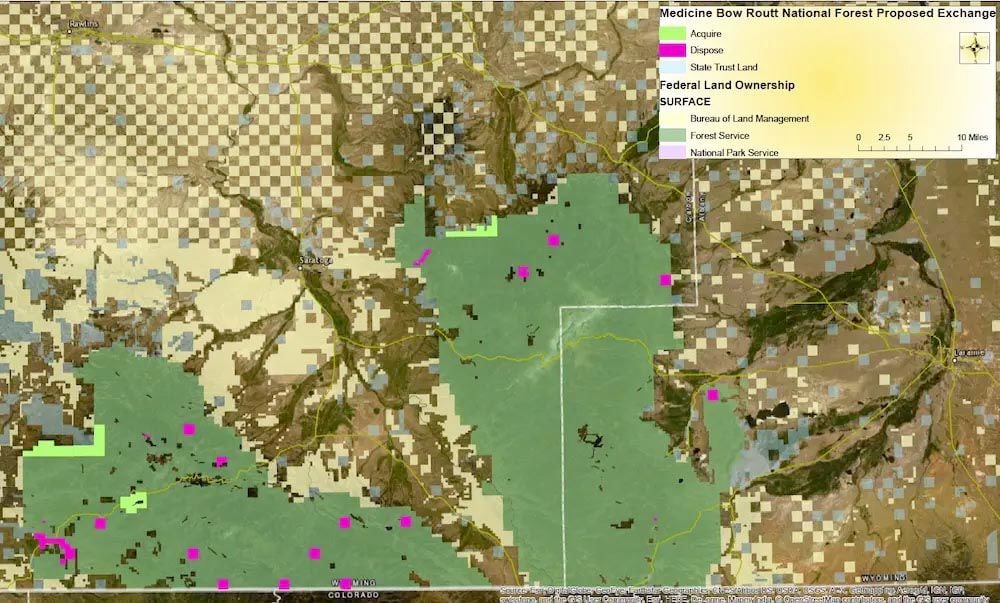 A conceptual map of the lands being examined in the land exchange. Wyoming Office of Lands and Investments

A conceptual map of the lands being examined in the land exchange. Wyoming Office of Lands and Investments

The State Board of Land Commissioners voted unanimously June 3 to support the investigation that conceptual maps show could involve some 12,000 acres of state trust lands in the Medicine Bow. That land would be exchanged for federal property on the forest perimeter plus about 1,350 acres at the proposed site of the West Fork Dam on a tributary of Battle Creek in the Sierra Madre mountains above the Little Snake River.

The values of the exchanged properties would be similar, according to state documents and meeting records. If appraisals value all acreage equally, the potential exchange could involve 24,000 acres or more.

“The idea behind this transaction is to change the ownership pattern” in which state lands are isolated inside the Medicine-Bow and difficult to capitalize on, Jason Crowder, deputy director of the Office of State Lands and Investments, told the land commissioners on June 3. Swapping the state lands for federal lands would enable Wyoming to sell timber and grazing leases and undertake other projects to generate revenue for state-land beneficiaries — mostly schools.

“There is another driver,” Crowder told the board; the proposed West Fork Dam and associated 10,000-acre-foot reservoir that the Wyoming Water Development Commission and irrigators want to construct on the West Fork of Battle Creek. The estimated $80 million (in 2017 dollars) project would benefit 67 to 100 irrigators.

That idea has been controversial, with critics challenging the economic underpinnings of the plan and legislators trimming the amount of appropriated money sought by the Water Development Office. Lawmakers also want Colorado irrigators to pay part of the costs — according to their 26% share of the 20,000 irrigated acres the reservoir would benefit.

The dam would create a reservoir that would inundate some 100 acres of federal land, plus some private land owned by a mining company. It would be more difficult and potentially impossible to construct the dam and reservoir if the site remains federal property, Crowder told the commissioners.

“The Wyoming Water Development Office was looking for a way to help facilitate the construction,” Crowder said in an interview. “They were running into a bit of a roadblock with the Forest Service on Forest-Service-managed land.

“So … the Water Development Office has approached us and they’ve asked, possibly [if] we could do an exchange with the Forest Service,” Crowder told the land commissioners, “where we would make that state land instead of Forest Service land, and then place the reservoir on top of state land at that point.”

The proposal involves land in Albany and Carbon counties, according to conceptual documents presented to the land commissioners. Maps indicate the equivalent of roughly 17 state school trust sections Wyoming would transfer to federal ownership — some 12,000 acres.

The land board, made up of Gov. Mark Gordon, Secretary of State Ed Buchanan, Auditor Kristi Racines, Treasurer Curt Meier and Superintendent of Public Instruction Jillian Balow, unanimously resolved to authorize land office director Jenifer Scoggin to analyze an exchange. The resolution states that the swap has the potential to satisfy the board’s trust responsibilities.

An exchange would create “a more contiguous area of state trust land and increase […] revenue potential; and … may support a community need by facilitating the construction of the West Fork Reservoir,” the resolution reads.

Sen. Larry Hicks, district natural resource coordinator for the Little Snake River Conservation District in Baggs, secured $250,000 for the State Lands and Investments Office to examine the exchange, Crowder told the board.

Dam proponents have been talking to the Forest Service “for years,” trying to find a way to build the dam, Aaron Voos, a Medicine Bow spokesman told WyoFile. “We’ve had multiple meetings and communications.”

Two straightforward avenues for constructing the dam are problematic, Crowder told the board, either one likely requiring preparation of an in-depth environmental impact statement.

One avenue — obtaining a Forest Service special use permit for construction and operation — might not be successful, Crowder said. A second option — transferring Forest Service property directly to the Water Development Office — would be a “very lengthy and in-depth … process” Crowder told the board.

A third alternative — the larger land exchange plan backed by the land board — would involve “a relatively easy environmental analysis,” Crowder told the board, citing the Forest Service. State ownership of the dam site would free dam developers from “the whims of the federal government,” he told WyoFile.

Dam developers “would like that ease[ing] of administrative hurdles to get the reservoir on the ground,” he told the land commissioners.

Forest Service policy provides that “the environmental analysis should focus on the future use and management of the lands acquired and conveyed and the effect of the exchange on the lands that adjoin them,” forest spokesman Voos wrote in an email statement. “Where there is a reasonably foreseeable change in the future use of land involved in a land exchange (such as reservoir development), it would need to be considered in the environmental analysis regardless of the size of the land exchange.

“A range of land exchanges” have been discussed between the state and the Medicine Bow,” the statement said, “some of which … do not involve the proposed reservoir parcels.”

The Forest Service did not attend the land board meeting, Voos said, and the agency statement did not directly address some of the characterizations made there. “Clarification from the State would be needed regarding details of the proposed exchange being discussed,” the forest statement reads.

If Wyoming were to obtain title to the dam site property, it would lease that land to the Water Development Office with payments going to school trust beneficiaries, Crowder told the board.

The plan proposes “parallel processes,” Crowder said. The Natural Resources Conservation Service, an arm of the U.S. Department of Agriculture, would be the lead federal agency analyzing dam construction. The Forest Service, a separate Agriculture Department agency, would focus only on the larger land-exchange.

“It wouldn’t limit the environmental review at all,” Crowder told WyoFile.

The potential 24,000-acre swap grew after the Water Development Office approached the state land office, Crowder said. Instead of limiting an exchange to dam-site property, “we saw an opportunity to go big,” he said in an interview.

There are “all sorts of different size possibilities for that land exchange,” Voos said. “We have been discussing options all throughout what has been years for this proposed project,” he said.

“We are in constant discussion with state lands with those kinds of land swaps,” Voos said. “There is always discussion of consolidation of land management.”

If Wyoming’s investigation leads to a 24,000-acre exchange proposal, “that would be huge,” Voos said.

A swap would involve properties of approximately equal value, those involved have said. “That value isn’t just monetary,” Voos said.

What benefit an exchange has for the American public from a Forest Service perspective also must be scrutinized, he said. If, for example, Wyoming wanted a section of Forest Service land flush with water, it might have to swap similarly watered land of its own, he said.

Wyoming will conduct appraisals and other work based on the land board’s resolution, then return for approval from the board before approaching the Forest Service with the exchange.

The day before the land board’s June 3 public meeting, its members met via Zoom in a closed-door executive session where they heard the proposal, Crowder wrote in an email. The board then asked the land office to bring the matter to them, Crowder said.

The land office on June 2 then amended the next day’s public agenda to include the land swap as a walk-in matter. On June 3 the top five state officials met in a seven-hour, 22-minute session and spent about 10 minutes on the swap, which was the last agenda item and which had been publicized for fewer than 24 hours.

There were reasons for keeping the plan secret and considering it first behind closed doors, Crowder said.

The state lands office maintains a couple of lists of lands it would like to acquire or dispose of, Crowder told WyoFile, including a category I list that is confidential. “Anytime you look at acquiring a piece of property and you make that a public idea, you have an ability [to change] what that market may bear,” he said.

As soon as a potential acquisition is announced, “there’s an opportunity for the market to be impacted and the state [to] pay more than it should,” he said. This applies even to a government-to-government land exchange such as the one Wyoming is considering, he said.

Wyoming public meeting laws allow closed-door executive sessions “to consider the selection of a site or the purchase of real estate when the publicity regarding the consideration would cause a likelihood of an increase in price.” The proposed exchange meets that definition, Crowder said.

“What the board approved was our ability to move forward in the analysis phase. The state land office then returns with a firm proposal for a public meeting.”

The public shouldn’t feel cut out of state decisions, he suggested.

“This isn’t the only time the board’s going to have an opportunity to hear from the public,” he said of the June 3 meeting. There will be another public meeting before the State board of Land Commissioners authorizes the land office to submit a proposal to the Forest Service, he said.

The on-channel concrete dam would create a reservoir with a 130-acre footprint when full and have an average of 94 acres of water surface. The lake would be about 226 feet deep at the dam. Some of the acreage that would be inundated is owned by the American Milling Company of East St. Louis.

Proponents of the West Fork Dam describe “a model project” for the drought-plagued Colorado River Basin. Detractors fear a pork-barrel boondoggle in the making. A Wyoming Water Development Office study pegged public benefits of the project at $73.7 million, qualifying it for $73 million in state grants. That would relieve benefiting irrigators of the usual 33% funding responsibility, decreasing their commitment to 8%.

Critics have said the project amounts to a $700,000 subsidy to each involved rancher. Some legislators have said the per-acre foot price is 1,000 times the cost of other water in Wyoming.

The Savery-Little Snake River Water Conservancy District launched the dam and reservoir project with a request to the Wyoming Water Development Office, according to state documents. Proponents recently secured a $1.25 million grant from the Natural Resources Conservation Service, plus a similar amount from the WWDO, to conduct an environmental review under the National Environmental Policy Act.

U.S. Fish and Wildlife Service and the U.S. Environmental Protection Agency will be cooperating agencies, according to a project update presented recently to the Yampa White Green Basin Roundtable, a Colorado consortium of water users. The NRCS must evaluate agriculture, watershed protection, recreation fish and wildlife, water quality, flood prevention and municipal and industrial water supply, according to the update memo.

From the reservoir, 6,500 acre feet would be tagged for irrigation storage, 1,500 acre feet to maintain a minimum bypass flow in the West Fork of Battle Creek. “High elevation strategic storage … can mitigate the impacts of climate change while benefiting agriculture, rural communities, environmental improvements in water quality, fisheries, candidate [threatened and endangered] species and provide significant recreational benefits to the regional economy,” the memo states.