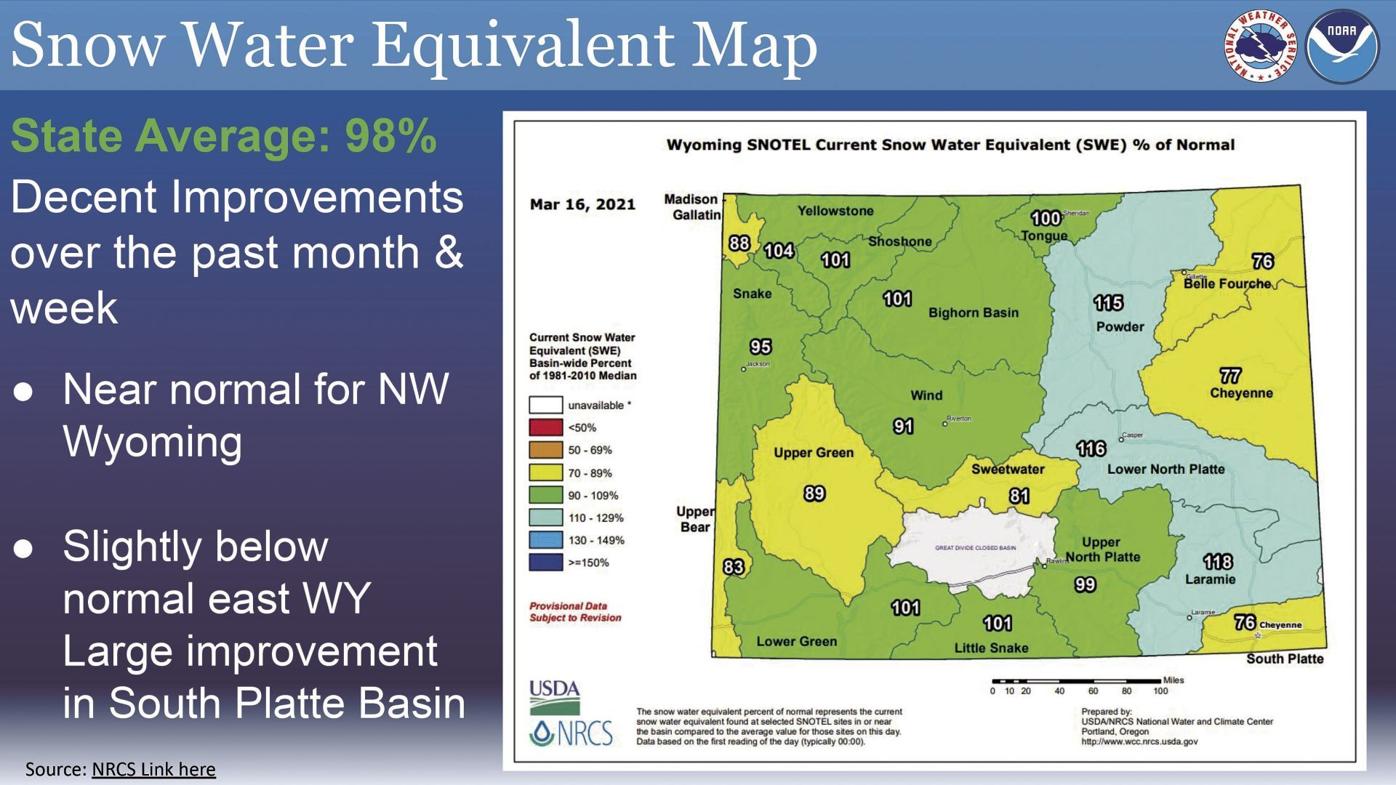 Snow/water equivalent map showing the snowpacks across the state and the percentage of normal. National Weather Service graphic 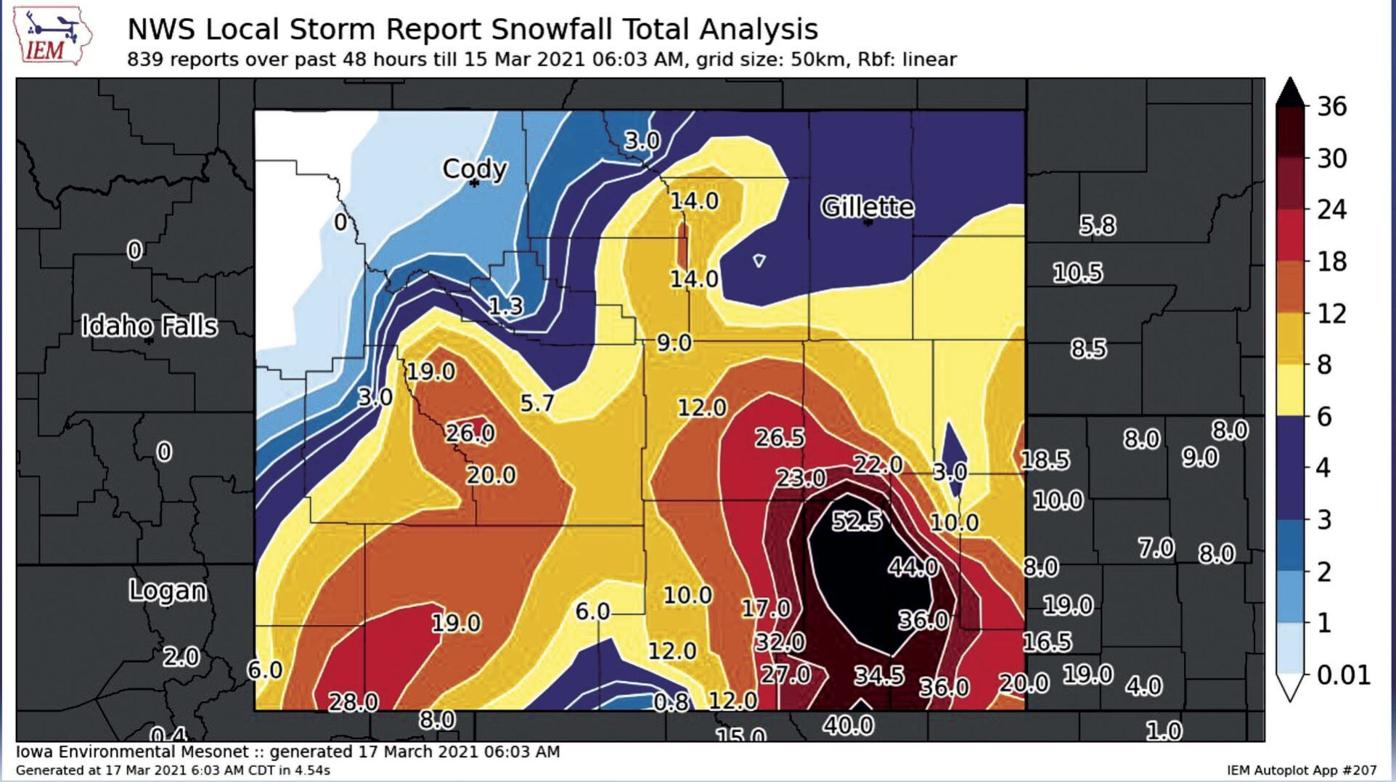 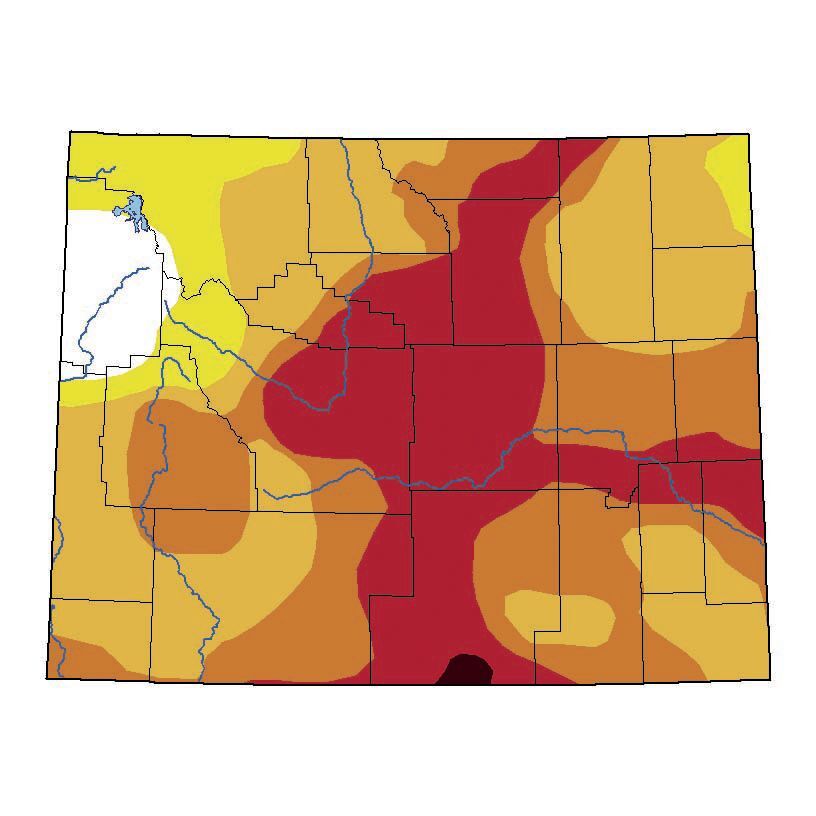 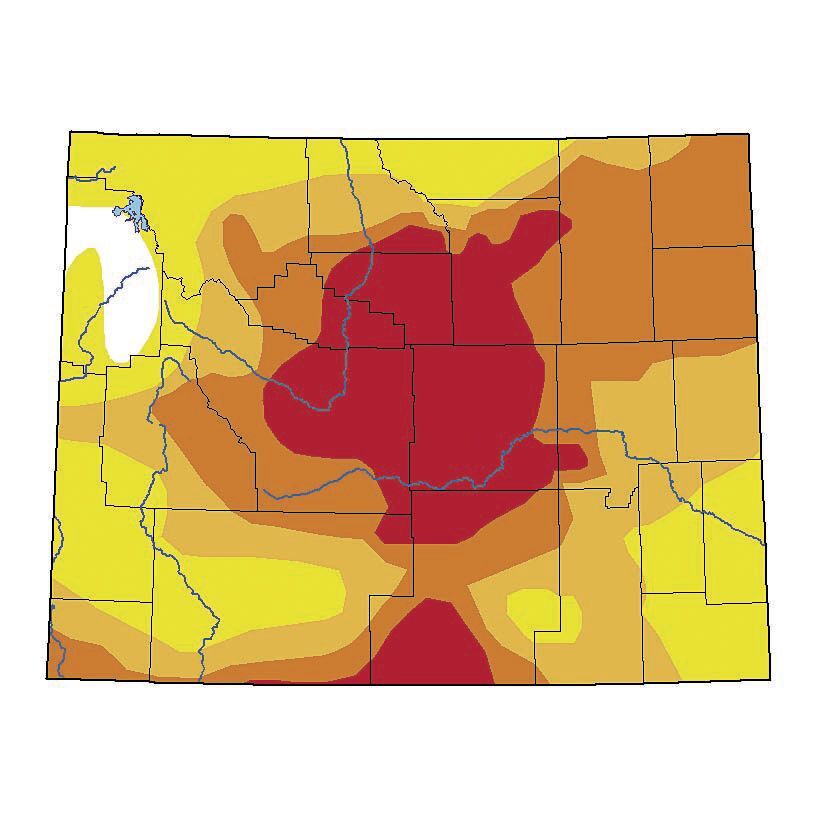 March 16, 2021 drought map: The exceptional drought area is gone and the extreme drought areas (red) have been reduced. NOAA graphic

Snow/water equivalent map showing the snowpacks across the state and the percentage of normal. National Weather Service graphic

March 16, 2021 drought map: The exceptional drought area is gone and the extreme drought areas (red) have been reduced. NOAA graphic

“We had quite a weekend,” Allen said. “A significant winter snow event, with Wyoming on the cold side of the storm getting wet, heavy snow.”

The impact of this moisture, he said, helped push fire season back a couple of weeks across the region – it normally starts at the beginning of March, then kicks into high gear between mid-June and mid-September – the first time in Allen’s recollection that fire season has been pushed back, instead of ahead.

Allen was also concerned about what happens when as much as 52.5 inches of snowfall – the official tally at Windy Peak, north and west of Cheyenne – begins to melt. This could create ice jams on the region’s rivers, causing flooding.

Those two indicators alone are quite different from the outlook just a month and a half ago.

It left some 95% of the state “abnormally dry” – quite a change from 2019, a wet year across Wyoming and the region.

As a result, at the end of January, the U.S drought monitor for Wyoming classified 26% of the state in “extreme drought,” one step above the “exceptional” drought classification, the most severe drought measure. Only 4% of the state had no dry or drought conditions by the end of January. Soil moisture was “abysmally low,” with 2020 being the fifth-driest year since 1895, Tony Bergantino, acting director of the Water Resources Data System in the Wyoming State Climate Office, told WyoFile.com.

The last time Wyoming saw such a drought was in 2012-13, when drought maps had the southern two-thirds of the state in exceptional drought.

“Snowmageddon” brought about 2 inches of precipitation to the region. As a result, there was a drastic change in snow/water equivalent amounts across the state, Allen said.

“The water budget looks healthy and normal now,” he said.

Snow/water equivalents are how hydrologists and water managers measure the amount of life-giving liquid water in snowpack when it melts.

Statewide, prior to the storm, this number stood at about 75% of normal.

As a result of the storm, that number is now 100% or plus in many areas, Allen said. Where the storm hit hardest, between Arlington and Gillette, the numbers range from 115% to 118%.

Brad Pugh of the National Drought Mitigation Center in Lincoln, Nebraska, noted that the storm “eliminated precipitation deficits” and resulted in “precipitation surpluses” for the past 90 days for much of the Central Plains. As a result, a broad one-category improvement was made for drought areas that received an inch or more of precipitation.

Cheyenne, meanwhile, remains at 76% of normal – although Allen pointed out that most of Laramie County’s winter and early spring moisture comes between March and mid-April.

“Unfortunately, while this was a shot in the arm and brought the playing field up a bit, it didn’t end the drought – far from it, especially in some places,” Bergantino said.

Nearly 70,000 people bathe in, drink and otherwise use the water delivered to the city by Cheyenne’s Board of Public Utilities.

Cheyenne’s water supply comes from two sources, according to BOPU:

About 30% comes from four well fields and 35 wells west and northwest of the city.

The bulk, 70%, originates in the Medicine Bow and Laramie mountain ranges’ snowpack. This snow melts, runs into mountain streams, then into a series of man-made basins in a complex three-part system that moves that water from the mountains to Cheyenne.

That’s why snowpack is so important. No snow, no water.

BOPU monitors snowpack with automated weather stations in the mountains so it can better manage the supply for the city.

Currently, BOPU says its reservoirs are at 100% and the expectation is that they will remain so.

What about rural water?

People – and there are about 40,000 of them – outside Cheyenne in Laramie County rely on groundwater to feed their rural wells.

Groundwater reservoirs accumulate water that percolates through the soil, down into the ground and hold it, usually within the rock structure deep within the Earth.

With drought conditions still in view, how did the storm impact groundwater?

“I’m concerned about soil moisture, which has been seriously dry for months now,” said Bergantino. “It was around the 10th or less percentile for most of the state. It is still bad for some parts such as the West, Southwest and Northeast, as well as the Bighorn Basin, but it has improved, especially on the Plains, where it has gone to the 10th to 20th percentile, for the most part.”

“Snow/water equivalent on the Plains had been around 5% of average, but in the east and central parts is now over 300%,” he continued. “Now that we’ve had some warmer days and the snow starts to melt, we are starting to see responses down to about 20 centimeters (almost 8 inches) from some of the stations, and I expect to see it soon at deeper depths.”

Bergantino said snow monitoring also showed some improvement in the eastern portions of the state, but only enough to bring basin-wide snowpacks up to around the midpoint in places, a bit more in others. The exception was the northeast, still an area of concern.

Allen said he could offer some speculation, but not hard facts.

“At the moment,” he said, “there is a frost depth that would initially repel absorption (into the soil). However, this snow is deep, and some amount of moisture will be absorbed with melting snow for days or weeks.”

Last weekend’s storm is what triggered drought monitoring to bump the status of Wyoming’s drought up a notch.

“This was accounted for in the drought monitor over the past week,” Allen said. However, this is only a short-term impact.

“Over the longer term, the question is, can we get more moisture?” Allen said.

The outlook isn’t too great, Allen said. According to National Weather Service predictions, the next three months are likely to be drier than normal in terms of precipitation. This is the result of La Nina, a weather pattern that occurs in the Pacific Ocean.

Under the influence of La Nina, strong winds push warm water at the ocean’s surface from South America toward Indonesia and Australia. As this warm water moves west, cold water from the deep rises to the surface along the South American coast and influences weather systems worldwide.

For the U.S., this influence usually means drier, warmer winter weather in the Southwest and colder, wetter winters in the Northwest. Depending on how this falls, Wyoming can be caught in the middle of these two cycles, but usually ends up with drier, colder winters.

Allen expects La Nina to weaken through the summer months, but cautions that it could return next winter, resulting in a longer-term drought.

However, during the February-March weather recap, he also noted that the jet stream may shift farther south during March and April, which could bring some moisture.