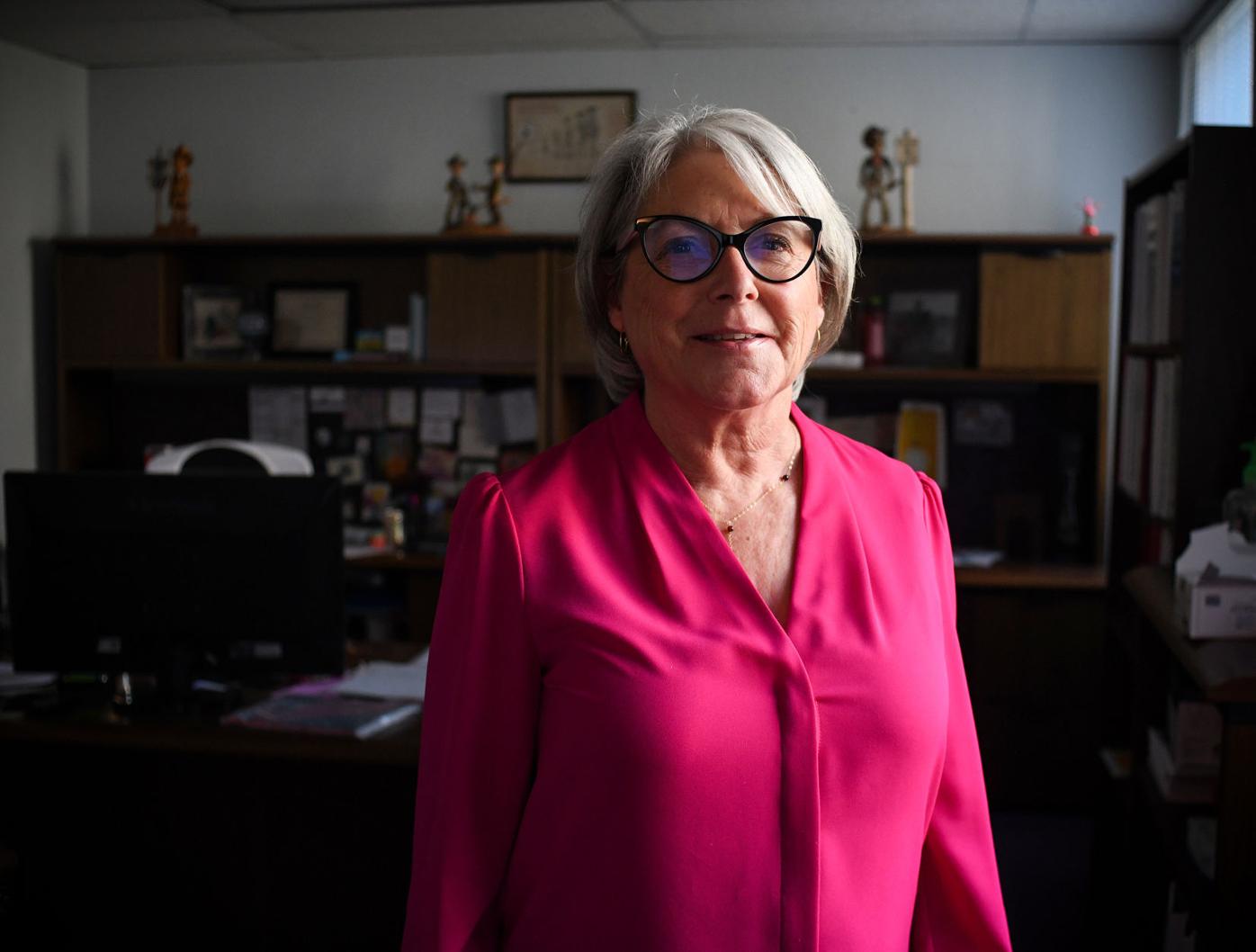 Kathy Emmons, executive director of the Cheyenne-Laramie County Health Department, stands for a portrait in her office on Thursday. Emmons is leading her staff through fighting both the coronavirus and an onslaught of misinformation, which she said she does by trying to be as transparent as possible. Rhianna Gelhart/Wyoming Tribune Eagle 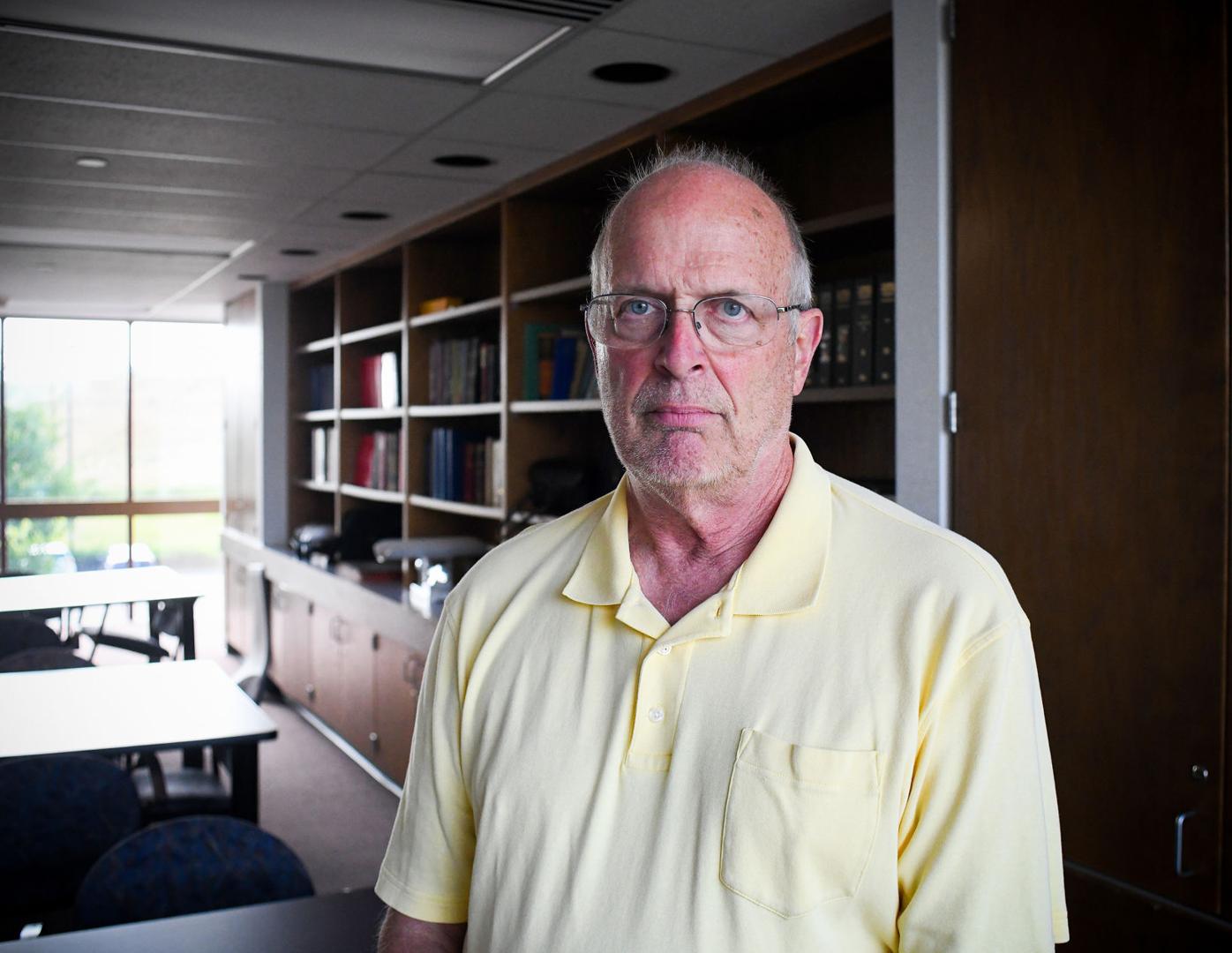 Laramie County Health Officer Dr. Stan Hartman stands for a portrait at the Cheyenne-Laramie County Health Department on Friday. Hartman said of the ongoing issue with trust and misinformation, “That puts us in the position in public health of fighting two pandemics: the actual disease, and all the misinformation and disinformation and distrust. And the two of those together are combined to make a real serious problem.” Rhianna Gelhart/Wyoming Tribune Eagle

Kathy Emmons, executive director of the Cheyenne-Laramie County Health Department, stands for a portrait in her office on Thursday. Emmons is leading her staff through fighting both the coronavirus and an onslaught of misinformation, which she said she does by trying to be as transparent as possible. Rhianna Gelhart/Wyoming Tribune Eagle

Laramie County Health Officer Dr. Stan Hartman stands for a portrait at the Cheyenne-Laramie County Health Department on Friday. Hartman said of the ongoing issue with trust and misinformation, “That puts us in the position in public health of fighting two pandemics: the actual disease, and all the misinformation and disinformation and distrust. And the two of those together are combined to make a real serious problem.” Rhianna Gelhart/Wyoming Tribune Eagle

CHEYENNE – When COVID-19 began to take over public consciousness in the U.S. around March 2020, public health departments set to work, tasked with providing the best information, resources and preventative care possible at the time to their communities.

Normally, when focusing on things like immunizations, family planning and environmental health, these government officials are not typically the center of controversy. But as they’ve tried to promote public health initiatives like masking or vaccinations against COVID-19, they’ve seen an unusual level of vitriol directed their way. Some elsewhere in the country have actually left their positions because of threats and extreme public pressure.

“We are a provider – we’re providing a positive service to our public. And, all of a sudden, it became all this negative flashback, and I think that’s been incredibly hard for my staff,” said Kathy Emmons, executive director of the Cheyenne-Laramie County Health Department. “It was real hard for me, because I’ve never been in a position where it’s been quite that bad.”

Some of the pushback has come in the form of distrust, which Emmons said has to do with a belief that anyone involved with government has an ulterior motive, rather than a public health department’s stated goal of preventing illness and promoting good health in a community.

Laramie County Health Officer Dr. Stan Hartman attributed some of this institutional distrust to ineffective communications strategies from places like the Centers for Disease Control and Prevention. Though some mistrust of the government and other institutions can be healthy, he said, in situations like a pandemic, it creates significant problems.

“I give the CDC an ‘A’ in getting the science right, with a ‘C’ or a ‘D’ in communication, because it leaves a lot of people confused. The recommendations change frequently, and I understand that the recommendations will change when the science changes, but they don’t do a very good job of explaining that to the public,” Hartman said. “They just come up with a different recommendation that leaves people confused. And when people are confused and mistrustful to start with, then you get into all the misinformation, disinformation, conspiracy theories and stuff that gets spread on social media and the internet.

Hartman said former President Donald Trump and his administration deserves all credit for Operation Warp Speed and the development of safe, effective COVID-19 vaccines. But in downplaying the severity of the virus, discouraging mask use and floating scientifically unproven treatments, Trump did the public a disservice.

Emmons is no stranger to taking criticism or having distrust directed at her because of her job. She’s worked in various governmental positions, and she and Hartman were both active during the H1N1 pandemic, she said. In the 1980s, she helped set up counseling and testing sites for HIV and AIDS in Wyoming.

Still, being in her current position during the COVID-19 pandemic has been the most frustrating – mainly because she hasn’t been able to shield her staff from anger and aggression directed their way.

And lot of this can be attributed to the internet, she said.

But local public health officials aren’t sitting around feeling sorry for themselves. Despite frustration that case numbers are back to where they were in December – the downslope of the state’s late November peak – State Health Officer Dr. Alexia Harrist said there are still reasons to be hopeful: a greater understanding of the virus, more information about how to prevent transmission, and three safe and effective vaccines, which protect against serious illness and death.

“We try to stay focused on the priorities,” Wyoming Department of Health spokesperson Kim Deti said. “We know what our priorities are, and so we just try to keep advancing them with the tools that we have available.”

Making sure “there’s nothing left that’s not been said”

Between May 1 and Aug. 24, more than 96% of new COVID-19 cases among people 12 years and older in Wyoming were among those who did not report being fully vaccinated, according to data from the Wyoming Department of Health. With 11,268 total cases – both lab confirmed and probable – during this period, 397 were breakthroughs, or cases among fully vaccinated people.

During the same period, about 95% of people 12 years and older with COVID-19 who ended up in the hospital were not fully vaccinated. Of the 462 who reported being hospitalized, 20 were fully vaccinated.

With the caveat that there may be “significant delays in the filing of death certificate information,” Deti said, there were 95 confirmed COVID-19 deaths during that period, with seven being people who were fully vaccinated.

May 1 was chosen as a start date because, as of that date, vaccines were available to anyone in the state, Deti said.

Despite the reported effectiveness of the vaccines, just 35.4% of Wyoming’s total population had been fully vaccinated as of Aug. 30, according to state health department data.

On Thursday, the state’s seven-day average of new lab-confirmed cases was about 371, where it had been about 40 two months ago, Harrist said. The rolling 14-day test positivity rate was at close to 10%, after being at less than 3% two months ago. More than 200 people in the state were hospitalized with COVID-19.

“That number is too high. It is placing serious pressure on our health care systems in Wyoming at a time when we also know the same pressure is being placed on hospitals in other states that we often rely on to transfer our patients to,” Harrist said.

With the emergence of the delta variant, the state is also seeing a greater number of cases and hospitalizations in children than it had previously, Harrist said.

Wyoming does not have any pediatric ICU beds in any of its hospitals – not just during the pandemic, but ever, Deti said.

“We have to rely on those neighboring state specialized facilities. And so if they’re impacted, that’s a problem for us, too,” she said.

Deti said that, largely, the Wyoming Department of Health’s communications strategy hasn’t changed since the beginning of the pandemic: disseminating information to the public, speaking with the news media, providing the best possible information on its website, encouraging people to seek out credible sources. Last summer, the department began a campaign of paid advertising and messaging.

Part of Emmons’ leadership style is to be as transparent as possible, she said. As a result, part of City-County Health’s communications strategy since the beginning of the pandemic has been responding to both questions and false information in the comments of the organization’s Facebook posts.

For both City-County Health and the state health department, the goal is to respond with scientifically backed information from reputable sources, whether its a one-on-one phone conversation with a mother wanting to learn more about masks, a person asking questions at a school board meeting or a Facebook commenter.

On Tuesday, Aug. 31, Dr. Hartman sent a two-page letter to Laramie County school districts, urging them to adopt guidelines from the CDC and American Academy of Pediatrics, including masking. Neither school district currently has a masking requirement for students or teachers.

On Monday, Aug. 30, 52 children in the county were COVID-positive, and 254 were quarantined and out of school. By Friday, Laramie County School District 1 was reporting 708 quarantined students, or about 5% of the districts 14,000 students.

“This steady increase in new infections in people less than 18 years of age is an ominous trend, and we are concerned that unchecked spread of the aggressive delta variant in the schools will cause a large increase in cases in this age group,” Hartman wrote. “For each one positive person with the delta variant, eight to nine others are being infected, as opposed to the one to two positives from the original COVID virus.”

Still, according to health officials, one of the biggest successes of the pandemic has been the partnerships they’ve built and maintained with other governmental bodies – even if they don’t always agree or quickly implement their recommendations.

“We continue to work with both school boards and school districts – we’ve had numerous good conversations with them. It’s a process,” Hartman said. “We all know kind of where we need to be. We just have to collaborate to figure out how to get there.”

Public health officials in Wyoming say they're fighting a twin pandemic as they work to distribute scientifically backed information about COVID-19 and encourage preventative measures amid rampant misinformation.