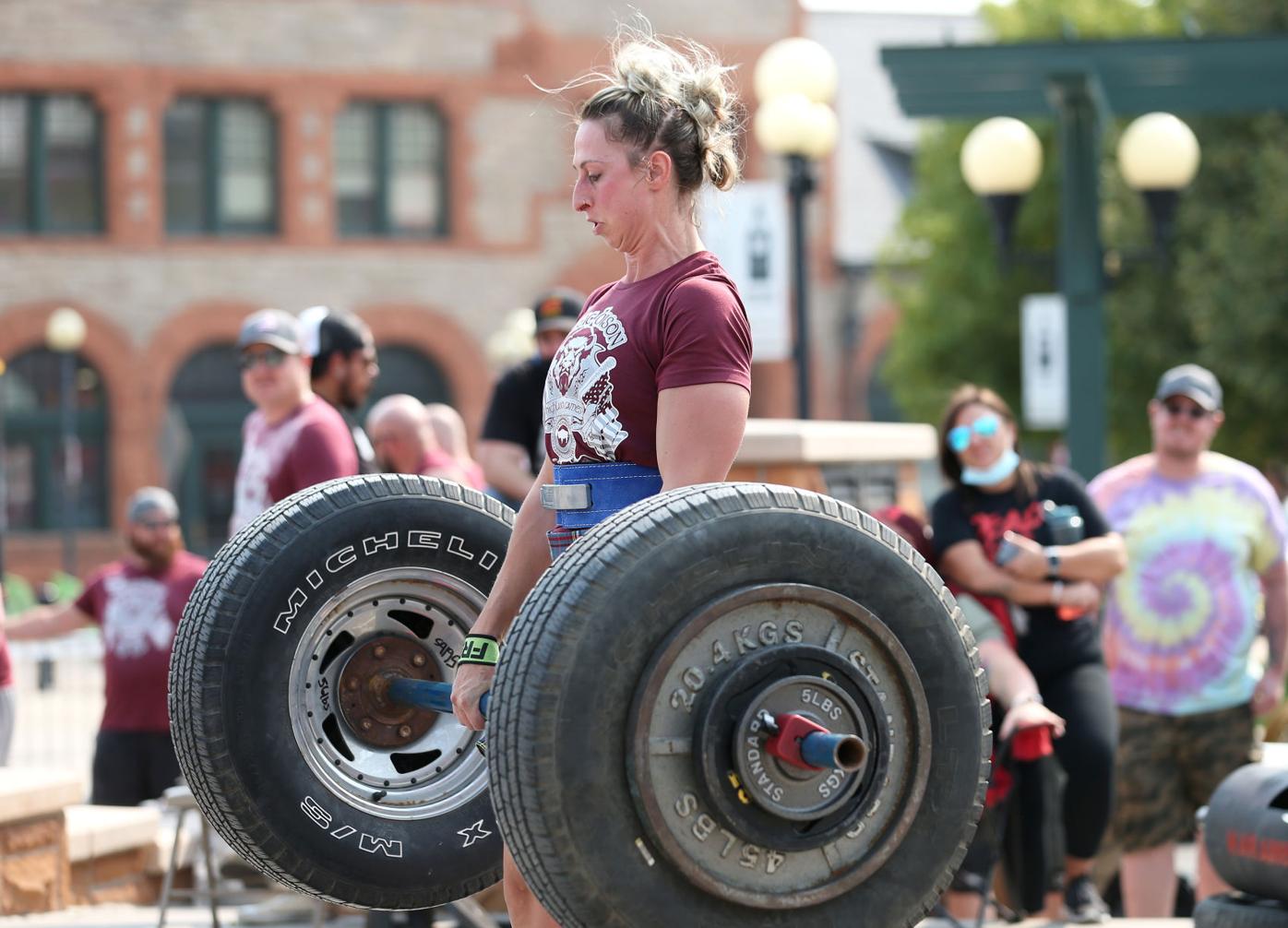 Jalyn Anderson of Laramie lifts 300 pounds during the 2020 Celtic Bison Highlander Strength Competition Friday, Sept. 18, 2020, at the Depot Plaza in downtown Cheyenne. The strength competition is a part of the Cheyenne Celtic Festival, which continues from 10 a.m. to 4 p.m. today and Sunday at Dunbar Field in Lions Park. Michael Cummo/Wyoming Tribune Eagle 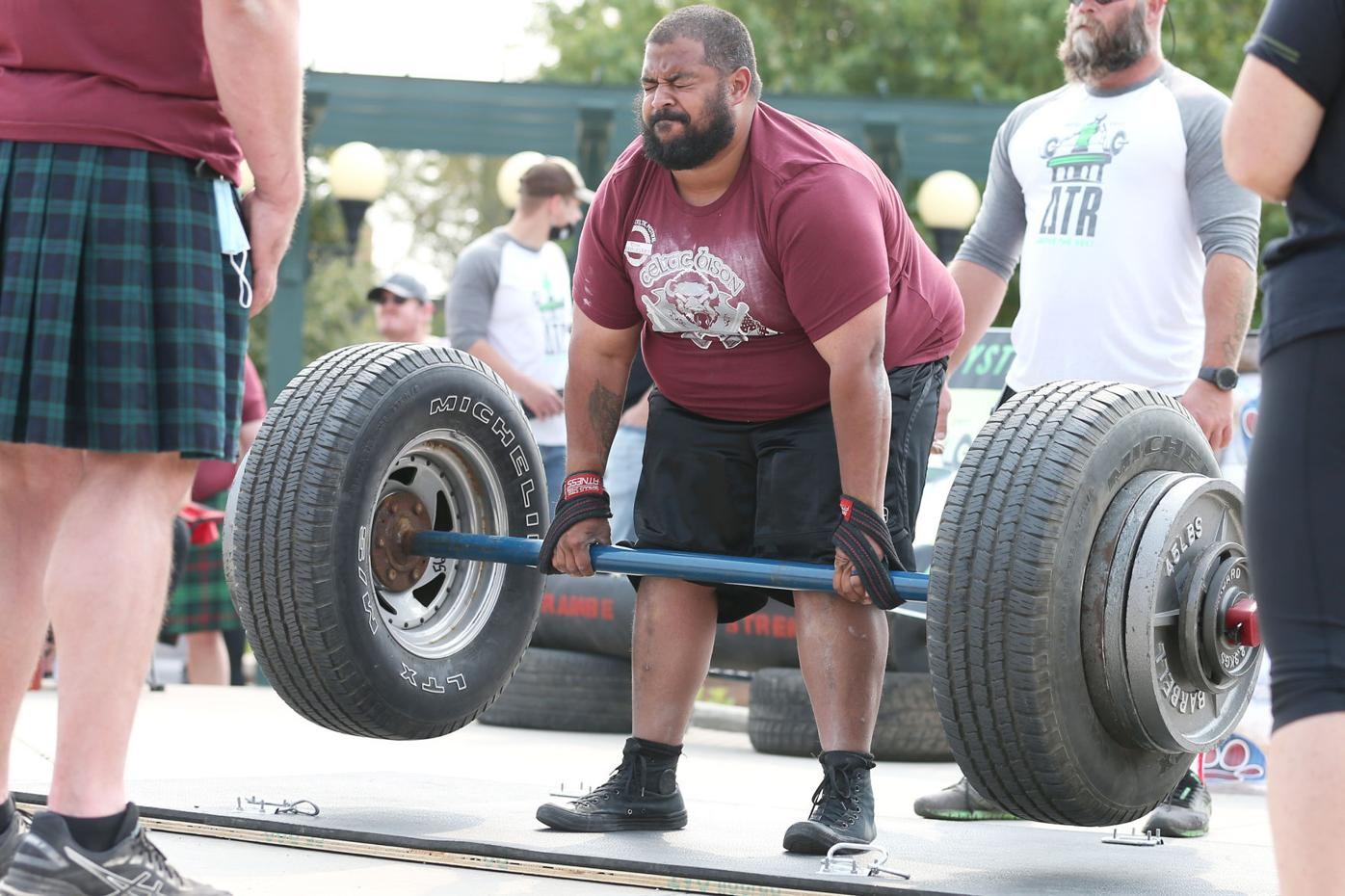 Matt Crandall of Cheyenne lifts 450 pounds during the 2020 Celtic Bison Highlander Strength Competition Friday, Sept. 18, 2020, at the Depot Plaza in downtown Cheyenne. The strength competition is a part of the Cheyenne Celtic Festival, which continues from 10 a.m. to 4 p.m. today and Sunday at Dunbar Field in Lions Park. Michael Cummo/Wyoming Tribune Eagle

Jalyn Anderson of Laramie lifts 300 pounds during the 2020 Celtic Bison Highlander Strength Competition Friday, Sept. 18, 2020, at the Depot Plaza in downtown Cheyenne. The strength competition is a part of the Cheyenne Celtic Festival, which continues from 10 a.m. to 4 p.m. today and Sunday at Dunbar Field in Lions Park. Michael Cummo/Wyoming Tribune Eagle

Matt Crandall of Cheyenne lifts 450 pounds during the 2020 Celtic Bison Highlander Strength Competition Friday, Sept. 18, 2020, at the Depot Plaza in downtown Cheyenne. The strength competition is a part of the Cheyenne Celtic Festival, which continues from 10 a.m. to 4 p.m. today and Sunday at Dunbar Field in Lions Park. Michael Cummo/Wyoming Tribune Eagle

We still can’t travel to most countries right now due to the ongoing COVID-19 pandemic, but what if you could experience another culture without leaving Cheyenne?

The Cheyenne Celtic Festival is back in full swing, and organizer Ryan Seckman is ready to remind residents and visitors alike how good it feels to gather again.

“I’m excited for the fact that we’ll be able to have a full festival, in general,” he said. “Cultural community events are really good times for the entire community to get together, and I think the biggest part of it is the opportunity to learn. I’ve been doing this for 20 years, and I learn something new every year.”

This year, the piece of Celtic history that he’s learned more about is the role of certain dog breeds in Celtic history. Expert Shannon Nell will have her own booth at the festival, where she’ll show dogs of various Celtic breeds, including Scottish Deerhound, Scottish Skye Terrier, Scottish Cairn Terrier, English Greyhound, English Lakeland Terrier, Welsh Sealyham Terrier, Irish Wolfhound and more.

Nell came to the festival two years ago to show some dogs, but now she’s back with six whole tents worth of animals to show and educate the public about.

“She’s not just someone there with a dog to pet,” Seckman said. “It’s an educational opportunity to learn why they’re of value and why we should keep maintaining their bloodlines.”

But there’s plenty of other things to look forward to in addition to the dogs, Seckman promised, so here’s a breakdown of this weekend-long festival.

Friday, June 11, is the first day of the festival, kicking off at 10 a.m. at Cheyenne Depot Plaza, 121 W. 15th St., with the Celtic Bison Highlander Strength Competition. The event will feature 60 (clearly strong) men and women competing in a variety of contests, including the caber toss, a traditional Scottish athletic event in which competitors toss a large tapered pole called a “caber,” and it will piggyback off Fridays on the Plaza.

The competition will finish up while the concert series opener, Pert Near Sandstone, is beginning its set, so Seckman encourages attendees to continue the fun in downtown Cheyenne and stick around to enjoy the music after the competition is over. (And if you want to hear the winner of the Highlander Strength Competition, they’ll be announced shortly before the opener, Head for the Hills, takes the stage.)

The competition, like the rest of the events related to the festival, is completely free to attend.

The second day of the festival begins at 10 a.m. with a parade from the lake to center field at Dunbar Field in Lions Park, Carey Avenue and Eighth Avenue, followed by a calling of the clans (aka kinship groups). Each clan will announce itself and proceed out to the sound of a live bagpipe performance.

At 10:15 a.m., a new round of Highland Games will commence on the infield, and after the parade and until 4:30 p.m., event-goers can walk around the park to shop from several vendors or hear a live performance by two groups making their Cheyenne Celtic Festival debut: Irish music trio Once Upon a Tune from Fort Collins, Colorado, and Denver’s “Alternative Pipe Band Experience,” the MileHighlanders. Vocalist Kayla Schwab, Redeemed Strings and Emerald Society Pipe will also perform.

Once they’re hungry, guests can chow down on chili cheese burgers, hot dogs and fries from Cruisin Thru food truck, featuring the original menu of the brick-and-mortar restaurant of the same name on the corner of South Greeley Highway and Fifth Street.

In need of a graduation or Father’s Day gift? Especially if the person you’re shopping for is a fan of woodworking, leather, jewelry, soaps or Celtic cultural items, Seckman recommends perusing the several booths included in this year’s festival.

“We do have more vendors than we’ve had in the past, and we’ve got three large vendors we’re really excited about,” he said.

One of those is Fort Collins-based The Cloak Drummer Co., which builds and sells historical items to sell at “Civil War, mountain man, renaissance, pirate, medieval and even steampunk events.” Another is GreenMan Gifts, a traveling shop that sells cultural jewelry, clothing and other items at Celtic, Irish and Scottish festivals across the U.S.

At 4:30 p.m. Saturday, the festival will close with the Highland Games Awards, but guests who are having too much fun to go home can head to the lobby of Red Lion Hotel and Conference Center, 204 W. Fox Farm Road, for a drink and Celtic Jam Session with Once Upon a Tune from 7-9 p.m.

Redeemed Strings kicks off the last day of the festival at 10 a.m. with a live performance, followed by the MileHighlanders in the event’s grassy open area at 10:45 a.m. and a performance by CaraTrom, a Denver-based Irish/bluegrass/Americana vocalist, at 11 a.m.

At 2 p.m. is one of the most special events of the festival, Seckman said, the Kirkin of the Tartans. This religious service in the entertainment tent will be led by Pastor Aaron Kor of Calvary Chapel of Cheyenne.

“Kirkin is a Gaelic word for church, so it’s essentially a church service … and we’ll have Kayla Schwab singing as part of the Kirkin,” he said.

Specifics about vendors, the competition and other festival happenings can be found at www.facebook.com/CelticFestival, and Seckman said he hopes to get as many returning and new guests as possible to experience this culture-filled weekend.

“It’s a cool history that goes way back to how the Scottish and Irish came through the U.S.,” he said of the foundation the event is built upon. “In the Wild West, there are stories of trappers … and Irish and Celtic groups who participated in those and ended up staying. For me, the cool part is getting to spend time with the community and share some Celtic history and how it connects with the U.S. and Cheyenne, specifically.”

Drawings will be around 4 p.m. each day, and winners need not be present at the time of drawing to win. Organizers ask that eventgoers bring cash to enter and to spend at the various vendors because there are very few electrical plugs for sellers to run digital payment mechanisms. There will be ATMs on site.

Cost: Free admission; must pay for food and other items for purchase