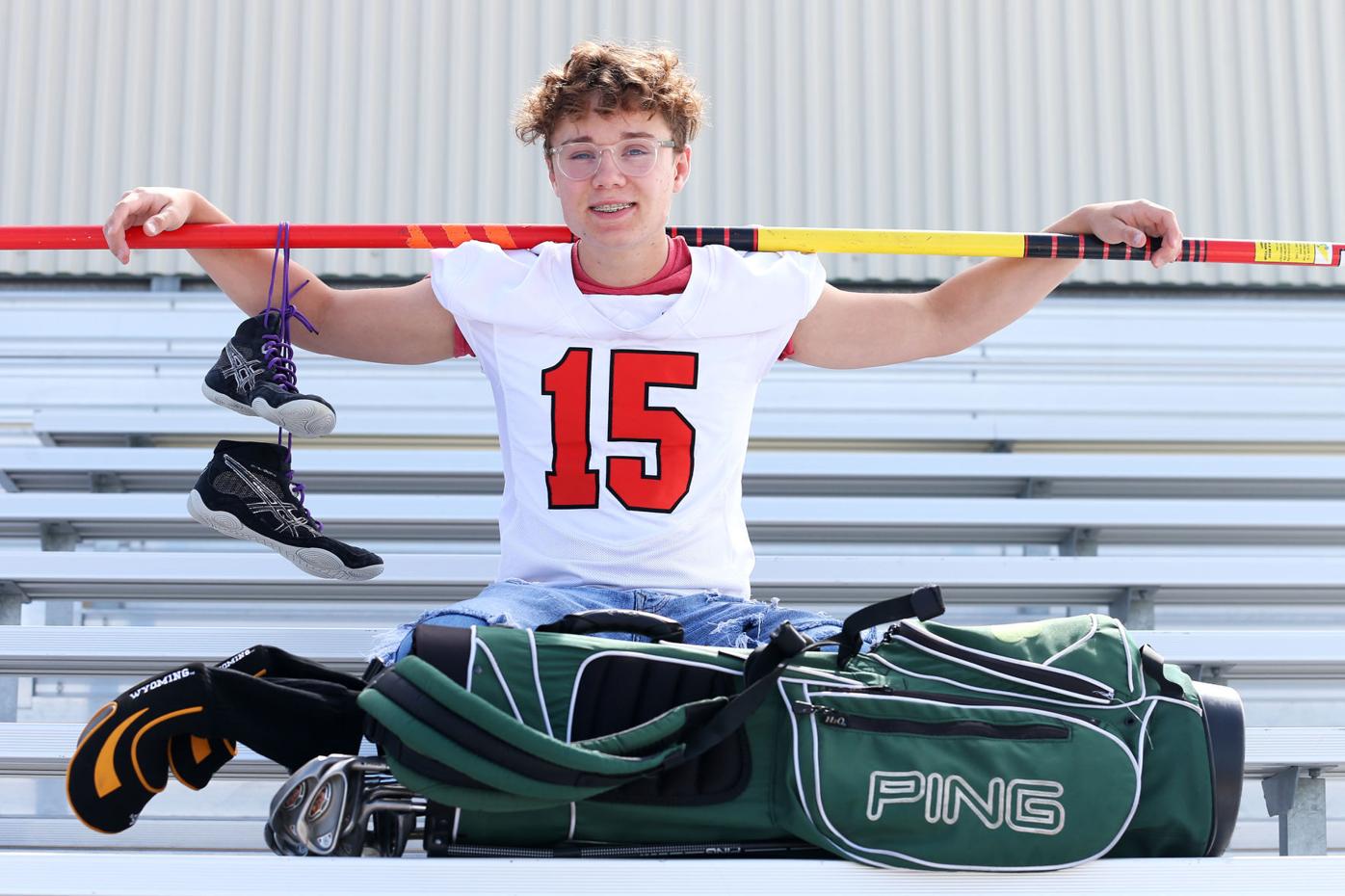 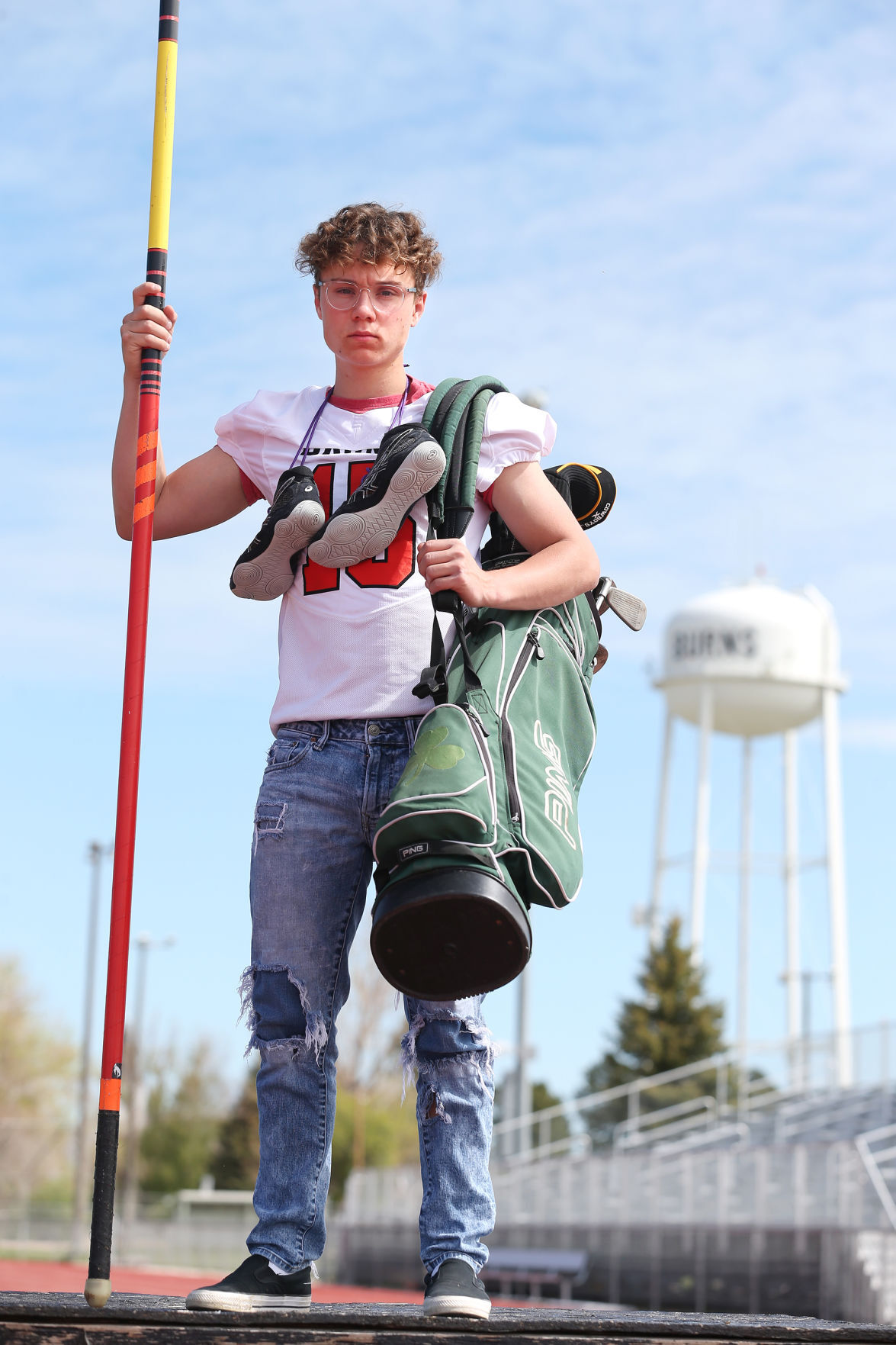 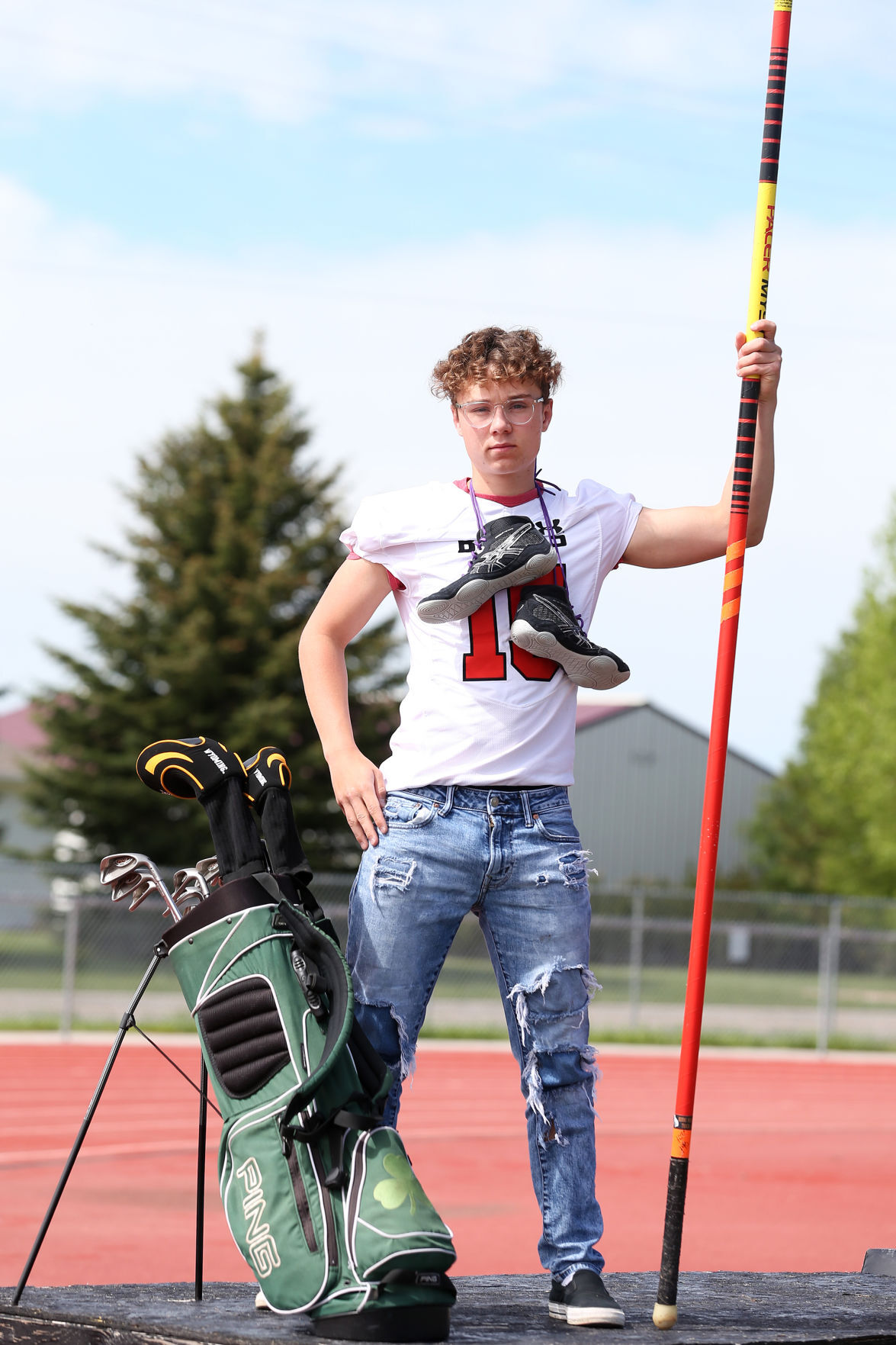 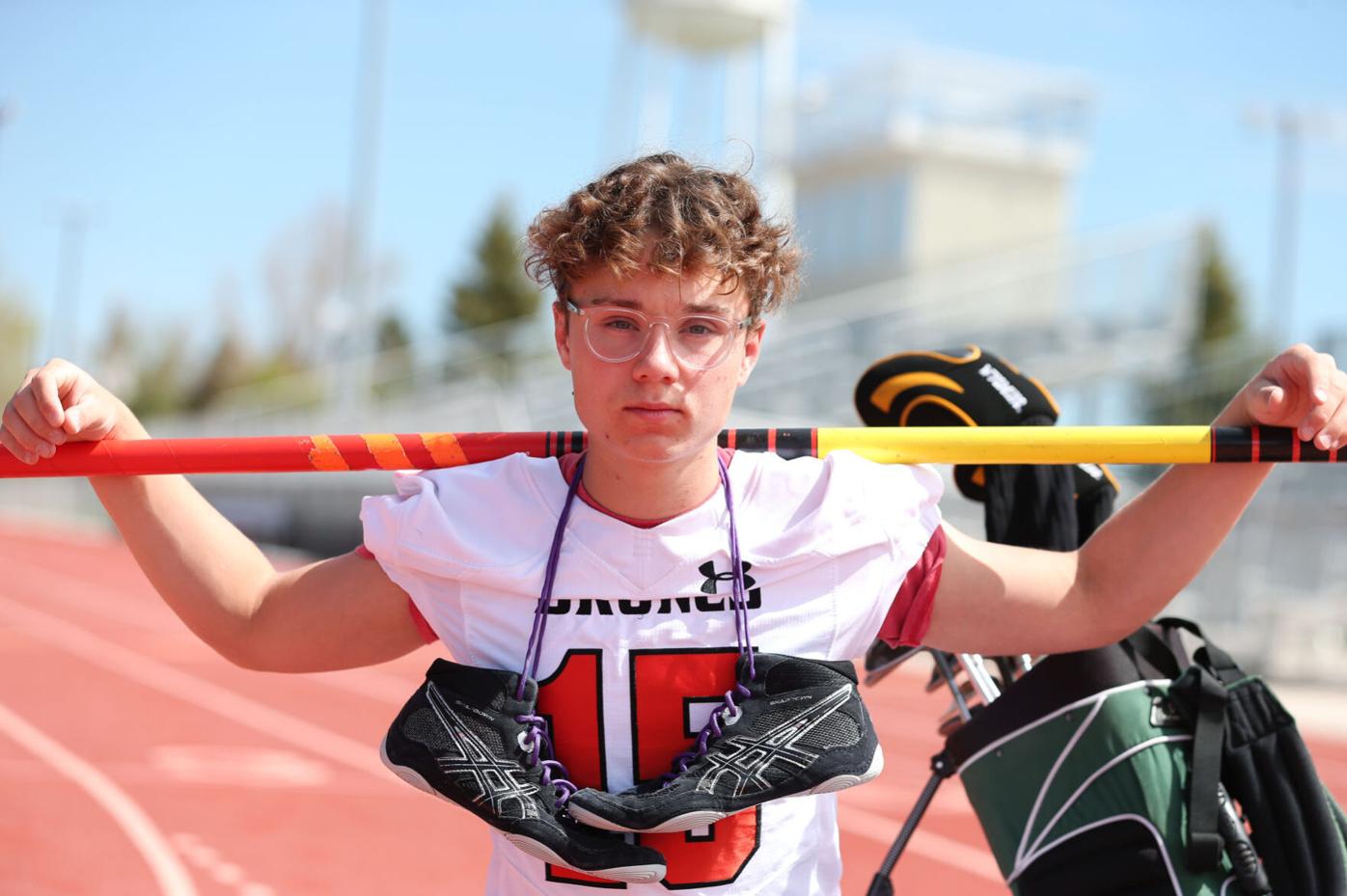 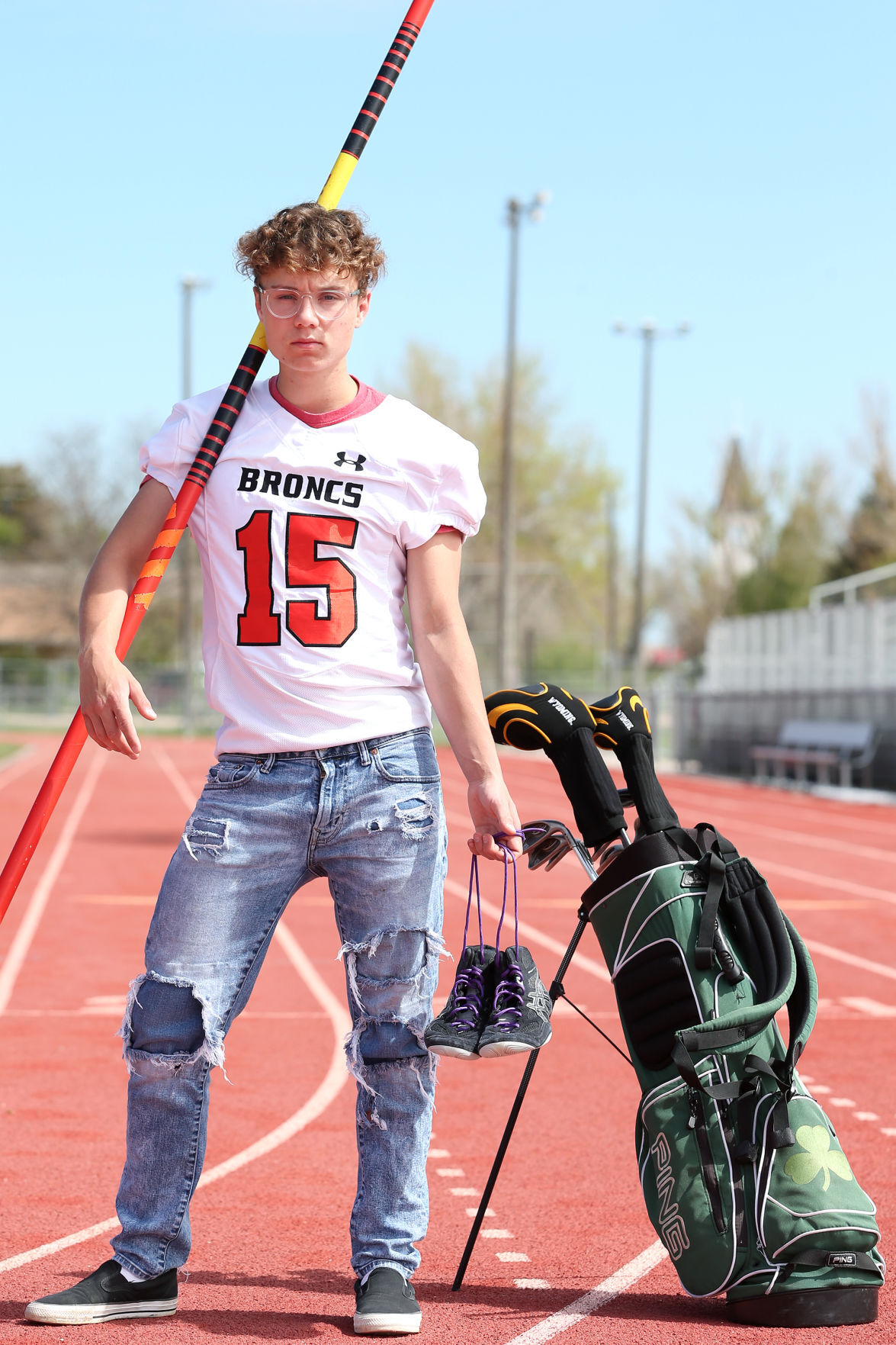 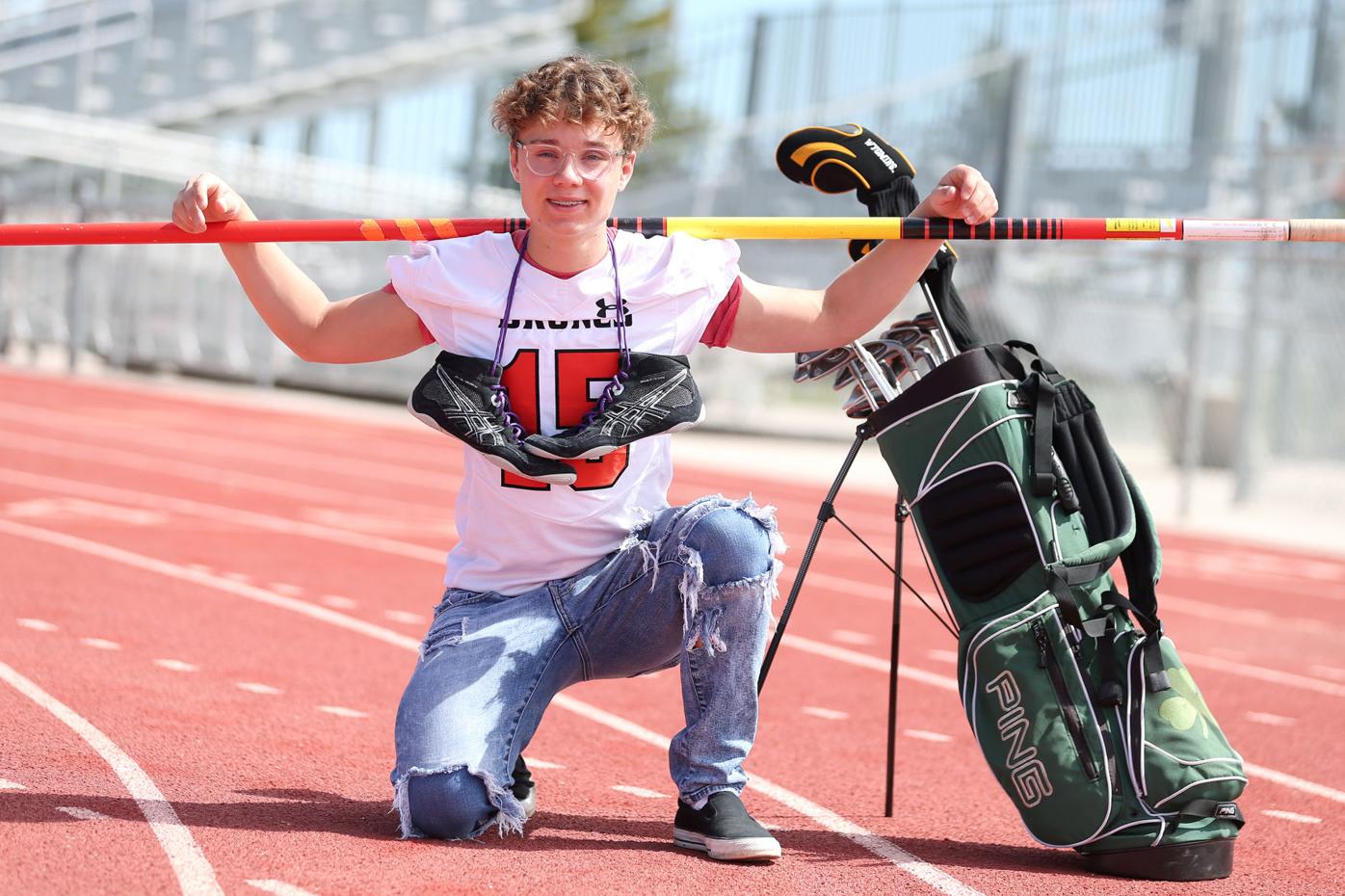 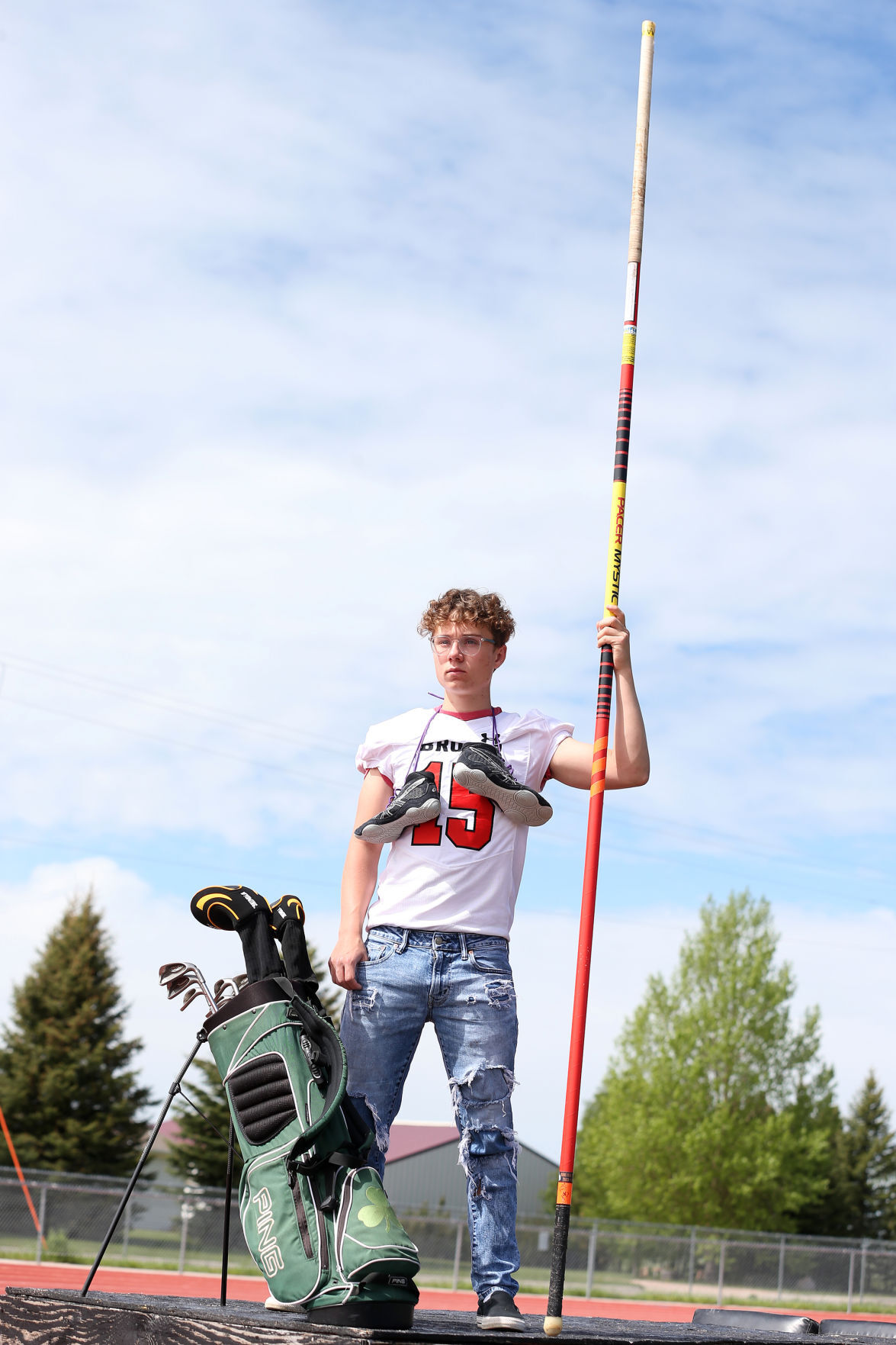 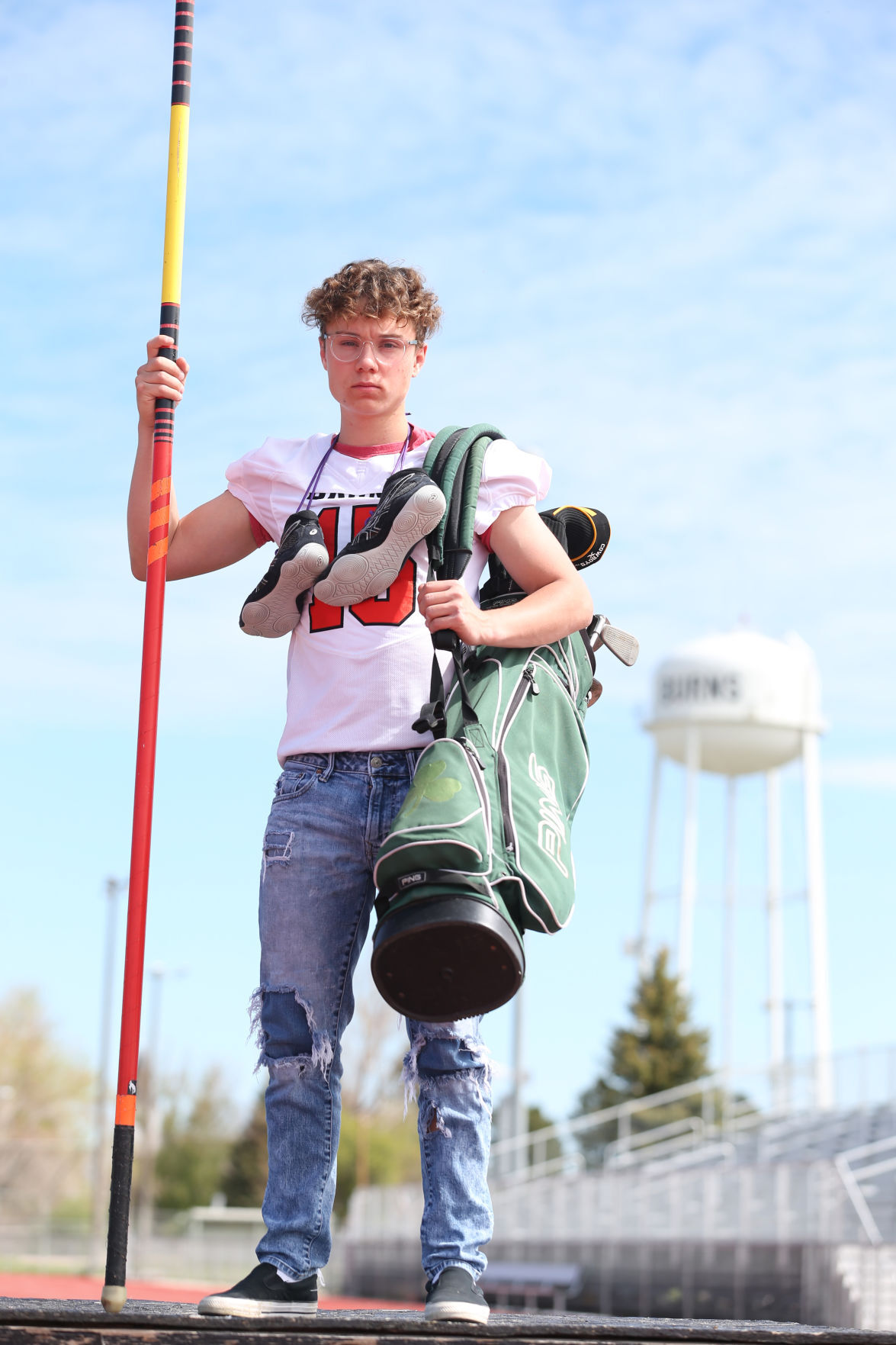 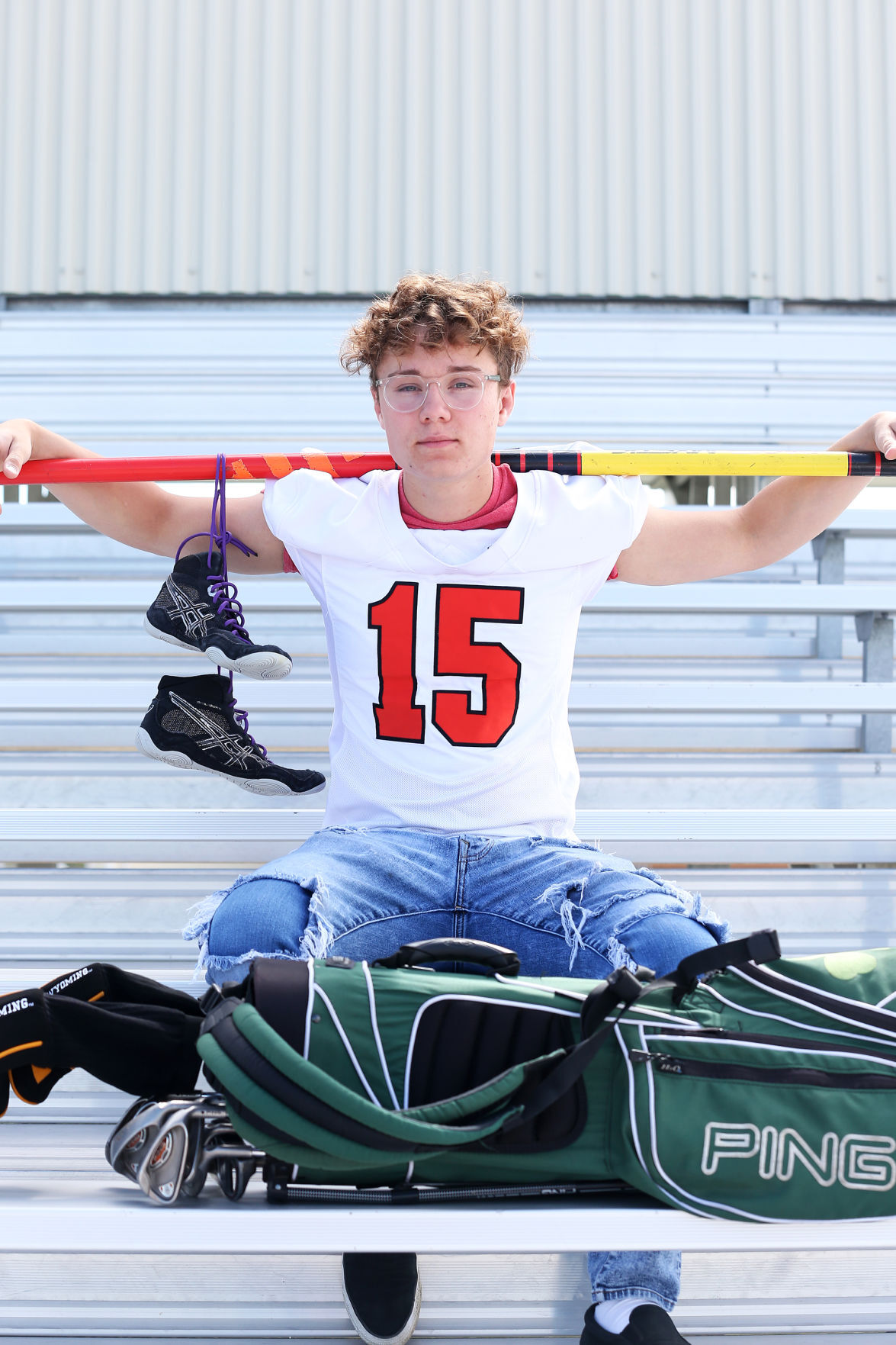 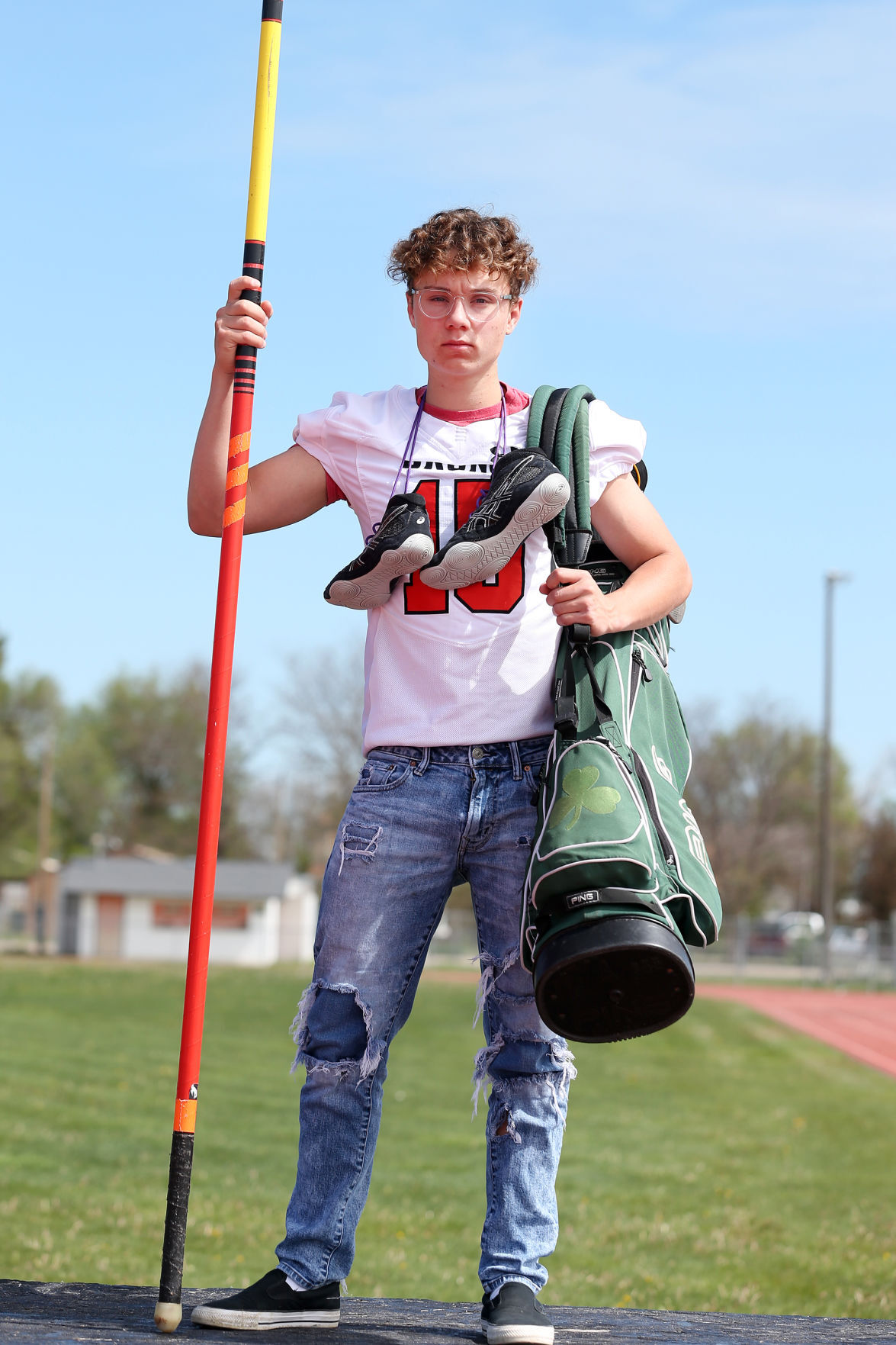 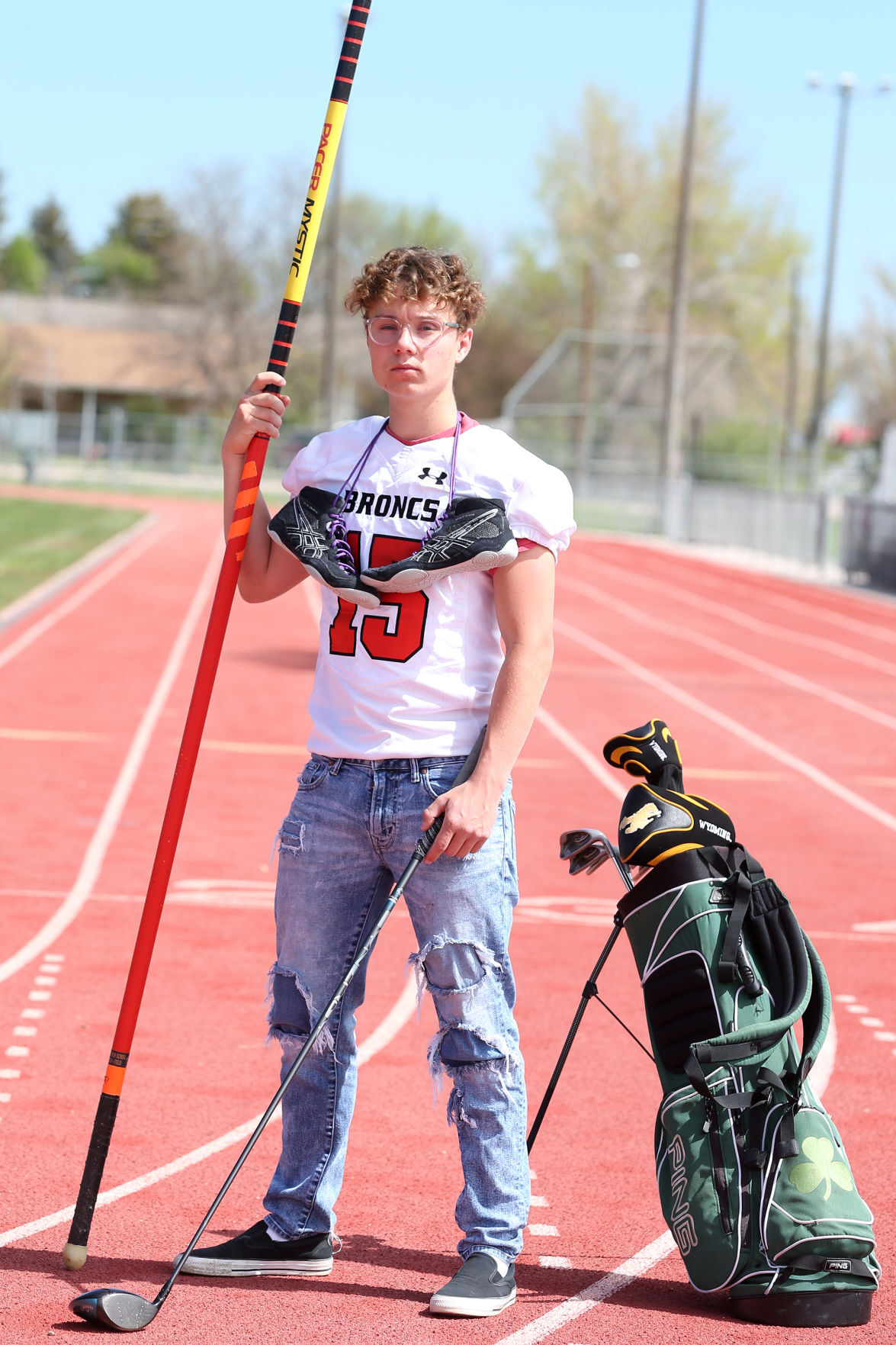 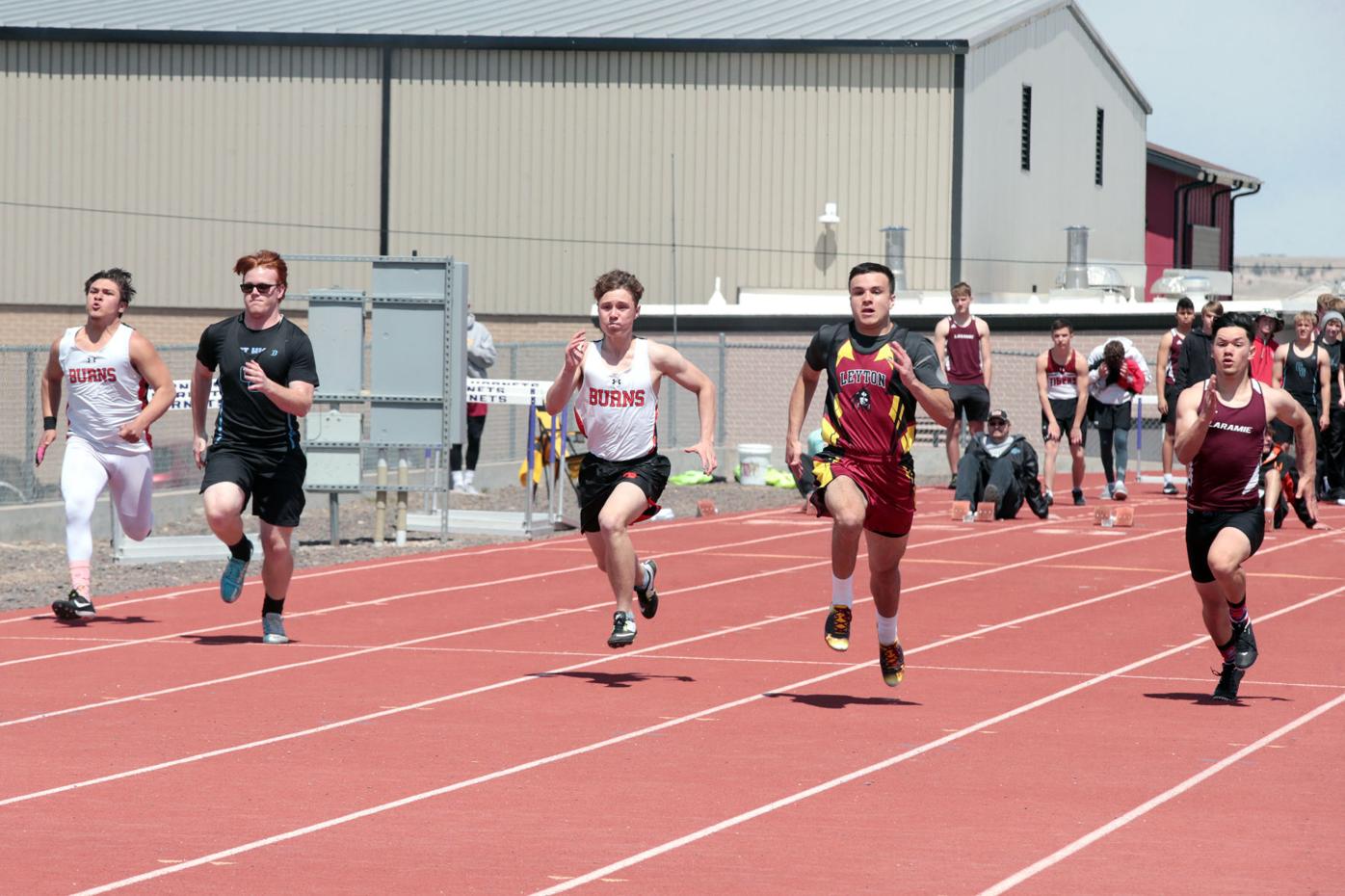 CHEYENNE – A shift in the calendar – and sweet-talking his mother – helped Conor Manlove accomplish something no other Burns High athlete is believed to have done: Earn four varsity athletic letters in a single school year.

The ball was unwittingly set in motion over the summer when Manlove started lifting weights with the Broncs football team. He hadn’t played football during his first two years of high school because he thought he was too small and not strong enough to survive at the high school level.

Burns coach Brad Morrison knew Manlove spent his falls golfing for Cheyenne South, but still joked with him about joining the Broncs on the gridiron.

Manlove put together a pair of sub-100 rounds to take 43rd at a Class 4A state golf tournament that was played two weeks earlier than normal because of fears a COVID-19 outbreak might bring the season to a premature conclusion.

The football season was only a few games old when the golf schedule wrapped up in mid-September, and Manlove realized he had a chance to make history if he could suit up for Burns.

His father, Cole Manlove, was open to the idea of Conor playing football, but wasn’t sure his wife, Leigh Anne Manlove, would sign off on it.

“I decided we should start by asking the coach, and I was counting on (Morrison) saying no,” Cole said with a laugh.

“He really fit in with the football crew when he was lifting with us over the summer,” Morrison said. “He was always fun to have around because he is such a positive kid. I always hoped he would come out for football.”

All Conor had to do after getting Morrison’s OK was convince his mother, Leigh Anne. That wasn’t going to be easy.

Conor’s older brother, Keenan, suffered a diagonal fracture in one of his lower leg bones during his junior season and had to be flown from Thermopolis to Casper by helicopter for treatment. Leigh Anne reluctantly agreed to let Keenan play his senior season.

“At first, she was dead set against it and said there was no chance I was going to play,” Conor said.

Conor eventually wore her down, and started practice Sept. 21. Even though he had been playing golf, the Wyoming High School Activities Association still required him to have nine practices – including five in full pads – before he played his first game.

Conor started the season on the junior-varsity team, and quickly made an impression.

“He had what seemed like seven tackles in a row, and immediately I thought, ‘OK. He has to play varsity right now,’” Morrison said.

Manlove played outside linebacker and defensive end for the Broncs, and recorded eight tackles (two solo), a quarterback sack and a fumble recovery.

“He has a tremendous motor,” Morrison said. “He is tenacious and doesn’t care if he gets hit. He flies around and is a good tackler because of his wrestling experience.

“The reads weren’t always there, but he has such a natural nose for the ball.”

Conor went into the Class 3A state wrestling tournament with a winning record, but he wasn’t expected to earn a medal by placing in the top six. He trailed by a sizable margin in his opening bout, but turned the tables on Powell junior Mikey Timmons and scored a third-period pin in 4 minutes, 36 seconds.

“We talked to our wrestlers all season long about wrestling the entire match, and that’s what he did, even though he was behind by quite a bit,” Clayson said. “It seemed to click that he could win if he wrestled hard like that the entire match.

“He had been making strides all year, but that tournament was a big weekend for him.”

Conor dropped his quarterfinal bout to eventual state runner-up Tanner Collins of Mountain View. He pinned his first opponent in the wrestleback rounds, but was pinned by the second. Conor fell in the fifth-place bout and finished sixth in the 138-pound weight class.

“Out of all my experiences playing a varsity sport, that was the most fun thing I participated in this year,” Conor said. “Wrestling is probably my favorite sport because of the fact it’s so challenging. There’s a common saying among wrestlers that you have to love to hate the sport.

“You have to love feeling crappy all year because you’re conditioning all the time, you’re cutting weight and you’re getting your butt kicked in practice every day.”

Conor played golf during the spring of his freshman year, but badly missed track and field. He decided to run track for Burns during his sophomore campaign, but that season was scrapped altogether because of COVID-19.

This spring, Conor competed at the Class 3A state meet in pole vault, the 4x100-meter relay and the 1,600-meter sprint medley relay. The Broncs reached the podium by finishing seventh in the 4x100. This year’s sprint medley quartet set a school record this season.

Three-sport letter winners are commonplace in Wyoming, even in the state’s largest schools. Many other states allow dual participation, but the WHSAA does not. For that reason, Conor making history in Burns in elite company.

He says his older brother, Keenan, deserves credit for inspiring him to even attempt the feat.

“Doing something like that is all about hard work, and I learned that from my brother,” Conor said. “He has worked hard in school, sports and outside of school his whole life. He worked hard to get to the Naval Academy, and I’m really proud to say he’s my brother.

“He taught me a lot about what it takes to succeed. He taught me that you have to stay dedicated, even if it’s not enjoyable sometimes.”