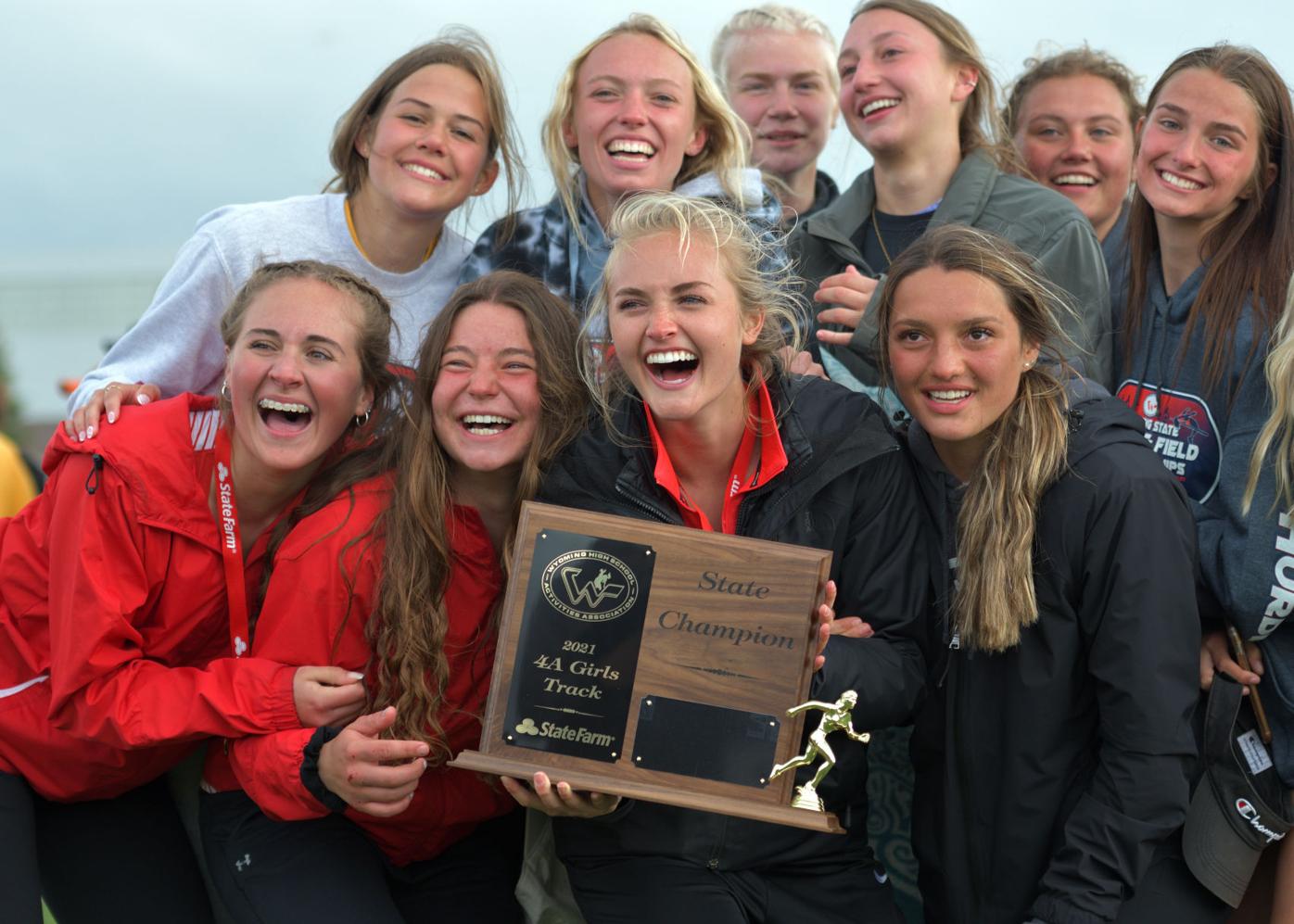 Some of the members of Cheyenne Central girls track and field team pose for family and friends with the Class 4A state championship trophy. The team scored 85.5 points to win the three-day event. 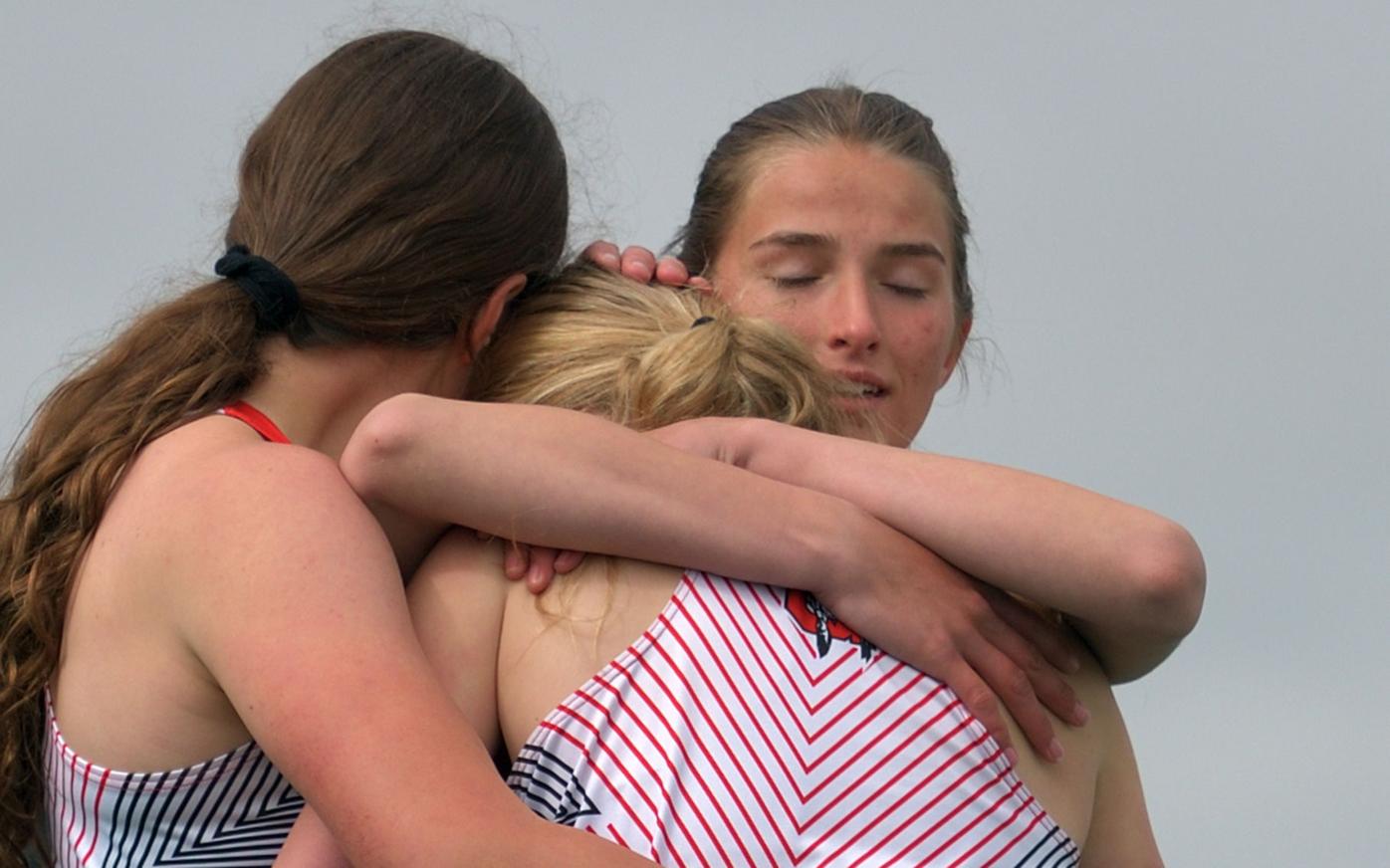 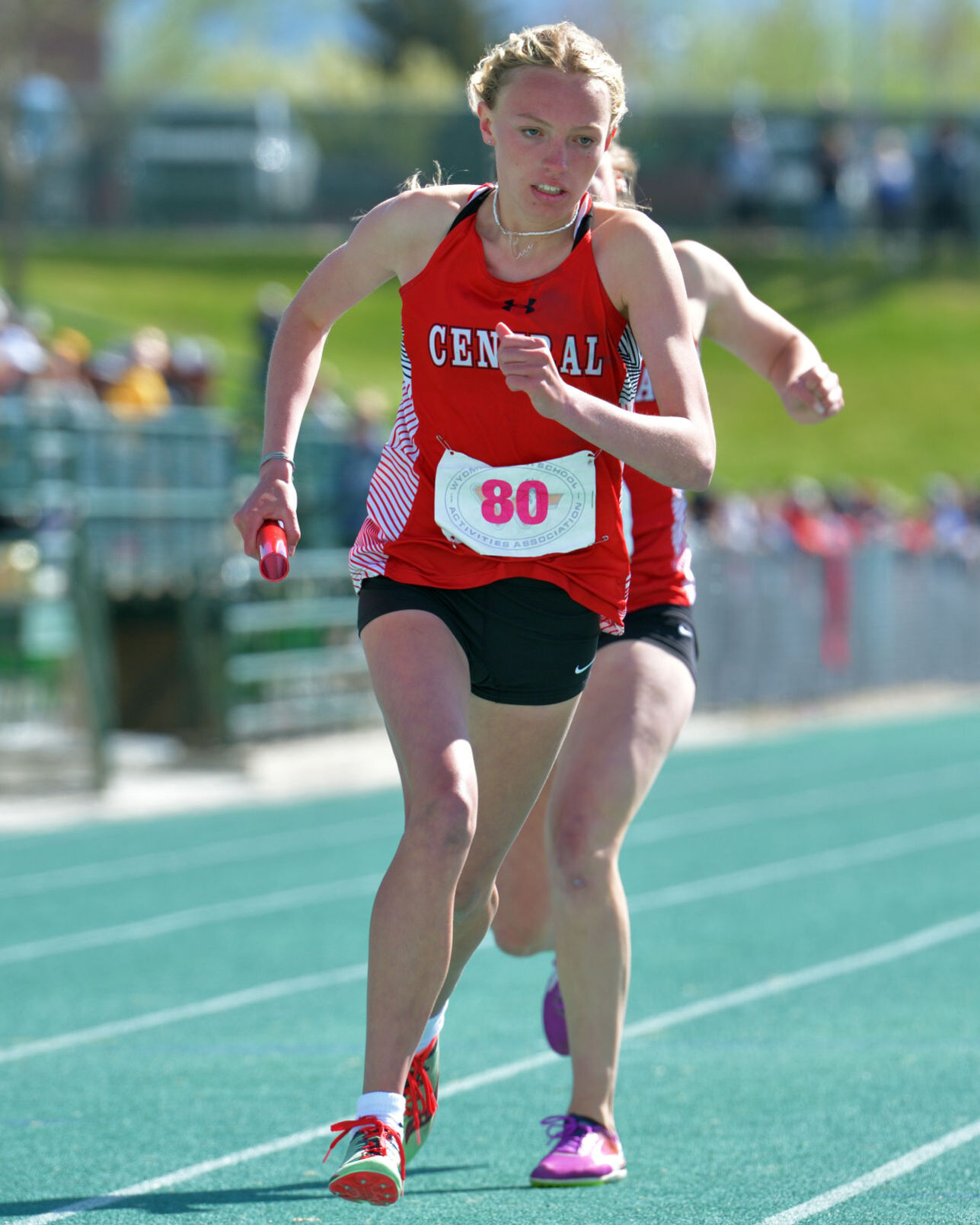 Cheyenne Central sophomore Madisyn Baillie starts her leg of the 4x400-meter relay at the Wyoming Class 4A state track and field meet Saturday at Harry Geldien Stadium in Casper. Baillie and teammates Emily Taper, Lexi Puev, and Elizabeth Prescott finished the event in 4 minutes 13.96 seconds to place sixth in the event and add three points to the team total.

Some of the members of Cheyenne Central girls track and field team pose for family and friends with the Class 4A state championship trophy. The team scored 85.5 points to win the three-day event.

Cheyenne Central sophomore Madisyn Baillie starts her leg of the 4x400-meter relay at the Wyoming Class 4A state track and field meet Saturday at Harry Geldien Stadium in Casper. Baillie and teammates Emily Taper, Lexi Puev, and Elizabeth Prescott finished the event in 4 minutes 13.96 seconds to place sixth in the event and add three points to the team total.

CHEYENNE – Sean Wilde was trying to give a compliment while measuring expectations when he described his Cheyenne Central girls track and field team as “pretty decent” during a team meeting.

The athletes understood the intent, but it didn’t stop them from joking with their coach about the perceived slight and using it as a rallying cry.

“I told them, ‘You’re a pretty decent team and you have a shot to win state, but you can’t lose focus,’” Wilde said. “They latched onto that and the next thing I know, they’re breaking the huddle with ‘Pretty decent team on three!’”

The Lady Indians ended up being more than pretty decent. In fact, this group might go down in history.

Central won its third consecutive Class 4A state championship without a single athlete or relay team winning or even finishing as runner-up. The Indians finished with 85.5 team points, while state runner-up Campbell County had 82 points, and third-place Kelly Walsh finished with 80.

“When coach talks to us, he tries to keep our expectations realistic,” junior Katie Thomson said. “He told us we were a pretty decent team with a chance to win state, but it was going to be hard. We’re like, ‘Thanks, coach. It’s great to know you think we’re pretty decent.’

“That became our thing this season.”

“It made us want to go out and compete even harder,” she said. “It became something we joked about, but it was still something we thought about and something that motivated us. (Wilde) never talks about winning state to try to get us all hyped up. He is good about being honest with us and not overdoing it.”

“We have so much depth,” senior pole vaulter Kalea Reisdorfer said. “It was pretty crazy that none of us got the 10 points that come with first place, or the eight points for second place. We had girls spread out who placed in a lot of events and that helped us.”

Thomson added 17 points through three top-4 finishes individually. She was third in the 100-meter hurdles, which is an event where sophomore Madisyn Baillie placed eighth after falling. Baillie entered the finals with the fastest preliminary time. Thomson’s third-place effort, and freshman Emma Hess’ sixth-place effort added nine points to the team total. Baillie chipped in with one by virtue of finishing eighth.

Sophomore Sydney Morrell chipped in with 15 points by placing third in the 800-meter run (six points), fourth in the 400-meter dash (five points) and fifth in the 3,200 (four points).

Those finishes were expected based on seedings and season results. The Indians also got unexpected contributions.

“If you look at the seeding entering the meet, (senior) Dakota Lobmeyer wasn’t supposed to get us any points,” Wilde said. “But she had a personal best by about 10 inches in shot put and got us three points (by placing sixth). That’s a big pick up in an event we weren’t expected to get any points in.”

Wilde points to Central’s coaching staff as a secret to his team’s sustained success. That group features Wyoming Coaches Association Hall of Famers Brick Cegelski and Brad Pickett as full-time assistants, WCA Hall of Famer Craig Prine as a volunteer assistant, and Bruce Mowry as the Indians boys head coach and the programs throws coach.

“I’m sure Bruce is going to be in the hall of fame soon, so we’ve got a coaching staff I think is the best in the state,” he said.

“The coaches do a great job of motivating you and bringing the best out of you,” said Prescott, who placed fourth in the 400. “They don’t worry about what event kids are competing in. They just want what’s best for the team and what’s going to score the most points for the team.”

“There are some kids who will just give up if they’re not the best in their event, but our coaches keep us pushing,” she said. “We learn that we can still do well in our events even if we’re not the best. That gives us depth as a team.

“We only won state by three points, so everybody fighting to finish one or two places higher than they were expected to was really important.”

n Kaitlyn Ackerman, Brogan Allen and Lauren Lucas, softball, Cheyenne Central: Ackerman, a junior, was 7 for 19 with two doubles, a home run and 10 RBIs to help the Lady Indians finish as runners-up at the inaugural Wyoming state tournament.

Allen, also a junior, went 11 for 18 with four doubles, two home runs and nine RBIs. She also struck out 11 hitters through 10-2/3 innings in the pitcher’s circle.

Lucas, also a junior, was 11 for 18 with four doubles, a triple and nine RBIs.

n Cheyenne South girls 4x400-meter relay: The quartet of juniors Darby Downham, Kaycia Groth and seniors Caydince Groth and Paige Guille won the Class 4A state meet in a time of 4 minutes, 8.44 seconds. They won the 4x400 at all seven meets they competed at this spring.

Galicia, a senior, had two doubles, and drove in five runs. She struck out 29 hitters across 14-1/3 innings in the pitcher’s circle.

Stehwien, a sophomore, was 9 for 14 at the plate with four doubles, a triple and two RBIs.

Kershaw, a junior, stopped 21 shots at the state tournament. That included 18 during a 2-0 loss to Rock Springs in the opening round. She didn’t face a single shot in the fifth-place match.

n Kaliff Guevara, boys track and field, East: The senior won triple jump and placed third in long jump at the Class 4A state meet. His triple jump mark of 48 feet, 7 inches set a new East record, and was 2.5 inches away from matching the state record. Guevara posted a mark of 21-7.5 in long jump.

n Cody Hape and Wade Pollock, boys track and field, Burns: Hape, a sophomore, won the 400-meter dash at the Class 3A state meet with a time of 51.30 seconds. He also took eighth in high jump (5 feet, 8 inches).

Pollock, a senior, placed second in shot put with a school record heave of 54 feet, 2 inches. He also took fourth in discus (142-4).