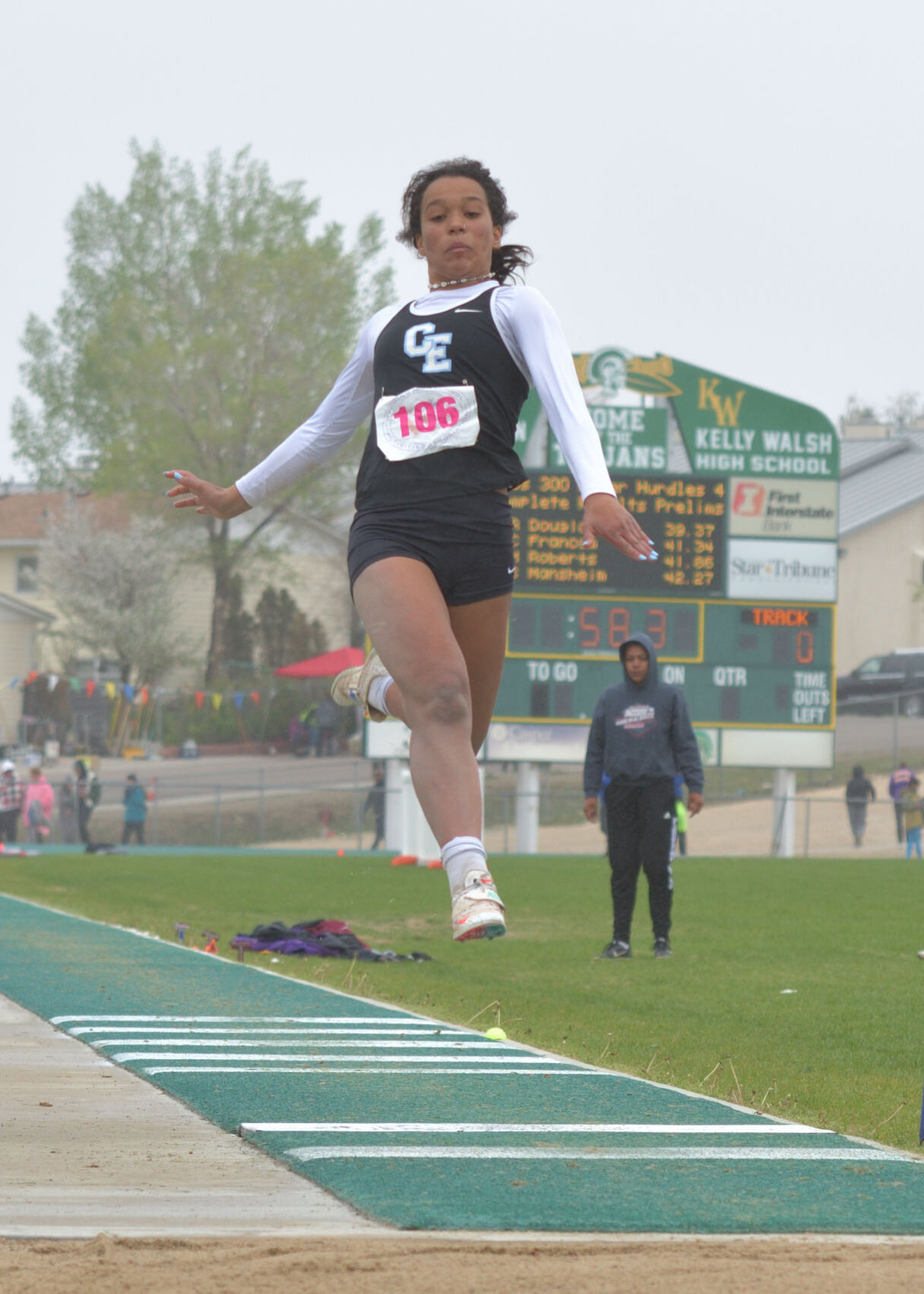 Cheyenne East freshman Taliah Morris competes in the long jump at the Wyoming Class 4A state track meet Friday in Casper. Morris won the event with a jump of 19 feet, 1 inch. Kirk Miller for WyoSports 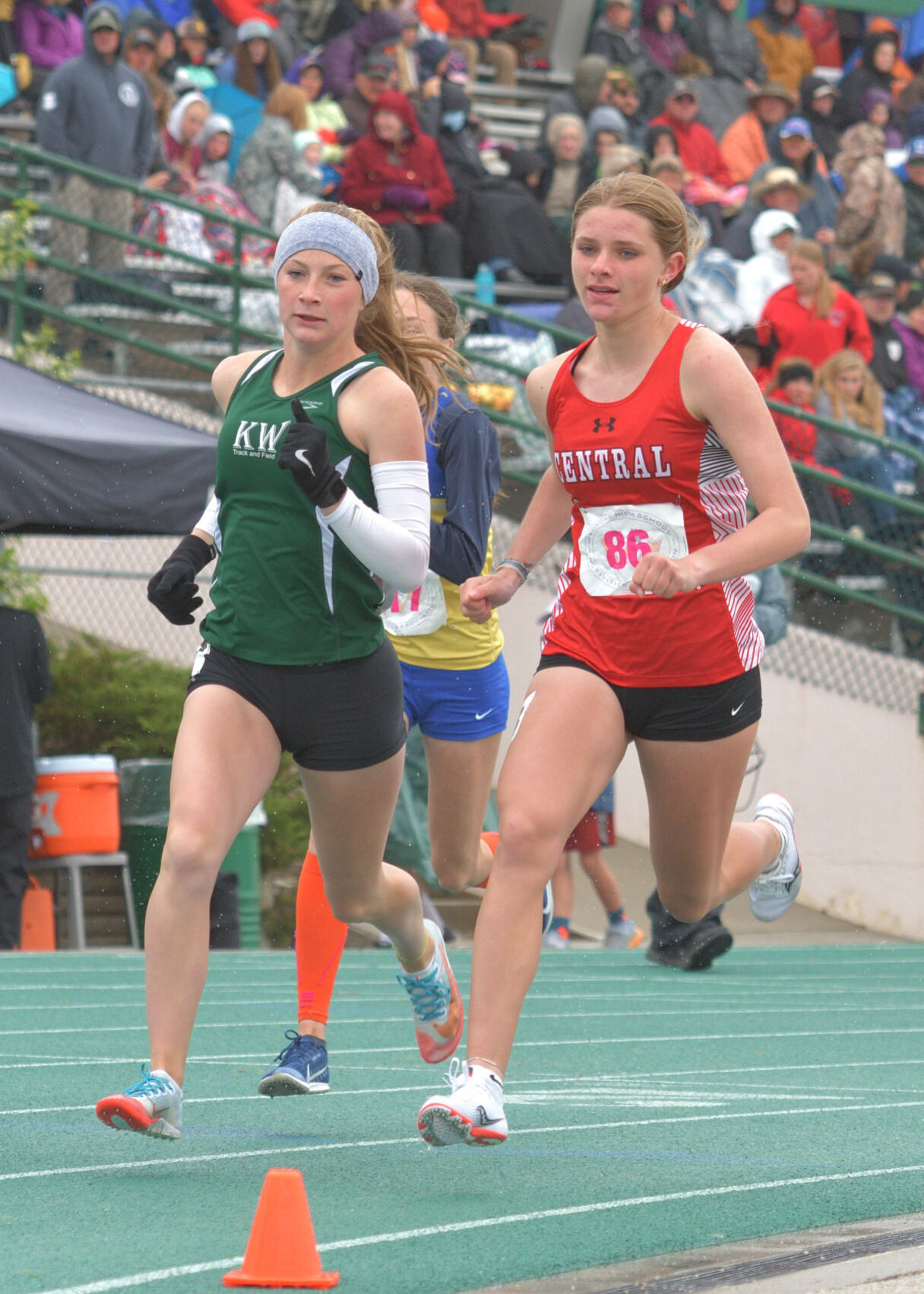 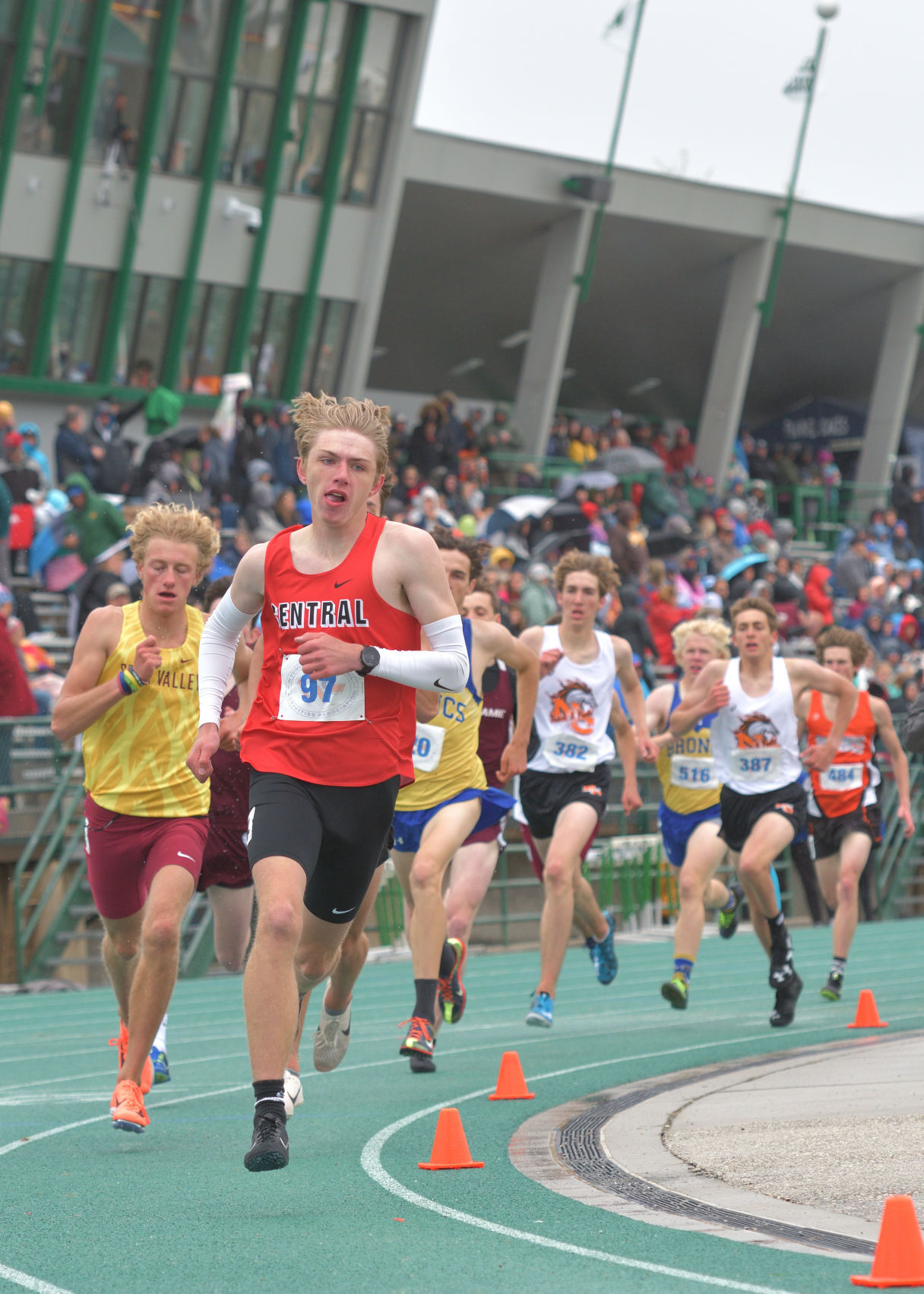 Cheyenne Central High School junior TristanKnueppel leads the field midway through the class 4A 800 meter run at the WHSAA State track and field championships in Casper on Friday. Knueppel placed third in the event with a time of 2 minutes 0.98 seconds. Kirk Miller/For WyoSports

Cheyenne East freshman Taliah Morris competes in the long jump at the Wyoming Class 4A state track meet Friday in Casper. Morris won the event with a jump of 19 feet, 1 inch. Kirk Miller for WyoSports

Cheyenne Central High School junior TristanKnueppel leads the field midway through the class 4A 800 meter run at the WHSAA State track and field championships in Casper on Friday. Knueppel placed third in the event with a time of 2 minutes 0.98 seconds. Kirk Miller/For WyoSports

CASPER – Despite the fact she likely already had victory in the bag, Cheyenne East freshman Taliah Morris refused to rest on her laurels.

Morris entered the WHSAA state track meet with a longest jump of 19 feet, 7 inches, more than two feet better than her closest competitor in 4A and a number that would have been a class record had it occurred at the state meet.

She jumped 19 feet during the preliminaries of the 4A competition Friday morning and had more than a foot on her nearest competitor. She could have opted to settle on that mark, knowing full well no one was going to catch her.

But that just isn’t Morris.

She walked up to her coach, told him, “I want to get 20,” and was back to prepping for her next jump.

Morris didn’t end up reaching that vaunted 20-foot mark, but she did get a pretty solid “consolation” prize: a state championship, with the promise of three more years to reach that personal goal.

Morris notched a 19-foot-1 jump on her final attempt of the day and cruised to the top spot on the podium on a cloudy, rain-filled day at Kelly Walsh’s Harry Geldien Stadium. The second-place finisher, junior Nyomi Moore of Kelly Walsh, jumped 18 feet. Cheyenne Central junior Katie Thomson finished in fourth with a jump of 17-3.

“It hurts not to jump 20, because when I hit 19, I was like, ‘I have to push and jump that 20.’ And I just wanted it,” Morris said. “(But the win) gives me a lot of confidence going into my sophomore, junior and senior years, because I’m right there with everyone else. And I’m just so excited to compete next year.”

Morris, who just turned 15, has had a banner first season for the Thunderbirds. The state record for the classification and all classes (19-9) isn’t that far out of reach.

Morris isn’t content with where she’s at, though; there is plenty more in her sights. Immediately following Friday’s event, Morris spoke of a need to finish jumps better.

She’s making sure to soak it all in, however, even if just for the briefest of moments.

“There’s times where I just have to slow down, and I have to realize that I’m only 15, and a lot of these girls are way older than I am, and I’m still competing with them,” said Morris, who also qualified for Saturday’s 100- and 200-meter dash finals. “It just gives me a lot of excitement, though, and it makes me really happy.”

Among the other local champions Friday was the Pine Bluffs 4x100-meter relay team, which emerged victorious in an exciting 2A race.

Pine Bluffs entered the day with the fastest time in the classification, a mark of 53.37 seconds. Senior Ashley Fabela said she was aware her team had a target on its back; it was up to them to make sure they came through when it mattered most and didn’t give in to sluggishness as the prohibitive favorites.

They wound up running a season-best 53.31. Every second was needed, as the top-three finishers all finished within less than half a second of each other.

“It feels amazing. Like, everything you could ever wish for.”

The Cheyenne East boys finished in fourth in the 4A 4x100 race, Burns took seventh in the 3A race, and the Pine Bluffs boys took fifth in the 2A race.

Morris’ Cheyenne East teammate, senior Kaliff Guevara, had a banner day in the long jump, as well, taking third in the 4A boys meet with a personal-best jump of 21 feet, 7.5 inches.

In the boys 4A 800-meter race, Cheyenne Central junior Tristan Knueppel finished in third place with a time of 2:00.98. Knueppel led after the first lap, but was eventually passed by Star Valley senior Pete Visser and Sheridan junior Reese Charest.

“At regionals, I got stuck behind everyone. Here, I wanted to get out in front of everyone. So I went out hard the first lap,” Knueppel said. “I knew, no matter what place I got, as long as I got out hard, I was going to be happy with the way the race went.”

In the 4A girls 800, Cheyenne Central sophomore Sydney Morrell took third with a 2:19.21. Burns’ Emma Gonzalez, who took second in the 3,200 race on Thursday, finished 11th in the 3A girls 800-meter run. Pine Bluffs junior Alexis Depaulitte took fifth in the 2A race.

Pine Bluffs junior Carson Rabou took sixth in the 2A pole vault with a jump of 9-foot-6.

Cheyenne Central had a trio of podium finishers in the 4A pole vault, as sophomore Brinkley Lewis, senior Kalea Reisdorfer and junior Kaylee Bell took third, tied for fourth and sixth, respectively. Cheyenne East freshman Drew Jackson tied for fifth in the 4A boys high jump, notching a mark of 5-10.

The afternoon ended with the 4x800-meter relay, where Cheyenne Central took third in both the girls and boys 4A races. Cheyenne East took fourth and sixth in the boys races, respectively.

“We worked hard throughout this whole season. We worked on our baton handoffs a lot, we knew we were ready,” Cheyenne Central junior Jacob Frentheway said. “When it came to it, we just had to do it. And it was crazy, and it was fun.”

The 3A girls pole vaulting final was delayed until Saturday morning due to inclement weather.

Heading into the final day of competition, the Cheyenne Central girls sit in first place in the team standings with 51.5 points, just ahead of Sheridan. The Cheyenne East girls are in ninth.

On the boys side, Cheyenne East is fifth overall, while Cheyenne Central sits in 10th.

In 3A, the Burns boys and girls sit in 10th and 12th, respectively. The Pine Bluffs girls are in second place in the 2A team standings, and the boys team is tied for eighth.