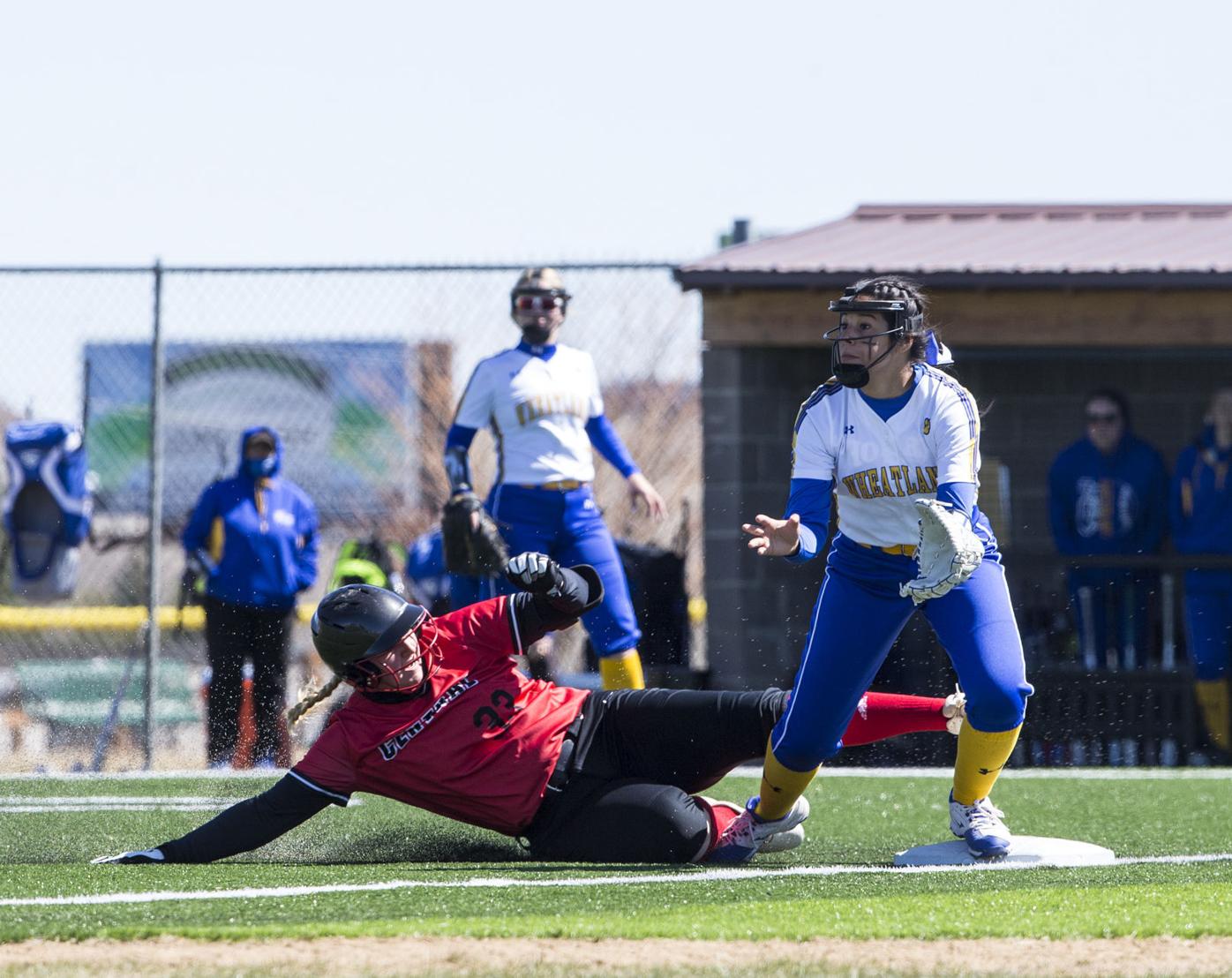 Cheyenne Central’s Brogan Allen (33) slides into third base as Wheatland’s Celi Rivero (7) attempts to catch the ball for the out on Saturday, April 10, 2021 at the Junior League Complex. Central defeated Wheatland 18-3. Rhianna Gelhart/For the Wyoming Tribune Eagle 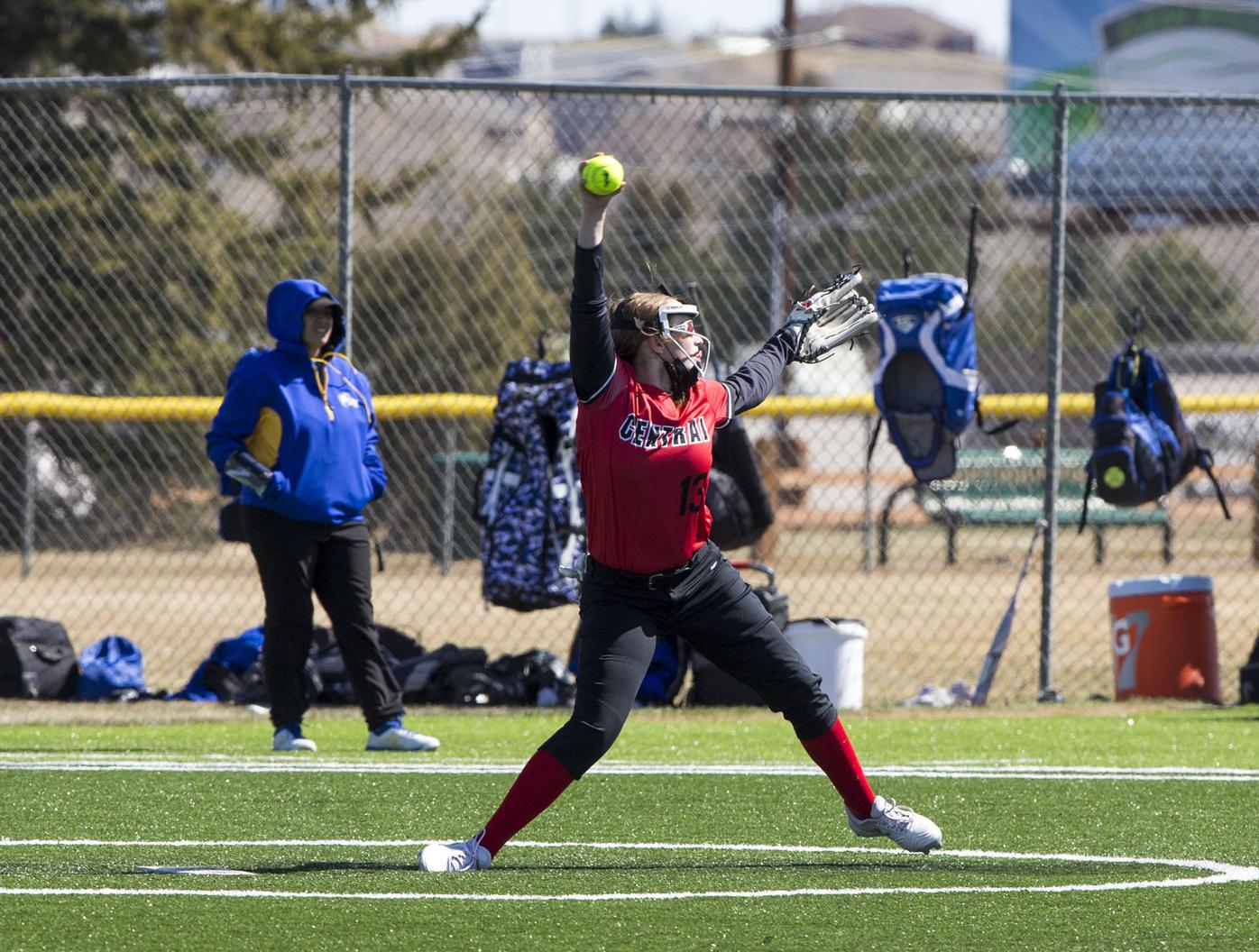 Cheyenne Central’s Brogan Allen (33) slides into third base as Wheatland’s Celi Rivero (7) attempts to catch the ball for the out on Saturday, April 10, 2021 at the Junior League Complex. Central defeated Wheatland 18-3. Rhianna Gelhart/For the Wyoming Tribune Eagle

CHEYENNE – Taylor Gebhart was looking for a measure of redemption when she stepped into the pitcher’s circle Saturday morning.

The junior right-hander had struggled during a relief appearance in Thursday’s loss to Cheyenne East and was looking for a bounce back performance against visiting Wheatland.

She got it, fanning seven hitters during the Lady Indians 18-3 victory at the Cheyenne Junior League Complex.

“I was trying to keep a good mentality, get balls across the plate and just throw strikes,” Gebhart said. “I wanted to keep it simple. I struggled Thursday when we played East. I knew I needed to come back from that and stay positive.

“My rise ball really came along during the winter and the offseason. I was able to throw it in just about any count.”

Central also got three strikeouts from reliever Katie Hinz. Hinz left the game because of an injury with one out in the fifth. Gebhart re-entered and put the Bulldogs away by snaring a line drive off the bat of Gracen Mount and striking out Hunter Sisson looking to end the game early because of the 10-run mercy rule.

“(Gebhart) was throwing really well, and that rise ball was really on point,” Central coach Carrie Barker said. “That’s a great pitch that will make a lot of hitters chase. She was really good about hitting her spots and keeping Wheatland off balance.”

The Indians’ hitters had little trouble putting bat to ball. They pounded out 19 hits, including six for extra bases. Eight of those knocks came during a nine-run first inning.

“I was happy we came out ready to hit the ball,” Barker said. “We talked about bouncing back and building our confidence back up. We swung the bat well and didn’t look at many pitches.”

Gebhart helped herself by going 2 for 3 with a pair of doubles and an RBI. Infielder Cameron Moyte was 3 for 4 with a double. Kaitlyn Ackerman finished the game 3 for 3 with a double, while Jayden Gashler’s lone hit of the morning was a double.

Lauren Lucas and Drue Mirich both had a pair of base hits. Ashley Bunch added a triple to right-center field during the second inning.

“Wheatland had a different type of pitcher than we have seen before this season, and we did a good job of adjusting to whatever she threw at us,” said Moyte, who drove in a pair of runs.