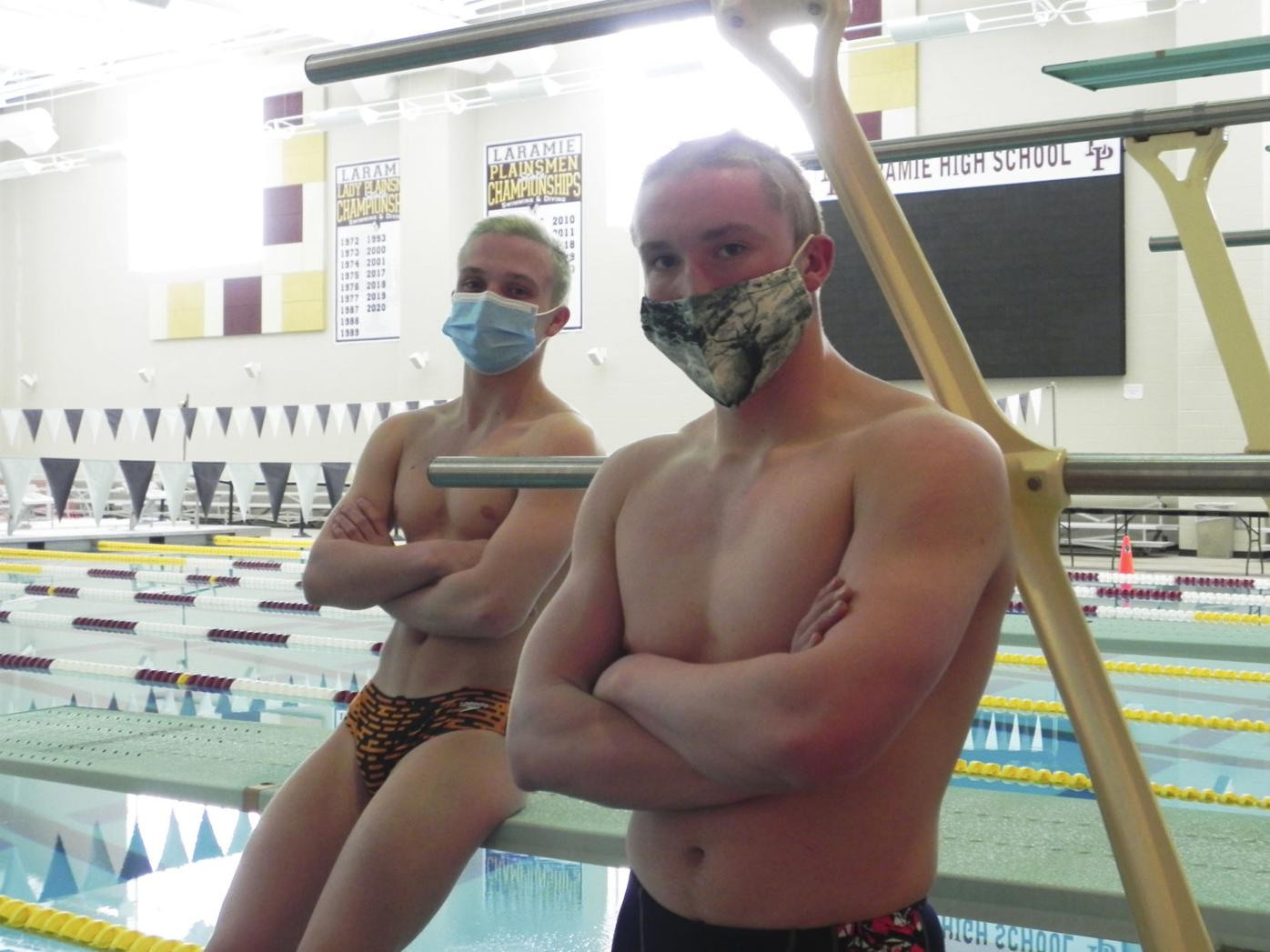 From left, Laramie High juniors Dylan Bressler, a diver, and Mace Spike-Miller, a swimmer, look to lead the Plainsmen to a fourth straight state championship. 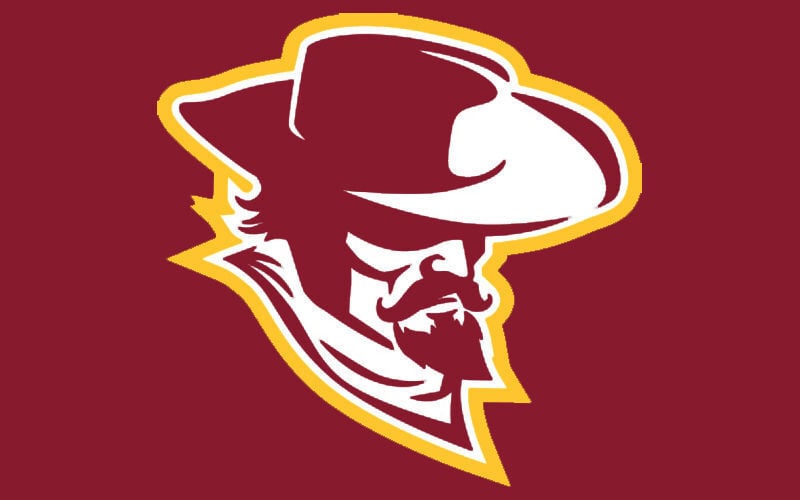 From left, Laramie High juniors Dylan Bressler, a diver, and Mace Spike-Miller, a swimmer, look to lead the Plainsmen to a fourth straight state championship.

Those are the traits Laramie High juniors Mace Spiker-Miller, a swimmer, and Dylan Bressler, a diver, were thinking about leading up to the most important meet of the season.

“Perfect in everything — every turn perfect and every stroke perfect in practice,” Spiker-Miller said. “Then when the state meet begins, I won’t have to think about those and I can just focus on the discipline aspects.”

Bressler added, “Strong, confident, and I put everything into what I’m doing and I don’t quit.”

The Laramie High School Natatorium will host the Wyoming Class 4A Swimming and Diving Championships.

The 4A meet will begin at 2 p.m. today with five rounds of diving for the preliminaries and three more for the semifinals. The swimming preliminaries will begin 30 minutes after the completion of diving. The finals for swimming and diving are set for 9 a.m. Friday. The 3A meet will start at 4 p.m. Friday with the finals at 10 a.m. Saturday.

Laramie’s Tom Hudson, who has coached the LHS boys for 31 seasons, was quick to mention Spiker-Miller and Bressler as unquestioned leaders when the Plainsmen seek a fourth straight state championship.

“Mace has worked so hard and has become a true leader of this team,” Hudson said. “We left a big void from last year in Max DeYoung (a four-year standout now swimming for the University of Wyoming). Mace has stepped into that leadership role as the guy who works the hardest in the pool and who everybody looks to for leadership.

“Dylan is so competitive and worked so hard to refine his diving. At the conference meet, I was truly impressed with how clean and consistent he was. That comes from a lot of hard work dedicating himself to diving and his work is really starting to show.”

The need for speed

Spiker-Miller grew up with soccer as his main sport. When his parents offered a suggestion to add another sport, he chose swimming in the eighth grade at Laramie Middle School.

“Once I hit high school, I appreciated Tom’s coaching and I loved the team so much I decided to focus more on swimming than soccer,” Spiker-Miller said.

And he stuck with it, even when it wasn’t easy at first.

“It was definitely tough,” Spiker-Miller said. “(Tom) pushed me beyond anything I’ve done before and it was a mental state I had to get used to. There were times I thought this is way tougher than I am enjoying and this is not really worth it. But he kept me going and working at it, and when I made state is when I saw the reward from all those troubles and knew it was definitely worth it.”

The reward was qualifying for the state meet as a freshman in 2019 in the 50-yard freestyle and the 100 butterfly and he finished 15th and ninth, respectfully. Then came last season after his first offseason spent with the Laramie Swim Club.

But it was his stunning upset state title victory in the 100 fly when everything clicked in a sport he began only three years earlier.

“It was fantastic, and I felt so blessed,” Spiker-Miller said. “I was just beyond ecstatic and I was so proud of myself and Tom for helping me get there. It was something I could really appreciate and can say, ‘hey, I did this.’”

Spiker-Miller is the only Plainsmen who qualified in all eight possible swimming events heading into this state championship. “I have been pretty consistent the entire season and hoping for another jump at state,” he said.

Much like Spiker-Miller, Bressler started to seriously compete in diving three years ago as a freshman after transitioning from another sport. But it was about 10 years of previously being a gymnast that helped his crossover.

“When I started diving, it started rolling for me and it got easy,” Bressler said last season. “I stopped gymnastics in my freshman year so I could put all my effort into diving. Gymnastics prepared me for this and having the skill set makes me like it more and already makes me a better diver.”

“It was good for a sophomore to get third at state, and I think I could’ve got first if I didn’t screw up a couple of dives,” Bressler said. “But I was proud of myself and I’m really excited for this year after putting so much into it.”

Bressler, as he has the past couple of years, spent the offseason with the Wyoming Diving club team, coached by UW diving coach Ted Everett. Ben Hert, a former UW diving coach (2004-09) who also has a resume a mile long, has been coaching the LHS boys and girls divers for six years.

“I didn’t not miss a single day (of club) and Ted is a phenomenal teacher,” Bressler said. “I was able to raise the difficulty on some dives and keep working on them to make them better.

“(Herdt) has so much experience and coached Olympians in Australia. Knowing he is such a good coach, I trust him so much. If he tells me to do it, I do it because I know where he comes from.”

Bressler shattered the 11-dive school and conference record two weeks ago at the 4A West-Central Conference Championships with 523.50 points. The old record of 479.80 was set in the early 2000s by Trent Weitzel, a former state champion and twice runner-up who later coached diving at LHS for 13 years.

“This season has gone really well and I was able to exponentially grow from where I was at,” Bressler said. “(At conference), I was in a really good mindset, feeling really good, didn’t let scores bother me and did the dives I knew how to do.”

The quest for a four-peat

Cheyenne Central was runner-up at 239 and Kelly Walsh was third at 232. Hudson ranked the Plainsmen (on paper) third heading into that state meet.

In 2019, the Plainsmen cruised to the state title with 257 points, followed by Thunder Basin (186) and Kelly Walsh (185) battling it out for second place.

According to Hudson, this state meet has all the makings of another down-to-the-wire finish, decided by the final 400 freestyle relay.

“We had a ton of close meets and it was really competitive,” he said. “As with everything, we were just really happy to have a season and hoping to complete a season.

“Coming into this year, I knew we would be in kind of a rebuilding state, and that’s kind of how it was. I didn’t know if we would be competitive or not at the top end, but it turns out just like I thought. Kelly Walsh is right there, Cheyenne Central is right there and so is Laramie. It will be one of the closer state meets we’ve had a while. There’s a lot of parity in boys swimming right now.

Hudson’s preseason goal was 15 state qualifiers, and the Plainsmen did one better when freshman qualified for state in the 50 free at the Last Chance Meet last weekend.

“Out of our 16 state qualifiers, three of them are divers and 12 of them have at least two events and that’s pretty good,” Hudson said. “It does give us a well-rounded approach with at least someone in every event. I don’t know if they will all place, but they will be in them which doesn’t always happen.”

Laramie finished the season 21-0-01 in duals with the tie against Cheyenne Central and two close wins against Kelly Walsh 95-91 and 94-92. Laramie was then clipped by the Trojans by two points (437-435) two weeks ago at the 4A West-Central Conference Championships that also had Natrona County competing at the LHS Natatorium.

David Watson is the WyoSports assistant editor. He can be reached at dwatson@wyosports.net or 307-755-3327. Follow him on Twitter at @dwatsonsports.