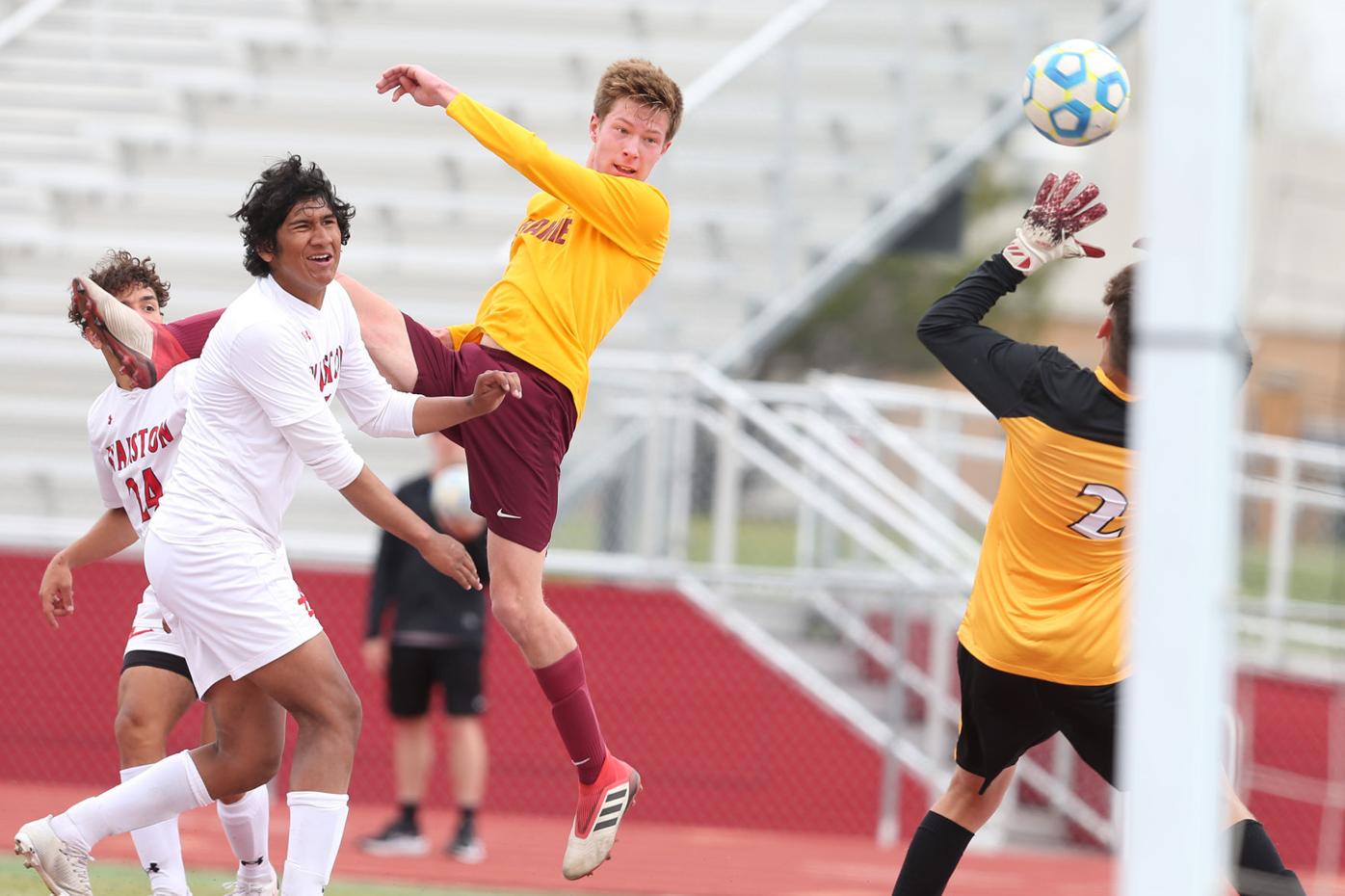 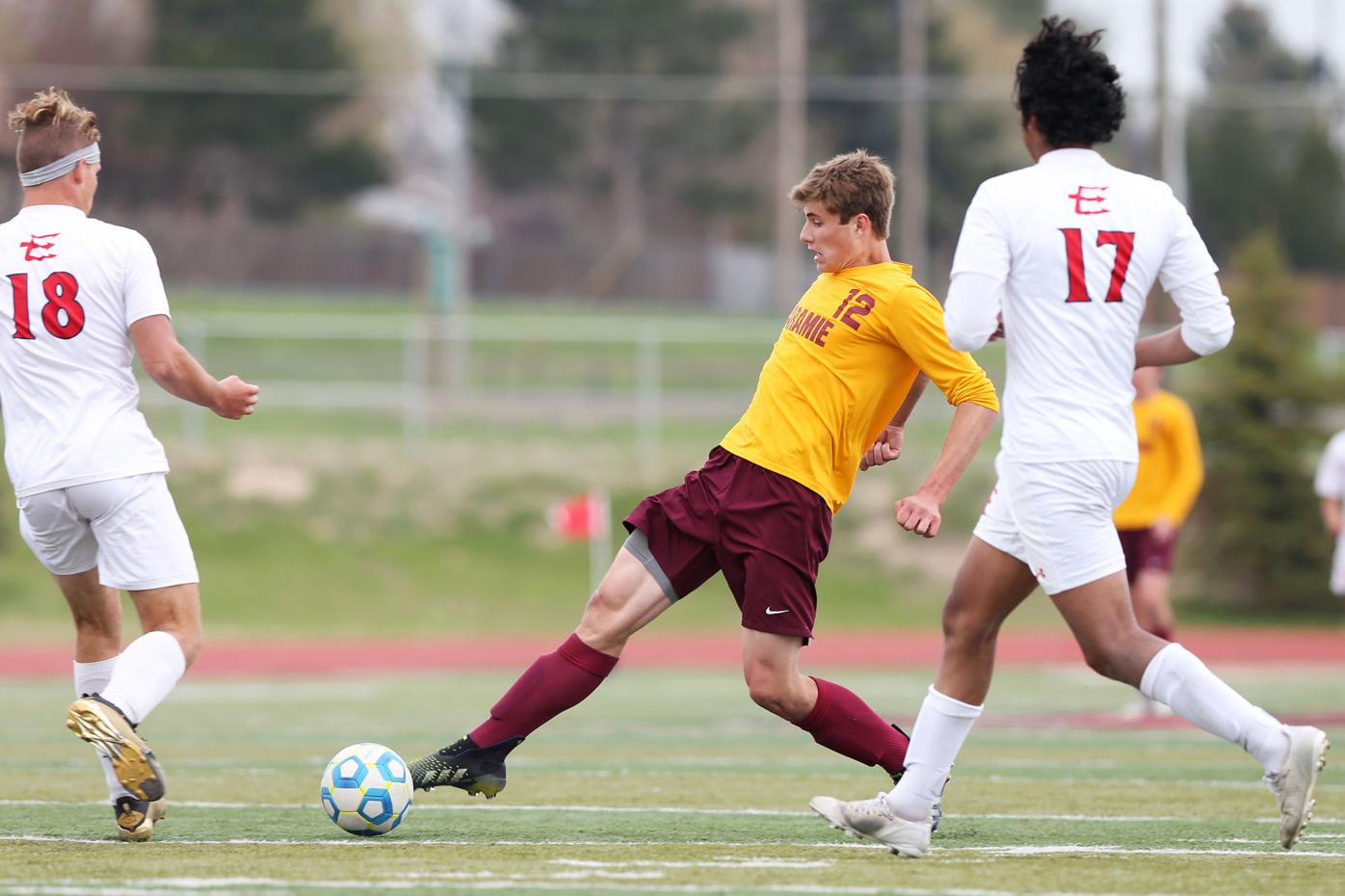 Laramie junior Cameron Hoberg, center, pokes the ball to a teammate during a Wyoming Class 4A Boys Soccer State Championships consolation semifinal game against Evanston Friday, May 21, at Riske Field in Cheyenne. 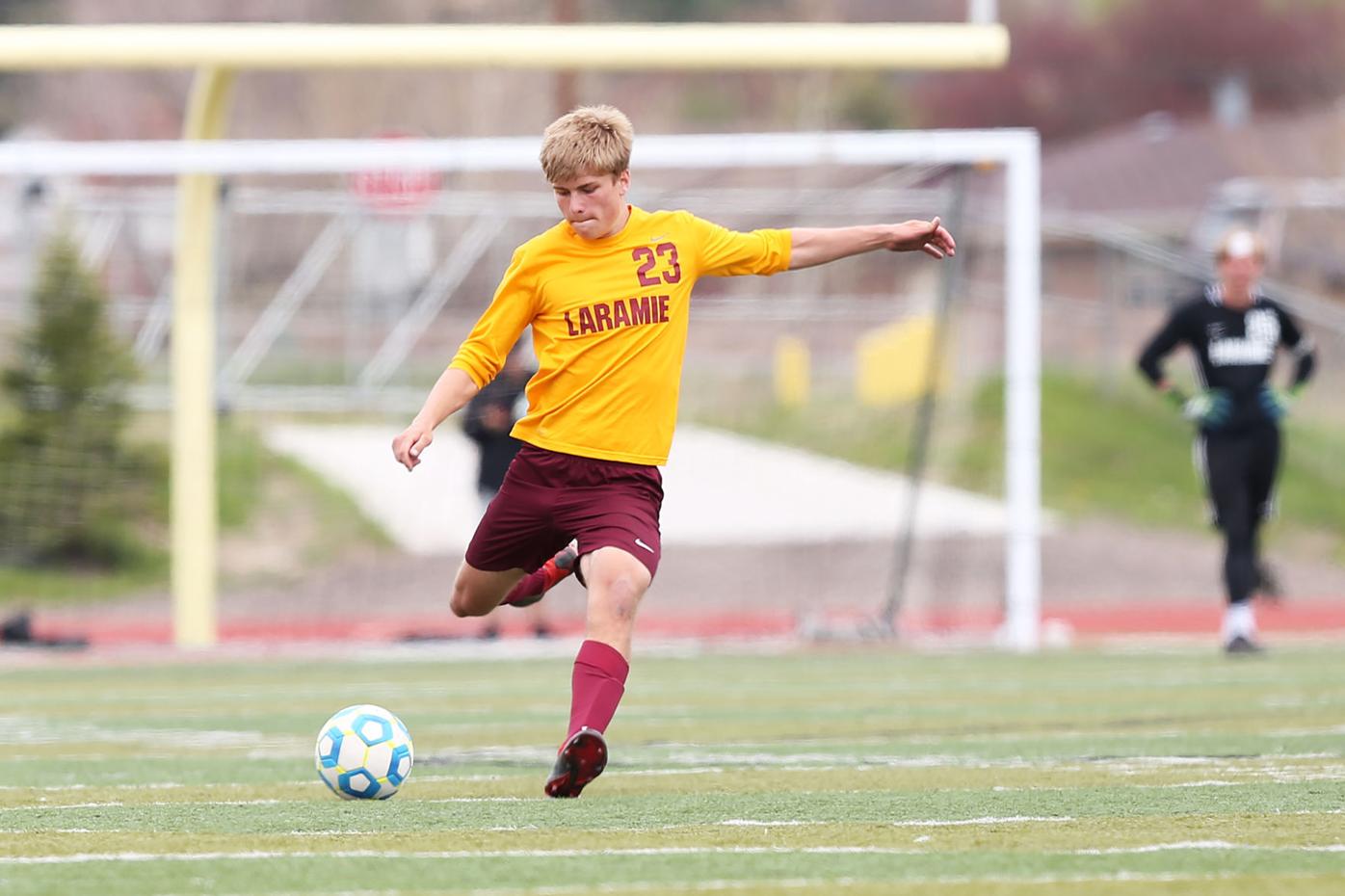 Laramie junior Cameron Hoberg, center, pokes the ball to a teammate during a Wyoming Class 4A Boys Soccer State Championships consolation semifinal game against Evanston Friday, May 21, at Riske Field in Cheyenne.

CHEYENNE — The Laramie High boys soccer team wanted nothing more than to put Thursday’s 9-1 loss to Jackson in the quarterfinals of the Wyoming Class 4A Boys Soccer Championships in the rearview mirror.

On Friday, the Plainsmen (10-7 overall) did just that and picked up a 2-1 win over Evanston in an elimination matchup in the consolation bracket.

“We just kind of started with a clean slate and decided we were going to put that behind us because that’s not really who we are,” Laramie senior Kelton Spiegelberg said. “We decided to come out and play our game (Friday) because we really needed this one.”

Added Laramie coach Anne Moore: “Yesterday was an anomaly, I don’t know where it came from, but we met this morning, had breakfast and said 'Hey, today's a new day let's start over. We know what we need to be doing, let's not let this be our last game.'"

The third-seeded Plainsmen struck first a little more than midway through the first half. In the 25th minute, senior David Tangeman set up for a penalty kick after an Evanston foul occurred inside the box. Tangeman buried the goal for the 1-0 Laramie lead, but the Red Devils quickly responded, netting a goal two minutes later to tie it up.

Laramie started the second half attacking the ball and attacking the net. In the 49th, Spiegelberg found freshman Karson Busch at the top of the 18-yard box, who had some space and a good look at the net, but Busch sent the shot high.

“We came out well, the first 15 minutes we were passing really well, had a ton of shots," Moore said. "Then the ball started going in the air and we got into that type of game, which isn’t our type of game, and we put it back on the ground and had more success in the second half."

Evanston countered with a few chances of its own. David Perez found Jafet Godina three minutes later who had an open shot, but also sent the ball high. Shortly after, an Evanston corner kick led to a shot from Perez that went just left of the frame.

Shots continued to fly for Laramie, who maintained possession for most of the second half, but couldn’t get anything past Evanston goalie Ryan Worley, until the 75th minute.

After a few adjustments in their front line, Moore finally figured how to get the Plainsmen’s attack to finish its looks. Spiegelberg, who is usually roaming the top of the box and dishing out assists, was moved to the right side of the field. The switch immediately worked and Spiegelberg found junior Cameron Hoberg slashing to the net in the middle of the field, who netted the eventual game-winning goal.

“I wanted to put Kelton out wide so he would have all of that space,” Moore said. “I kept moving him around because they kept following him everywhere … we just had to get the defense off balance some way.”

“It feels good to have one last game,” Spiegelberg said. "One last round with all my family.”