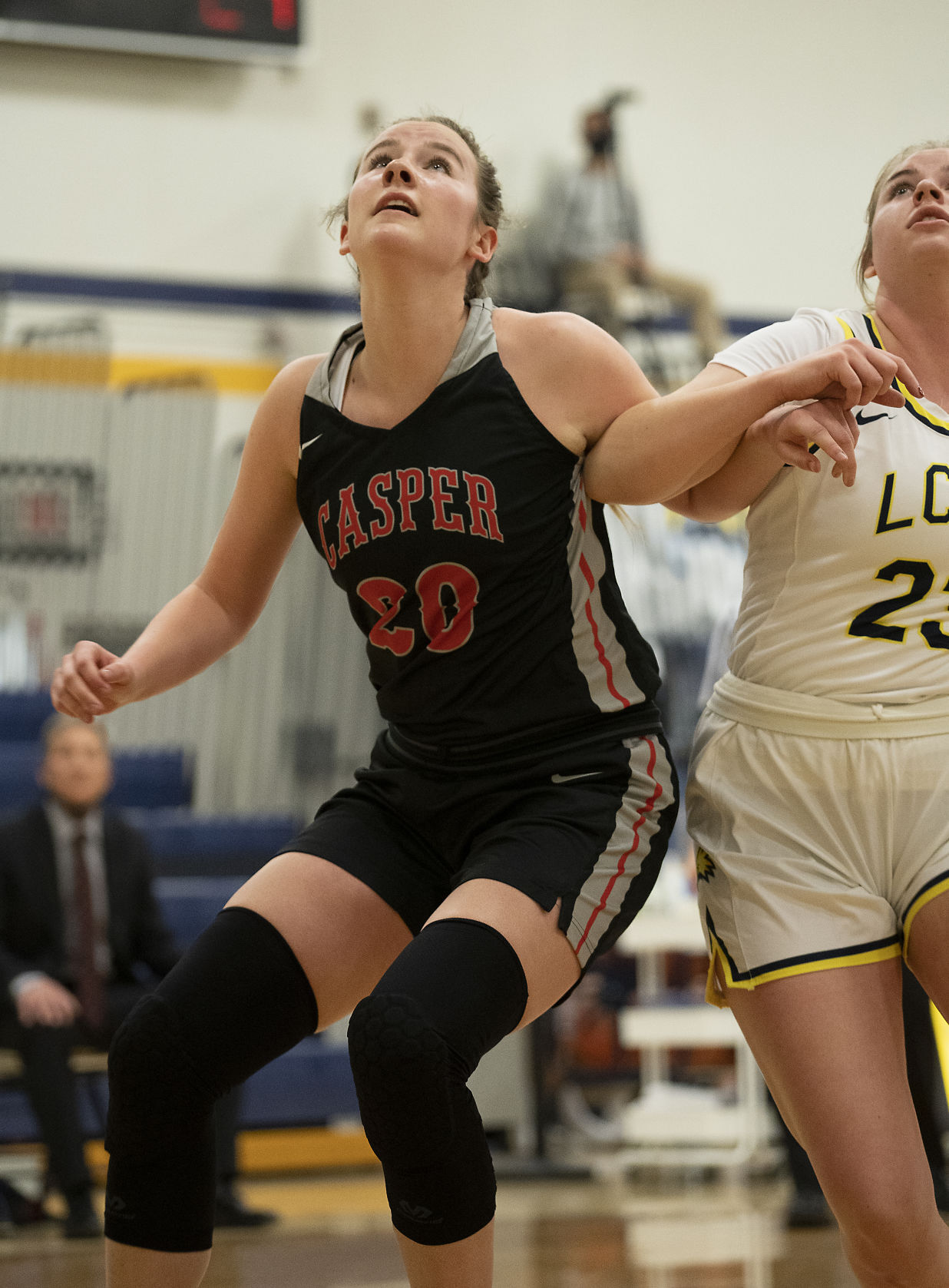 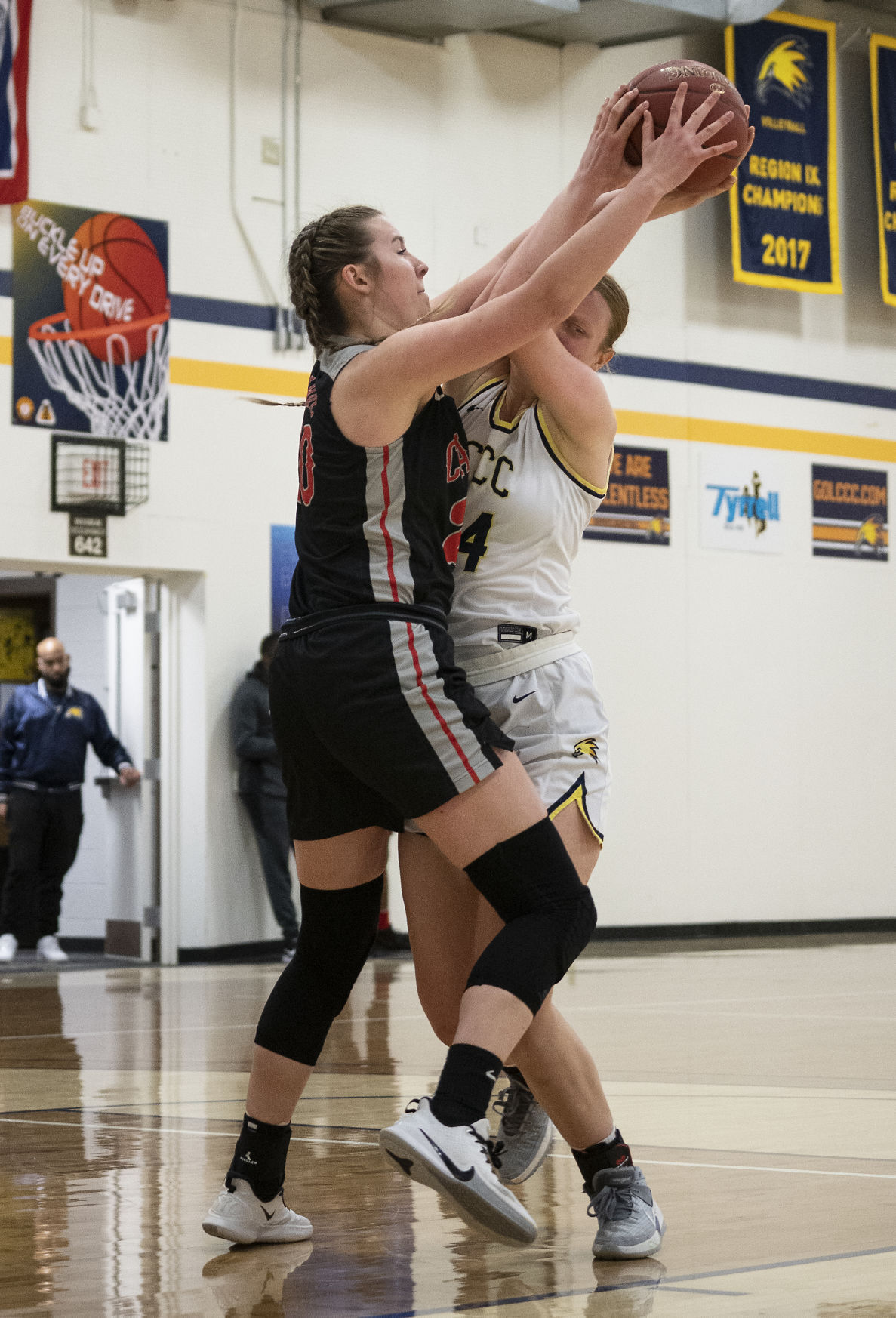 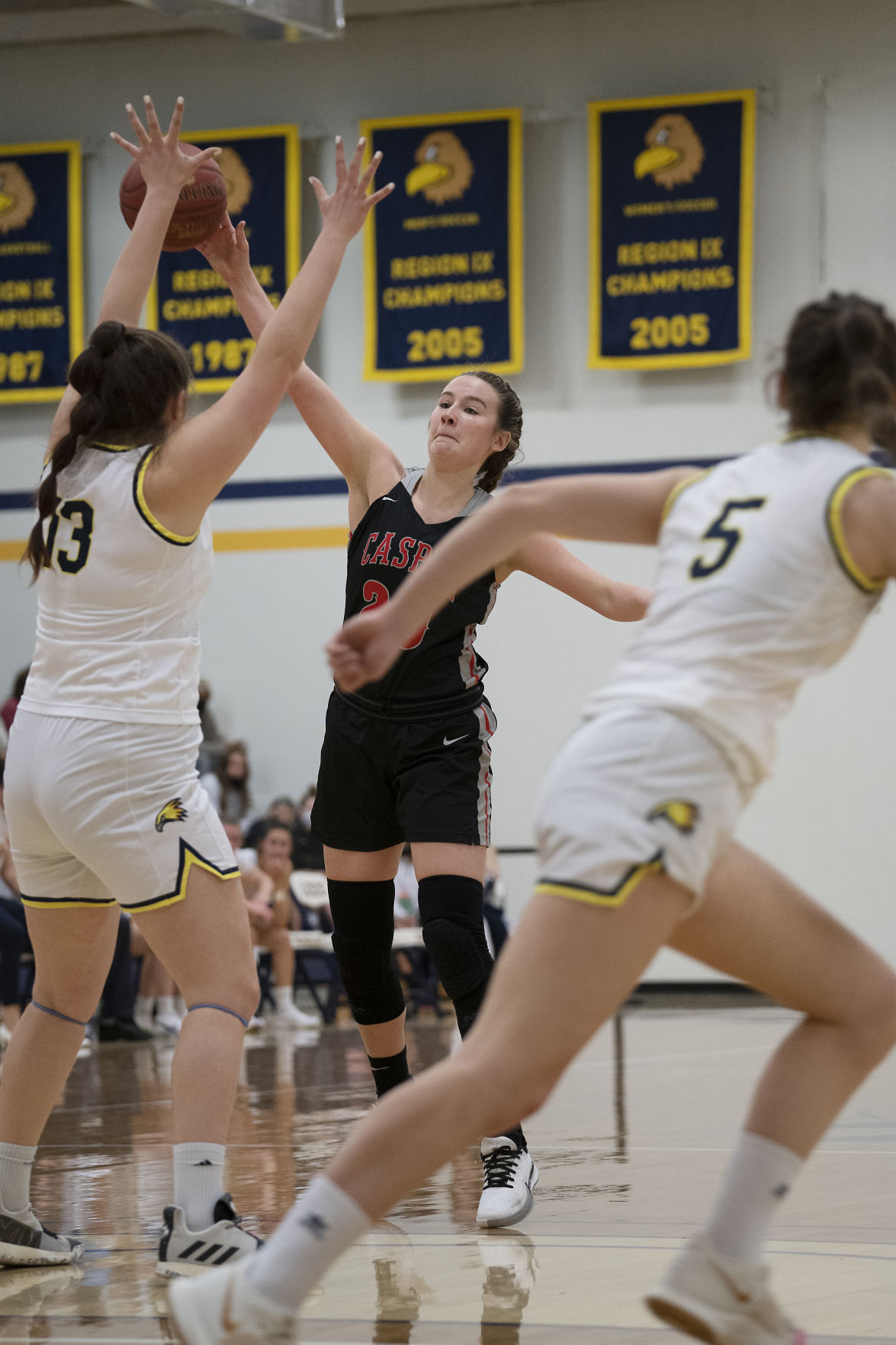 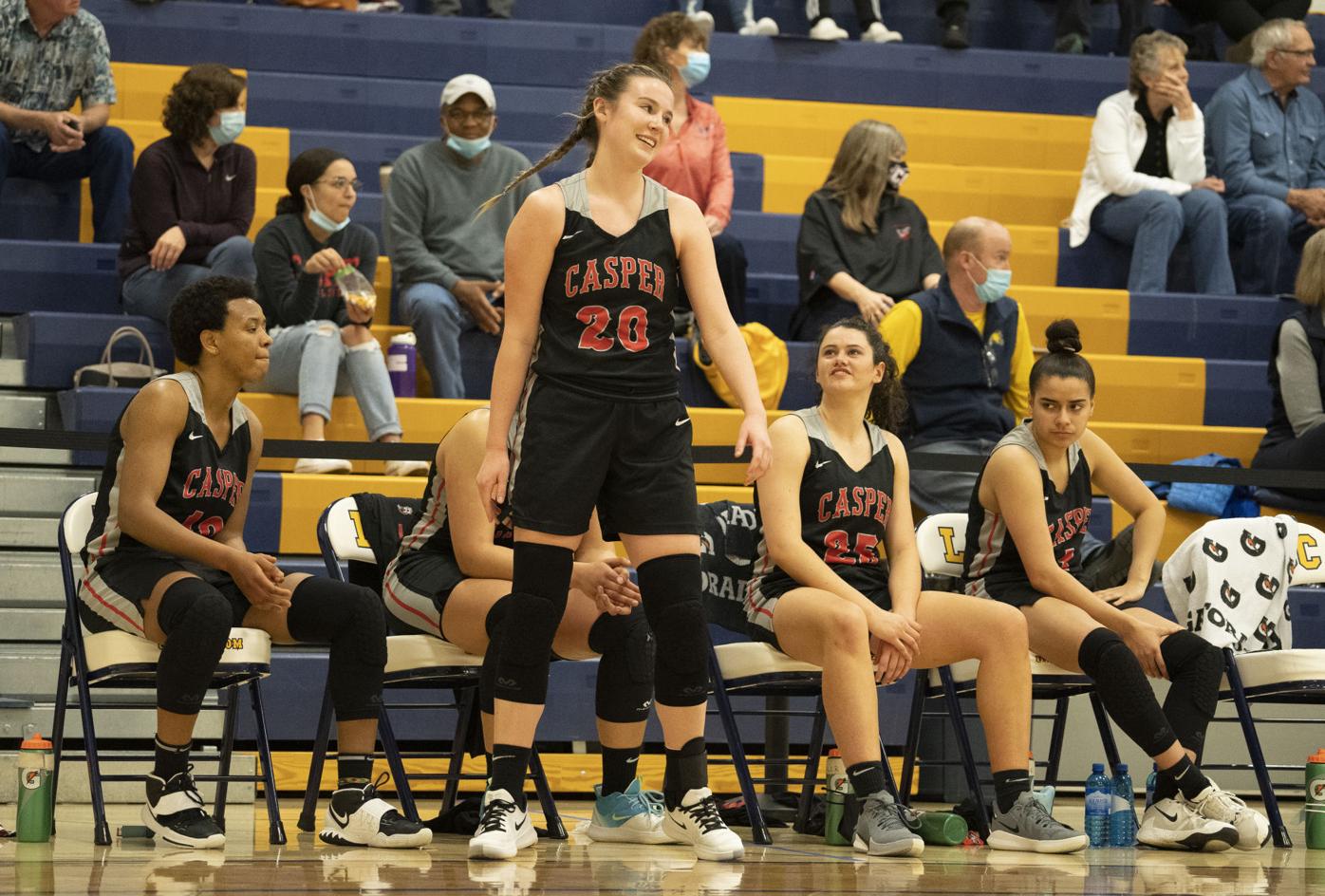 Casper College sophomore Kammie Ragsdale (20) reacts to a play during the Lady Thunderbirds 88-65 victory over Laramie County Community College on March 20, 2021, in Cheyenne. 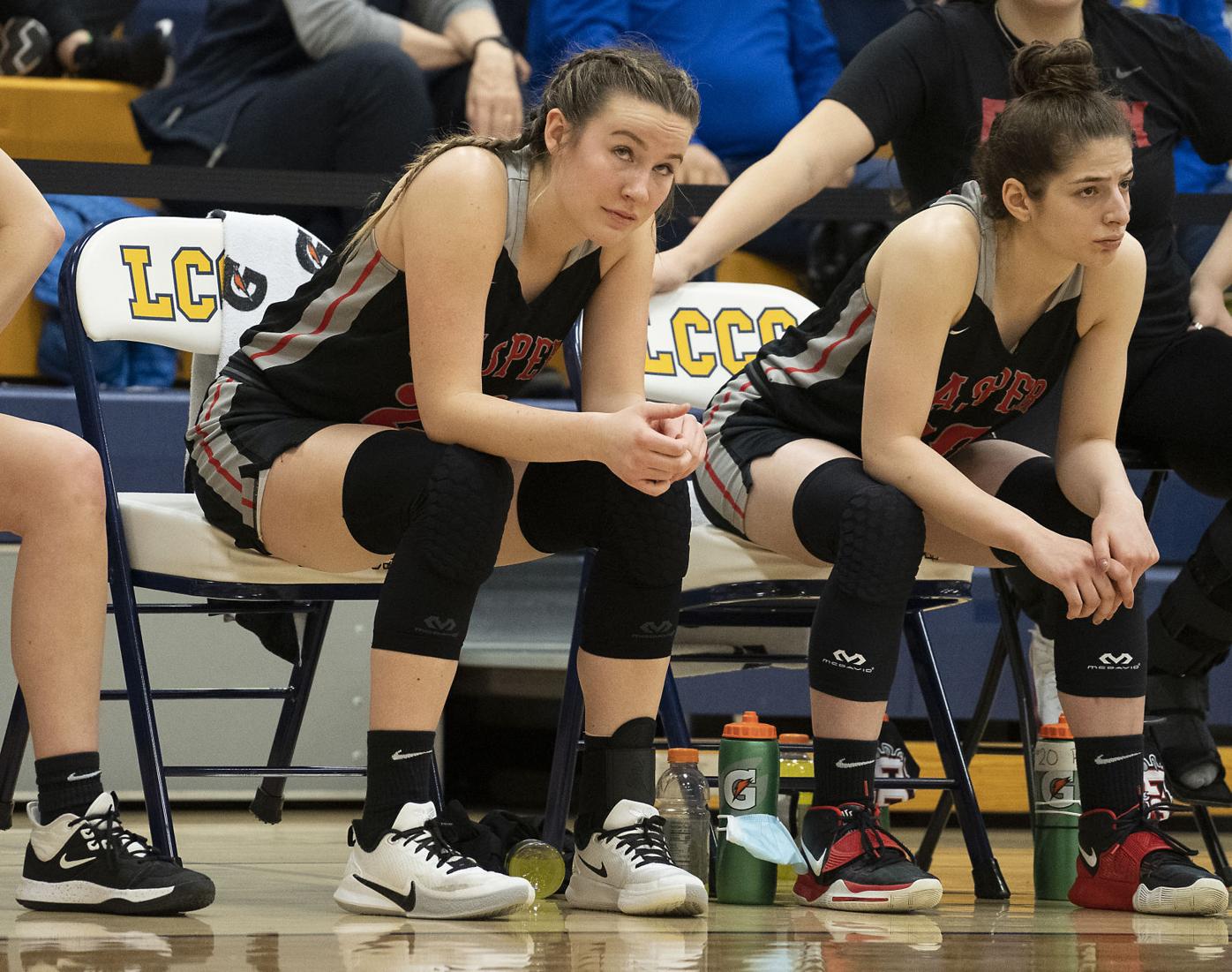 Casper College sophomore Kammie Ragsdale (20) reacts to a play during the Lady Thunderbirds 88-65 victory over Laramie County Community College on March 20, 2021, in Cheyenne.

CHEYENNE – On any other team, Kammie Ragsdale would average more points per game.

On any other team, the Pine Bluffs alumna would probably be in the running for all-region honors.

The Lady Thunderbirds are the No. 3-ranked team in the National Junior College Athletic Association, and enter next week’s Region IX tournament with a 20-0 record. Casper has seven players averaging at least 7.6 points, and another who checks in at six points per contest. It has outscored its foes by an average of 33.1 points.

“We have a lot of good scorers on our team, and they share the basketball really well,” T-Birds coach Dwight Gunnare said after his team won March 20 at Laramie County Community College. “What I like about this team is nobody is worried about whether they’re averaging double figures.

“If we weren’t so balanced scoring-wise, Kammie could be averaging 14 or 15 points. To her credit, that’s not more important to her than getting a win and playing good team basketball.”

As a freshman, Ragsdale averaged 7.8 points and 3.2 board to help Casper go 29-3 and win the Region IX title. The T-Birds qualified for the NJCAA tournament, but it was canceled due to the COVID-19 pandemic.

Winning 49 games in two seasons has only made Ragsdale’s time in Casper more enjoyable.

“This has been an experience I won’t forget,” Ragsdale said. “I love it up at Casper. I love my coaches and the girls I have played with both years. They’re irreplaceable. It’s been a very memorable experience and a lot of fun.”

Ragsdale was a four-time all-district honoree and a two-time All-Class 2A pick during her time at Pine Bluffs High. During her senior campaign, Ragsdale led 2A in scoring, and helped the Hornets finish third at state.

She quickly adapted to college basketball, but her adjustment to the new level of the game followed a similar trajectory to countless other players Gunnare has coached.

“There’s an adjustment for everyone coming from high school and AAU ball to the junior-college level,” he said. “These players will have to adjust again when they go to a university. Hopefully each level they move to is a little bit more challenging than the last.

“There are games where she’s been a guard and games where we’ve had her back to the basket quite a bit,” Gunnare said. “She is a really hard matchup for a lot of teams. She can score on the perimeter because she is a good 3-point shooter, and she can score with her back to the basket. Plus, her basketball IQ is great. She understands the concepts very well offensively and defensively, and she is really long. Her versatility has been a real asset for us.”

Ragsdale is used to shifting roles.

She grew up playing guard on travel teams, but started her high school career playing in the post. She moved back to guard as a senior. That versatility has helped Ragsdale shine at the college level.

“Playing all those different roles in high school really helped me,” Ragsdale said. “I swing from the 3 to the 4 and 5 here. It’s important for me to be able to guard all those positions and know my defensive assignments for each game.

“Playing so many roles in high school helped me understand what it takes to stop whatever player is in front of me.”

On-ball defense was the biggest adjustment Ragsdale had to make. While she saw some shifty guards in high school, she regularly sees backcourt players better than any she lined up across from before college.

“The players at this level are more athletic, and they’re bigger than any I had to contain on the dribble in high school,” Ragsdale said. “I had to get a lot better at on-ball defense in order to play at this level.

“I also had to get a lot better at the little things, like blocking out, defensive assignments, containing the dribble and moving my feet. I’m way better than I was because I (ground) through practice. It wasn’t always fun, but I got a lot better.”

Ragsdale has had a number of four-year schools reach out to her about suiting up for them next season. She is currently weighing her options, and knows more will come if Casper can reach the NJCAA tourney again this month.

She is trying to soak up every moment after last season ended so abruptly. Ragsdale welcomes the pressure that comes with being undefeated and having a single-digit national ranking.

“After we weren’t able to finish last season, I want to go as far as we can and be as good as we can,” she said. “Being so highly-ranked makes it easier to come to the gym for practice because things are going so well, but there’s also a lot of pressure.

“Anyone can beat you, and we have a big target on our backs.”