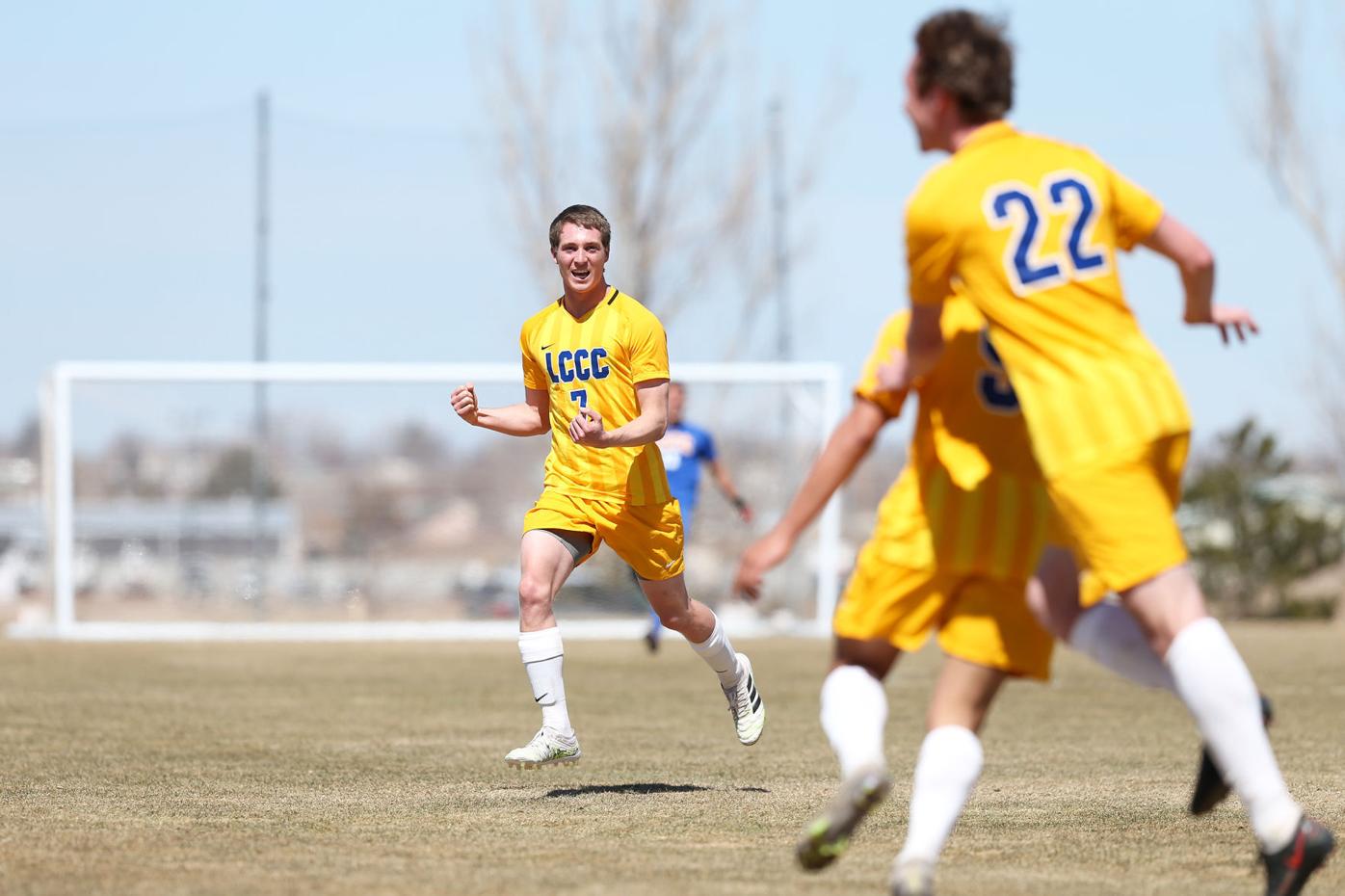 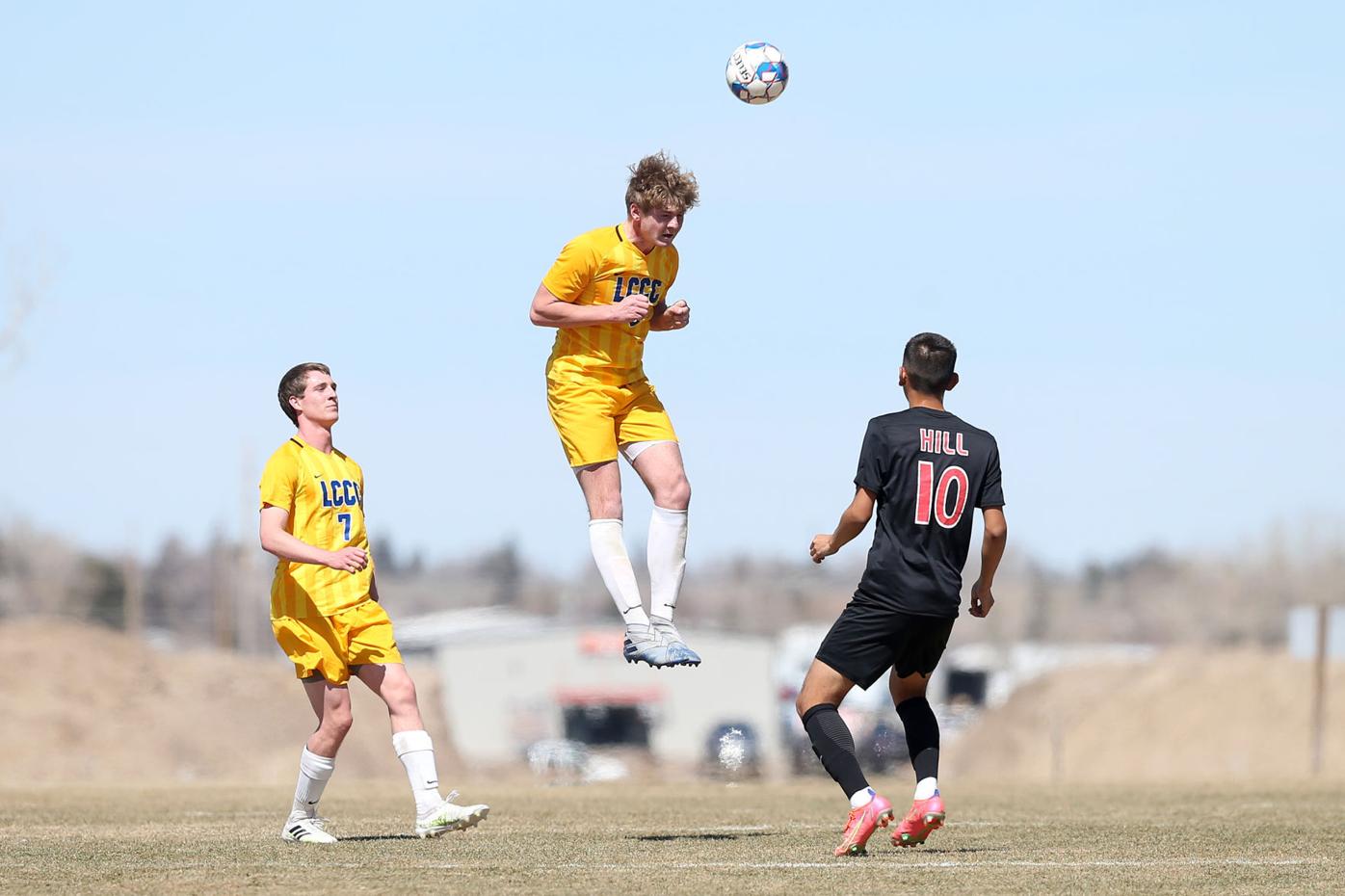 Laramie County Community College freshman defender Cole Van Holland uses his head to clear a pass out of the box during a game against Hill College Friday, April 2, 2021, in Cheyenne. The Golden Eagles defeated the Rebels 1-0. Michael Cummo/Wyoming Tribune Eagle

Laramie County Community College freshman defender Cole Van Holland uses his head to clear a pass out of the box during a game against Hill College Friday, April 2, 2021, in Cheyenne. The Golden Eagles defeated the Rebels 1-0. Michael Cummo/Wyoming Tribune Eagle

CHEYENNE – Laramie County Community College men’s soccer coach Vince Gibson knows his teams must be strong in at all four levels of the formation if they’re going to win matches.

However, he’d be lying if he said he didn’t demand a little more from his defenders. Gibson grew up playing defense, serving as the sweeper in a sweeper-stopper scheme.

“It’s not really a defense you see played now,” he said with a laugh.

This is the Eagles’ second trip to the NJCAA tournament. They reached the semifinals of last season’s championship despite surrendering 1.44 goals per game over the course of the season.

LCCC thought it had the players necessary to improve upon its goals against average this spring. Sophomore Imourana Naite started all 20 games of the 2019 campaign and was a second team All-Region IX selection. Sophomore Ethan Mathis – a Cheyenne Central graduate – started 18 of 20 contests.

Mathis was a midfielder during his Cheyenne Central career, but has adapted to and learned to love his role at LCCC.

“I’m glad coach had the confidence in me to switch positions,” he said. “I love it. You can still get up and help out in the attack, but you also get to be physical and do the dirty work.”

They got a boost in January when sophomore Jose Bencomo was added to the roster. Bencomo spent his high school years as part of the Colorado Rapids youth academy and even suited up for the United States under-17 national team. He started his collegiate career at NCAA Division I Utah Valley University in Orem, Utah, playing in three matches as a true freshman before redshirting as a sophomore.

He had a brief stop at Salt Lake Community College before the COVID-19 pandemic brought life to a halt. As colleges reopened last fall, Bencomo was reluctant to leave his family in Aurora, Colorado.

“I didn’t want to do anything that was going to jeopardize my health, or the health of my family,” he said.

His opinion changed the more he followed research about the novel coronavirus’ impact on young people and as vaccines became more widespread.

“Knowing that most young people weren’t as badly impacted by COVID put me at ease,” he said. “I realized it’s part of life and I can’t stay locked in my house and stay scared. I have to be safe, but I also have to live my life.”

Bencomo – a 6-foot-2 center back – reached out to Gibson about suiting up for LCCC in January, and made the first of his 12 starts with the school April 2. He had rust to knock off after having not played competitive soccer for close to 18 months, but quickly got up to speed. Bencomo is a vocal leader for the Eagles.

“They are all pretty good about communicating with each other back there, but he does a good job of keeping the right tone and directing people,” said Gibson, who was voted Region IX coach of the year this season.

Bencomo, Mathis and Naite have been fixtures in LCCC’s starting lineup. Gibson has used a matchup-based rotation of Bridge, Crocker and Espino-Kennedy to fill the left back role. Who gets the start largely depends on which player is better at shutting down what the opposition does best.

Keeping opponents off the scoreboard hasn’t fallen strictly on the shoulders of LCCC’s four defenders and sophomore goalkeeper Declan Domyan. Gibson wants all of his players to play a role in regaining possession, but he also employs a defensive midfielder. Freshman Cole Van Holland and sophomore Eric Thompson have split time in the role Gibson calls the No. 6.

“All those guys could be starters,” Mathis said. “We have so much depth across the entire roster. Being able to switch guys out depending on the matchup is a real luxury.

“It’s one of our strengths and one of the reasons we have kept getting better as the season has gone on.”

As good at the Eagles have been, Gibson is convinced they haven’t played their best soccer. Having the season moved from fall to spring kept them from scrimmaging the NCAA Division II teams and high-level junior college sides they rely on to expose their weaknesses.

LCCC has undoubtedly made progress, though.

“We’re not fine-tuned like we would be at this point in a normal season, but we’re better than we were when the season started,” Gibson said. “We’re defending better because we’ve figured out our shape, and we’re attacking better because we’re more comfortable with our roles.

“We’re going to give it a good run (at nationals).”

Defensive standouts weren’t the only LCCC players to be recognized for their play this season.

Sophomore midfielders Omar Castruita and Carlos Vargas also earned first team all-region honors. Castruita – who was first team All-Region IX and an All-American in 2019 – scored four goals and dished out six assists. Vargas added three goals and an assist. He was an honorable mention All-Region IX pick as a freshman.