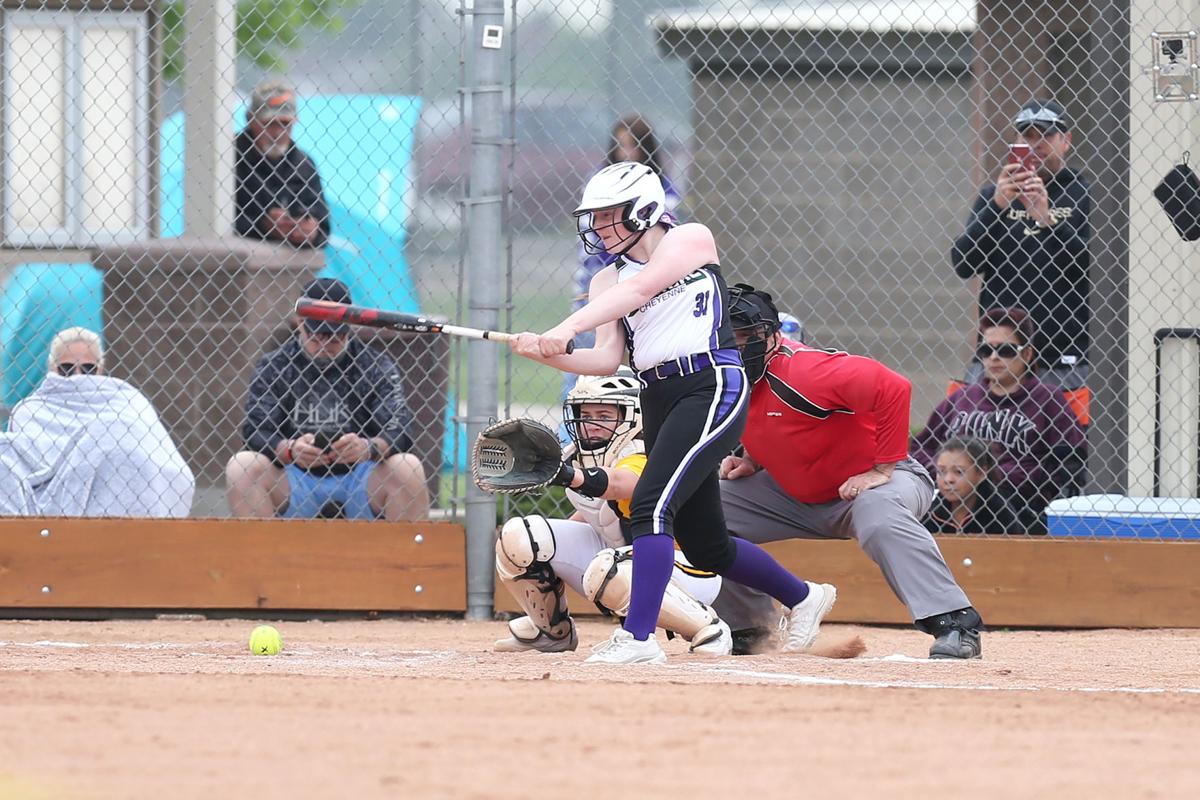 Cheyenne Extreme Jordyn Wright hits a ground ball during a game against the Colorado Stars Saturday, June 6, 2020, at Brimmer Field in Cheyenne. This was the first game of a four-game friendly round robin tournament for the Extreme. Michael Cummo/Wyoming Tribune Eagle 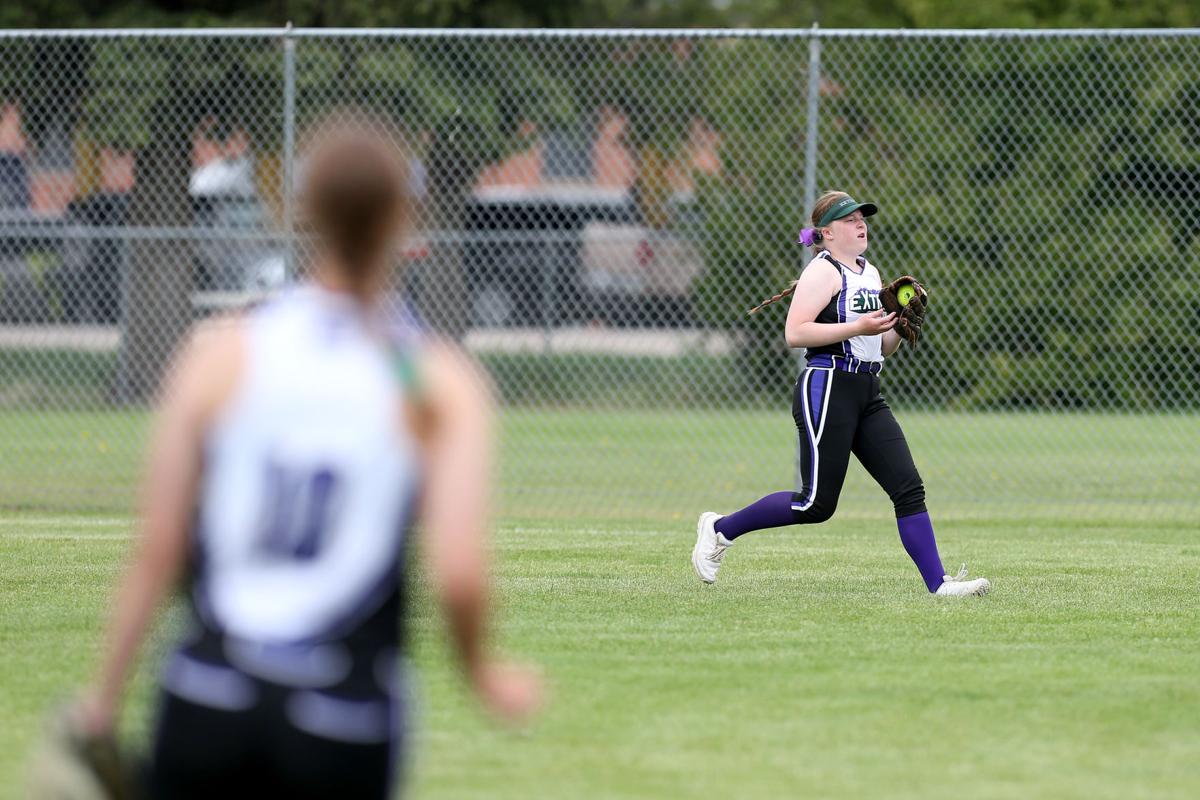 Cheyenne Extreme outfielder Jordyn Wright jogs toward the infield after catching a pop fly during a game against the Colorado Stars Saturday, June 6, 2020, at Brimmer Field in Cheyenne. This was the first game of a four-game friendly round robin tournament for the Extreme. Michael Cummo/Wyoming Tribune Eagle

Cheyenne Extreme Jordyn Wright hits a ground ball during a game against the Colorado Stars Saturday, June 6, 2020, at Brimmer Field in Cheyenne. This was the first game of a four-game friendly round robin tournament for the Extreme. Michael Cummo/Wyoming Tribune Eagle

Cheyenne Extreme outfielder Jordyn Wright jogs toward the infield after catching a pop fly during a game against the Colorado Stars Saturday, June 6, 2020, at Brimmer Field in Cheyenne. This was the first game of a four-game friendly round robin tournament for the Extreme. Michael Cummo/Wyoming Tribune Eagle

CHEYENNE – Like all seniors, Jordyn Wright’s final year of high school was upended by the COVID-19 pandemic.

She missed out on one last prom, a few more months of memories with her friends at Cheyenne South, her graduation ceremony was delayed by a handful of weeks and attendance at the event was limited.

There was a time Wright thought her final softball season also might be over before it started.

“I was mentally preparing myself for our last game of last season to be the last softball game of my career,” the Cheyenne Extreme outfielder said. “That really bummed me out. I wanted to have an idea of what my last game was actually going to be so I could prepare for it.”

Wright’s softball season was merely delayed for a few months, and she has tried to squeeze every last drop of enjoyment out of it.

“I have a greater appreciation for softball, my teammates and my coaches, and I’ve been trying to really enjoy it,” Wright said. “I learned it’s really true that you never know when your last game is going to come, so you should always enjoy it and play your hardest.

“That’s what I’ve tried to do this summer.”

Cheyenne (27-13-1) closes its season at the Farewell to Our Seniors tournament today and Sunday in Fort Lupton, Colorado.

Wright has posted a career-best .338 batting average (24 for 71) entering Extreme’s final tournament of the season. She has rapped nine doubles and driven in 13 runs during her third full season with Cheyenne’s under-18 squad.

Wright wishes her offensive numbers could have been better during her Extreme career. She describes herself as inconsistent at the plate. Wright and Cheyenne coach Adam Galicia have tinkered with her swing and approach to try to unlock her potential.

But Wright has never gotten too down on herself, despite the fact she hasn’t produced the way she wants to at the plate, Galicia said.

“She is always positive and a good example for our younger girls of someone that just keeps working and working, and is dedicated to her teammates, the coaches and the organization,” he said.

Wright’s ability with her glove has made her a mainstay in the lineup. She takes great pride in her defense.

“I want people to be able to rely on me,” said Wright, who will attend Laramie County Community College with her sights set on a career as a forensic psychologist. “They can rely on me to do well in the outfield.

Galicia plays Wright at both corner outfield positions. She will roam right field if junior left-hander Ariana Galicia is pitching. Wright will line up in left if sophomore righty Janey Adair is in the pitcher’s circle.

“The spin they put on the ball leads to a lot of pop flies and bloopers to those sides of the field,” Adam Galicia said. “We need someone out there who gets a good read on the ball off the bat and is able to go get it.

“She also has a strong enough arm to throw people out if they’re trying to get an extra base.”

That was true during the semifinals of last month’s Wyoming state tournament.

Cheyenne was nursing a 6-4 lead with one out in the top of the seventh inning against Gillette. The Blue Jays had the go-ahead run at the plate, but Madison Piercy flew out to Wright in right. Taylor Manning tagged up at second, and was gunned down at third to end the game.

“I almost cried when I did that,” Wright said. “I remember running to our dugout past third base, and everyone was swarming me and hugging me. That made my entire season. It was so much fun.”

Gillette came back through the loser’s bracket to face Extreme for the title. Cheyenne won that contest 10-1.

Wright’s heady play in the semifinals put Extreme in the driver’s seat at the tournament. The Blue Jays would have had to beat Cheyenne twice to claim the crown.

“We always talk to the girls about having a short memory and staying in the fight,” Galicia said. “Jordyn had two strikeouts at the plate that day, but she stayed in there and threw a dart to third that got (Manning) by 10 feet.

“That’s what happens when you have a great attitude and you’re constantly working.”