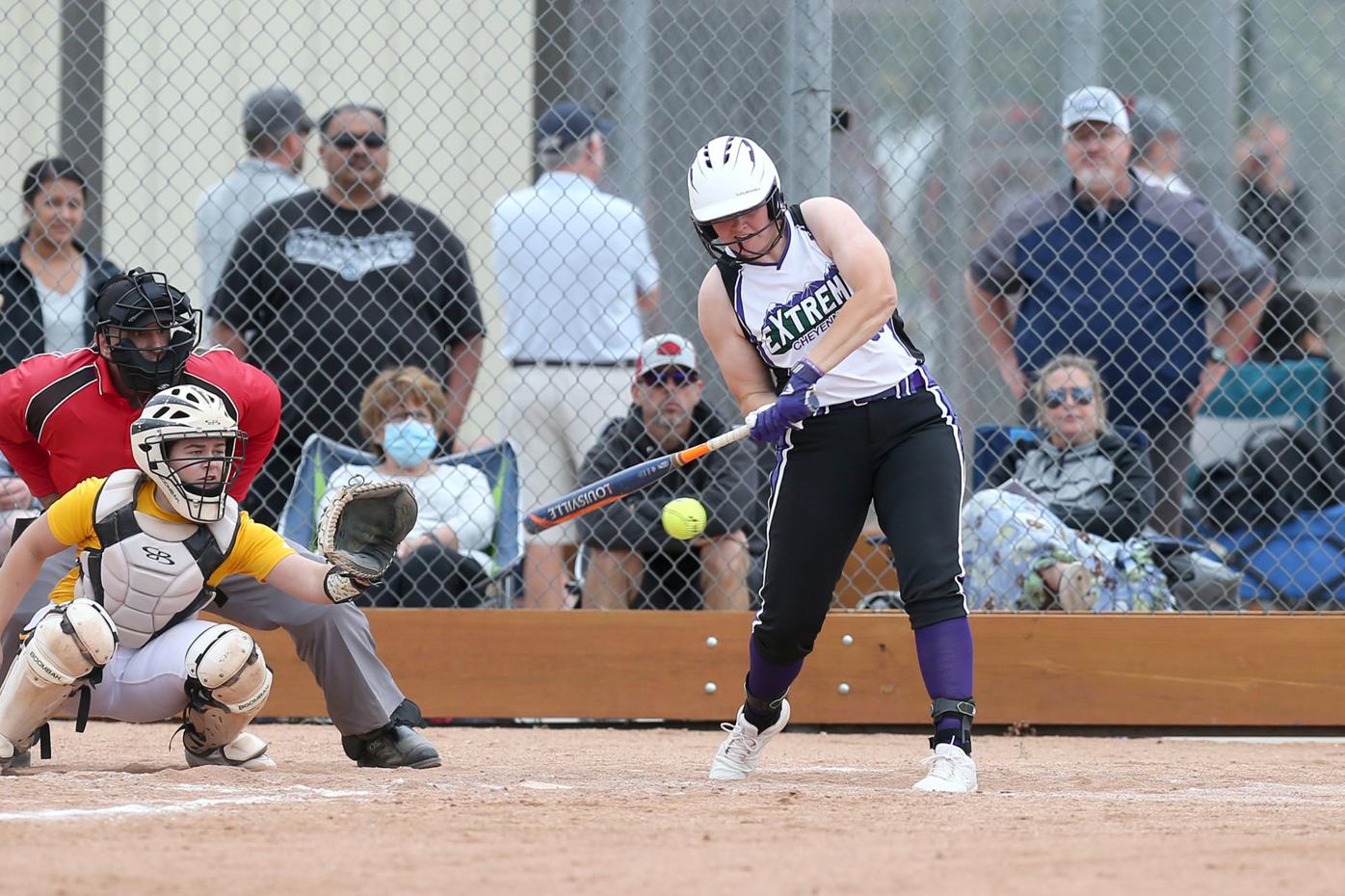 Cheyenne Extreme third baseman Brogan Allen connects with a pitch during a game against the Colorado Stars Saturday, June 6, 2020, at Brimmer Field in Cheyenne. This was the first game of a four game friendly round robin tournament for the Extreme. Michael Cummo/Wyoming Tribune Eagle 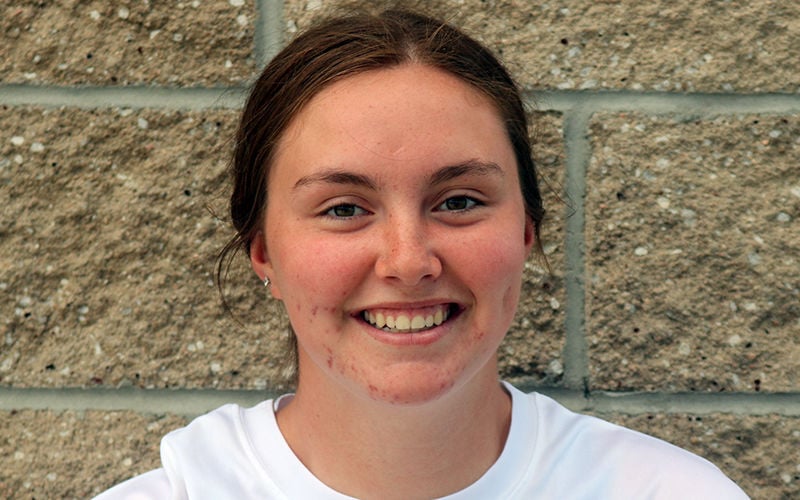 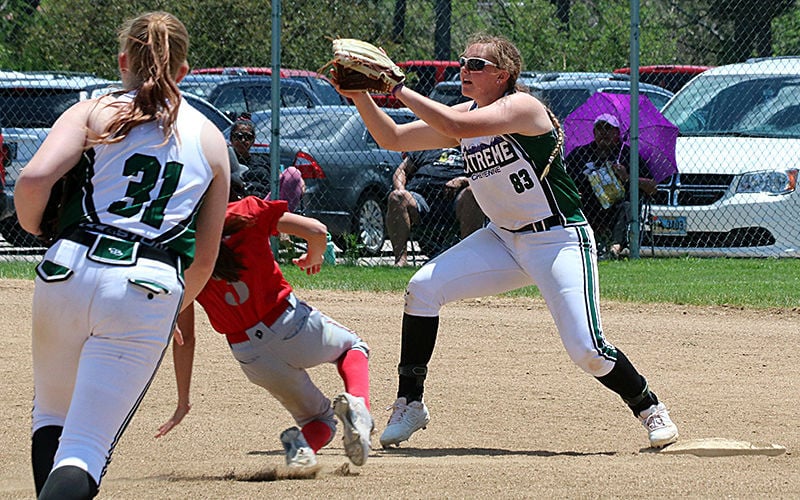 Cheyenne Extreme shortstop Brogan Allen waits for a throw as Broadway Bombers' Alex Jones slides into second during the second game of a doubleheader on Sunday at Converse Softball Complex in Cheyenne. The Extreme beat the Scottsbluff, Neb., club 5-0. 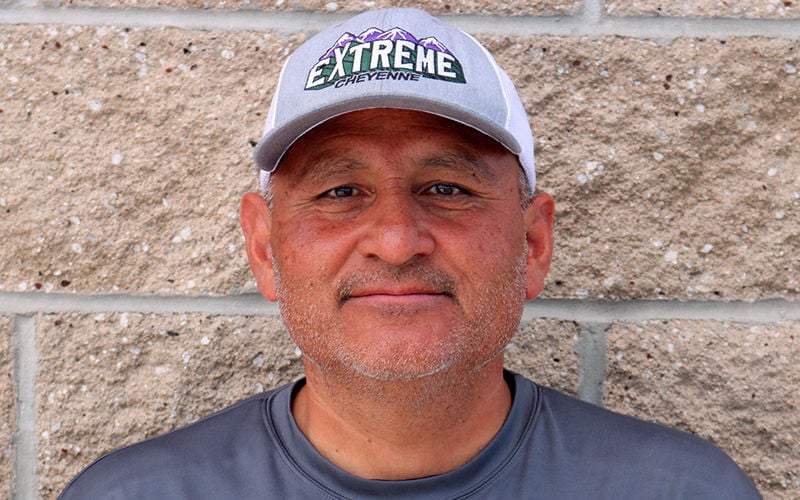 Cheyenne Extreme third baseman Brogan Allen connects with a pitch during a game against the Colorado Stars Saturday, June 6, 2020, at Brimmer Field in Cheyenne. This was the first game of a four game friendly round robin tournament for the Extreme. Michael Cummo/Wyoming Tribune Eagle

Cheyenne Extreme shortstop Brogan Allen waits for a throw as Broadway Bombers' Alex Jones slides into second during the second game of a doubleheader on Sunday at Converse Softball Complex in Cheyenne. The Extreme beat the Scottsbluff, Neb., club 5-0.

Allen couldn’t help it. She had friends in the other dugout, but she badly wanted to beat the organization she had played with for four seasons. The more she watched Extreme, the more she realized she could get everything she wanted from softball by coming home.

“When our age group team broke up, I thought I would get more exposure to colleges by playing down in Colorado,” said Allen, who was 1 for 2 with an RBI during that 17-13 loss to Cheyenne. “I didn’t really feel like the team I was playing with was all that motivated, or that they wanted to play a lot.

“Watching Extreme, they were very motivated and driven. They really supported each other. It was phenomenal. It made me want to come back up here.”

Allen is back wearing the dark green and purple Extreme uniform. She also is excelling.

Her .396 batting average (21 for 53) ranks third on the roster. Her three home runs are tied with Taylor Klein for second-most. Allen’s 23 RBIs are the best on the team.

“She is a big bat, and really consistent,” said senior Kenzie Boltz, who leads Cheyenne with four home runs. “It took her a little while to get going, but, once she got going, she really took off. She has really got it rolling.”

Allen went 3 for 18 (.167) with a double and three RBIs across her first 10 games with Extreme this season.

“I couldn’t get a hit to save my life earlier this season,” she said.

The simplest change yielded results for the 5-foot-9 Allen.

“I had to start getting lower when I was batting, because I was basically standing straight up before,” she said. “I needed to get into a position that helped me make better contact with the ball and kept me from dipping my back shoulder and popping it as much.”

Cheyenne assistant Michael Galicia helped Allen work the kinks out of her swing. She spread her feet farther apart and got into a lower, more athletic position. She also has learned to lay off inside pitches, Extreme head coach Adam Galicia said.

“In addition to being in a more athletic stance, we wanted her to start finishing out over the plate instead of on her front leg,” the coach said. “She loves the inside pitches, but it’s not her best pitch to hit. We have gotten her focused on pitches on the middle and outside of the plate.

“She is really on target and doing a great job of driving the ball.”

Driving the ball is all Allen wants to do when she steps to the plate. That simplistic approach has helped.

The addition of Allen shuffled and filled holes in Extreme’s lineup. Cheyenne graduated utility player Maggie Seghetti and center fielder Jordan Harris from last season’s state championship squad. Kaylee Wilson – who split time at third with Seghetti – moved to center field in place of Harris. Allen took over at third, and also has played shortstop when Klein hasn’t been available.

Allen is good with the glove, but her best attributes might be keeping the ball in front of her, and not compounding mistakes. Defense is another area where Allen made changes this year, learning to get her whole body low to field a ground ball instead of just bending at the waist.

Galicia has been impressed by Allen’s willingness to make adjustments.

“She isn’t perfect in the field, but she gives 100% effort all the time, and makes as many plays as she can,” he said. “(Allen) is working really hard, soaking everything up, and is excited to be out here. She feels like the coaches are excited about her. When players feel like that, they’re excited to practice and excited to learn.”