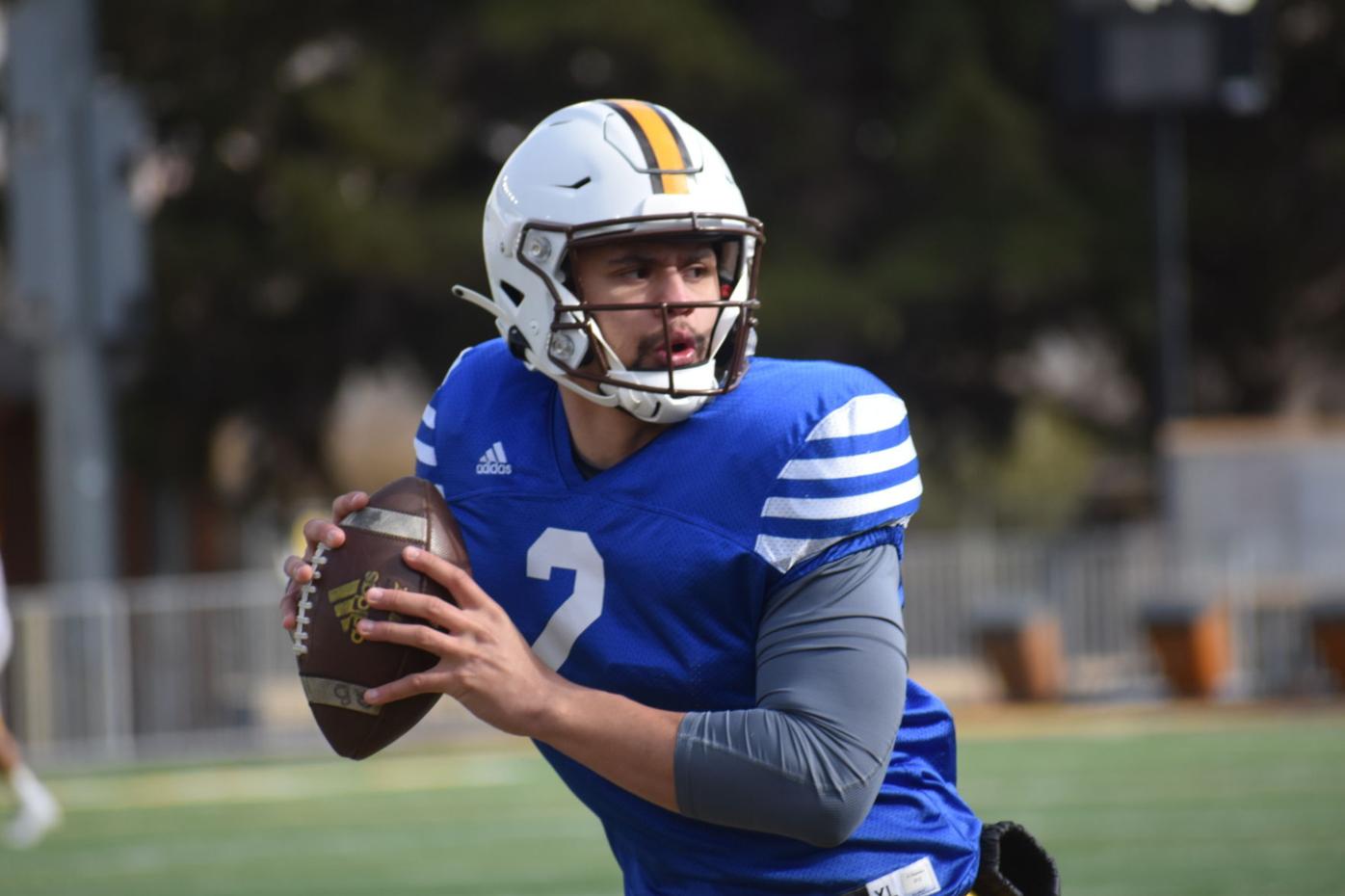 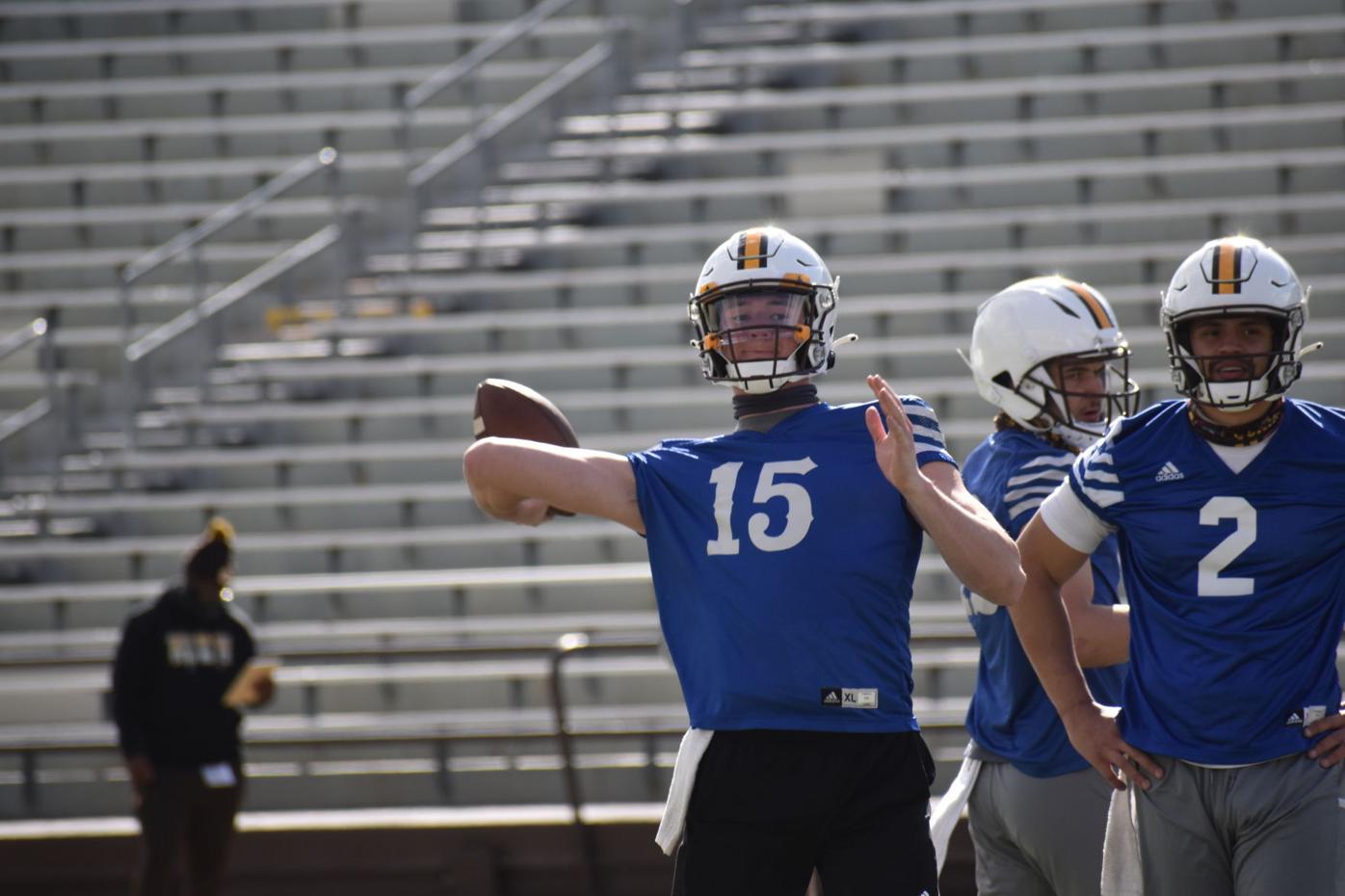 LARAMIE – If passes are going to end up where their throwers intended, it’s all going to start with the feet.

First-year University of Wyoming offensive coordinator Tim Polasek hasn’t worked directly with quarterbacks since the 2003-04 season at Wisconsin-Stevens Point, but he’s well aware that he has some things to fix when it comes to Cowboys signal callers Sean Chambers and Levi Williams.

The numbers over the past three seasons for UW quarterbacks largely tell the story.

Since 2018, the Cowboys have ranked 125th, 128th and 123rd in completion percentage with a mark well under 50% each season. In an era of high-flying spread offenses, UW averaged just 153.3 passing yards per game in 2020, which was actually an improvement of nearly 20 yards from the season prior. To put that number in perspective, the nation’s leading passing attack (University of Florida) averaged 378.6 yards through the air per game.

Much of the Cowboys’ attrition in the passing game can be linked to circumstance: Chambers, a redshirt sophomore, broke his left leg on the first drive of the season against Nevada. Then redshirt freshman Williams, who started the 2019 Arizona Bowl, largely struggled in relief over six games, throwing for a total of 877 yards and just one touchdown. Williams struggled with injuries of his own, as an injured throwing shoulder prevented him from lifting his arm past 90 degrees at times, according to UW coach Craig Bohl.

Williams’ forced sidewinding release made him look more major league baseball hall-of-famer rather than a quarterback.

“His delivery began to change,” Bohl said. “He started to have almost a, I don’t want to say Sandy Koufax release … but that was part of the problem. Within our passing tree, we really had to scale some things back, and we were really way off.”

Both Chambers and Williams are healthy this spring, and Polasek is working closely with them to improve their mechanics, particularly their footwork.

Chambers and Williams have had their solid moments in practice, Bohl said, but have also been inconsistent. Bohl plans to name a starting quarterback following the spring game May 8.

“Some days, one guy has a little bit of the edge over the other. But you know, we’ll reserve some judgment,” Bohl said.

More precise footwork by both quarterbacks will lead to more accurate ball placement. That, in turn, will get UW’s completion percentage to a more respectable mark.

“What we’re trying to really emphasize (is) getting those guys away from big steps, because they lead to big loops in their throwing action,” Polasek said.

The mechanical focus has been slightly different for each quarterback, though each is focused largely around their bases.

Williams’s throwing motion tended to cross his entire body last season, much like Bohl alluded to with Koufax’s three-quarter delivery. Upon further inspection of game tape, Polasek noticed Williams occasionally has issues with his front foot being out-of-line with his left shoulder when throwing, causing passes to be off-target. For Chambers, the key is keeping his balance when following through on throws.

The other main point of emphasis with the quarterbacks has been awareness in the pocket. The example Polasek used was Tampa Bay Buccaneers quarterback and seven-time Super Bowl champion Tom Brady.

Brady is lauded for his ability to manipulate the pocket and step into his throws by finding space behind his offensive linemen. That’s important, Polasek said, but the key is to not try and find space that isn’t needed. There’s no need to excessively step into defensive pressure if the throw can be made as is.

“(Brady) only takes what he has to take in there, so his feet are always underneath him,” Polasek said. “And that’s what we’re really trying to emphasize.”

The Cowboys held a scrimmage Saturday consisting of 94 plays or so, Bohl told reporters Monday.

Among the offensive standouts were sophomore tight end Treyton Welch, who Bohl said is “doing dynamic things,” redshirt freshman wide receiver Isaiah Neyor and sophomore running back Titus Swen. Swen opted out partway through the 2020 season but “did some things with the running game that we’re really pleased with,” Bohl said.

Not as positive was the play of the quarterbacks, according to Bohl. Chambers and Williams both took their lumps in the scrimmage.

“We’re inconsistent at quarterback. It was not one of our better days all the way through,” Bohl said. “We’re going to need to take a hard look and focus to get those guys playing better.”

Weinman no longer with team

Junior tight end Nate Weinman, who started four games in his UW career, is no longer with the football team and is just focusing on his UW degree, Bohl said. Weinman finished his career with four receptions, all coming in the 2020 season.

Freshman punter Ralph Fawaz, who has yet to attempt a punt in his collegiate career, “doesn’t have any competition right now,” Bohl said Tuesday. Last season’s punter, Cornell graduate transfer Nick Null, transferred from UW in the offseason.

Null averaged 38.7 yards per punt in 2020 and also handed kickoff duties. Bohl said it is “doubtful” Fawaz will do kickoffs as well.

“(Fawaz) actually punts better in the scrimmage and during live stuff than what he does in pre-practice,” Bohl said. “He’s been doing well, and right now he’s slated as our No. 1 punter.”