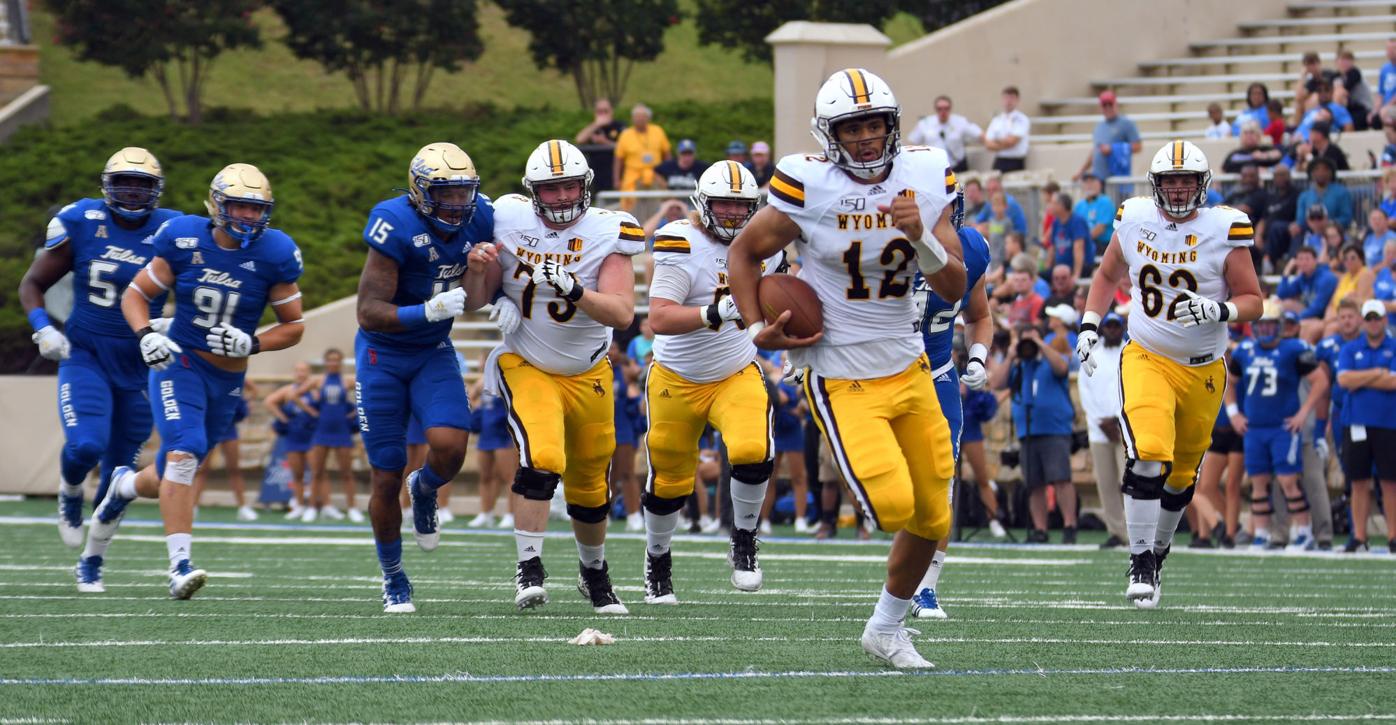 University of Wyoming quarterback Sean Chambers has suffered season ending injuries the previous three seasons. Chambers is currently on track to be ready at the start of the season. 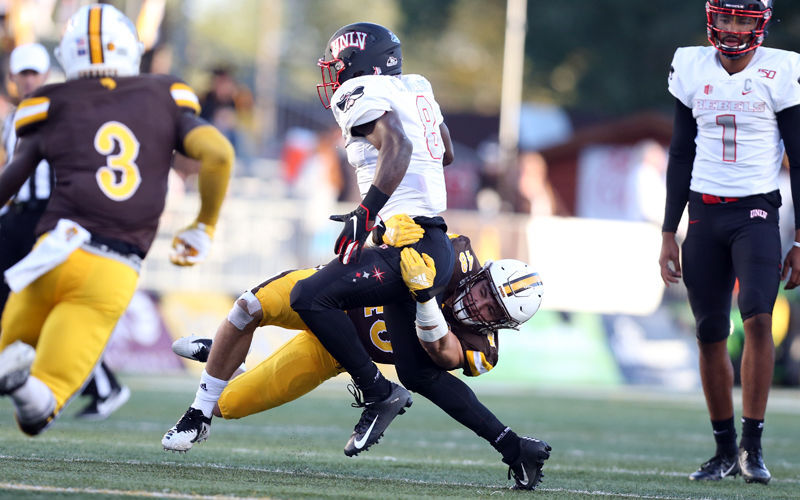 University of Wyoming linebacker Chad Muma was a main piece of the Cowboys’ defense last season. Muma will look to again lead a Cowboys defense that is returning all of its starters.

University of Wyoming quarterback Sean Chambers has suffered season ending injuries the previous three seasons. Chambers is currently on track to be ready at the start of the season.

University of Wyoming linebacker Chad Muma was a main piece of the Cowboys’ defense last season. Muma will look to again lead a Cowboys defense that is returning all of its starters.

Spring is in the air, and for the first time since 2019, it’s sharing the season with football.

A year ago, spring football practice for the University of Wyoming was canceled before it ever had a chance to get started due to the COVID-19 pandemic. We all know what happened after that – the season was on, then it was off, and then it was on again in shortened fashion.

It was a weird campaign all around for the Cowboys, who finished 2-6 in their Mountain West-only slate of games. UW entered the 2019 offseason with sky-high expectations following a 38-17 demolition of Georgia State in the Arizona Bowl, but admittedly failed to reach them.

The past is in the past, though, and it’s time to look toward the future. It’s one filled with promise for UW, which returns all of its starters on offense and defense, due, in part, to the NCAA’s decision to give all players (seniors included) an additional year of eligibility.

A full 12-game schedule is on the horizon, and all that preparation begins next week, as the Cowboys begin spring practice under eighth-year head coach Craig Bohl.

As always, questions abound this time of year, and this writer has a few of his own. But it’s nice to know we aren’t wondering whether we’ll have a season at all this spring.

1. What will the “re-engineered” offense look like under new offensive coordinator Tim Polasek?To say UW’s offense had its share of issues in 2020 would be an understatement. Things got off to a bad start when starting quarterback Sean Chambers broke his leg on the first drive of the season at Nevada. It was a hit the Cowboys never really recovered from, despite Levi Williams’ best efforts to get things on track.

As always, UW’s running game was strong, spearheaded by Xazavian Valladay and Trey Smith, both of whom return this season. The passing game was abysmal, however, as UW quarterbacks threw one total touchdown and have completed less than 50% of their passes each of the last three seasons. The play calling was also predictable at times; per CFBStats, UW ran the ball 74.4% of the time on first down and 68% on second down, leading to a passing percentage of 48.3% on third downs.

That play caller, longtime Bohl assistant Brent Vigen, is now the head coach at Montana State. Coincidentally, the Bobcats are UW’s first opponent come fall. Now running the offense is Polasek, most recently the offensive line coach at the University of Iowa and previously the offensive coordinator at North Dakota State.

Bohl has long talked about the need to reinvigorate the offense, but has also hammered home that the Pokes will remain run-dominant. Can the Cowboys find a balance of power running that also keeps defenses honest? It could be the biggest difference in how close UW comes to attaining its first Mountain West title.

2. How healthy is Chambers? Are he and Williams actually competing for the job?One of the biggest determining factors for how successful Polasek’s offense will be likely will come down to who lines up under center. Chambers is 8-3 as UW’s primary quarterback, and while his numbers as a passer have never jumped off the page (46.3% in completions for his career), his ability as a runner and his intangibles have long made him QB 1 in Bohl’s eyes.

Chambers has suffered season-ending injuries in each of his three seasons, however, and a massive jump in productivity has yet to occur. Williams started one game as a true freshman in 2019 (Arizona Bowl) and thrived, accounting for four total touchdowns. He took over following Chambers’ injury in 2020 and was wildly inconsistent, completing 49.6% of his passes, with a lone touchdown and three interceptions. He failed to throw for 100 yards in each of the team’s last three games, completing just 15 passes over that stretch.

A few weeks ago, Bohl said Chambers was on track to be ready for the season, but was not at full strength quite yet. Things change quickly, however, and his availability for spring practice will be something to keep an eye on. Bohl made it seem like Chambers won the starting job fairly handily last fall, and it will be interesting to see if that holds serve once again.

3. What are the next steps for the defense under Jay Sawvel?

Given the fact he didn’t get much of an offseason with his players, Sawvel did an admirable job in his first season leading the Cowboys’ defense, surrendering 21 points per game, ranking 24th nationally. UW was equally stout against the run and pass (21st and 29th nationally in yards per game allowed, respectively). The defense accomplished all of this without the services of several key players, including starting safety Rome Weber and starting defensive linemen Solomon Byrd and Mario Mora, all of whom opted out of the season due to the pandemic.

The defense figures to only get better with everyone, including the aforementioned opt-outs, coming back. Chad Muma became a superstar at linebacker and will lead a defense that could be among the best in the Mountain West this fall.

Where can the group improve, then? Consistency on the back end wouldn’t hurt; in its two wins, Wyoming didn’t surrender a single touchdown pass. In four losses, the Cowboys surrendered eight touchdown passes. Five of those were on deep passes of at least 25 yards.

Keeping things in front of them and not allowing the long ball is a reasonable next step for the group.

4. How big of an impact will the players who opted out have? And where do they fit in after missing a season?

A number of players opted out of UW’s 2020 campaign: in addition to Weber, Byrd and Mora were defensive lineman Claude Cole and running back Titus Swen, who opted out a few weeks into the season after being placed in COVID-19 protocols early.

At safety, Braden Smith and Esaias Gandy both opted to come back for another season. How does Weber fit into the game plan? Will there be a rotation? Will Weber get his starting spot back? The same can be asked at defensive tackle, as Jordan Bertagnole was a revelation up the middle, despite being an undersized walk-on. Is there an odd man out between them and Cole Godbout? If Ravontae Holt is healed from his knee injury, does he take reps away from someone?

Swen’s situation is interesting, as well. Carries might be hard to come by for the talented tailback from Texas, given Valladay and Smith’s returns. Dawaian McNeely was the third runner last season, and he is also back. Realistically, someone has to lose touches.

5. Are COVID-19 protocols still going to be in place?

There is still the unfortunate reality that the pandemic isn’t over, though the end is in sight. Will War Memorial Stadium be at full capacity come fall? How about for May’s spring game? Will players and coaches still be wearing masks and distancing during workouts? Will they still be tested for COVID-19 in the spring and going forward? Will the team get vaccinated?

We will probably learn the answers to these questions as the off-season rolls on, but given the current circumstances, it’s reasonable to wonder how close to “normal” we truly are. My fingers are crossed that “normal” is coming sooner, rather than later.