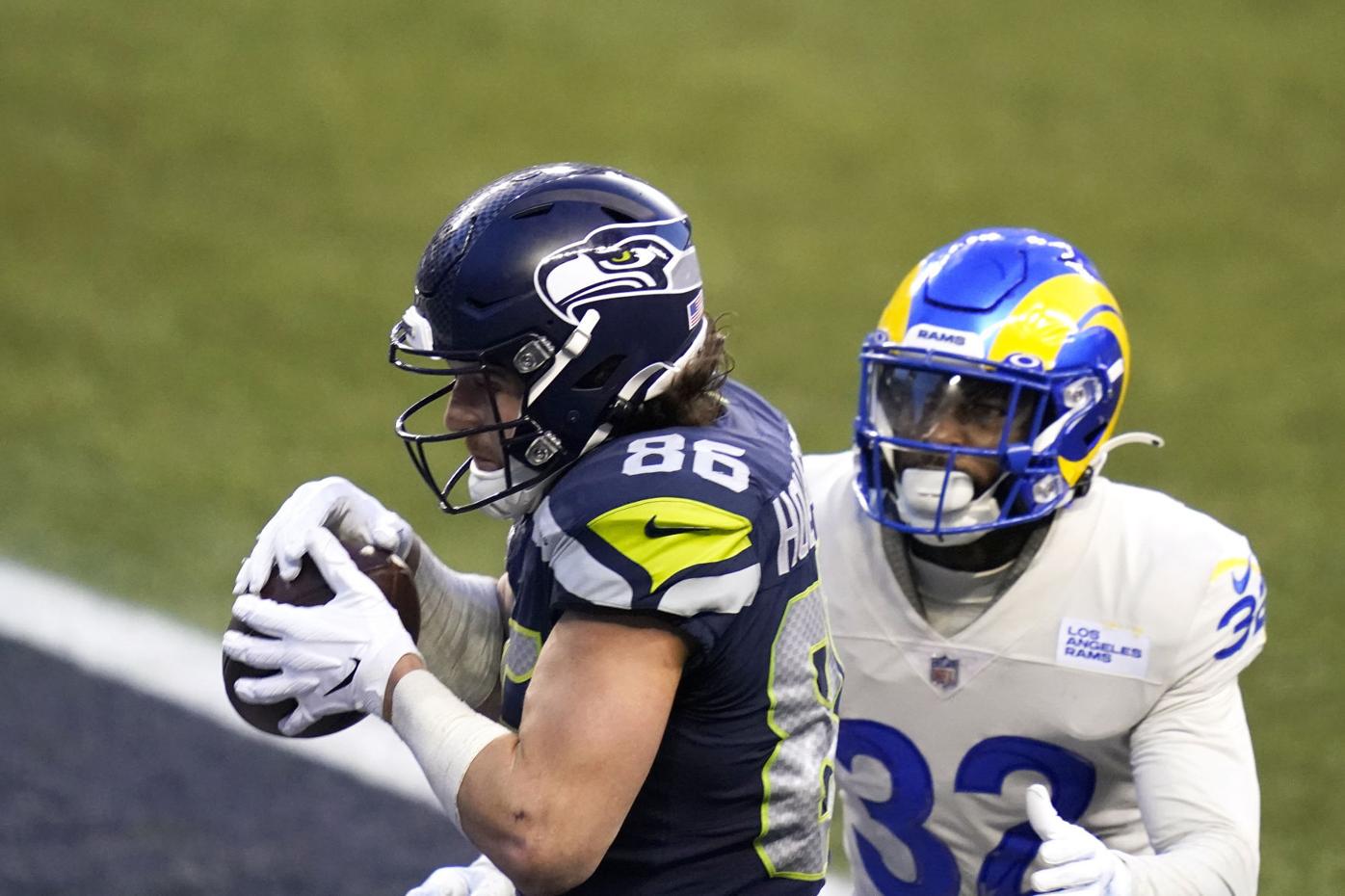 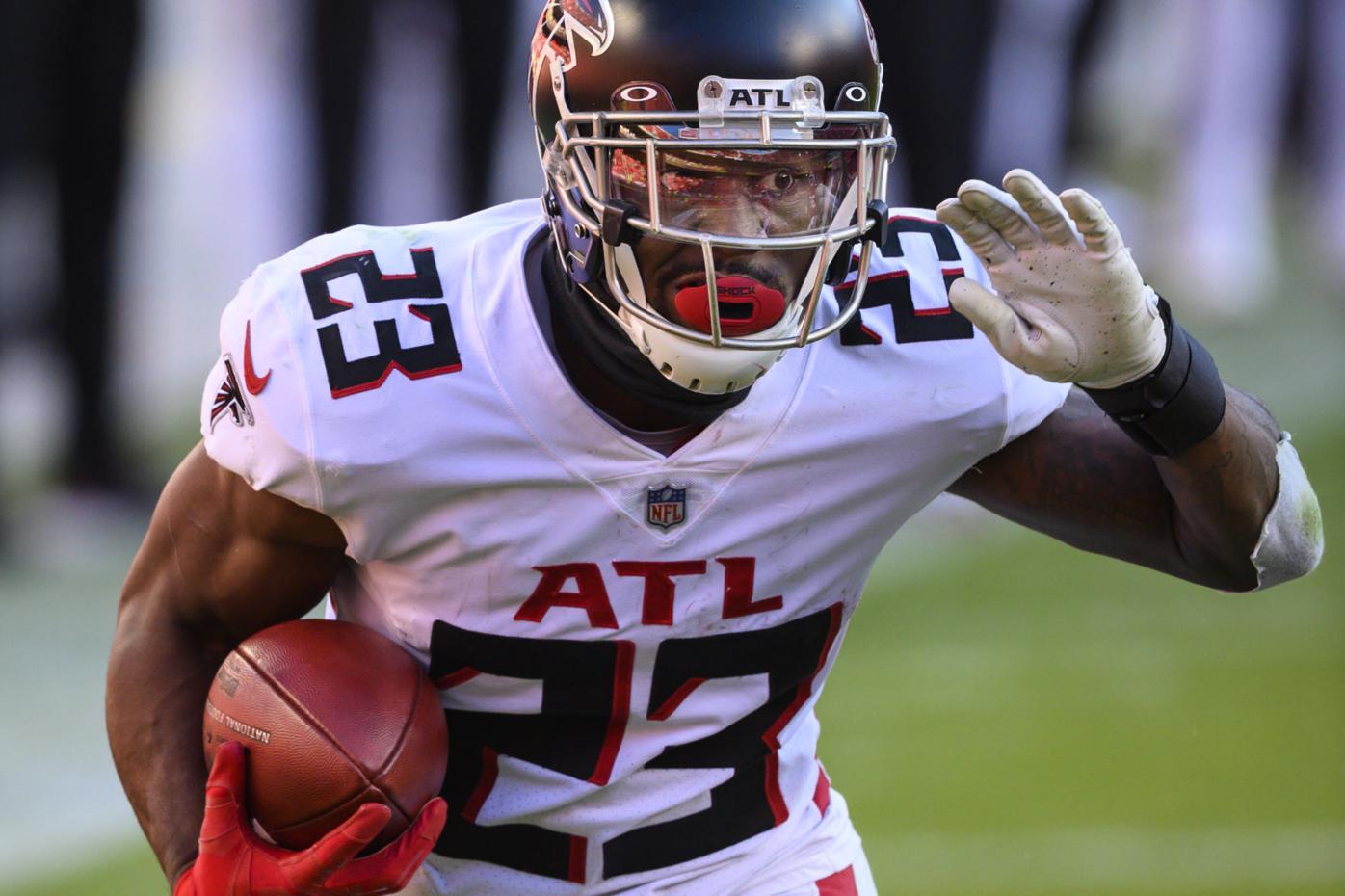 Atlanta Falcons running back Brian Hill (23) during the second half of an NFL football game against the Kansas City Chiefs, Sunday, Dec. 27, 2020, in Kansas City, Mo. (AP Photo/Reed Hoffmann) 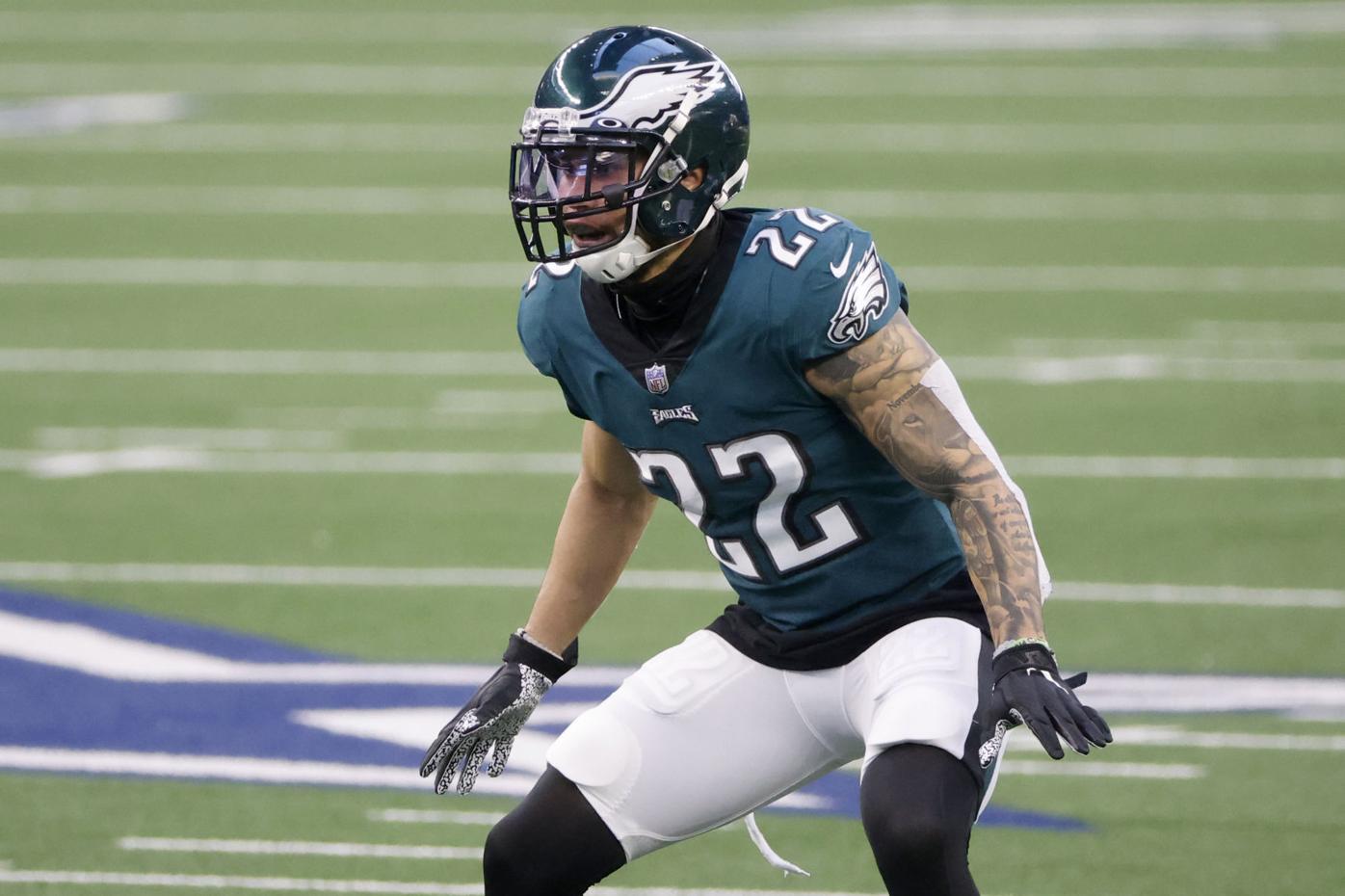 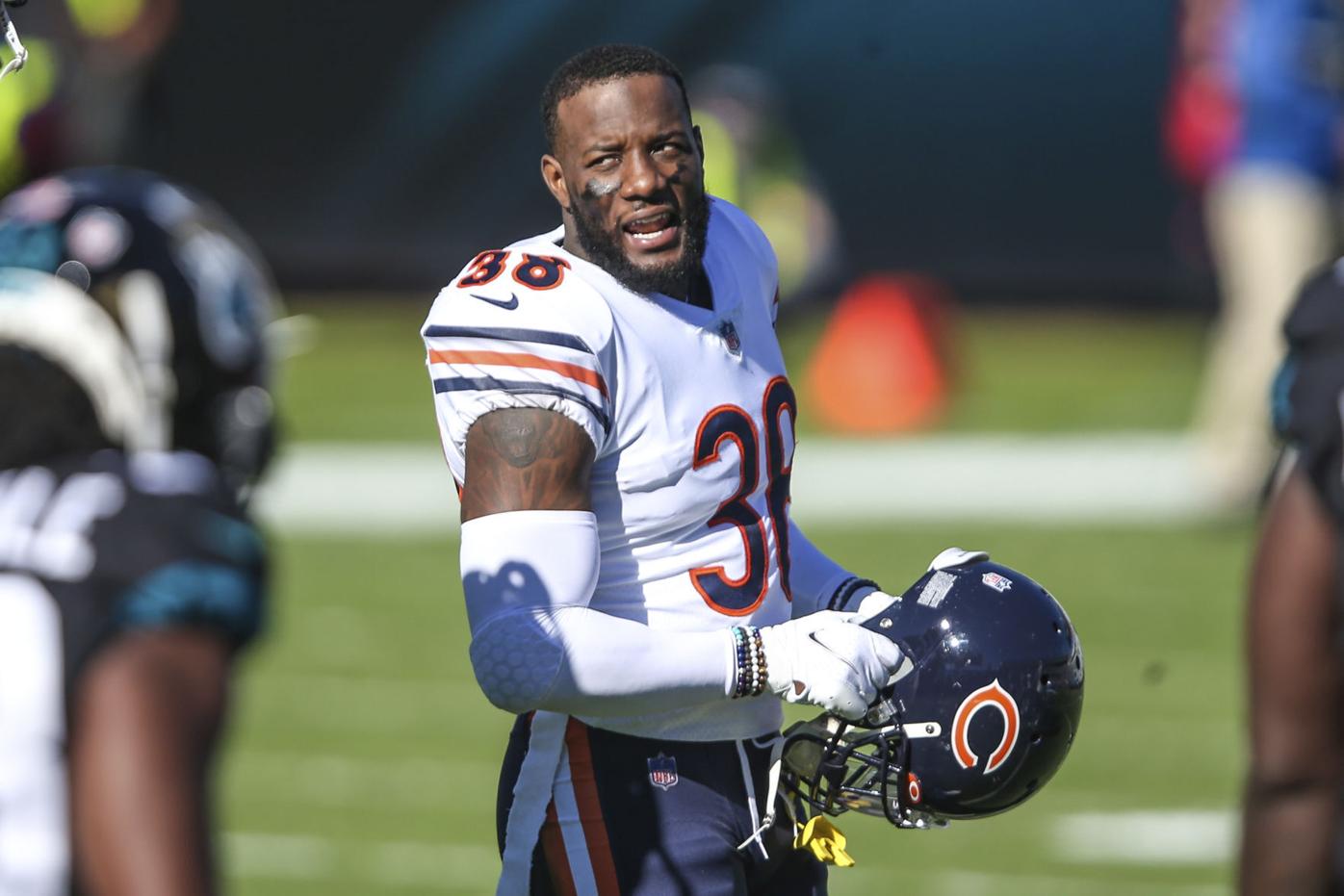 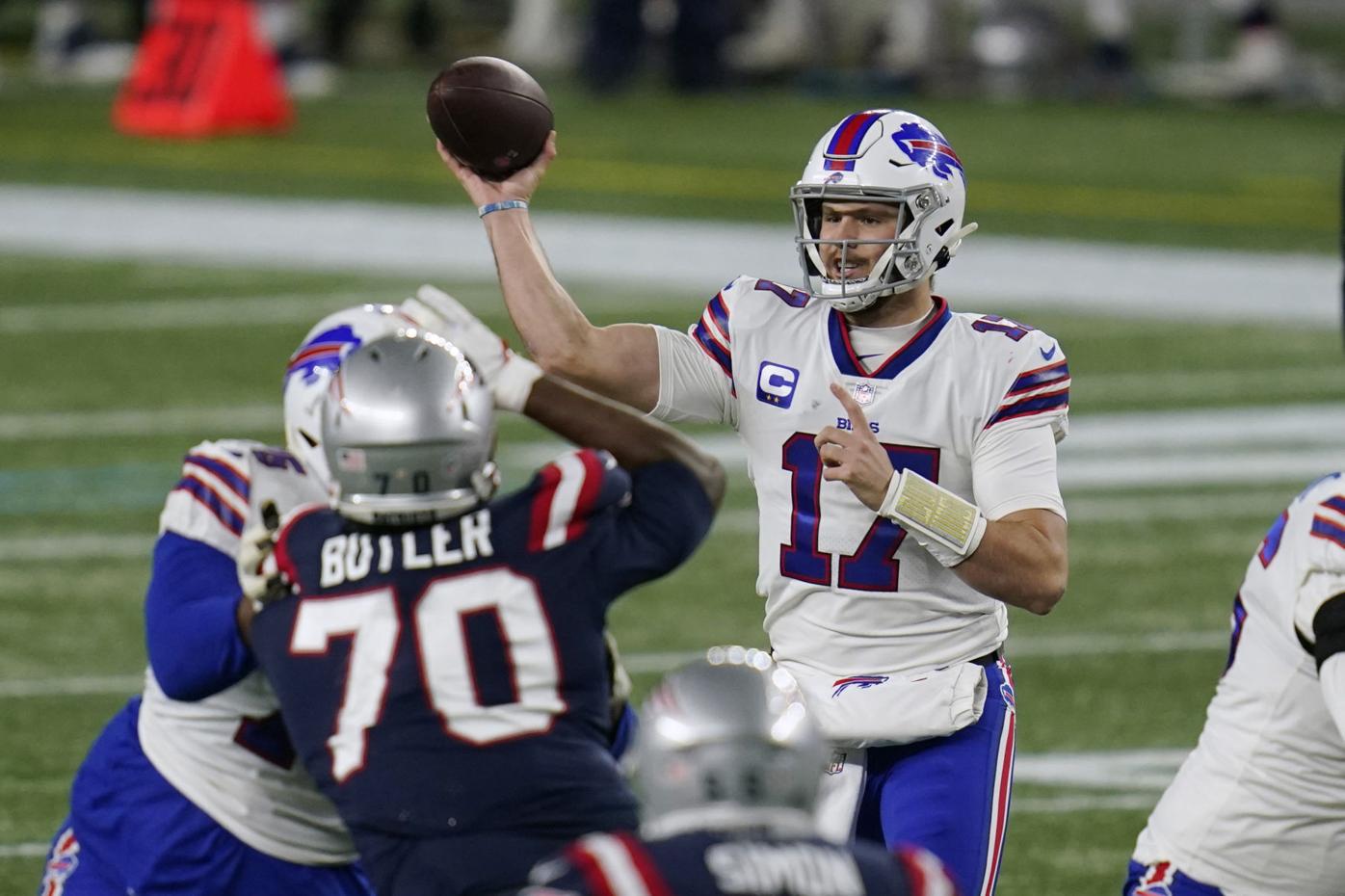 Atlanta Falcons running back Brian Hill (23) during the second half of an NFL football game against the Kansas City Chiefs, Sunday, Dec. 27, 2020, in Kansas City, Mo. (AP Photo/Reed Hoffmann)

Josh Allen, Buffalo Bills: The third-year quarterback completed 27 of 36 passes for 320 yards and four touchdowns during Buffalo’s 38-9 victory at New England. He also rushed for 35 yards on four carries. Allen was not sacked, and played 57 offensive snaps (79%).

The 6-foot-5, 237-pounder has completed 378 of 547 passes (69.1%) for 4,320 yards and 34 touchdowns and nine interceptions. His 34 touchdown passes are a single-season record for Buffalo. He needs 40 yards in the regular-season finale to pass Drew Bledsoe for the single-season yardage mark.

Allen also has rushed for 418 yards and eight touchdowns on 100 carries.

Marcus Epps, Philadelphia Eagles: The second-year safety started and tallied seven defensive tackles (six solo) and a special teams tackle during the Eagles’ 37-17 loss at Dallas. He suffered an injury during the first quarter, but returned.

The 6-foot, 191-pounder has 41 tackles (31 solo), an interception and three pass breakups through 13 games this season.

Gafford has not had a reception in the three games he has played in this season.

Tashaun Gipson, Chicago Bears: The free safety started and recorded a solo tackle during the Bears’ 41-17 victory at Jacksonville on Sunday. Gipson played 44 snaps on defense (80%).

The 6-foot-1, 209-pounder has 61 tackles (45 solo), five passes defensed and two interceptions through 14 games this season.

Carl Granderson, New Orleans Saints: The second-year defensive lineman had a solo tackle and a quarterback hit during the Saints' 52-33 victory over visiting Minnesota on Friday. Granderson also was flagged for roughing the passer. He played 38 defensive snaps (59%) and four on special teams (13%).

Tyler Hall, Atlanta Falcons: The rookie cornerback had a solo tackle on special teams during the Falcons’ 17-14 loss at Kansas City. He played 13 snaps (59%) on special teams.

Hall has played in nine games this season, recording two tackles on defense and four on special teams.

Brian Hill, Atlanta Falcons: The running back gained 36 yards on seven carries during Atlanta’s 17-14 loss at Kansas City. He also caught three passes for 25 yards and had a solo tackle on special teams.

Jacob Hollister, Seattle Seahawks: The tight end caught two of the six passes he was targeted with for gains of 17 yards, including a 13-yard touchdown during Seattle’s 20-9 win over the visiting Los Angeles Rams. Hollister also had an assisted tackle on special teams.

Hollister has 24 catches for 203 yards and three touchdowns in 15 games this season. He also has three assisted tackles on special teams.

He has not recorded any statistics in eight games this season.

Mark Nzeocha, San Francisco 49ers: The linebacker had a solo tackle on the opening kickoff during the 49ers' 20-12 victory Saturday at Arizona. He played 16 snaps on special teams (67%).

Nzeocha has played in four games for San Francisco this season, and has posted one tackle.

Mike Purcell, Denver Broncos: The nose tackle will miss the rest of the season after having surgery to repair a Lisfranc fracture in his right foot. The 6-foot-3, 328-pounder posted 13 tackles (nine solo) and a sack during six games this season.

Wilson has 33 tackles (23 solo), three pass breakups, two interceptions and a sack in 12 games this season.

Andrew Wingard, Jacksonville Jaguars: The second-year safety had four tackles on defense (three solo) and two on special teams (one solo) during the Jaguars’ 41-17 loss to visiting Chicago on Sunday. Wingard also took a direct snap on a fake punt attempt and rushed for a gain of nine yards and a first down, but the play was nullified by holding.

The 6-foot, 209-pounder has 42 tackles (28 solo), four passes defensed, an interception and a fumble recovery in 12 games this season.

Eddie Yarbrough, Minnesota Vikings: The defensive lineman had two solo tackles during the Vikings’ 52-33 loss Friday at New Orleans. He played 18 snaps on defense (24%) and 13 on special teams (42%).

Yarbrough has seven tackles (five solo) and a quarterback hit in the three games he has played in this season.