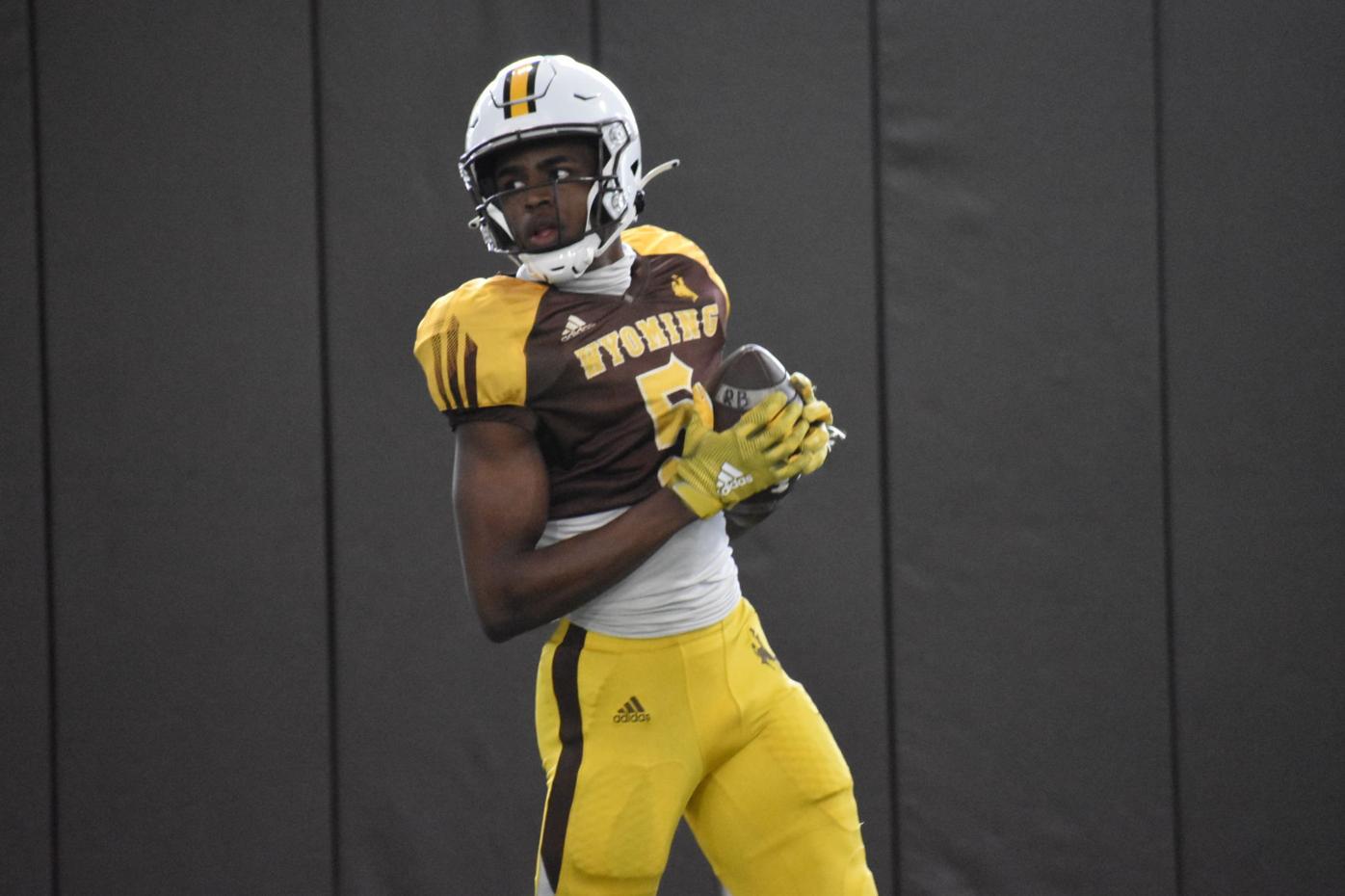 Isaiah Neyor’s role at wide receiver is one of the few expected offensive certainties for the University of Wyoming heading into today’s Spring Game. UW/courtesy 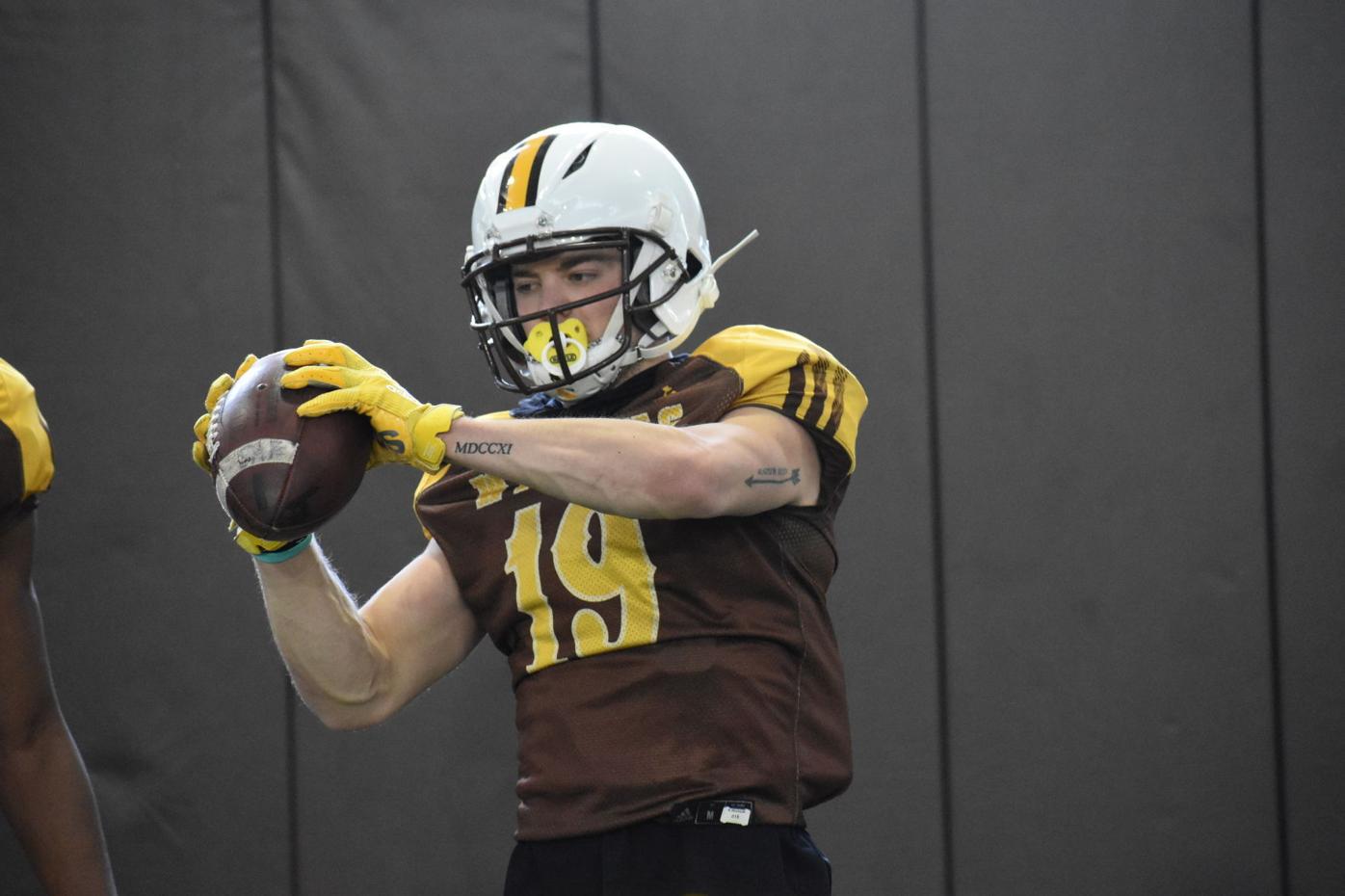 Ayden Eberhardt’s role at wide receiver is one of the few expected offensive certainties for the University of Wyoming heading into today’s Spring Game. UW/courtesy 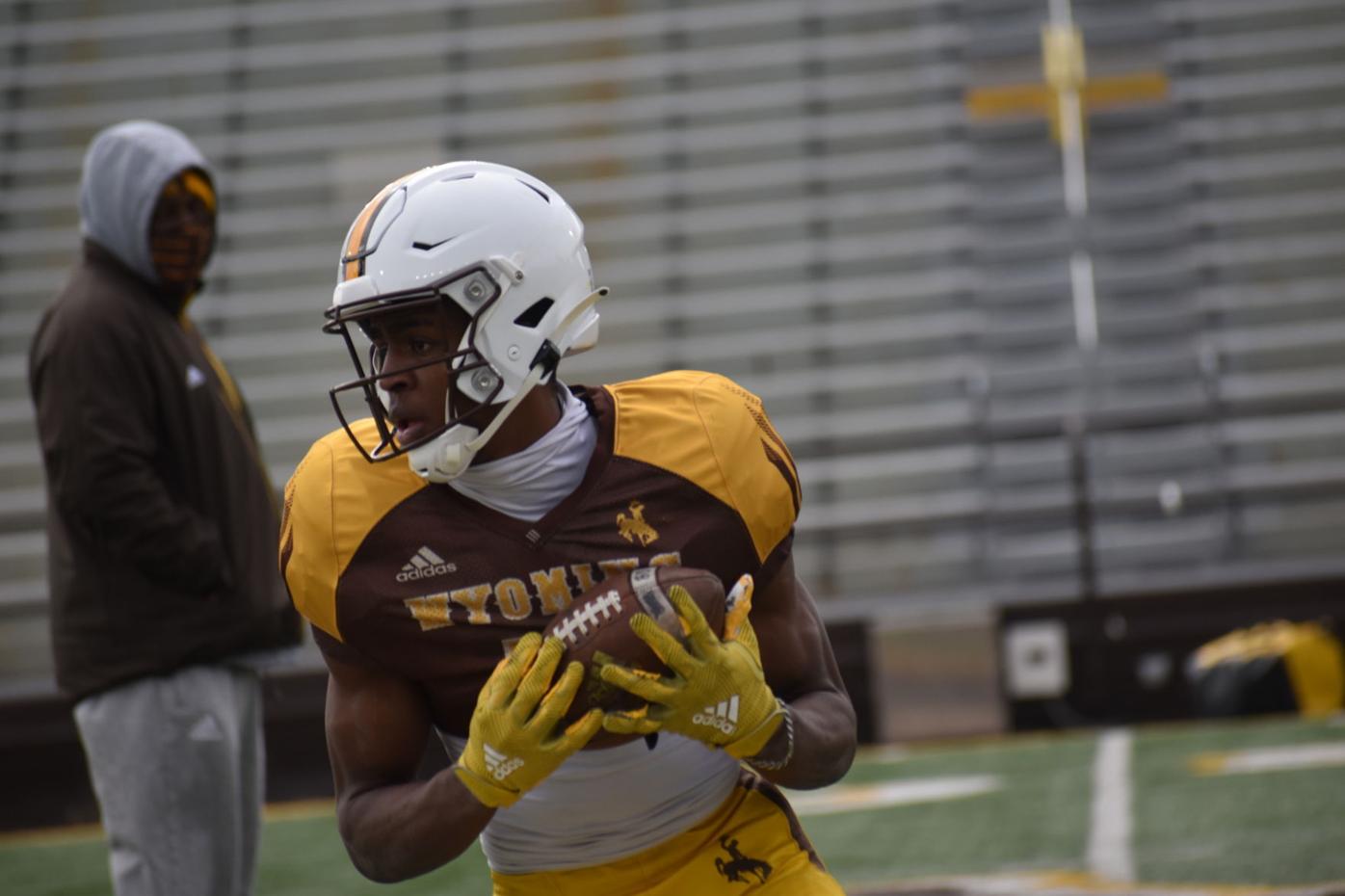 Isaiah Neyor’s role at wide receiver is one of the few expected offensive certainties for the University of Wyoming heading into today’s Spring Game. UW/Courtesy

Isaiah Neyor’s role at wide receiver is one of the few expected offensive certainties for the University of Wyoming heading into today’s Spring Game. UW/courtesy

Ayden Eberhardt’s role at wide receiver is one of the few expected offensive certainties for the University of Wyoming heading into today’s Spring Game. UW/courtesy

Isaiah Neyor’s role at wide receiver is one of the few expected offensive certainties for the University of Wyoming heading into today’s Spring Game. UW/Courtesy

LARAMIE – Don’t expect any strange scoring system in today’s Brown and Gold game. As University of Wyoming coach Craig Bohl says, he and the Cowboys are treating it as any other, regular game day. First downs are first downs, touchdowns are touchdowns, and fans are encouraged to be loud.

Due to COVID-19 regulations, there was no tailgating outside the stadium last fall, and social distancing forced lighter attendance. Those restrictions are gone, as are mask mandates for fans, though social distancing is being encouraged.

“It’s an opportunity to get back to doing some normal things. And all the arrows are pointing up,” Bohl said. “It’s going to be a game-like atmosphere. Even the horse is going to be at the game.”

While the game figures to be a joyous event for the players and fans, there are football-related questions to be asked and, hopefully, answers to be found.

1. Will we see a clear winner in the quarterback derby?

The question on nearly everyone’s mind involves who will be the first man to line up under center on Sept. 4 against Montana State: redshirt sophomore Sean Chambers or redshirt freshman Levi Williams? Chambers was named the starting quarterback last fall, but broke his leg on the first drive of the season at Nevada. Williams played nearly all of the remaining snaps, but was plagued by inconsistency and an injury to his throwing shoulder that admittedly halted his progress.

Williams suffered the injury against Hawaii, he said, and it was “out of place” the rest of the season. He also says he lost confidence during the season. Williams’ shoulder did not require surgery, however, and he feels he has as good a shot as Chambers does of taking the reins of new offensive coordinator Tim Polasek’s system.

If it seems like there is always a quarterback competition at UW, it’s because there usually is. The position has been relatively unsettled since Josh Allen left for the NFL following the 2017 season. Competition isn’t a bad thing, however, no matter how many times Chambers has been through it.

Don’t be shocked if UW’s offensive approach today looks vanilla. Most coaches don’t give away the cupboard in the spring game, though Bohl said each team will be able to use one trick play during the contest.

Polasek, most recently the offensive line coach at the University of Iowa and previously the offensive coordinator at North Dakota State, has spent much of spring helping Chambers and Williams clean up their mechanics. He has also said the Cowboys are still going to rely heavily on the run, but will look to open things up in the passing game by way of play-action.

While the offensive emphasis might look similar, that doesn’t mean it has been an easy transition for players from former offensive coordinator Brent Vigen’s system. When asked about the new playbook and whether it had been a seamless transition, Williams laughed before answering in earnest.

“Seamless? No. It’s definitely similar, but different,” Williams said. “There’s a whole new energy. But I think the biggest thing to take away is the guys are excited to learn about it. The guys are really buying in.”

“Energy” has been a key word all spring, with players on both sides of the ball noting the difference in intensity the offense has shown under the tireless Polasek. Will that be evident Saturday? Only time will tell.

3. Who is going to step up at receiver?

If it seems like all of these questions involve UW’s offense, it’s because the Cowboys’ defense doesn’t really have many holes to fill. Every level of the defense is filled with productive players who helped the unit rank in the top 25 in scoring defense under Jay Sawvel last season. The same cannot be said on the other side of the ball, though, as last season’s leading receiver (redshirt senior Ayden Eberhardt) caught 16 passes for 252 yards. Redshirt freshman Isaiah Neyor averaged 31 yards a catch in 2020, but only caught eight passes. He nonetheless was an All-Mountain West honorable mention selection, despite limited opportunities.

Outside of Eberhardt and Neyor, however, are a number of unknowns. Dontae Crow, who started all six games last season, has transferred. Sophomore tight end Treyton Welch has been a star during spring practice, Bohl said, but he only caught five passes in 2020. Junior receiver Gunner Gentry, who caught the team’s lone touchdown pass last year, will be out for the foreseeable future with a knee injury.

There are a lot of young receiving options for Chambers and Williams to choose from: redshirt freshmen Devin Jennings and Alex Brown and freshman Joshua Cobbs are all breakout candidates. Which ones step up to the plate, however, remains somewhat of a mystery.

4. How is the eventual depth chart going to sort itself out?

Other than the quarterback quandary, the other particularly interesting thing to monitor is what the team’s first depth chart will look like. Bohl said it will likely be released shortly after the spring game. While UW returns all of its starters from a season ago, no job is set in stone. That is particularly true of the players who opted out of the 2020 season, who have essentially had to start from scratch this offseason.

It has not always been pretty. Redshirt sophomore safety Rome Weber, who started 12 games in 2019, has looked “OK” at practice. At the moment, he is behind redshirt senior safety Braden Smith, who started all six games in 2020. Redshirt sophomore defensive end Solomon Byrd, the team’s leader in sacks in 2019, will likely not be atop the team’s first depth chart, Bohl said.

Conversely, the opt-outs having to make up ground has led to some pleasant surprises, such as redshirt freshman defensive end DeVonne Harris. Harris has been a standout, Bohl said, and has likely earned himself playing time.

“I wouldn’t say frustration (with the opt-outs being behind). I had some concerns about that,” Bohl said. “We did say it was going to be competitive this spring, and we were going to go out and evaluate and play the best guys … And so, the cream’s risen to the top.”

Another battle to watch is for the SAM linebacker spot, where redshirt sophomore Chuck Hicks and redshirt freshman Easton Gibbs are battling. Hicks is slightly ahead, partially due to his experience, Bohl said, but both are going to see significant time come fall.

Lastly, keep an eye on the offensive line. UW has a ton of players who have started games, particularly at tackle with senior Alonzo Velazquez, redshirt junior Rudy Stofer, redshirt sophomore Frank Crum and redshirt freshman Latrell Bible, who is back on the interior line. Bohl told reporters earlier in the week that Velazquez and Crum were the leaders at the tackle spots, but it’s worth monitoring in the coming weeks and months.