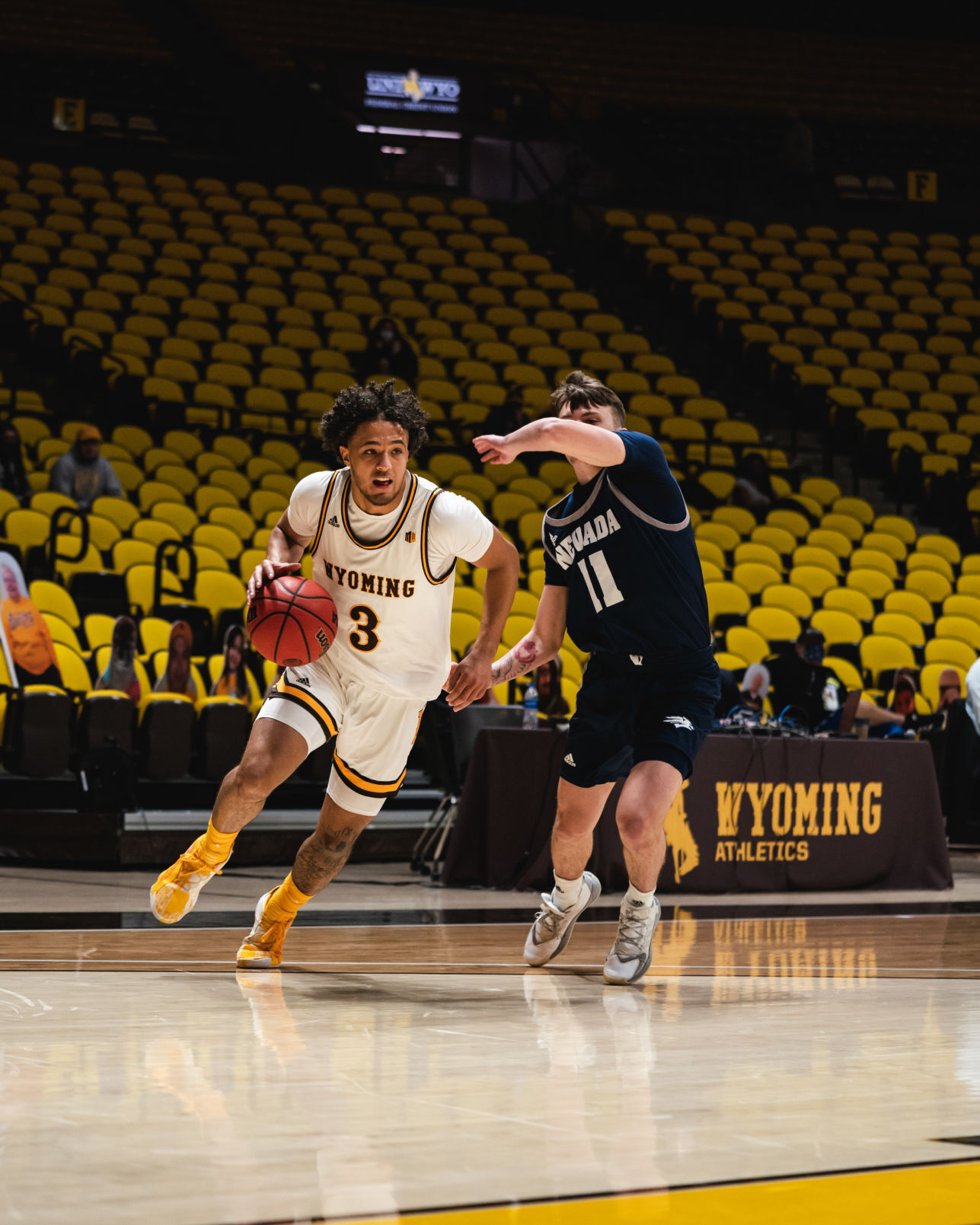 University of Wyoming sophomore guard Kwane Marble II, left, drives to the basket during the Cowboys’ 71-64 victory over visiting Nevada on Friday, Jan. 22, 2021, at Arena-Auditorium in Laramie. Tyler Davis/UW 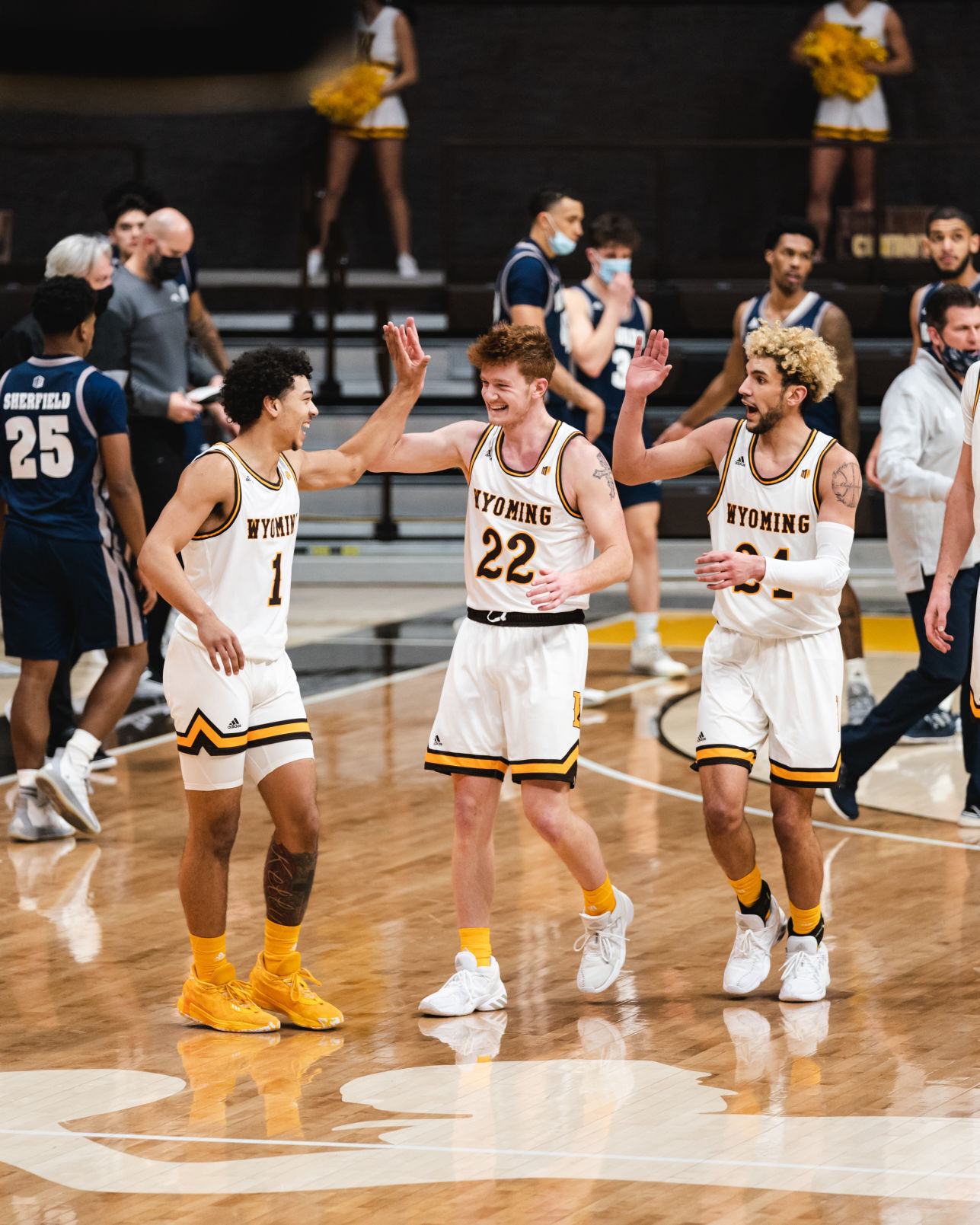 University of Wyoming sophomore guard Kwane Marble II, left, drives to the basket during the Cowboys’ 71-64 victory over visiting Nevada on Friday, Jan. 22, 2021, at Arena-Auditorium in Laramie. Tyler Davis/UW

LARAMIE – History has a funny way of repeating itself. And if it had happened once more, University of Wyoming men’s basketball coach Jeff Linder might have found a few more grey hairs on his head come this morning.

The Cowboys, less than a week removed from blowing a 14-point second-half lead at Air Force, found themselves in a familiar situation against one of the Mountain West’s best Friday at Arena-Auditorium.

Nevada, squarely in the hunt for the conference title, trailed by 20 just a few minutes into the second half. UW was firing on all cylinders, having held a Wolf Pack team boasting dynamic scorers to just 21 first half points.

Then, as happened at Air Force and in the second game of the season against Texas Southern, a game UW led by 21 points in the second half, what looked to be a sure UW win turned into a championship boxing match.

Nevada went on a 28-7 run in the second half to take a lead over a UW team that, just minutes earlier, was in complete control. Once again, the sky appeared to be falling.

Unlike those games against Air Force and Texas Southern, however, the Cowboys had an answer Friday night. They came together.

The Cowboys finished the game on a 21-14 run and held off a pesky Nevada squad 71-64 in a thriller. It was a strange, stressful and yet empowering experience for all involved.

“Man, in coaching you age in dog years, especially when you have a 20-point lead and see it evaporate,” Linder said. “Down the stretch, Marcus (Williams), Kwane (Marble II) stepped up and made big free throws to just kind of keep them arm’s distance, where it never really became a one possession game.”

Williams made all six of his free throws over the final 1 minute, 30 seconds of game action to seal one of the most emotional and tumultuous wins of the season.

After a few attempts that came up agonizingly short, the script had officially been flipped: UW (9-5 overall, 3-4 Mountain West) responded to potential heartbreak.

The Cowboys led by 12 points at halftime and scored the first eight of the second half. Linder has long said that, when at their best, his teams do two things well: they defend the 3-point line and are lethal from behind it. Both were true in the early portions Friday .

The Cowboys attempted a whopping 20 3-pointers in the first half, nailing eight of them, and surrendered just 2 of 11 shooting from deep to the Wolf Pack. Fresh off a strong pair of outings at Air Force, freshman guard Xavier DuSell’s hot play continued, as the Arizona native hit 3 of 4 shots from deep and scored 11 first half points.

Just three minutes into the second half, though, Nevada found its groove in the form of guards Desmond Cambridge and Grant Sherfield and forward Warren Washington, who helped spearhead the Wolf Pack’s epic second half run.

Over a 10 minute, 30 second stretch, UW went just 3 of 16 from the field. Over that time period, Cambridge and Washington scored a combined 21 points, the final two coming in the form of an emphatic Washington dunk off a UW turnover that put Nevada up by a point.

“We played really good defense in the first half. Second half, we started very well. I think we became content with our defense and thought we didn’t have to play as hard,” Marble said.

What happened next for the Cowboys, though, was one of those “come to Jesus” moments Linder has often found himself looking for with his young team.

Having just surrendered a massive lead, Williams took the ball on the other end and drove down the baseline. He answered Washington’s dunk with a slam of his own that got everyone on the UW sideline on their feet.

Williams got tangled up with a Nevada player, and the former was called for a technical foul for shoving after the aforementioned dunk. Nevada turned around and made a free throw to tie the game back up.

But UW didn’t look at the series of events as a step back to square one. That dunk and technical were the springboard for the final bit of magic the youthful Cowboys had up their sleeve.

“From that point on, you could just kind of see our guys (respond),” Linder said.

UW went on a 9-0 run, including five consecutive points from Foster. Once again, Nevada didn’t make things easy, cutting the deficit back to five with just over two minutes to play.

Williams, along with Marble, answered the bell late with the game on the line, hitting all eight of their free throws down the stretch to secure one of the biggest wins of the young season for the Cowboys.

Williams scored 11 of his 13 points in the second half. Foster, Marble and Williams combined for 30 of UW’s 38 second half points.

“Marcus is one hell of a player. I love that guy to death,” said Foster, who tied Marble with a team-high 15 points. “I love having him on my team. I’d hate to go against him.”

In the recent days following that heartbreaking loss at Air Force, Linder sensed the mood of his young team change drastically. Voices that didn’t typically know when to speak up, specifically redshirt junior forward Hunter Thompson, made their thoughts heard. There were lessons to be learned from devastating defeat. It was up to players to dig deep and discover them.

On Friday, the Cowboys dug deeper than they ever had.

New statewide public health orders related to the COVID-19 pandemic mean a maximum of 2,000 fans will be allowed at University of Wyoming athl…