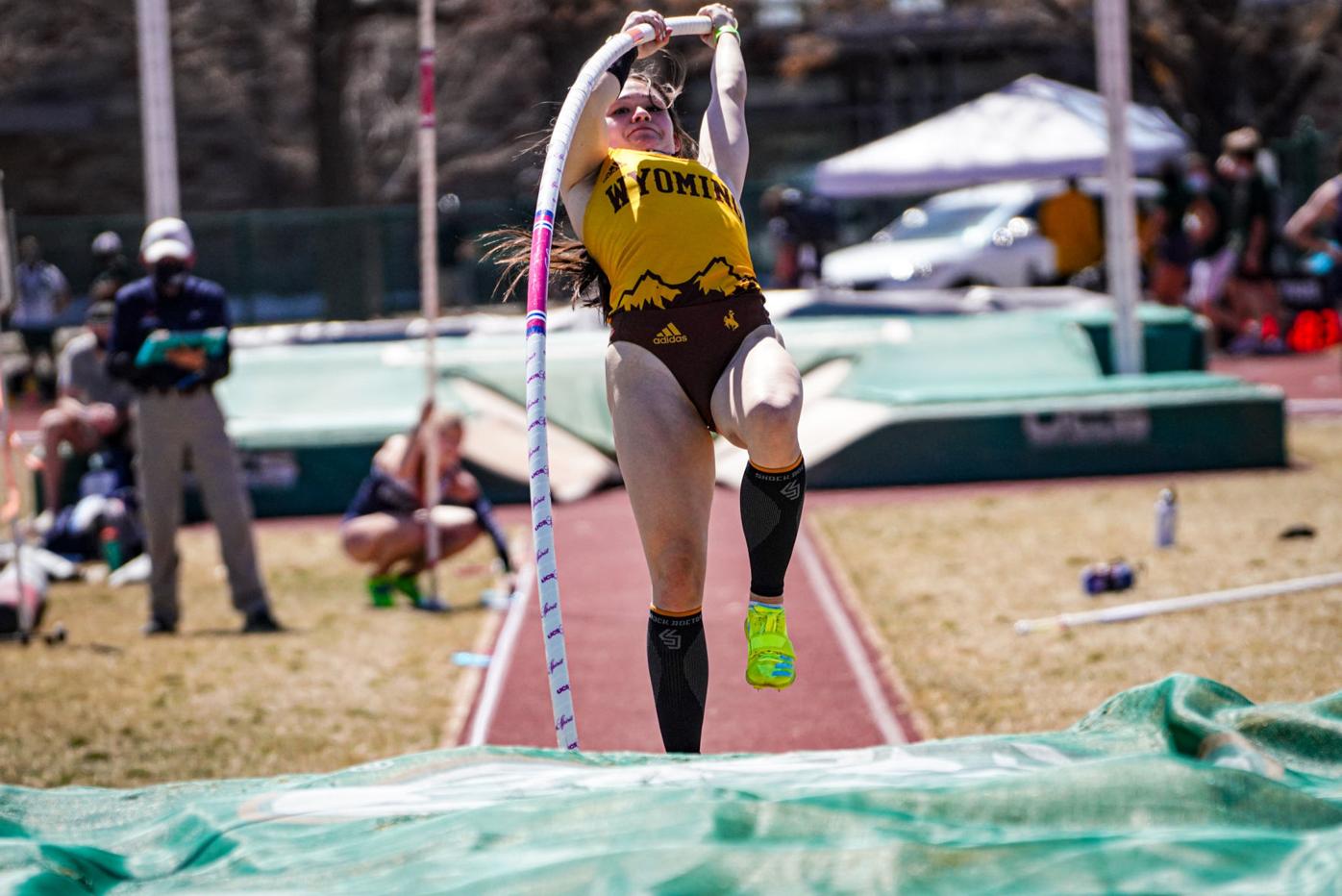 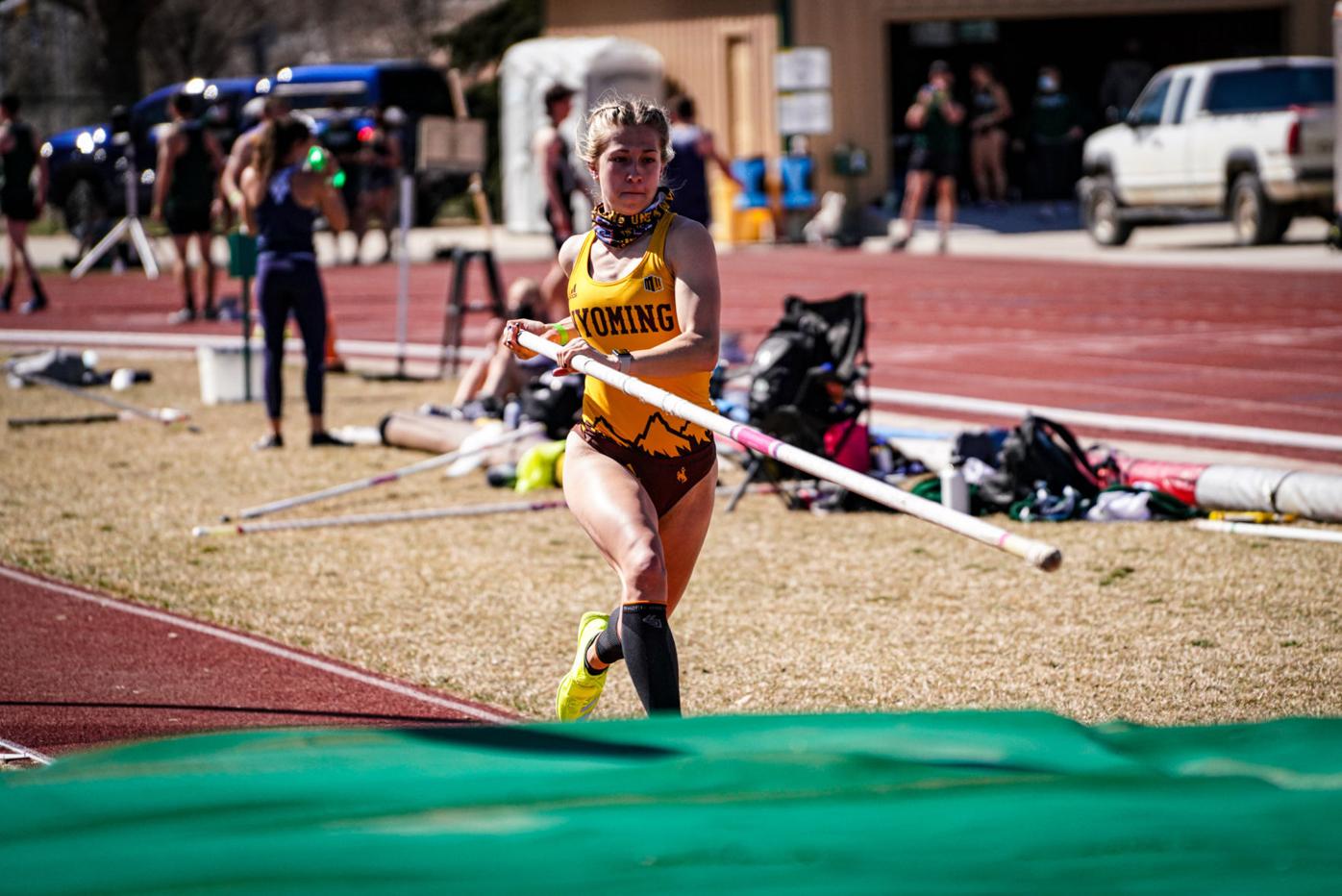 LARAMIE – If not for a chance meeting in an on-campus elevator, Kayla Stibley is fully aware she wouldn’t have her name etched into the University of Wyoming’s track and field record books. If she’s being completely honest, she had no idea her home-state university even had a women’s pole vaulting program.

Stibley is a freshman from Casper, a little more than a two-hour drive from UW. She started pole vaulting when she was in middle school. Her mother was a gymnastics instructor, and though Stibley herself wasn’t a gymnast, she had enough of a background in it that pole vaulting seemed like a logical step to take.

Stibley placed third in pole vault at the 2019 Class 4A Wyoming state championships as a senior at Natrona County High. But when it came time to look for college programs to potentially compete at, none of them tickled her fancy. So, she chose to stay home and attend UW as a regular student.

One day, future UW track teammate Madison Friend shared an elevator ride with Stibley. Friend, also from Wyoming, knew Stibley’s background and told her she should email the coaching staff about vaulting for the program.

Stibley was taken aback. Not by the ease with which connecting with a coach was possible, but by the fact UW had pole vaulters.

“I really wanted to pole vault, but I didn’t know of any pole vaulters,” Stibley said. “That’s why I didn’t reach out to them.”

Fast forward about two years, and Stibley already owns the school record in outdoor pole vault at 12 feet, 3 inches. UW’s top-ten list in the event is littered largely with names from nearly two decades ago. Sticking out like a sore thumb are Stibley and true freshman teammate Aubry Sanchez, who already ranks eighth all-time in outdoor vaulting. Stibley and Sanchez also rank second and tied for sixth, respectively, in school history in indoor vaulting on a list largely filled with names from the mid-2000s.

Why are there so few records between 2005 and 2020 in women’s pole vault? And why has the event come back with a vengeance in recent years? An added emphasis has been placed on vaulting because UW realizes it has the peripheral pieces to excel in it once again.

“It hasn’t been an event that we have sponsored in the last while, mainly because of the economics of it and us trying to be fiscally responsible,” UW jumps coach Quincy Howe said. “It’s an event area we kind of made a decision to delve into in the state.”

For the uninitiated, the world of track can be a little confusing. But the best way to look at it is this: at a given meet, each athlete participating in an event is eligible to earn points toward the team’s overall score. The more events you have athletes competing in, the higher the likelihood of earning points. The more points, the better chance a team has of placing.

Not all events are created equal, however. A program generally can’t be good at everything. Because of that, resources tend to go toward events that are more likely to produce positive results. As Howe says, you’re “not trying to have participants.” You want to win.

If prospective recruits excel in other events, it isn’t worthwhile to allocate as many resources toward events where there is less trajectory for growth.

“Do we use our budget to buy one pole,” Howe posits. “Or do we use our money to buy eight pairs of shoes?”

That mindset began to shift in recent years, however, when UW started recruiting decathletes. Pole vault is, of course, one of the ten events. When those athletes began coming to campus, the program started thinking that perhaps looking deeper into pole vault itself could prove useful.

What also started changing was the quality of local pole vaulting athletes and the rise in the sheer number of vaulters. When the WHSAA sanctioned indoor track in 2006, it provided more opportunities for young athletes to try the event. Pole vault was getting more exposure, Howe said, and led to more participants.

Sanchez, who prepped at Laramie High and spent her high school years battling Stibley head-to-head, knew she wanted to stay in-town for college. Like Stibley, Sanchez wasn’t sure if UW even had jump coaches or jumpers.

The quality of competition within the state from her freshman year to senior season of high school improved dramatically, said Sanchez, who won the indoor started title as a junior and finished in second at the 2018 and 2019 4A state outdoor track meets.

The 4A state champion in girl’s pole vault in the last WHSAA outdoor state meet in 2019 cleared 11-6. In 2015, that number was exactly a foot lower.

To score points in the Mountain West, women’s vaulters need to be, at a minimum, in the 12-9 range, Howe said. At the 2019 MW championships, the eighth-place finisher cleared 12-11. Local athletes and potential recruits are now projecting to potentially be in that range with additional seasoning.

“It’s definitely something that has definitely gotten a lot more popular (locally),” Sanchez said. “I feel like people are starting to find a lot more interest in it.”

Stibley is a particularly interesting case.

Not only did she start her career as a walk-on, but she has improved on her best mark of her senior year in just two years. It is uncommon to improve that much in such a short period of time.

Though he coaches the event, Howe’s personal background isn’t in vaulting. He was an All-American triple jumper and long jumper during his Cowboys career. Sanchez and Stibley have never seen Howe actually attempt a vault, though Howe claims he has done it before.

Inexperience with the event hasn’t stopped Howe from teaching technique in the same way he would teach an event he competed in himself.

Potential for growth is only part of the equation when it comes to projecting vaulters at the college level. It comes down to coaching, too. Howe wants to be relatable in his methods, whether he’s coaching a triple jumper or a pole vaulter.

“It just makes a lot of sense (when he coaches),” Sanchez said.

For Howe, a jump is a jump. The only thing that changes is what your body does after launch. What he focuses on are the variables: pole length, pole stiffness, weather conditions, and so on. Howe’s goal is to control the controllable and have a game plan for the things that can’t be prepared for.

Stibley’s growth since joining the team was the admittedly frustrating culmination of months of work with Howe. Howe says the meat of the work focused on her approach and speed.

Stibley elaborated in a bit more detail – she wasn’t allowed to hold a pole and vault at all until she got her footwork down. It took two months.

Stibley had a bad habit she picked up years ago. When starting a vault, jumpers are supposed to drop the pole on the final two steps of the run up, Stibley said. She, however, was dropping it earlier on the final four steps, causing her to lose speed.

Stibley said she never changed the approach during her Natrona days because she was too stubborn. But there’s nothing like the threat of not being able to jump to get you focused on the little details.

“I was always so hard-headed on the approach,” she said with a chuckle.

Attention to detail has paid dividends for Howe and Stibley, however, as has UW’s decision to reinvest in pole vaulting. Having two freshman on the school’s all-time list in the event is affirmation of that.

There is no point in having vaulters if you aren’t going to invest in them. If you do, however, the sky is the limit. It’s the type of choice a program has to consciously make.

“You don’t want to hold athletes back,” Howe said. “Are you doing them a service by keeping them on the team?”

There is also a sense of pride in being a part of a new era in UW track and field. Sanchez and Stibley didn’t really know their home-state university had the event they love so deeply. Now that they’re making history, it’s hard to imagine having not taken the plunge.

“I’m definitely glad that they’re starting pole vaulting,” Stibley said. “It’s so exciting, especially to be a part of it.”

Stibley has bigger personal goals in mind, too. Owning the school record is great, but she feels she has more in the tank. She knows she cleared 12-3 by a decent amount. There is still work to be done on her already promising career.

But Stibley admits she thinks about that fateful elevator ride rather frequently, how different her life might be if she hadn’t been encouraged to reach out to coaches. How she didn’t know she’d ever be a college pole vaulter.

What a difference a couple of years makes.

“I think about that all the time,” she said. “If I miss that moment, in that time, I wouldn’t have emailed the coaches and known there was a pole vaulting team.”