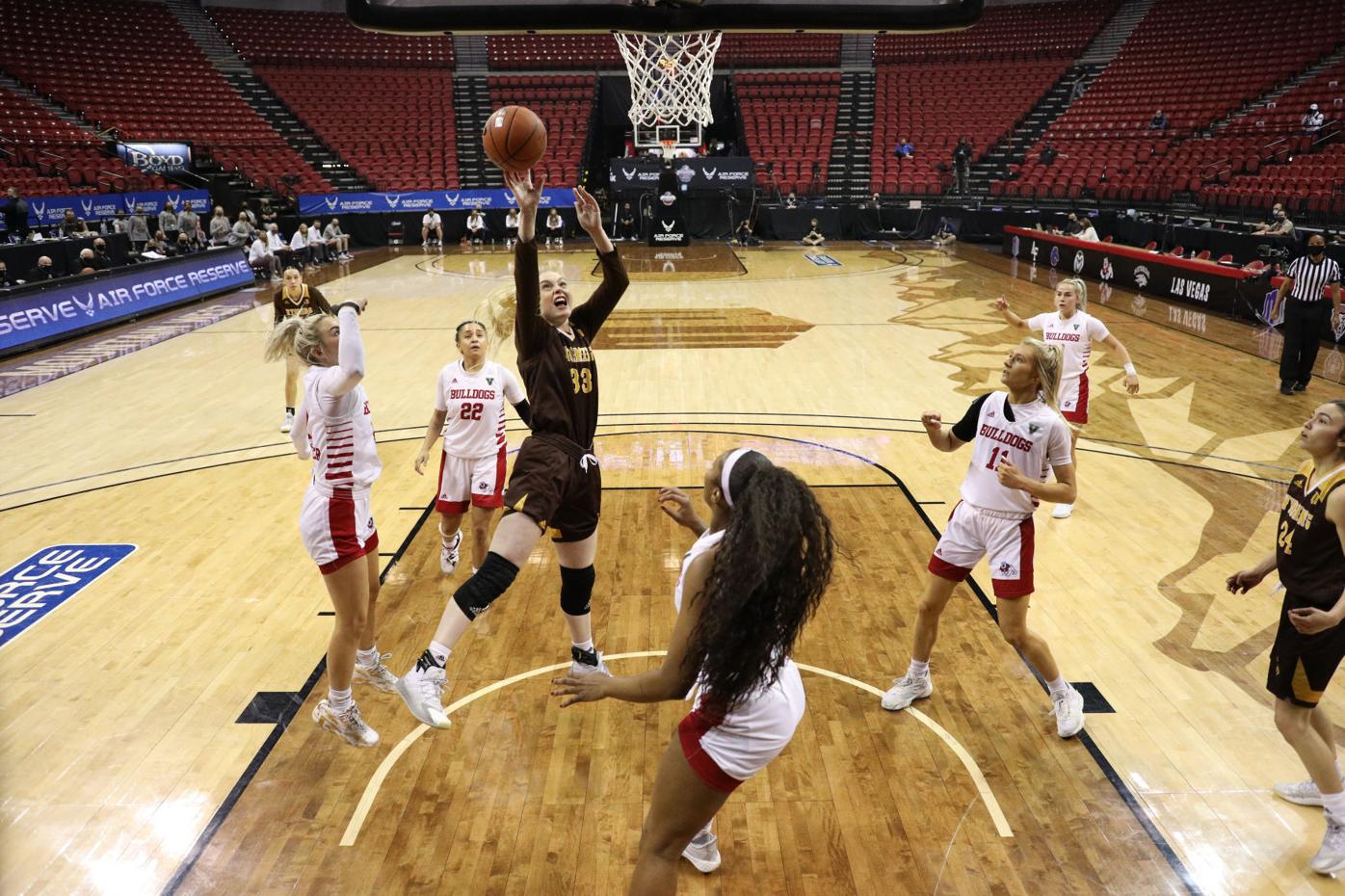 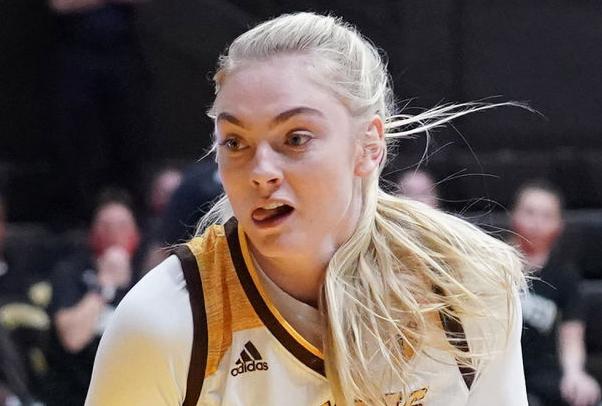 University of Wyoming graduate transfer Dagny Davidsdottir has been a perfect fit for Laramie and the Cowgirls. Troy Babbitt/UW Media-Athletics 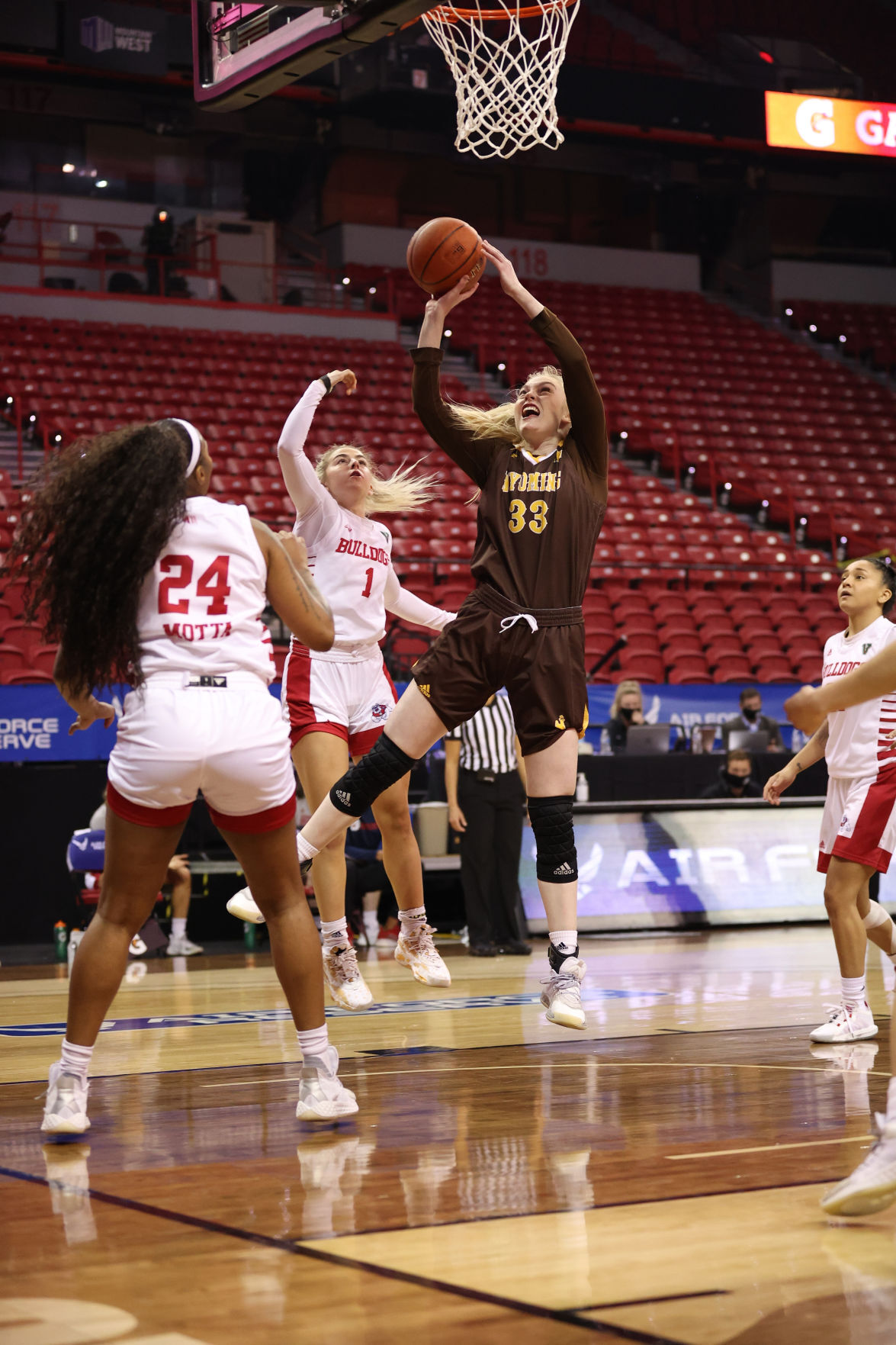 University of Wyoming graduate transfer Dagny Davidsdottir has been a perfect fit for Laramie and the Cowgirls. Troy Babbitt/UW Media-Athletics

LARAMIE – Despite the fact she grew up nearly 3,000 miles from the United States Capitol, Dagny Davidsdottir always knew she would end up in America one day. Even if her own mother didn’t necessarily believe it, the University of Wyoming forward has always had big dreams.

Davidsdottir, a graduate transfer from Niagara University and a native of Iceland, has been in Laramie for less than a year. But she made her presence felt for the Mountain West champion Cowgirls from day one, averaging 8.8 points and 5.5 rebounds per game, good for fourth and second on the team, respectively.

The seventh-seeded Cowgirls (14-9) made a historically unprecedented run in last week’s Mountain West Tournament, winning four games in four days. They became the lowest-seeded team in tournament history to win the conference, defeating No. 4 seed Fresno State 59-56 in an exhilarating championship bout. It was the first Mountain West title in program history, and just the second conference title, regular season or tournament, in program history.

The 14th-seeded Cowgirls will play third-seeded UCLA (16-5) in the tournament’s opening round Monday night in Austin, Texas.

Davidsdottir started every game this season and played an important role in UW’s tournament title run, including a 15-point effort in a semifinal victory over four-time defending conference champion Boise State.

Walking around the team hotel in Texas this week, surrounded by the best teams and players in college basketball, Davidsdottir admittedly had one of those “Is this really happening?” moments: The hotel’s signs said it was completely booked for participating teams only.

Davidsdottir said she’s had nights recently where she replayed the entire Fresno State game back in her head: the cheering, the hugging, the picture with the trophy. It all played back like a documentary every time she closed her eyes to try to get some sleep.

But that stroll through the hotel lobby hit differently.

“It literally said ‘No vacancy.” (And I thought) ‘Wait this is, like, for me. This is for us. I’m supposed to be here,’” Davidsdottir said.

Davidsdottir’s journey to Wyoming was one of chance, perseverance and, above all else, faith.

Playing in her fifth and final year of college basketball – she is currently finishing up her second master’s degree and plans on finding a job back home in Iceland when she finishes the semester – she’s more than made her mark.

“I knew with her personality she was going to do really, really well with the people, because she’s just a great person to talk to. I just thought it was going to be a really good fit,” Cowgirls coach Gerald Mattinson said.

““Everything worked out. It worked out for her … and definitely has worked out well for us,” Mattinson said.

Davidsdottir’s unlikely path to America started with a basketball camp she attended when she was seven or so. Davidsdottir is from Hveragerdi, Iceland, a town of less than 3,000 people. You grow up playing one of three sports in Iceland, she said: handball, soccer or, to a lesser extent, basketball.

As a child, she took part in a camp where one of the people running it was a former college basketball player in the United States. Davidsdottir had no clue that was a thing people did, going to a university to play a beloved sport. She played all three popular sports growing up, but basketball was her love: the teamwork, the camaraderie, it was all the things she wanted to be part of.

Getting recruited for college basketball out of Iceland was going to be nearly impossible, however. There isn’t a ton of opportunity for exposure.

After she got home from that camp, Davidsdottir walked into her family’s home and made a proclamation to her mother: she was going to be a college basketball player. Her mother sort of nodded, somewhat brushing it off as a young girl’s pipe dream.

“I sat in the kitchen and said, ‘I’m going to play college basketball, and I’m going to America,’” Davidsdottir said.

That dream started turning into a reality when Davidsdottir was just 17. She moved, by herself, to The Westtown School, a boarding school in Pennsylvania. It was difficult, to be sure, but it was a good transition into what she expected in college. It was a chance to live with other people and brush up on English, which she didn’t start learning until she was in seventh grade.

Whatever got her closer to her goal of playing college basketball was what she was going to do.

That grit paid off, as she made her way to New York to play at Niagara, a Division I program in the Metro Atlantic Athletic Conference. Davidsdottir spent four years at Niagara, serving as a captain her final season while earning her bachelor’s degree, as well as a master’s degree.

But at the end of her redshirt junior season, she came to a realization: everyone she had come in with as a freshman was going to be gone, and there weren’t any other degrees she really wanted to earn at Niagara. She contemplated whether it was time for her college basketball career to come to a close.

She knew in her heart it wasn’t. It was simply time to find somewhere else to play.

“I felt this overwhelming feeling ‘I’m not done with basketball,’” she said. “I just felt like I wasn’t ready. I wasn’t done.”

“There’s no way I could go somewhere else”

Getting recruited during a pandemic certainly isn’t optimal. But FaceTime chats showing off campus locations and phone calls help make things a bit easier, even if the head coach of the team you’re potentially choosing pronounces your name incorrectly during your recruitment.

Davidsdottir said she wanted to go to a bigger school than Niagara, which has an undergraduate population of less than 3,000 students. She also wanted to move out West, given that the farthest she had ever been was Texas.

She was in touch with UW assistant Ryan Larsen, who laid out the facts quite bluntly: Laramie was not a big city. There aren’t a ton of things to do in terms of entertainment. And it gets really, really cold. That wasn’t anything new for Davidsdottir.

“Ryan told me, I’m going to be straight up with you … you’re not going to the mall on the weekend. It sounds like home,” she said with a laugh. “I come from a small town, there’s no mall, (and) it gets cold.”

Wyoming checked all the boxes, but there was still a matter of fit with coaches and players.

Among a number of conversations Davidsdottir had with Mattinson, one sticks out clearly as the one that sold her.

During a conversation, Mattinson bluntly asked Davidsdottir a question: “Why would I want you?” Davidsdottir answered simply: “Because I want to win.”

The rest was history.

“He stopped me and said, ‘That’s all I need to hear,’” Davidsdottir said.

As it turned out, Davidsdottir was what Mattinson likes to call a “good environmental fit”; it was love at first sight. She’s from a small town, and she’s used to cold weather. She is a people person who can strike up conversation with just about anyone. The puzzle pieces fit together almost perfectly.

That became abundantly clear during a visit she had with the coaching staff, where Davidsdottir didn’t want to correct Mattinson on pronouncing her name wrong.

“When you look at her name, to me, it looks like ‘Dag-nee,’ right? So she lets us go on recruiting her, and I’m sitting there calling her ‘Dag-nee,’” Mattinson said. “And then finally one day I thought, you know, I better ask her this … she said, “No, my name is pronounced ‘Dye-nee.’ And I said, ‘Why would you let us pronounce your name wrong through the whole process?’ And she says, ‘Well, I figured you were close enough, and you seemed nice, and that was OK.’

“That’s just the kind of person she is.”

While the 2020-21 regular season was a roller coaster of sorts for UW, with the team losing eight of its nine games by single digits, the Cowgirls started getting things going, particularly on offense, in the final few games before the conference tournament.

Despite a gap of three weeks due to COVID-19 cancellations with opposing teams, the Cowgirls carried their momentum into the Mountain West Tournament, where they emerged with the second NCAA Tournament bid in program history.

Davidsdottir has actually thought there must be another game to play in order to win the Mountain West. She has had to pinch herself on more than one occasion. It still doesn’t seem completely real.

And that realization, that she accomplished everything she wanted to in her one season with the Cowgirls, is part of why she’s OK saying goodbye to college basketball.

The NCAA is allowing all players to retain a year of eligibility due to the pandemic, meaning Davidsdottir could come back for a sixth season. She gave it a bit of thought, but ultimately came to a conclusion: she is going to be 25 years old, will have two master’s degrees (she is finishing up her master’s in finance this spring) and can say she is a champion.

There’s temptation to try and repeat, of course, with the core of the Cowgirls returning in 2021-22. But Davidsdottir thinks it’s time to ride off into the sunset.

She doesn’t want to be completely done with basketball, however. When she finds a job in finance in Iceland, she wants to stay active within the basketball community, whether it be coaching or playing for a club team in her old league.

But as she prepares to lace up her shoes to take on the ninth-ranked Bruins on Monday, Davidsdottir can’t help but look back with fondness on her lone year in Wyoming. And she really hopes this isn’t the last time she ever dons brown and gold.

Because after this season, she couldn’t imagine ever putting on a different college jersey.

“There’s no way I could go somewhere else and have a better experience,” Davidsdottir said. “(But) I hope it’s not our last one.”