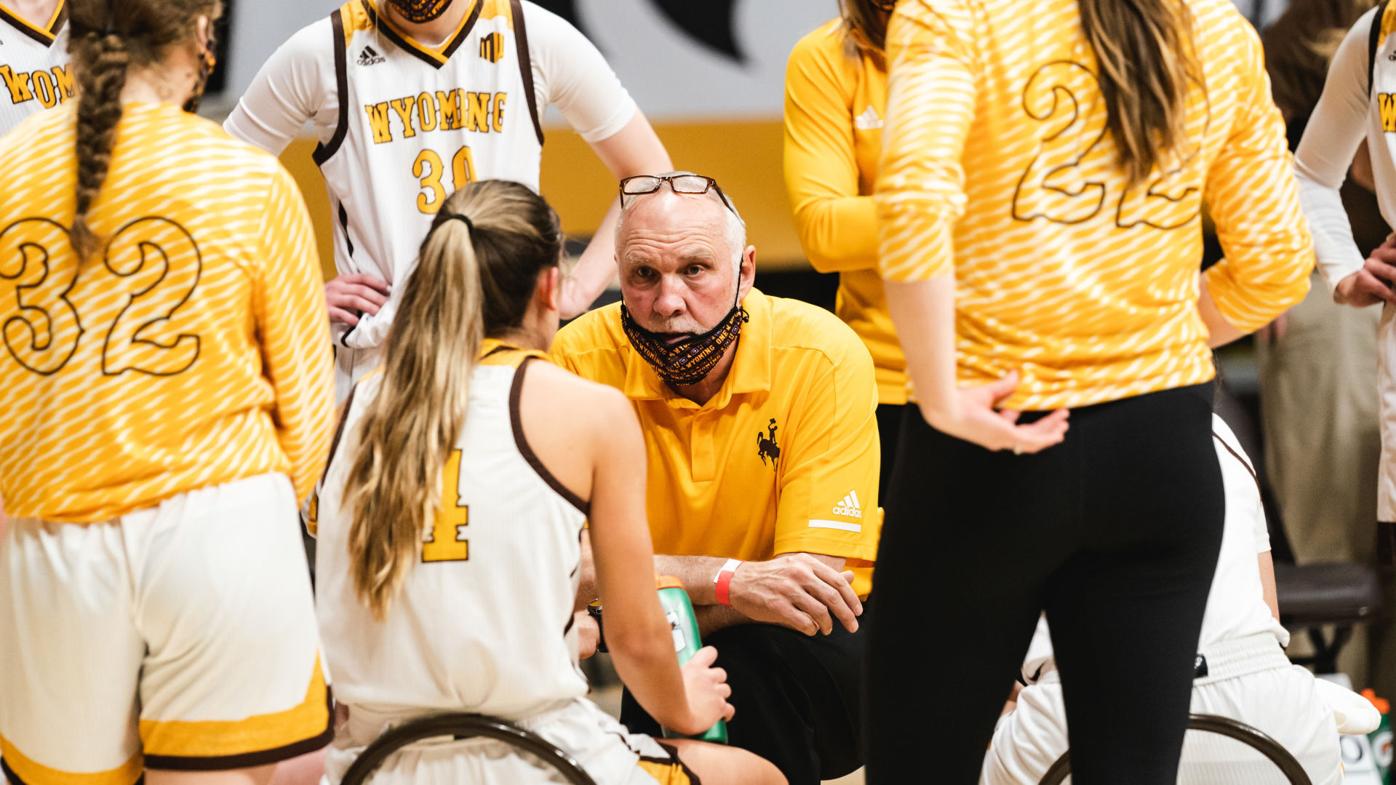 University of Wyoming women’s basketball coach Gerald Mattinson, center, talks to his team during the Cowgirls’ 89-50 loss to Gonzaga on Tuesday, Dec. 8, 2020. The Cowgirls have been trying to overcome their offensive struggles. 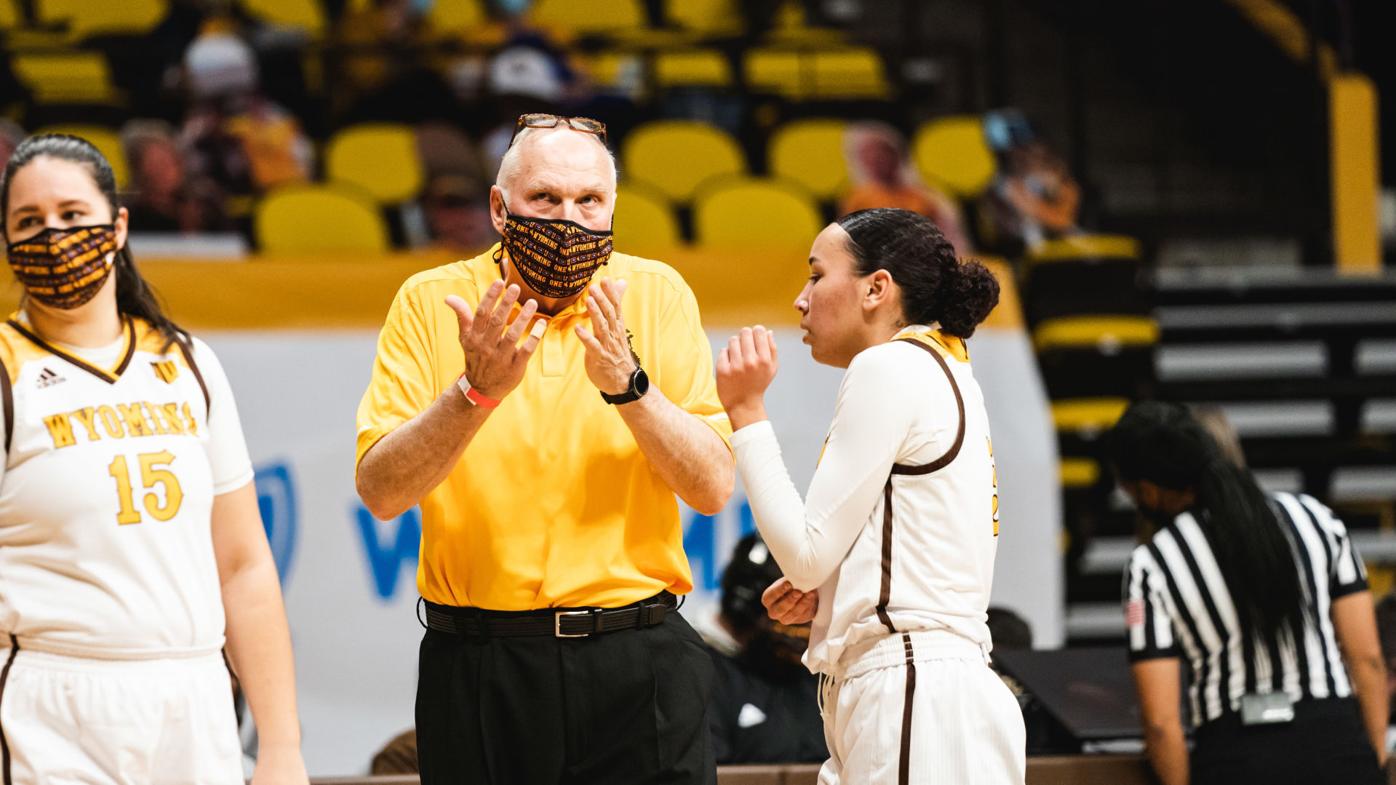 University of Wyoming women’s basketball coach Gerald Mattinson, center, talks to senior Jaye Johnson, right during the Cowgirls’ 89-50 loss to Gonzaga on Tuesday, Dec. 8, 2020. The Cowgirls have been trying to overcome their offensive struggles.

University of Wyoming women’s basketball coach Gerald Mattinson, center, talks to his team during the Cowgirls’ 89-50 loss to Gonzaga on Tuesday, Dec. 8, 2020. The Cowgirls have been trying to overcome their offensive struggles.

University of Wyoming women’s basketball coach Gerald Mattinson, center, talks to senior Jaye Johnson, right during the Cowgirls’ 89-50 loss to Gonzaga on Tuesday, Dec. 8, 2020. The Cowgirls have been trying to overcome their offensive struggles.

CHEYENNE – Gerald Mattinson always emphasizes that his players should find their roles on the team and excel at them.

Fourteen games into the 21-game regular season, the second-year University of Wyoming women’s basketball coach still knows there are roles to be found.

“I don’t think we have (found all of our roles) yet,” Mattinson said Thursday. “We’ve found our role defensively as a team … when you talk about defining roles, we have to find out who we are offensively, and we haven’t found that yet.”

The Cowgirls (7-7 overall, 5-6 Mountain West) are coming off a win over San Diego State on Thursday night that snapped a two-game losing streak. It was another subpar offensive performance for UW. The team only shot 36% from the field and went 1-21 from the perimeter. But its defensive presence made up for it.

While the individual defensive roles and the team defense is pretty much set in stone, the offense continues to struggle. When it seemed some consistency was starting to show itself on the offensive side of the ball a few weeks ago, the Cowgirls were then back to struggling to find that consistent offense.

If one or two players have a good game offensively, the rest of the team can’t find the bottom of the net. The scenario has rotated throughout UW’s players over the course of the season.

Thursday night’s win was a prime example. The Cowgirls had strong offensive performances from their post players in fifth-year senior Dagny Davidsdottir and freshman Marta Savic. Davidsdottir scored a career-high 19 points, and Savic also finished with a career-high 12 points. No one else scored more than six.

“We can’t get three or four kids consistently scoring at a high enough rate for us right now,” Mattinson said. “And we have to figure that out and be able to do that in order to start closing out these close games.”

There are three weeks left in the regular season for the Cowgirls to figure out their offensive roles and click consistently on that side of the ball before the MW conference tournament. Once they put it together, they’ll be tough to beat.

“We’ve established who we are defensively, and we’re still trying to figure out who we are offensively,” Mattinson said. “But I’ve been saying that once we do, we’re really going to break out.”

It seems like UW is getting close to that point of breaking out. Savic and Davidsdottir are gradually improving in the post, and UW’s other players have proven that they have the ability to put points on the board. Maybe that breakout game could happen today, as the Cowgirls host the Aztecs for the second matchup in their two-game series.

A new member of the roster, Davidsdottir has been working to find what she can bring to the table since before the season started. She and the rest of the team are on the brink of eclipsing their certain niches.

“I spent most of the fall finding where I fit on the team, figuring out what’s needed, and finding what I can bring to the team and what others do better,” Davidsdottir said. “… But, like coach always says, when we all find our roles and excel, we can be special.”