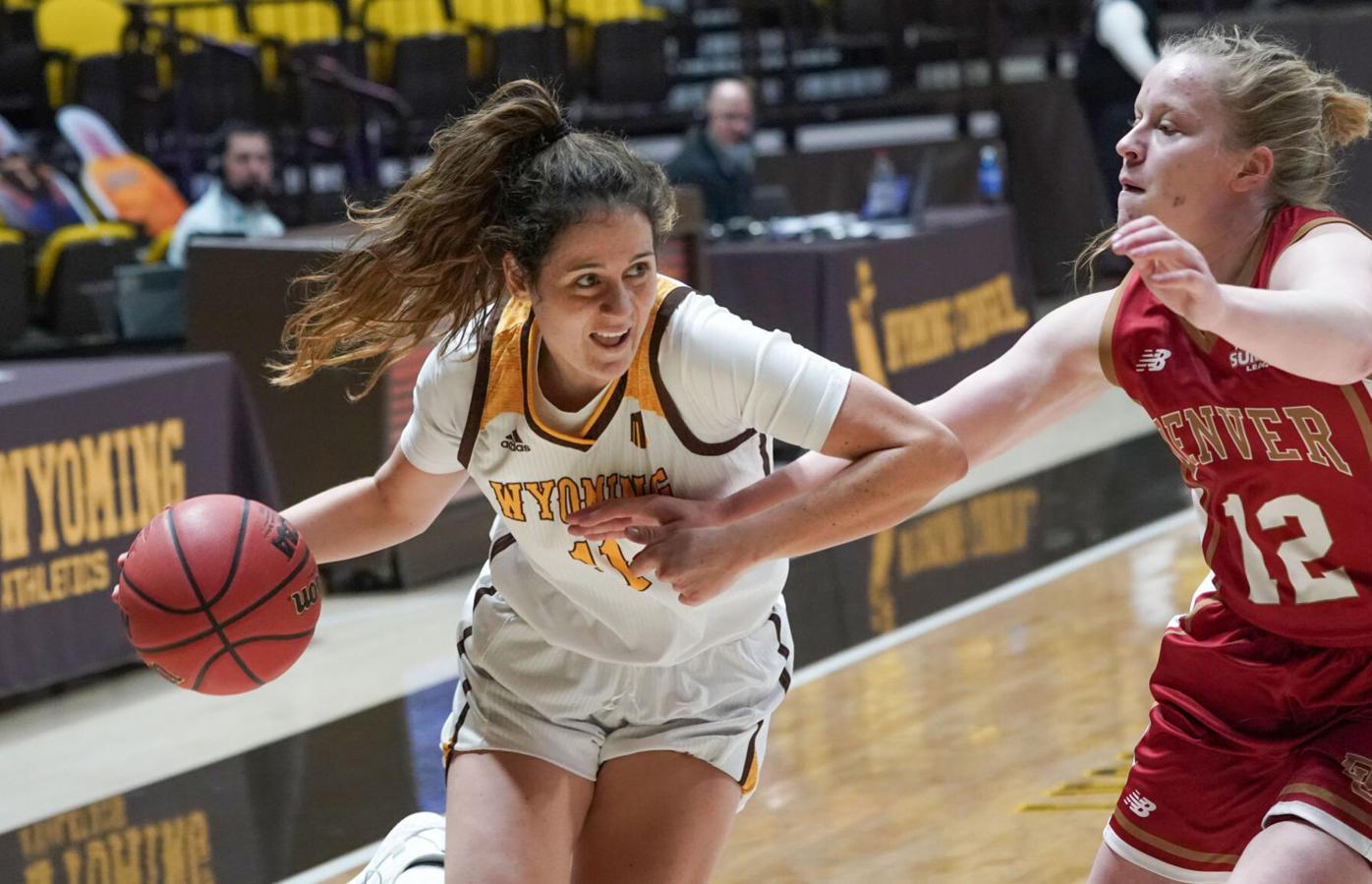 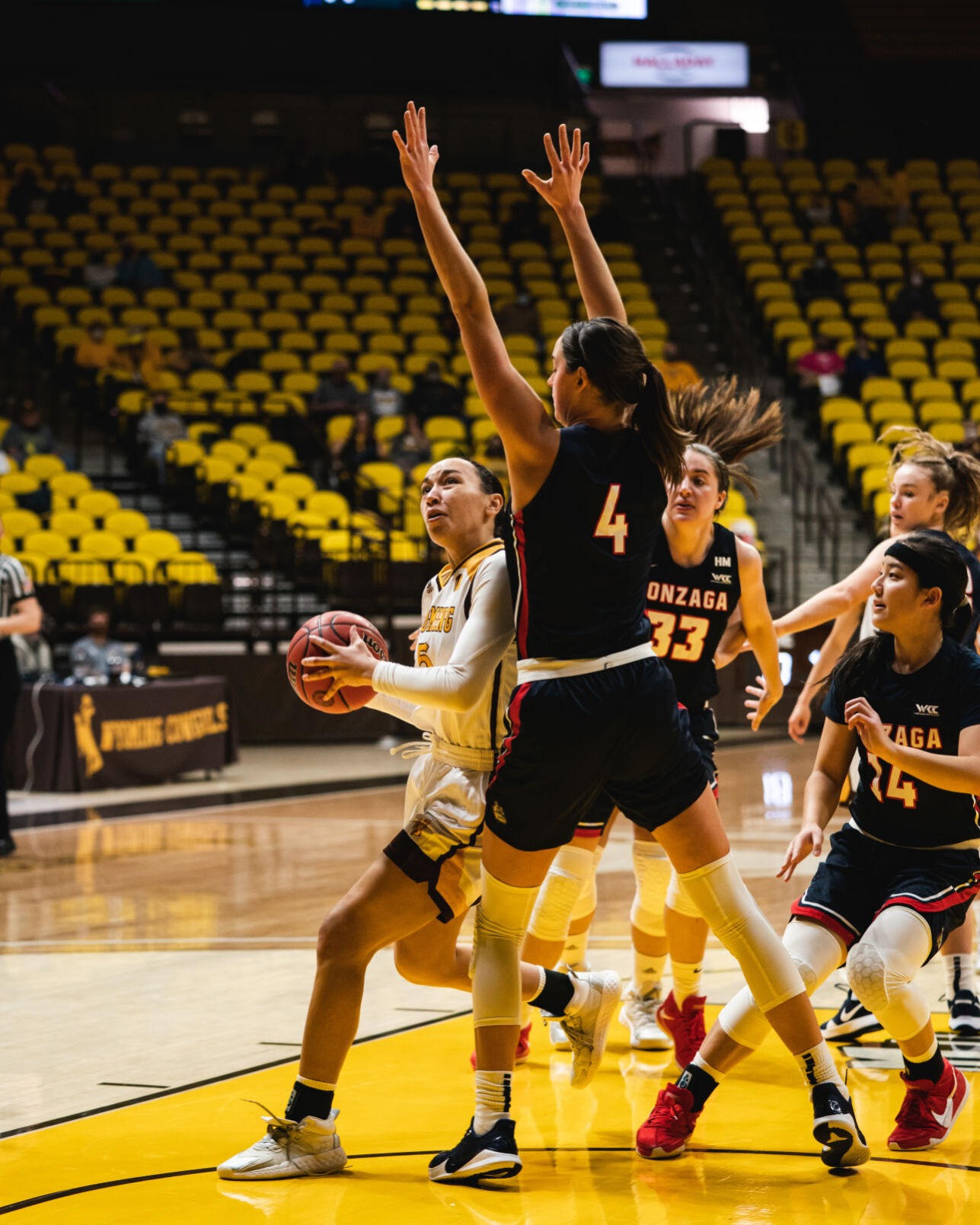 University of Wyoming’s Jaye Johnson drives the lane during the Cowgirls’ 89-50 loss to Gonzaga on Tuesday, Dec. 8, 2020, at the Arena-Auditorium in Laramie. The Cowgirls are looking for the sweep over Utah State today.

University of Wyoming’s Jaye Johnson drives the lane during the Cowgirls’ 89-50 loss to Gonzaga on Tuesday, Dec. 8, 2020, at the Arena-Auditorium in Laramie. The Cowgirls are looking for the sweep over Utah State today.

LARAMIE – The old adage of “It isn’t how you start, it’s how you finish” doesn’t necessarily ring true for the University of Wyoming women’s basketball team.

Sure, closing out games is crucial. It was the margin between narrow defeats at Colorado State last weekend.

But if the Cowgirls can get off to hot starts in the first and third quarters going into the stretch of their season, they have to like their odds in the coming games. Utah State learned that the hard way Thursday night.

In a dominant 68-56 win over the Aggies earlier this week, UW (9-9 overall, 7-8 Mountain West) started the first and third quarters on 9-2 and 11-2 runs, respectively. While things got a bit close in the second and fourth quarters, the opening of each half essentially put the game out of reach regardless of how hard Utah State (4-12, 2-9) battled back.

“Halftime is always very helpful to us, just to regroup a little bit, talk about what we have to do better, what we have to focus on” senior forward Dagny Davidsdottir, who scored eight of her 14 points in a dominant first quarter, said. “In the third quarter, we just came out really strong, really fast. One of the things that we talked about in halftime was to just keep them off the scoreboard, basically. So I think that really worked for us.”

Not much went right for Utah State offensively during any point of the game, but when the Aggies were getting hot, it was due to 3-point shooting. The Aggies hit eight shots from deep, with five coming in the first and third quarters.

If the first quarter belonged to Davidsdottir offensively, the third belonged to sophomore guard McKinley Bradshaw, who was 4-of-5 shooting and scored 10 of her team-high 18 in the period. Bradshaw did all of her scoring in just 23 minutes off the bench.

Ten of UW’s 18 third-quarter points came inside the paint.

“That’s something we talk about here on a regular basis,” UW coach Gerald Mattinson said. “We were able to win both of those intervals. We lost the second quarter, so we talked about coming out and really, really playing well.

“I thought we were good defensively then, and I thought that led to some easy baskets.”

The Cowgirls finish up their series with the Aggies today before ending their regular-season slate of games next week at home against New Mexico. UW was supposed to play San Jose State the following week, but the Spartans opted out of the remainder of the season.

While UW has had issues scoring at times this season, things have started to come together in recent games, averaging 64 points per game in their last four. Prior to this stretch, the Cowgirls had failed to score 60 points in any of the five previous contests.

The Pokes’ defense has been stellar all season. The offense coming around in recent weeks, however, is a pleasant update, though Mattinson would like to see his team close out games better when at all possible.

Even in a dominant win over the Aggies where the Cowgirls never trailed, Mattinson finds things to work on.

“(We) had some opportunities to really put them away, and (I’m) not pleased that we didn’t take advantage of that,” Mattinson said.